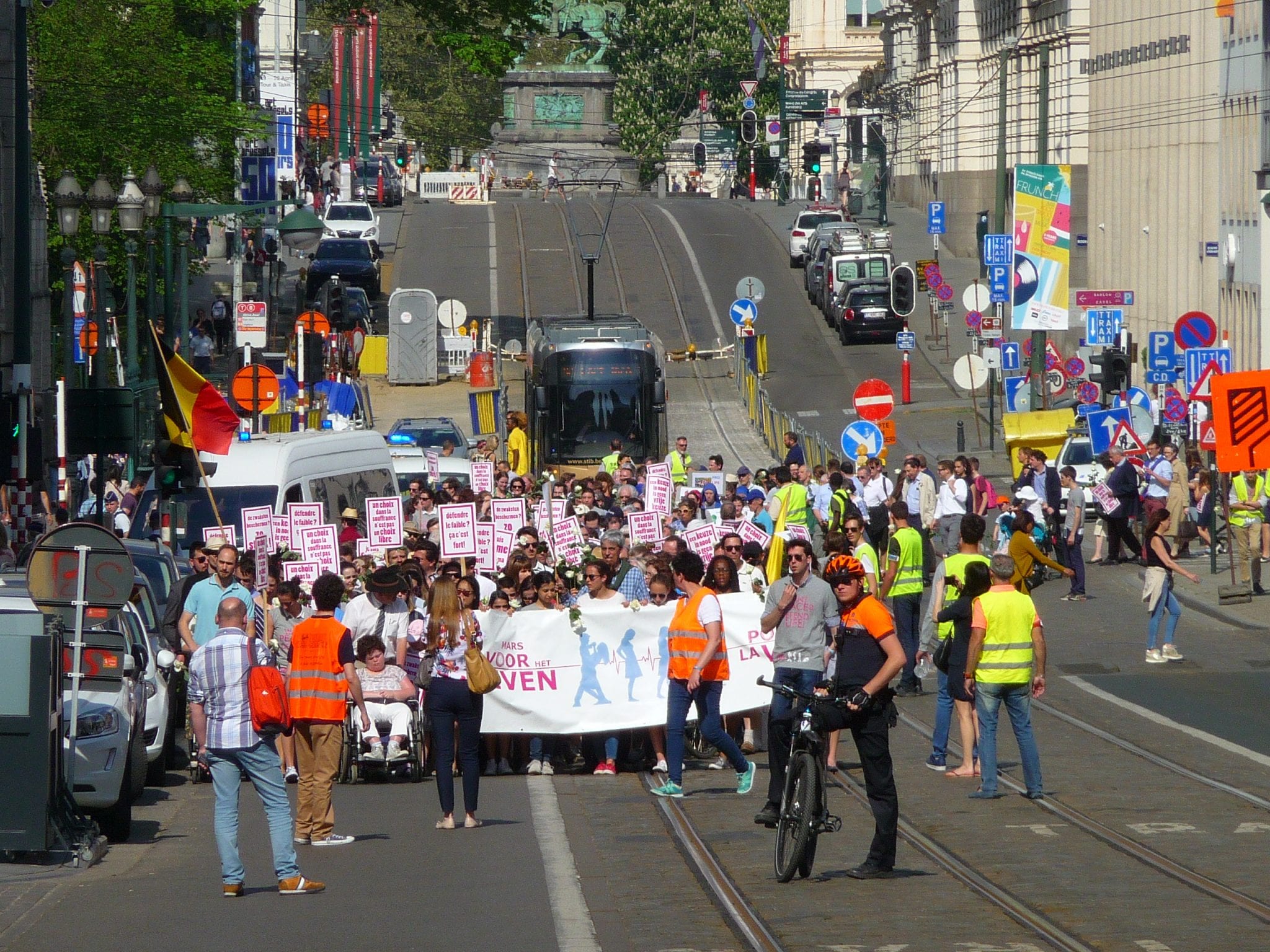 A few years ago, a Dutch doctor attended her elderly Alzheimer’s disease patient at a nursing home. The doctor’s purpose wasn’t to examine the patient or prescribe new medicines. Rather, she was there to kill.

While competent, the patient asked to be euthanized when incapacitated, but she also instructed that she be allowed to say when. But before she did that, the doctor and her family decided that her time had come. The doctor drugged the woman’s coffee and, once she was asleep, began the lethal injection procedure. But the patient awakened unexpectedly and fought against being killed. Rather than stopping, the doctor instructed the family to hold the struggling woman down while she completed the homicide.

This would seem to be a clear-cut case of murder. But a judge recently exonerated and praised the doctor for acting in the “best interests” of the patient by merely executing the woman’s previously stated wishes. In other words, the judge essentially ruled that the struggling patient was no longer competent to want to stay alive.

The only unusual aspect of the “Case of the Struggling Alzheimer’s Patient” was the struggle. Even when incompetent and unable to make their own decisions, the law of Netherlands and Belgium allows dementia patients to be killed by doctors if they so order in written advance directives.

Both countries also allow mentally ill patients who ask to die to be euthanized. Such procedures are not rare. According to government statistics, in 2017, Dutch psychiatrists and doctors euthanized 83 mentally ill patients. Sometimes these legal homicides are accompanied by consensual organ harvesting after death. One case — reported in an international transplant medical journal — involved a self-harmer (or “auto-mutilator”) for whom doctors applied the ultimate harm as a “treatment.” Without criticism — or even a moment’s reflection about the moral questions raised by such an act — the medical journal reported approvingly that the lungs of the deceased psychiatric patient were well accepted by their recipients.

The Supreme Court of Switzerland, a country that permits assisted suicide clinics — ruled several years ago that the mentally ill have a constitutional right to access death. Accordingly, there are many verified cases of the non-physically ill being assisted to kill themselves — including an elderly woman who wanted to die because she had lost her looks.

Canada, which recently legalized lethal injection euthanasia for those whose deaths are “reasonably foreseeable,” now is debating expanding the right to be killed to those whose lives are not in danger. Prime Minister Justin Trudeau is on record as favoring liberalization and has stated his government will not appeal a recent court ruling declaring the foreseeable death limitation to be unconstitutionally restrictive and discriminatory.

How far is the expansion likely to go? Many Canadian euthanasia advocates are pushing for revisions that would allow people with mental illnesses and dementia to be killed by doctors in the same manner as now allowed in the Netherlands and Belgium. And here’s some breaking news: the Alzheimer Society of Canada — which is supposed to advocate for the welfare of such patients — has officially endorsed allowing euthanasia by advance directive. This means that even if the incompetent patient is not suffering — perhaps even if he or she expresses no desire to die — their former self’s decision trumps the current self’s needs and desires.

Meanwhile, there has already been at least one depressed Canadian apparently euthanized at his request even though his death was not foreseeable. The man’s family even begged doctors to spare his life, but to no avail.

What about the U.S.? Would we ever follow such a course? As of now, the nine states and the District of Columbia that have legalized assisted suicide limit access to patients who are terminally ill. But that’s more a political expediency than a principled limitation. Indeed, restricting assisted suicide to the dying is philosophically unsustainable.

Think about it. If the point of allowing suicide by doctor is to eliminate suffering — and if eliminating suffering can include eliminating the sufferer — how can facilitated death be forbidden to patients, such as those with dementia and mental illness, who may suffer far more extremely and for a much longer time than the already dying? It makes no sense.

Despite continuing disapproval of euthanasia for mental illness by the American Psychiatric Association, that point is increasingly being made in the media and professional journals. For example, an article just published in the American Journal of Bioethics argues that since “the suffering associated with mental illness can be as severe, intractable, and prolonged as the suffering due to physical illness,” as a matter of “parity,” in “severe” cases, “PAD” (physician-assisted death) should be made available to mentally ill patients with “decisional capacity” — even when they have “a relatively long expected natural lifespan.” The authors, University of Utah psychiatry professor Brent M. Kious and noted assisted suicide advocate and bioethicist Margaret (Peggy) Battin, go so far as to suggest that “psychiatrists and other mental health professionals” could one day become “gatekeepers for PAD” once “a metric for suffering in both mental and physical illness” is established.

Ponder this for a moment. Instead of being duty-bound to save the lives of all their suicidal patients, mental health professionals would become approvers for and facilitators of self-destruction. That should be unthinkable.

Alas, the first small legal steps toward permitting the demented and mentally ill to access suicide by doctor have already been taken. After California legalized assisted suicide for the terminally ill, the Department of State Hospitals promulgated a regulation requiring that patients who have been involuntarily committed — and who have become terminally ill — be provided access to assisted suicide despite their mental illness. By definition such people are not legally competent, or else why would they be involuntary hospitalized?

Meanwhile, Nevada just enacted a law that allows dementia patients to instruct caregivers to withhold “food and water” once they reach incapacity toward the end that they starve to death. Please note that this first-of-a-kind law isn’t about refusing a feeding tube or preventing force-feeding. Rather, the law (SB 121) permits patients to order their future selves to be refused “food and water” — even if they willingly eat, perhaps even if they ask caregivers for sustenance. That’s homicide by neglect.

Don’t take my word for it. The influential bioethicist Thaddeus Mason Pope wrote about the law:

Even after we stop offering food and fluids, other problems may arise. Most problematically, the patient may make gestures or utterances that seem to contradict her prior instructions [to be starved]. Does such communication revoke the advance directive? A recent court case from the Netherlands suggests the answer is “no.” Once the patient reaches late-stage dementia, she is unable to knowingly and voluntarily revoke decisions she made with capacity. But the answer remains uncertain in the United States.

In other words, Pope believes that a court could one day rule that an advanced dementia patient isn’t “competent” to want to eat.

Of course, the point of such advocacy isn’t really starvation but convincing people to allow intentional overdosing of these vulnerable patients by doctors. After all, if we are going to end their lives, the reasoning goes, we should at least do it humanely. If we accept the propriety of intentionally ending dementia patients’ lives based on their prior instructions, that argument certainly has emotional appeal.

Accelerating advocacy for legalizing euthanasia is pushing us toward making a stark choice. We can decide that assisted suicide is an acceptable response to human suffering, allowing people to die — but also unleashing gravitational forces of logic that will lead inexorably (over time) to a broader killing license, including of the killing of dementia and mentally ill patients as advocated by Kious and Battin. Or, we can focus instead on suicide prevention in all cases. Such caring takes more time, commitment, and resources, but better exemplifies true “compassion,” the root meaning of which, after all, is to “suffer with.”

Kious and Battin are on the mirror opposite side from me in the euthanasia debate, but we agree that there is no such thing as a “little” euthanasia: In for a penny is in for a dollar. Those with eyes to see, let them see.