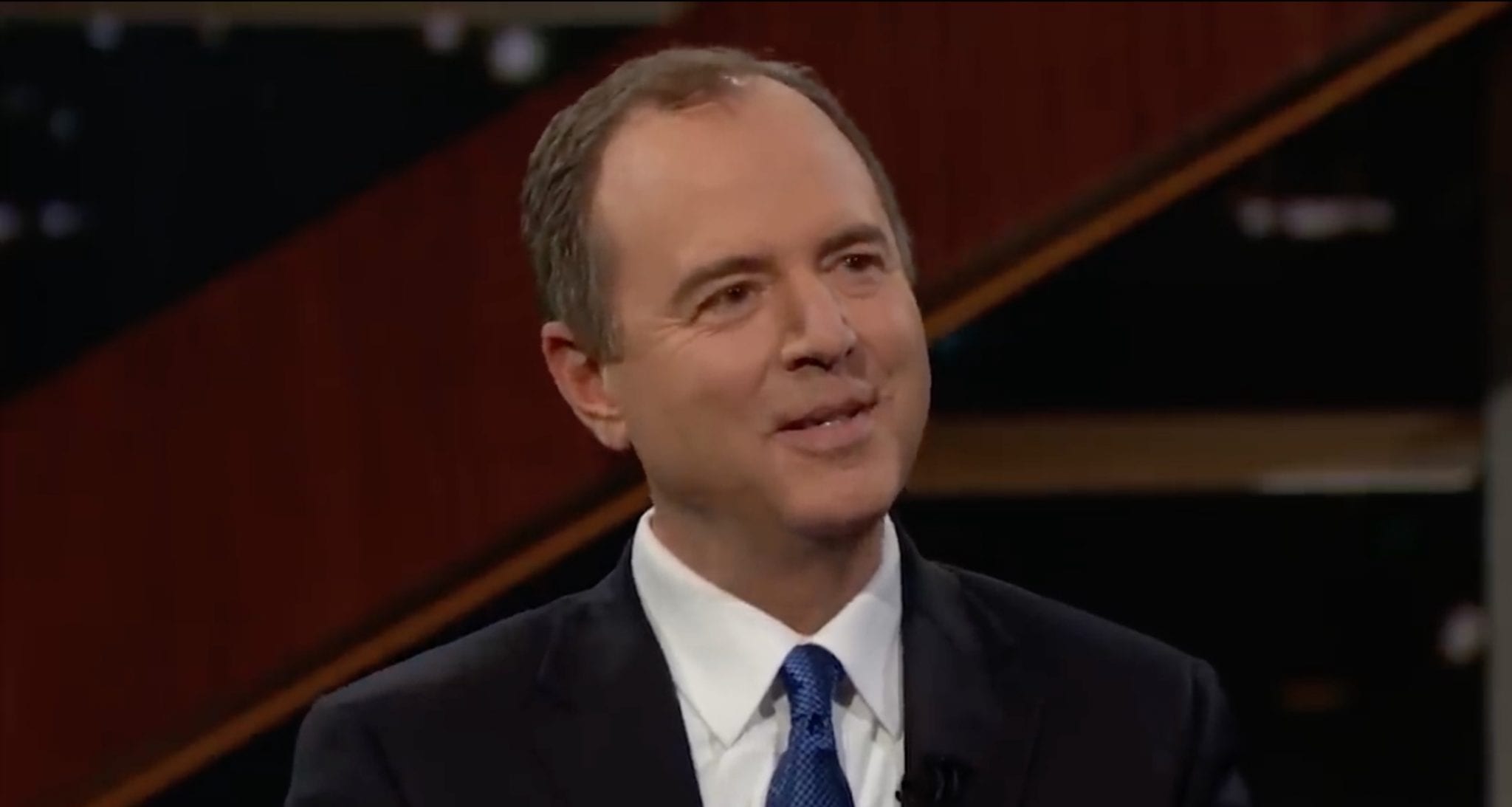 The offer from Sean Hannity could not be more plain.

“Do you get invited on Fox News?”

To which Schiff responded that, in fact, yes he does. He then admitted that Hannity invites him on his show “a lot.”

But curiously, Schiff doesn’t accept Hannity’s repeated invitations, although he has appeared on other shows on the network. Schiff’s stunned surprise was visible when Maher urged him to go on Hannity’s show. “You should go.” And of the massive Hannity and Fox audience Maher added: “That’s who needs to hear your message. You gotta get in the bubble, man.”

Hearing this over in Hanoi, Hannity quickly responded this way, as reported in theHill:

“Bill, thank you. He needs to come. We invited him,” Hannity said after Maher said on his HBO program on Friday that Schiff needed to go on Fox News more often.

“I agree with Bill Maher. You know what? Congressman Schiff, an hour. Mano a mano. Let’s go. And I will point out all the lies, all the misinformation and propaganda you have been pushing for two years.”

So the question recurs: Will Adam Schiff have the guts to go on Sean Hannity’s show? Will he go one-on-one with Hannity for an entire hour — the latter who has spent one show after another for two years-plus investigating and reporting in detail on the considerable behind-the-scenes chicanery of all the Deep State actors in the anti-Trump guerrilla war?

In fact, there are a couple someone else’s who need to man up and spend time talking to Hannity. That would be, of course, fired FBI Director James Comey and his also fired Deputy FBI Director Andrew McCabe.

There is no coincidence in the fact that both Comey and McCabe had and have books out — but their massive television roll-outs mysteriously seem to miss Hannity. The glaring reality here is that both men — like Congressman Schiff — run like rabbits to avoid the grilling that would await them on the Hannity show. Why?

For any sentient person the answer is obvious. In a modern-day replay of the famed Woodward and Bernstein tale of Watergate — All the President’s Men — Sean Hannity is Ben Bradlee. Bradlee, of course, was the famed Washington Post editor who gave his two young investigative reporters plenty of space on the Post’s front page to unravel the complexities of Watergate. Hannity is the Fox host who has used both his TV and radio shows to provide a forum for investigative journalists with names like Sara Carter (now a Fox contributor), the Hill’s John Solomon, and Fox’s own Gregg Jarrett to thoroughly document their findings of Deep State shenanigans. Uncovering, in the process, a scandal that many observers believe is far worse than Watergate.

Did Richard Nixon ever sit down for a detailed interview with Woodward and Bernstein? Are you kidding? Nixon wouldn’t do that for the very same reason Adam Schiff balks at the idea of sitting down with Hannity. It is the same reason that neither Comey or McCabe have volunteered to venture into Hannity’s presence. Decades ago when a prominent Democratic politician of the day — no less than Senator Robert F. Kennedy — refused an invitation to debate with conservative star William F. Buckley, Jr. on the latter’s PBS show Firing Line, Buckley was asked why he thought Kennedy refused. To which, in total Buckley style, he grinned that big smile and replied: “Why does baloney reject the grinder?”

Which is to say, Hannity and company have the goods on these people. Schiff can go on and on with credulous others peddling his baloney about Trump-Russia collusion, and get away with producing zero evidence. But sit down and face the Sean Hannity grinder? To sit still on camera for a challenge about, say, his own attempt at Russian collusion as hilariously recorded in a taped conversation between Schiff and a supposed Russian “informant” — who turned out to be a prankster? No way Schiff will want to have Hannity play back that conversation on live Fox air for millions of Americans as Schiff sits there and is confronted with his own shady funny business. This kind of frank conversation would vividly illustrate that this whole Trump-Russia collusion business was a sham from the get-go, a hoax perpetrated by those intent on using their government positions to pull off a silent coup against the duly elected president they simply could not abide.

And a word to Bill Maher’s larger point. I myself have twice appeared on Bill’s show. And was grilled thoroughly about my support for President Trump. And… what? Unless one is willing to carry the flag of one’s belief’s into venues that oppose those beliefs, those beliefs are being done a disservice. It has always been the case that healthy, vigorous debate is good in a democracy. Abraham Lincoln and senatorial opponent Stephen Douglas understood that in those famous 1858 rounds of the Lincoln-Douglas debates, the two traveling to a series of Illinois towns for repeated, one-on-one detailed clashes on slavery and all manner of issues of the day was a necessary component of a democracy.

In today’s 21st century world of cable television the Hannity show has become a central stage for exactly this kind of back and forth.

It cannot be escaped that when one dodges — as Adam Schiff is clearly doing — there is every reason to believe he has something to hide, that he is frankly terrified of a detailed on-camera inquiry from someone who has been following his so-called “investigation” right from the very start. Which is why this particular baloney is rejecting the grinder.

So we shall see.

But whatever else is clear, if there is one area of commonality between Bill Maher and Sean Hannity it is that those who venture forth into the public arena have to have the guts to face tough questions from opponents.

So far, Adam Schiff has declined. Which, in fact and all by itself, says everything about the game-playing behind the entire Trump-Russia collusion hoax that you need to know.