by Paul Kengor
Ronald Reagan in a news conference in 1984 (mark reinstein/Shutterstock.com) 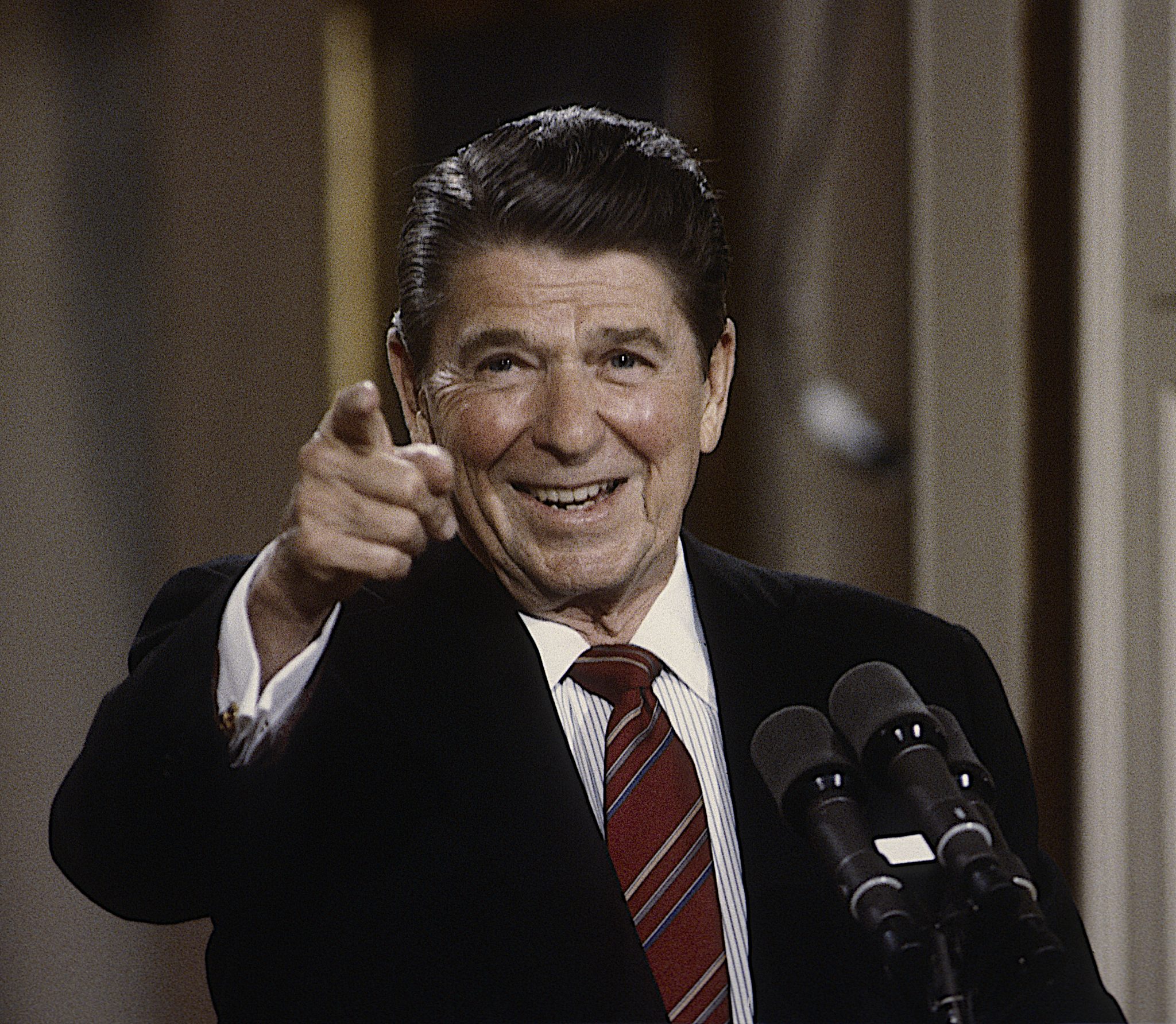 It’s an intriguing question, one requiring a degree of nuance: What would President Ronald Reagan think of President Donald Trump? I’ll begin with a quick statement on what Reagan would disapprove of and then focus mainly on what I believe would impress Reagan about the Trump presidency.

First, what may be for some the elephant in the living room: temperament, personality, character, behavior, style. In those respects, Ronald Reagan and Donald Trump are polar opposites. Trump, in that regard, stands as the anti-Reagan. Ronald Reagan rarely even swore. In his letters and diary, Reagan took care to abbreviate words like “damn” and “hell” as “d–n” and “h-ll.” Such were the worst extremes of any foul language by Reagan. Reagan was also almost universally liked. He had few enemies at a personal level. It’s no exaggeration to say that he was widely beloved — as attested by him winning 44 of 50 states against an incumbent in 1980 and being reelected by 49 of 50 states in 1984. Reagan had great success with an overwhelmingly Democratic Congress because of his charisma and popularity.

Ronald Reagan would not approve of Donald Trump’s behavior. Trump enthusiasts will not want to hear that, and they may judge it a minor, wimpy, unmanly point unworthy of comparison. But that’s a mistake, and it’s unwise. In truth, if Donald Trump were better liked, and not loathed by much of the electorate, his policy successes would have him handily cruising to easy reelection. I’ve pleaded with Donald Trump’s most diehard supporters from the beginning: you should want better behavior of the man if you want him to succeed. His job depends on votes. Policy cannot advance if the chief policymaker loses the office.

And that’s what Ronald Reagan would approve of: Donald Trump’s policy successes, particularly the economy, taxes, deregulation, judicial appointments, and even moral and social issues like abortion and religious liberty. As to the latter, Reagan would be stunned, as many of us are, to see Donald Trump, once a New York liberal, an unexpected champion of the unborn and of religious freedom. Reagan would not only applaud Trump’s solid record in these areas but would even envy it.

These conservative policy accomplishments were true for Trump right out of the gate. No less than the Heritage Foundation, the preeminent conservative think tank that has long carried the flag of Reaganism, judged that President Donald Trump enacted more of Heritage’s agenda in his first year than President Ronald Reagan did in his first year — a year that included Reagan’s mighty August 1981 tax cut.

Running through the entirety of the Trump policy record here would require a much longer analysis (I’m focusing almost entirely on domestic policy), but, in short, the Trump economic record, especially job growth (including among African Americans and Latinos) and GDP growth, has been impressive. Trump’s battles on trade and tariffs have been more worrisome, albeit part of a larger China strategy. His tough talk with China is a risk; it remains to be seen if it will pay off. It could pay off big.

The Obama administration exploded the Federal Register, ballooning it to 97,110 pages in 2016 (265 pages per day) and adding another 6,730 pages (337 per day) in the final 20 days of the Obama presidency. In merely his first year in office, President Trump reportedly cut this by half, down to 162 pages per day, the lowest since 1990. “During his first year, President Trump has made significant progress on limiting the administrative state,” concluded Daniel Bonevac, a professor at the University of Texas in Austin. That progress has continued. It has been a terrific feat and a blessed blow to the regulatory state. Ronald Reagan would have loved it.

Taxes have also been cut under President Trump. Federal income taxes have not been lowered nearly as much as under Reagan, because Reagan had far more room to make changes. When Reagan entered the presidency, the top federal income tax rate was 70 percent. When he left, it was 28 percent, and he consolidated an obscene 16 separate tax brackets into merely two. Trump was able to lower rates a small amount, with the top rate reduced from 39.6 percent to 37 percent and the middle rate reduced from 25 percent to 22 percent. The bigger, more impressive achievement by Trump was cutting the corporate income tax from 35 percent to 21 percent.

Probably Trump’s biggest domestic disappointment was one regrettably shared by Reagan. It is a failure both men would concede: Neither president, both hostage to a Congress that wouldn’t cut spending, has decreased budget deficits because neither could rein in Uncle Sam’s spending addiction.

What will perhaps be Trump’s longest-lasting legacy is largely unseen: his saving of the judiciary through a sizable number of excellent judicial appointments throughout the federal system. He has accepted the guidance of Leonard Leo and the Federalist Society, making good on his 2016 promise to fill the bench with Constitutional judges who practice judicial restraint rather than judicial activism. When it comes to judges, most eyes are fixed upon the Supreme Court, but those appointments are precious few. Most changes happen at levels below the high court, and these are critical.

As for the high court, Trump’s picks have been Neil Gorsuch, who appears to be exactly what conservatives hoped for, particularly in defending religious liberty, and Brett Kavanaugh, on whom, let it be said, the jury is still out. There are some disconcerting signs suggesting Kavanaugh could go the route of Ronald Reagan’s worst Supreme Court pick, Anthony Kennedy — the man Kavanaugh replaced. In defense of Reagan, he initially wanted Robert Bork for that vacancy, but Bork was sabotaged by the moonbat Left. Liberals’ coup of Bork turned out nicely for their cultural revolution, as they ended up with Kennedy giving them everything from the preservation of Roe v. Wade (the 1992 Planned Parenthood v. Casey decision) to the judicial invention of same-sex “marriage” (the 2015 Obergefell decision). In Planned Parenthood v. Casey, Anthony Kennedy also wrote the most ridiculous statement in the history of the high court — his ludicrous, infamous “mystery clause.”

Reagan’s picks for the high court were Kennedy, Sandra Day O’Connor (another disappointment), and the wonderful Antonin Scalia. Reagan batted .333. Trump is batting at least .500.

Alas, the huge question in the Trump–Reagan comparison is the likelihood of a second term.

To that end, Trump lacks something particularly notable compared to Reagan. It’s hard for him to identify a single defining accomplishment that resonates with a majority of Americans. To be fair, that’s true for many presidents who have sought a second term. Barack Obama and Bill Clinton had virtually no accomplishments, but they squeaked by. Reagan was unique going into his second term. He was celebrated for the “Reagan reversal,” for resurrecting “Morning in America,” and for his complete turnaround of the malaise and misery index of the Carter–Ford years, the Watergate and Vietnam syndromes, and much more. He was so enormously popular in 1984 that he crushed the Electoral College 525 to 13. The Reagan tax cuts alone were so dramatic that he was identified with them.

Donald Trump’s challenge is producing a similar signature accomplishment, something even his most loyal supporters struggle to find. They, for instance, expected him to build a massive border wall, which hasn’t happened. The economy is good, and the amount of deregulation has been remarkable, but the regulatory state isn’t exactly a sexy campaign issue. Trump needs something big that Americans across the spectrum can applaud as unique, bold, and memorable. (How about abolishing the IRS?)

What would Ronald Reagan think of Donald Trump? He would be impressed by many of the conservative policy accomplishments in Trump’s first three years. He would be even more impressed if Trump, like him, manages to get reelected in a landslide.