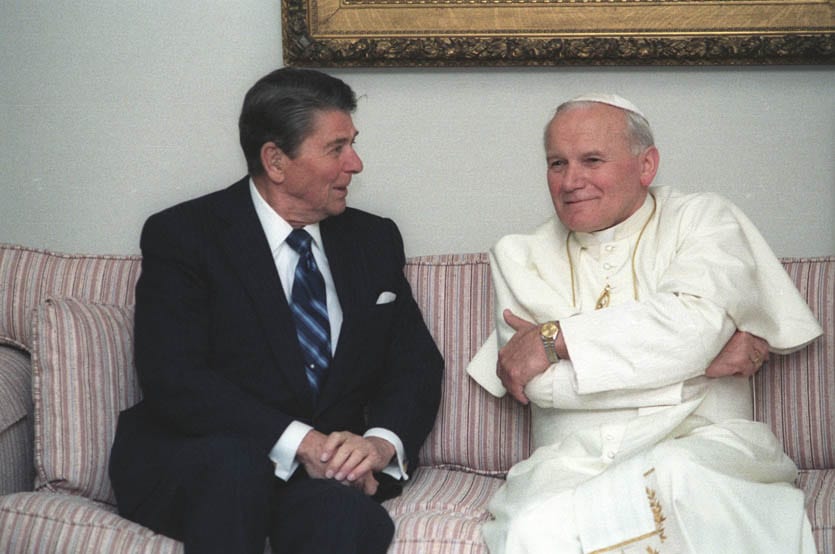 It was 30 years ago this fall that something extraordinary happened, something foreseen by very few in 1989 or, for that matter, in 1979 — with the exception of two men: Ronald Reagan and Pope John Paul II. That special event was the fall of the Berlin Wall, which symbolized the wider collapse of Soviet communism. It took place this time three decades ago, with the wall falling in November 1989.

The communist collapse in Eastern Europe and the unique roles played by Reagan and John Paul II is the focus of a fascinating new documentary by filmmaker Robert Orlando, called The Divine Plan. The film debuts next week, with a premiere one-night showing in movie theaters across the country on Wednesday, November 6.

It’s truly a feel-good film, the sort of happy historical ending we don’t get often. And this happy ending occurred in our lifetimes. We don’t savor the victory enough.

Not that it was easy. Not that suffering wasn’t involved, including for the protagonists.

In the course of this grand historical pursuit, both Ronald Reagan and John Paul II nearly died from assassination attempts in March and May 1981, respectively. Both could have easily bled to death. But they survived, later to come together at the Vatican in June 1982 and confide their shared belief that God had spared their lives for a special purpose — to defeat atheistic Soviet communism and break its grip on hundreds of millions behind the Iron Curtain. They felt a higher calling, according to what Reagan privately called “The DP” — The Divine Plan. Yes, “The DP.” Reagan spoke about it so often that his close friend and adviser, Bill Clark, who was a spiritual partner to Reagan, often recalled that he and Reagan turned that phrase into an acronym.

Obviously, we expect a pope to think that way, but here was a president who thought that way. Reagan saw such a role for his nation as well as for himself. “I’ve always believed that this blessed land was set apart in a special way, that some divine plan placed this great continent here between the two oceans to be found by … people who had a special love for freedom,” Reagan said on January 31, 1983. He and John Paul II felt that the noblest use of our individual freedom was in service to a larger Divine Plan. “The only true freedom, the only freedom that can truly satisfy, is the freedom to do what we ought as human beings created by God according to his plan,” Pope John Paul II said on September 10, 1987.

The trick, the difficulty for us all, is discerning precisely what God’s plan is. That’s never an easy process for any believer. It’s a perennial problem of mankind through the ages.

And yet, Ronald Reagan and John Paul felt certain about one thing: atheistic Soviet communism was evil and so the peoples behind the Iron Curtain needed to be liberated. Both felt a heightened call to strive toward that purpose after the assassination attempts.

“There’s a reason for this,” Reagan said to New York’s Cardinal Terence Cooke on Good Friday 1981. The two met at the White House, with Reagan still recovering from John Hinckley’s bullet on March 30. Cooke told Reagan, “The hand of God was upon you.” A pensive Reagan agreed, “I know.” He told Cooke, “I have decided that whatever time I have left is for Him.”

A year later, at the Vatican, he and John Paul II would share the same sentiment. The president invoked the hand of Providence to the pope, asserting, “Look how the evil forces were put in our way and how Providence intervened.” And it was the American president who invoked Poland to the Polish pontiff. “Hope remains in Poland,” he told John Paul II. “We, working together, can keep it alive.”

A wedge needed to be hammered into Poland, specifically through the Solidarity movement. Solidarity could be the wedge to splinter the entire Communist Bloc — ultimately shaking the very foundation of the Berlin Wall.

How these two men went about doing that is a remarkable tale. Their larger sense of history and of the guiding hand of Providence went back not merely to the 1980s but to their youth.

Robert Orlando’s film traces those steps. It’s a riveting work, beautifully done, with a sheer artistry rare for historical works. Film is, of course, referred to as one of “the arts.” That would seem an overly generous description of most movies. This film, however, is indeed a historical work of art.

The information provided is fascinating. Among the most historically valuable material is the witness of Richard V. Allen. Allen actually sat in Reagan’s living room in California in June 1979 when Reagan first watched news footage of the pope’s first visit to his Polish homeland. Allen said Reagan was “astounded by the crowd size and was deeply moved by the outpouring of emotion.” Allen saw a tear in Reagan’s eye as the future president turned to him and said, “Dick, that’s it. That’s it. The pope is the key!” Reagan knew at that moment that the election of a Polish pope was a game-changer in the Cold War. He knew he had to find a way to get elected and to reach out to this new Polish pontiff and “make him and the Vatican an ally.”

Reagan did just that, and the rest is history.

I’ve been asked to clarify my own role with this film — particularly the companion book, which is titled The Divine Plan: John Paul II, Ronald Reagan, and the Dramatic End of the Cold War. Robert Orlando and I are co-authors of the companion book.

Robert Orlando thus separately pursued his own unique initiative. He conceived an innovative angle, analyzing John Paul II and Ronald Reagan from the vantage of their experiences as actors ascending the stage — ultimately a global stage in a high-stakes drama to defeat an Evil Empire. Both men had been literal actors, and now they assumed their biggest platform yet. All the world’s a stage, and here were two major players in a compelling theo-drama closing the 20th century.

As to the companion book that goes with the film, when Robert Orlando was finished with interviews, he possessed a one-of-a-kind treasure trove of new material not to be wasted — hundreds of pages of transcripts, only a tiny sliver of which would make the 80-minute film. An unfortunate amount of superb material ended up on the cutting-room floor.

With the film nearing completion, Robert Orlando asked me to consider doing a companion book that harnessed this wonderful primary source material. The excellent ISI Books, which published A Pope and a President, agreed.

Whereas A Pope and a President was a chronological narrative of the story of Reagan and John Paul II and their actions, interaction, and partnership, the book version of The Divine Plan is an extension of themes explored in the documentary. The book takes a deep dive into the philosophical, the theoretical, the theological, the theatrical — from Aquinas to Shakespeare, from faith to free will, from religious repression to religious expression. It explores how the two main characters — or actors — performed within their understanding and the unfolding of a Divine Plan. The Divine Plan: John Paul II, Ronald Reagan, and the Dramatic End of the Cold War is in a sense theo-drama as well as theo-history.

That’s the book, which was published in June. The big story now is the film, which hits next week, November 6.

All of this is to say you don’t want to miss this film, which is carried by major distributors such as AMC, Regal, and Cinemark. Check out the website for locations and tickets: www.thedivineplanmovie.com.

To repeat, this is a special single-night showing nationwide, with the potential for continued screenings if attendance is strong. We constantly complain that Hollywood doesn’t support faith-based films. Sure, many of those films are not well done. And yet, here’s a beautiful piece of work, sophisticated artistically and historically. But much of that effort (and potentially that of others) could go unrewarded if those who want such films don’t show up at theaters.

Spread the word on this inspiring story of two men and the Divine Plan behind the fall of the Berlin Wall. Mark your calendars for November 6.

Paul Kengor
Follow Their Stories:
View More
Paul Kengor is Editor of The American Spectator. Dr. Kengor is also a professor of political science at Grove City College, a senior academic fellow at the Center for Vision & Values, and the author of over a dozen books, including A Pope and a President: John Paul II, Ronald Reagan, and the Extraordinary Untold Story of the 20th Century, The Politically Incorrect Guide to Communism, and Dupes: How America’s Adversaries Have Manipulated Progressives for a Century.
Most Popular
1
Special Report
What in the Hell Is the Penn Biden Center?
by Paul Kengor