by Ellie Gardey
Homeless people stand on the streets of San Francisco, Calif. (The American Spectator) 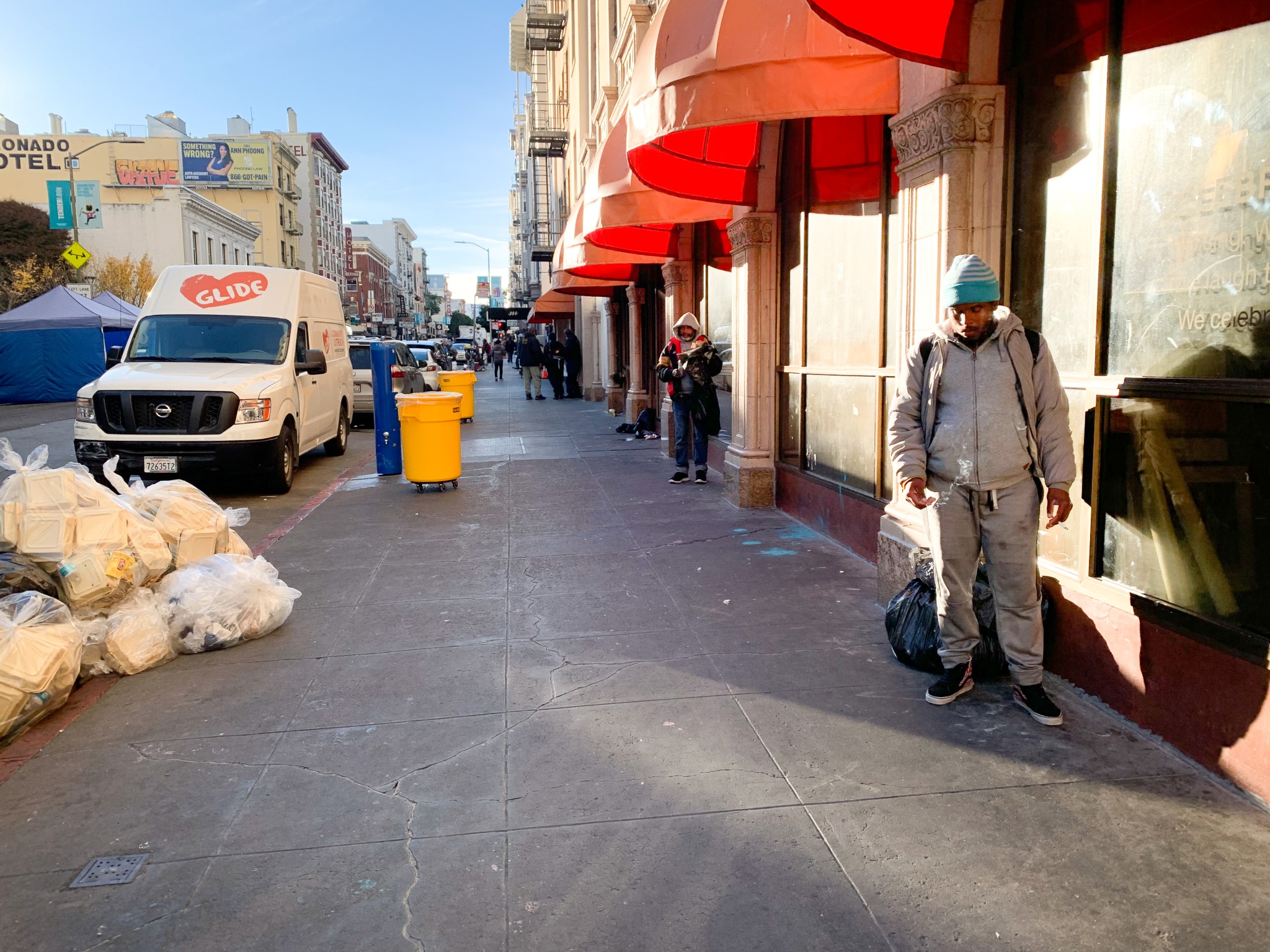 California Gov. Gavin Newsom has a world of political ambitions. But problem No. 1 with that ambition is California’s homelessness crisis.

An opponent need only show images of Sacramento’s, San Francisco’s, and Los Angeles’ streets, which are overrun with homeless citizens, and the conclusion is obvious: Newsom has left Californians worse off. 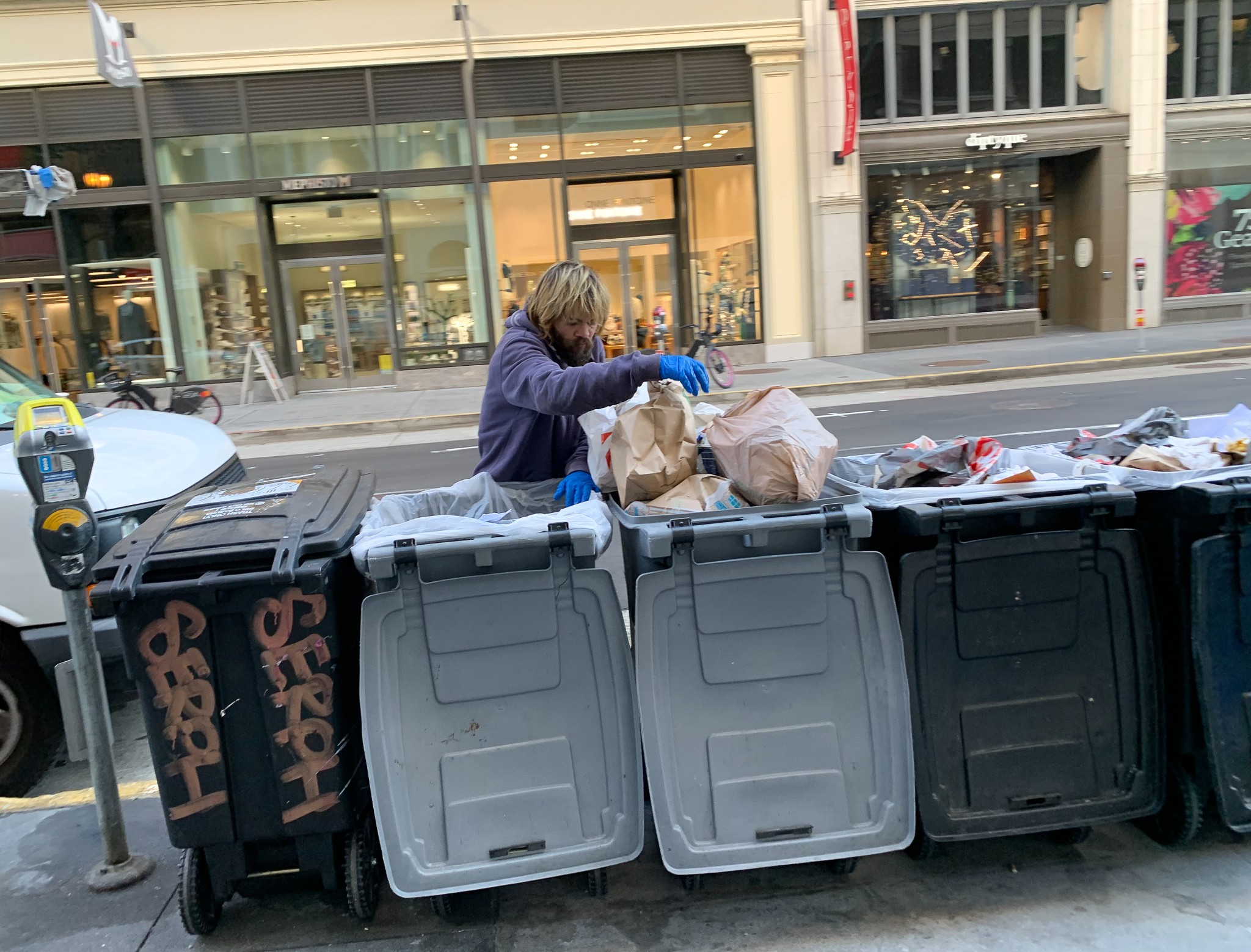 A homeless man searches through garbage in San Francisco, Calif. (The American Spectator)

“We have people dying on the streets every day because of it,” John Dennis, the chair of San Francisco’s GOP, told The American Spectator of the crisis.

Apart from the squalor that American citizens are living in, there are also the effects of the homeless on the rest of the population. People heading to work and parents taking their kids to school have to walk past roaming homeless populations who more often than not have drug addictions and mental illnesses — and who often commit crimes. Moreover, the homeless encampments and resulting garbage leave the city streets dystopian and disgusting. If you have to hold your nose and shield your eyes from the filth of your own community, then your politicians have failed you.

Homeless people stand on the streets of San Francisco, Calif. (The American Spectator)

In San Francisco, Newsom holds greater responsibility for the crisis because he was mayor of the city for eight years. When he was on the city’s Board of Supervisors prior to that, he took up the mandate of tackling the homelessness crisis and continued to make it a priority throughout his mayorship and governorship.

Newsom, who was seen as a pragmatic centrist during his time on the Board of Supervisors and in the mayor’s office, moved from providing direct cash payments to the homeless to using that money for specific services. The program was known as “Care Not Cash.”

The change in incentives didn’t work. The number of homeless people in San Francisco has increased since the launch of the program in 2004. 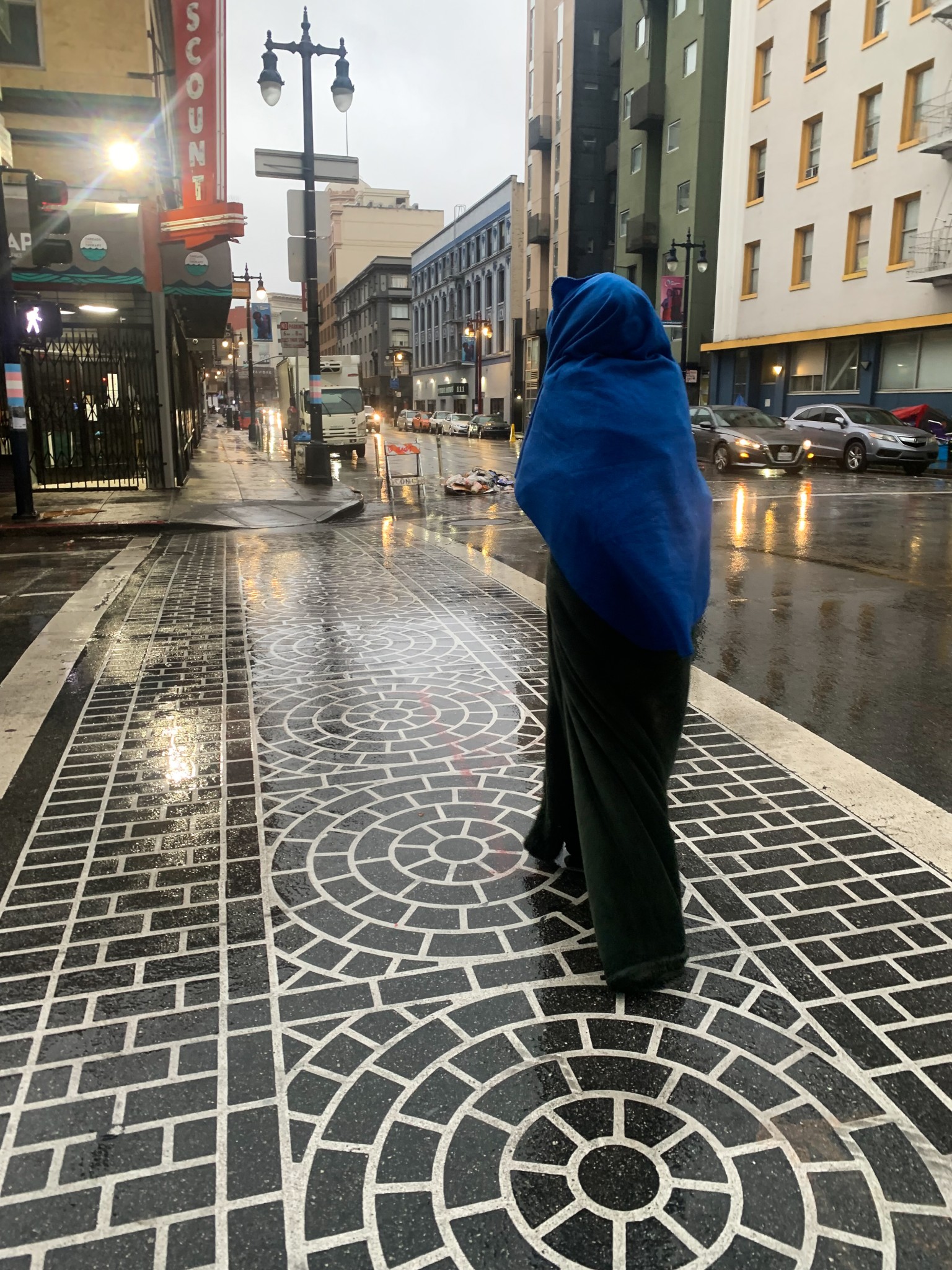 A homeless man walks through the streets of San Francisco, Calif. (The American Spectator)

“The worst problem, if you ask anyone here, is homelessness,” Wagner Cantao, who works in San Francisco, told The American Spectator. Polling bears that out. In virtually every recent poll, Californians say that the homelessness crisis is their top concern.

Under Newsom’s governorship, the problem has worsened. The homeless population has grown 15 percent statewide since 2019. That increase corresponds with the largest increase in funding for homeless programs in California’s history. According to CalMatters, the homeless population increased by at least 22,500 to 173,800 people statewide between 2019 and 2022 (Newsom has been governor since 2019). In Sacramento, homelessness spiked 71 percent in 2022 alone.

So what is Newsom doing wrong?

“Insanity is doing the same thing over and over and expecting different results,” said Cantao. “It’s been going on for 20–30 years, and they just keep throwing money at the issue.” 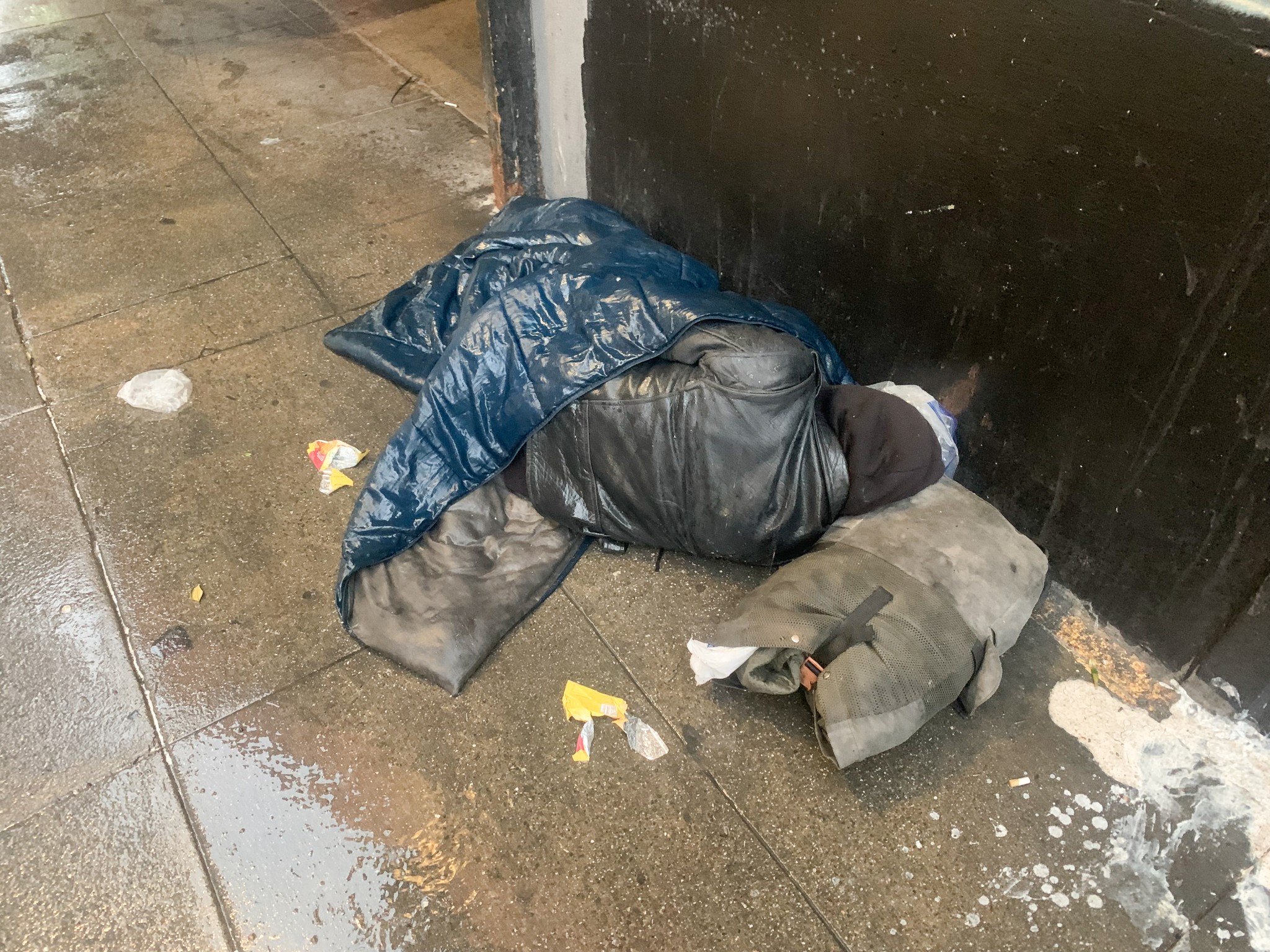 A homeless man sleeps on the streets of San Francisco, Calif. (The American Spectator)

Dennis asserted that San Francisco has policies that have made the city a “regional hub for people who want to live a drug-addicted lifestyle.”

“We give them needles. We give them EBT cards for food. We give them cash checks. There are tons of food and services all over the place. We now let them go to the bathroom in the streets, and we have people with yellow vests and barrels come in, come through and clean it or pressure-wash the sidewalks, we’re building million-dollar toilets for them.”

“If you wanted it to be homeless,” continued Dennis, “and you’re in Redding, you’re like, oh, shoot, it’s not that far, that’s a four-hour bus ride. Let me go down to San Francisco and they’ll give me money to live like this.”

“They’ll give you a tent,” said Dennis. “I mean, everything you want.” 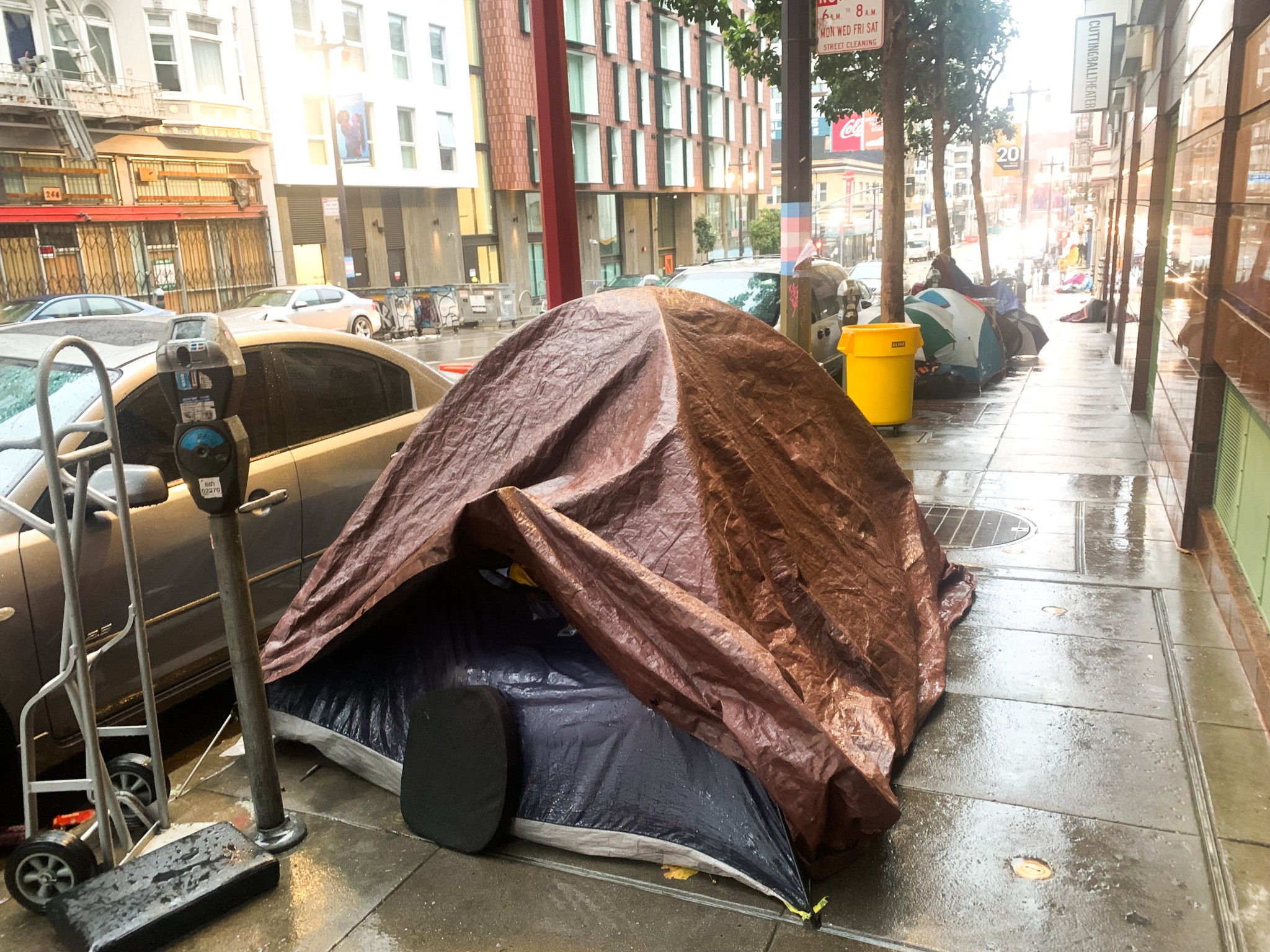 A tent sits on the sidewalk in San Francisco, Calif. (The American Spectator)

Newsom is perhaps starting to wise up to the fact that people with severe mental illnesses and drug addictions shouldn’t be at liberty to roam the streets and should be living some place where they can be properly cared for.

A new civil court system he is spearheading, the Community Assistance, Recovery and Empowerment Court, or CARE Court, will allow people to petition a judge to place a person with severe mental illness into a psychiatric treatment program. He has done so despite the opposition of organizations like the American Civil Liberties Union, which opposes the system because it says it will trample on people’s liberties.

That program’s mandate of providing involuntary help to those who need it follows along similar lines as the ideas proposed by Mike Gatto, a Democrat who previously served in the state Assembly.

Gatto introduced a ballot initiative that proposed “a new type of detention within the justice system — one dedicated to drug treatment and mental health.” The program would treat minor crimes committed by the homeless as an opportunity to “sentence” defendants to a treatment program, such as requiring drug rehabilitation, connecting them to a shelter, or placing them in a mental-health hospital. Gatto also called for lengthening jail terms for misdemeanors. 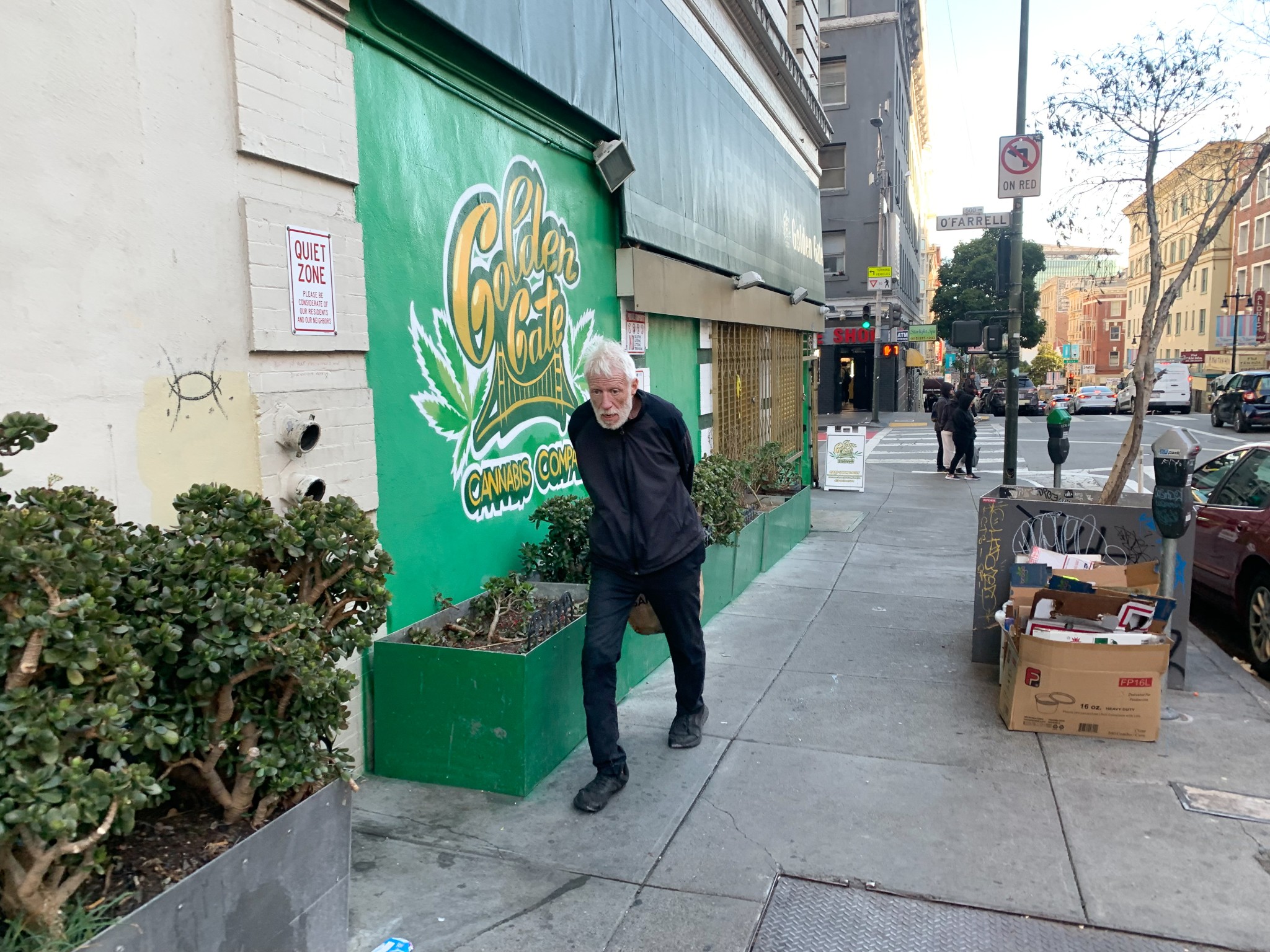 A homeless man walks in from of a cannabis store in San Francisco, Calif. (The American Spectator)

Gatto explained, “Several studies have chronicled how the justice system — which used to scare some drug abusers straight, force others into rehab and assist those with mental-health issues — now (ironically, in the name of mercy) is prevented from helping.”

But Newsom has focused more of his attention on solving the housing crisis as a means of solving the homelessness crisis. His administration has pushed the idea that the two crises are inextricably linked. 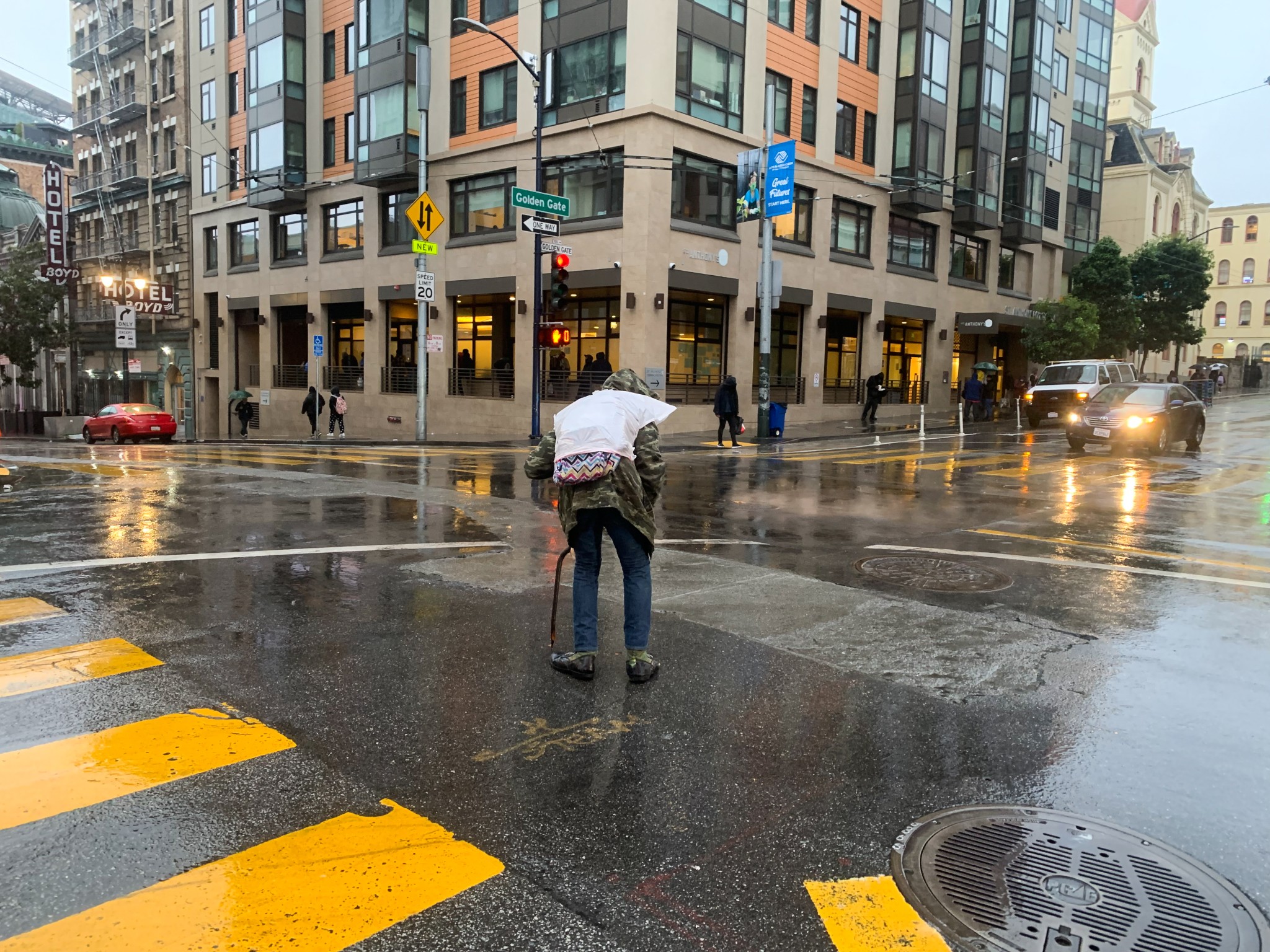 A homeless man stands in the middle of the street in San Francisco, Calif. (The American Spectator)

Gatto, however, has pushed back on the idea that expensive housing is the reason people are living on the streets.

“The coterie of able-bodied young men living under my freeway exit could certainly pool resources (including government-provided funds) and share a modest apartment in a down-market locale — which would be better than sleeping outside,” he said. “Understanding why they don’t is key to understanding the issue.” 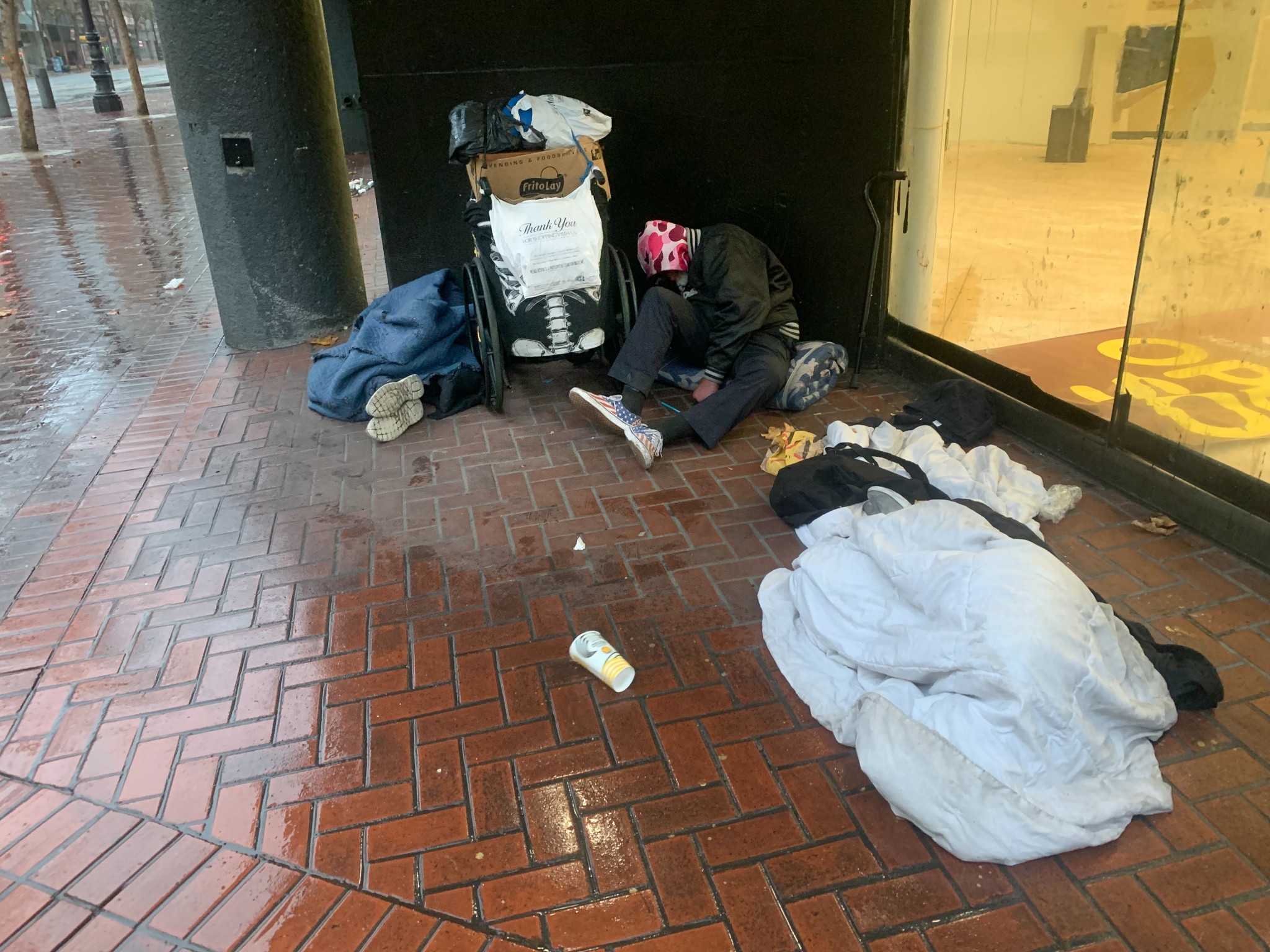 Homeless men sleep on the streets in San Francisco, Calif. (The American Spectator)

Addiction and mental-health issues are the real reasons for many people’s homelessness, explained Gatto.

It may be too late for Newsom to convince local officials to move from enabling homelessness to giving people the help they truly need.

If he runs for president, political opponents will ask voters, “Is this what you want America to look like?” Newsom will be unable to deny that the crisis only worsened under his leadership.