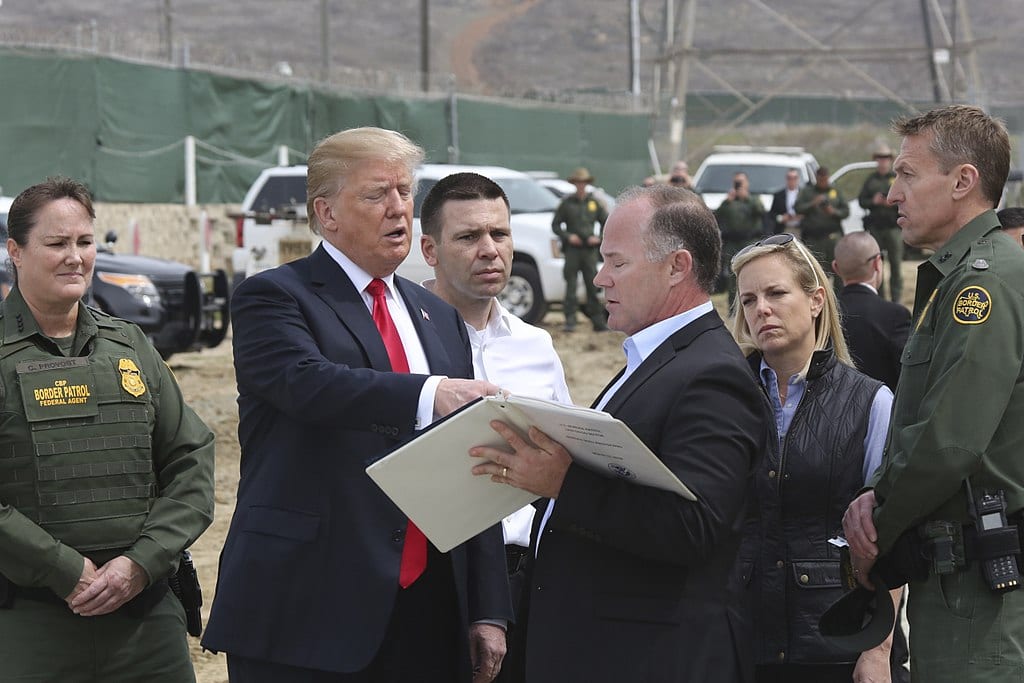 Score another one for President Trump.

On Friday the President walked into the Rose Garden to discuss his signing of an order declaring a “national emergency” in the case for building a wall along the southern border. Among other things, he said this:

We had a little disappointment for the first year and a half, people that should have stepped up did not step up. They didn’t step up, and they should have. It would have been easy, not that easy, but it would have been a lot easier. But some people didn’t step up. But we’re stepping up now. So we have a chance of getting close to $8 billion, whether it is $8 billion or $2 billion or $1.5 billion it’s going to build a lot of wall.

As if that weren’t enough to make the point of his determination there was this in an exchange with CNN’s Jim Acosta:

President Trump: “I’ll ask the angel moms. What do you think, do you think I’m creating something? Ask these incredible women who lost their daughters and their sons.”

With that the President gestured to a group of “Angel Moms” — mothers whose children were murdered by an illegal. All displayed photos of their lost child. At the conclusion of the presser, the Angel Moms confronted CNN’s Acosta, holding up their signs. Said one Mom who had lost her son, looking Acosta in the eye: “President Trump is completely correct on this issue, we need to protect this country.”

Well aside from ignoring the deadly serious message of those Angel Moms and insisting that the flood of illegals along with the massive drug smuggling are a not serious problem? None of the news reports out there adequately convey the President’s determination to build the wall — to finish a project that already exists.

In a pre-State of the Union briefing at the White House, at which I was present, the striking thing was the President’s attitude — totally upbeat and completely determined. This is, without doubt, exactly what drives his critics into foaming seizures set off by Trump Derangement Syndrome.

It is not hard to understand this President. He has a very long, well documented career of sticking to his guns to accomplish whatever the goal he has in mind. If his critics would stop talking to each other and actually sit down and re-visit the things Donald Trump has written long before he became president, they would help themselves in not looking so foolish when he yet again confounds the conventional wisdom. Here, for example, is an excerpt from a 2008 Trump book — eleven years ago — in which he discusses why he ignored the advice he had received early in his life not to enter the world of Manhattan real estate.

If I’d only considered the facts, which weren’t too rosy, there is no way I would have ventured into real estate. But I did. Why? Because when I hear the word ‘No’ it becomes a challenge to me. I believe the so-called impossible is actually very often possible, if you’re willing to work very hard, and if you realize that problems can become opportunities…. That kind of attitude can give you the power to conquer obstacles and succeed in the face of long odds.

Oh yes. The name of the book where that bit of insight into Trump’s thinking appears? That would be Trump: Never Give Up: How I Turned My Biggest Challenges Into Success.

The central key to understanding the President’s actions is to understand that when it comes to accomplishing goals he is relentless. He focuses on the task at hand — and he stays focused until he gets the job done.

It is remarkable how many people out there in the media and elsewhere continually misjudge Trump, repeatedly insisting that he can’t accomplish X — only to fall silent when X is accomplished, quickly moving on to insist that something else will never be accomplished — until it is. The money Trump obtained in the recently passed Congressional Resolution is, exactly as Trump says, money obtained that House Speaker Nancy Pelosi swore he would never get. She sarcastically said he would get a dollar — and he walked away with $1.4 billion. He wasn’t happy even at that — so along comes the declaration of a national emergency, and the potential of $8 billion total. Instantaneously the lawyers’ division of the Swamp, just as Trump predicted, started the suing process to hold him up. He used his time in the Rose Garden to mock them, saying:

Put another way? Here again is Trump in Never Give Up, the title of the chapter “I Love a Good Fight”:

Adversity is a fact of life. Chances are that you will never wake up to an adversity-free day. Accept this as a challenge — rather than a disappointment. Be bigger than the problems, be ready to fight for your rights, and all will be well.

His critics keep getting egg on their face when it comes to Trump because they continually ignore his long-ago stated and much on the record willingness to fight. In this case, fight for getting more money to finish building the wall.

He fought — and he won. And he isn’t finished fighting.

In addition, the fight for the wall is making his opponents look almost politically suicidal on the issue of border security. Texas Republican Congressman Dan Crenshaw tweeted this to the Left’s Texas heartthrob Beto O’Rourke:

If you could snap your fingers and make El Paso’s border wall disappear, would you?

And like clockwork, O’Rourke responded on MSNBC, saying: “Absolutely, I’d take the wall down.”

Well, aside that O’Rourke served his entire time in Congress surrounded by walls, fencing, and steel barriers (as seen here) and made no move to get them taken down. Aside from the breathtaking hypocrisy along the lines of “walls for me but not for thee” — O’Rourke instantly put all of the other potential Democratic presidential hopefuls in the position of having to explain why the walls that are already up and working as they are supposed to should now be removed. A position that one can rest assured will be used as a club by Trump in the 2020 re-election battle.

Forget all the naysayers. President Trump is winning the Battle of the Wall. And based on the experience of both his life and now his presidency, it is a very safe bet he will not stop until he has accomplished his goal.