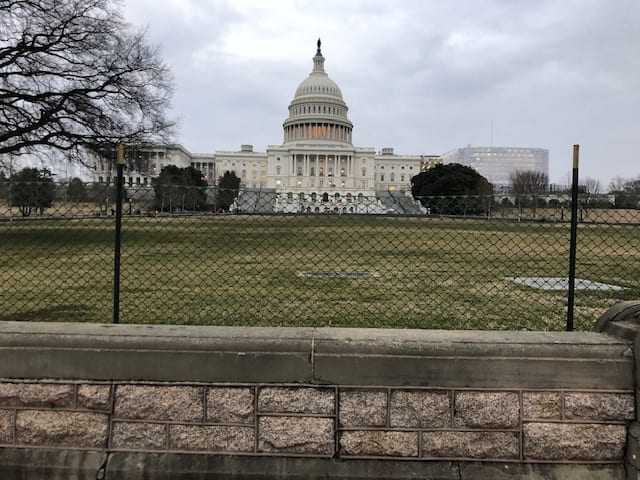 Walls, House Speaker Nancy Pelosi insists, are “immoral.” The Democratic Leader of the Senate, New York Senator Chuck Schumer, opposes a wall. Democratic Congressman Hakeem Jeffries insists that a border wall would be “ineffective” and is a “fifth-century solution to a 21st-century problem.” And on and on go Democrats about their refusal to fund a wall along the southern border.

When it comes to having walls and steel barriers to protect — themselves? Well, see for yourself.

This week I took a trip to Capitol Hill, cell phone camera in hand, to see for myself just exactly what is the reality of “border security” when it comes to protecting Speaker Pelosi, Senator Schumer, and Congressman Jeffries, not to mention all of their colleagues and staff in the U.S. House of Representatives and the U.S. Senate.

As someone who spent time in my early professional life working both in the House and Senate, let me layout the physical landmarks of Capitol Hill for those unfamiliar with the turf.

First and most prominently, of course, is the U.S. Capitol building itself. Then, across Independence Avenue there are three House office buildings, each named for a former Speaker of the House — Cannon the oldest, next is Longworth, and last is Rayburn. On the Senate side, running along Constitution Avenue, are the three Senate office buildings, all named for prominent senators. The oldest is the Russell Building, next is Dirksen, and last is the newest, the Hart Building. In all cases, there are side streets that separate the buildings from one another, streets that extend well beyond the buildings they separate for a block each.

So let’s imagine that, faithful American that you are, you have decided to visit your nation’s capital. You have driven your car all the way to Washington, D.C. from your home state. You get directions to Capitol Hill and you arrive, eager to take in the sights. What do you find? Once upon a time — as in when I worked on Capitol Hill in the late 1970s and early 1980s — you could drive onto a free parking lot directly on the side of the East Front of the U.S. Capitol Building. You could cruise the side streets between the House and Senate office buildings and if you found a space, pull in and park. Alas…no more. What do you find now as you try fruitlessly to take a driving tour of Capitol Hill?

That’s right. Walls may be immoral for the border, but when it comes to protecting Pelosi, Schumer, and their colleagues and staff? Suddenly walls are not so immoral anymore.

So let’s take a photo tour of the buildings where Nancy and Chuck and their colleagues work on Capitol Hill.

Let’s start with Nancy. Speaker Pelosi’s official web site says that her congressional office is in the Longworth House Office Building. And, of course, as Speaker of the House she has a grand office in the Capitol itself

Take a look at this picture of the U.S. Capitol building as posted on Pelosi’s website. Lovely picture. So you want to drive onto the Capitol grounds to park and go visit Nancy? Sorry. No can do. 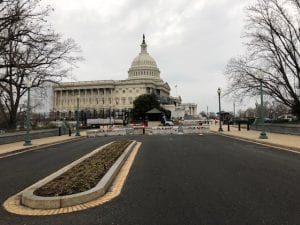 This photo here shows what Pelosi’s website will not show you. It is a photo of the unmentioned reality that surrounds Pelosi when that will greet you if you try. That would be a series of three steel barriers, painted white with the word STOP emblazoned across the top in bold, impossible to miss red capital letters. In between is a large — as opposed to mammoth — concrete planter. There are plenty of mammoth planters blocking various entrances as well, as here, looking away from the Senate’s Russell Building and the Capitol towards Union Station. 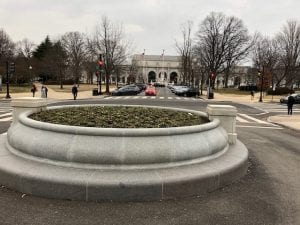 The barriers slide down into the road when an “authorized” vehicle (read: a car carrying the Speaker or a House member or a staffer) is allowed to enter the Capitol grounds. And once you are past those steel barriers — yup, you will see another steel barrier, just to make sure you can’t get in if the first wall of barriers somehow fails.

In fact, huge swaths of the Capitol grounds are surrounded by both very old, decorative walls that are backed up by tasteful green wire mesh fencing — as here. 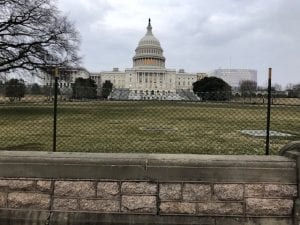 Note: Out of camera range behind me is the ring of bollards.

OK, forget driving onto the Capitol grounds. On the other side of Independence Avenue are the three House office buildings. Nancy’s office is in the Longworth Building, the middle of the three. Separating Longworth from the older Cannon Building is New Jersey Avenue. So you decide to drive down New Jersey Avenue. Oh. Wait. 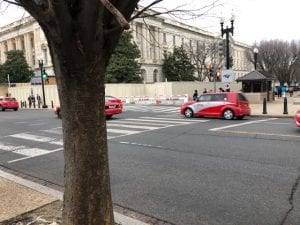 This photo here shows the entrance to New Jersey Avenue as it separates Cannon and Longworth. That’s the Cannon Building in the photo — yes, surrounded by a large wall we are assured is merely there during a restoration project. But look next to Cannon, at the entrance to New Jersey, which, again, runs between the middle of the Cannon and Longworth Buildings. Ah, yes. There, again, are more of those pesky steel barriers, their white paint with the red STOP at the top all too visible. Sorry. No driving down New Jersey Avenue to see Nancy.

And you wish to drive around to see Congressman Jeffries at his office in the Rayburn Building? Jeffries being the congressman who says walls are a “fifth-century solution to a 21st-century problem.” Yes, indeed, there are those same white steel raised barriers right there at the entrance of South Capitol Street, which separates the Longworth and Rayburn buildings. Not to mention they also block the entrance to C Street for that section that runs behind all three House office buildings. Congressman Jeffries clearly has a serious affection for fifth century solutions.

So you decide to abandon seeing Nancy Pelosi and Hakeem Jeffries, but there’s always driving over to see Chuck Schumer on the Senate side of the Hill. Of course, since Chuck’s office as Senate Minority Leader is also in the Capitol Building, you can’t drive in there, as you have now learned. But according to Chuck Schumer’s website his senatorial office is in the Hart Senate Office Building, the third building of the three Senate Office Buildings. As a matter of fact, Chuck’s website has been good enough to provide you with a picture of the Hart Building — as seen right here. Lovely, yes? Well, sure, there may be some concrete planters visible with lovely flowers, but totally accessible. Oh…wait. That’s an old photo.

Now the building is protected by the “great wall” of green steel bollards, like these, which ring the entire Capitol “campus” including the Hart Building. In fact, the bollards, added after 9/11, ring 5.5 miles around the entire Capitol complex, Senate and House buildings included. They cost $7,500 each. And on the side and back of the Hart Building? Here’s a look in this photo: 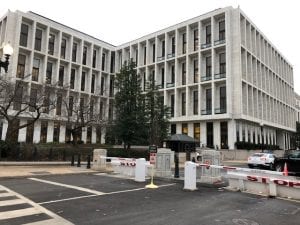 It shows, yes, indeed, something that Chuck Schumer’s website will not show you. That would be those same now-quite-familiar white steel barriers with the word STOP in its usual bold red. Along with more of the green bollards. And oh yes… a wall. You know, one of those immoral walls, this one in stylish granite. 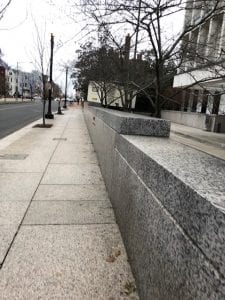 In short? In short Nancy Pelosi and Chuck Schumer and all of their colleagues and staff go to work every day in a walled, fenced, and bollard-ringed fortress. No one — not Nancy, not Chuck, not Hakeem Jeffries or anybody else in Congress — has called these physical barriers immoral, much less have they demanded that they be torn down.

And I’m glad. While one can still walk around the area, no one can any longer drive around the key parts of it, and with good reason. We live in an age of the car bomb, and our elected representatives and their staffs deserve to be protected. If you choose to enter any of these buildings on foot, you will be greeted by a metal detector and the Capitol Police — the latter outside the buildings as well. Armed to the teeth with guns.

The point is obvious. Pelosi, Schumer and company on Capitol Hill are dead set against walls and security to protect the Border — but they are demanding it for themselves. And they get it — with no expense spared, as with that 5.5-mile ring of steel bollards at $7,500 a pop.