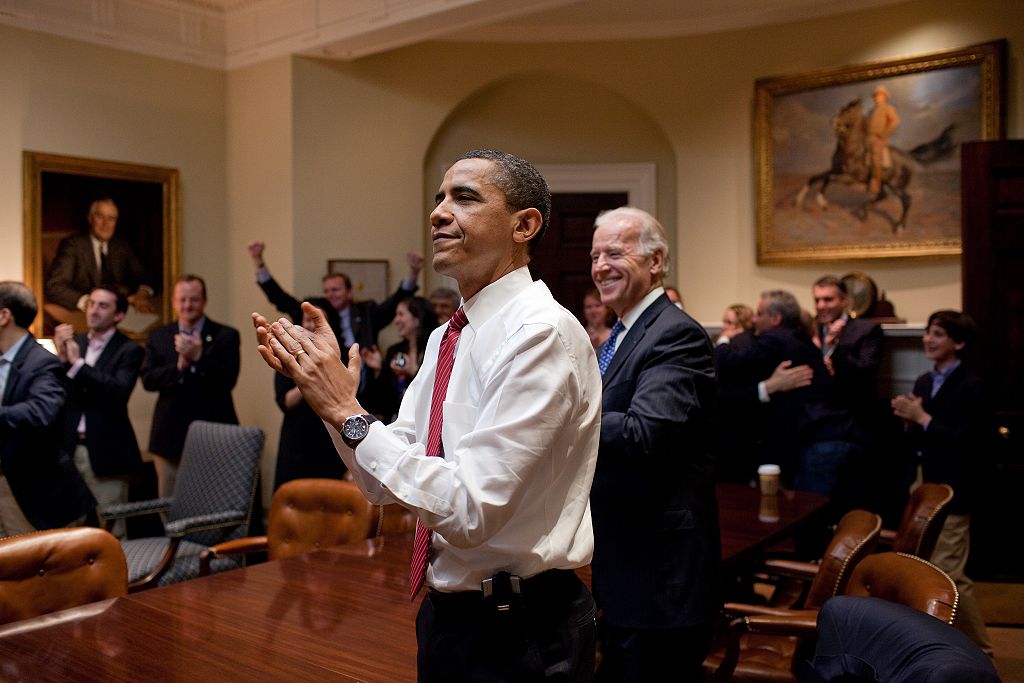 Biden has spoken of the limits of religious freedom — meaning that he will not support it whenever it conflicts with the goals of liberalism.

Barack Obama famously said that bitter Americans cling to their “God and guns,” and implied that his “fundamental transformation” of the country would free them from those constraints. It was Obama’s way of restating Marx’s dismissal of religion as the “opiate of the masses.” But Obama, for all his persecution of the religious, didn’t complete the task. It falls now to Joe Biden to pick up where Obama left off. Toward that end, Biden has promised Planned Parenthood and NARAL that he will resume Obama’s persecution of the Little Sisters of the Poor and other Christians.

Biden has spoken of the limits of religious freedom — meaning that he will not support it whenever it conflicts with the goals of liberalism. That is what Trump means when he says that Biden is “against God” and will “hurt the Bible.” Biden wants to eliminate Biblical morality from public life and impose liberalism’s moral relativism on the faithful. He will not only impose a contraceptive mandate on them but an abortion mandate as well. He is now on record in opposition to the Hyde Amendment and says that he will spend the tax dollars of Americans on abortion.

The Democrats are the party of secularism save during campaign seasons, when they suddenly insist that they possess devout faith in an effort to con the religious. So, naturally, Biden took umbrage at Trump’s comments. “President Trump’s decision today to profane God and to smear my faith in a political attack is a stark reminder of what the stakes of this fight truly are,” said Biden.

The media, of course, rushed to Biden’s side in the spat. The media normally portrays politicians of faith as oddballs, but suspends that attitude for Biden. Here was the Washington Post’s comically biased headline about the squabble: “Trump said Biden ‘hurt God.’ Biden has spent his life drawing from his Catholic faith.”

The truth is Biden has spent his life rejecting his Catholic faith in favor of liberal politics. On every decisive moral issue, he stands against traditional Catholic teaching, from his support for embryonic stem cell research to support for abortion at every stage to his support for gay marriage. When exactly does he “draw” upon his faith? This is a pol who went to China and said that he “fully understood” its one-child policy. This is a pol who officiates at gay weddings and says that transsexualism is the “civil rights issue of our time.”

Biden has spent his life saying that his faith has no place in politics, that he will not “impose” it on Americans. But he is happy to impose the immorality of the Democrats on Americans and drive Christians from the public square. Should he win, he will court-martial Christian chaplains who don’t submit to the LGBTQ ethos and will persecute those who don’t submit to his regime of abortion rights. Obama’s war on the religious will accelerate under Biden, all in the name of liberalism’s godless goals. Biden will predicate every American’s interaction with the federal government on an acceptance of liberalism’s “morality,” which grows more freakish by the year.

The Washington Post gives as proof of Biden’s “faith” the testimonials of religious who have themselves lost their faith. It trots out “Sister Obamacare,” Carol Keehan, and Sister Simone Campbell, who has received money from George Soros, to vouch for Biden:

Sister Carol Keehan, a key supporter of the health-care law who was the president of the Catholic Health Association at the time, said Biden tried to be a liaison between Catholic leaders and the White House to get the law passed. He called several bishops to discuss how the law would affect funding for abortion.

Sister Simone Campbell, another leading activist-nun who advocated for the law, said Biden — more than others in the White House — understood the bishops’ concerns about the law and worked hard to solve them. “I wouldn’t go as far as ‘sympathetic,’ ” to the bishops’ perspective, she said, describing Biden’s attitude. “I think it was more pragmatic.”

But, she added, the vice president’s knowledge of the Catholic point of view was useful.

On the day the law was signed, Campbell said, she introduced herself to Biden at a victory party. “He proceeded to have this very heartfelt celebration about how much the Affordable Care Act passage was for him about faith,” she said.

What a joke. If ramming through Obamacare, which represents one of the gravest assaults on religious liberty in the country’s history, is the proof of Biden’s faith, he has none. Trump is right: Biden represents a dire threat to the Judeo-Christian foundations of the country.