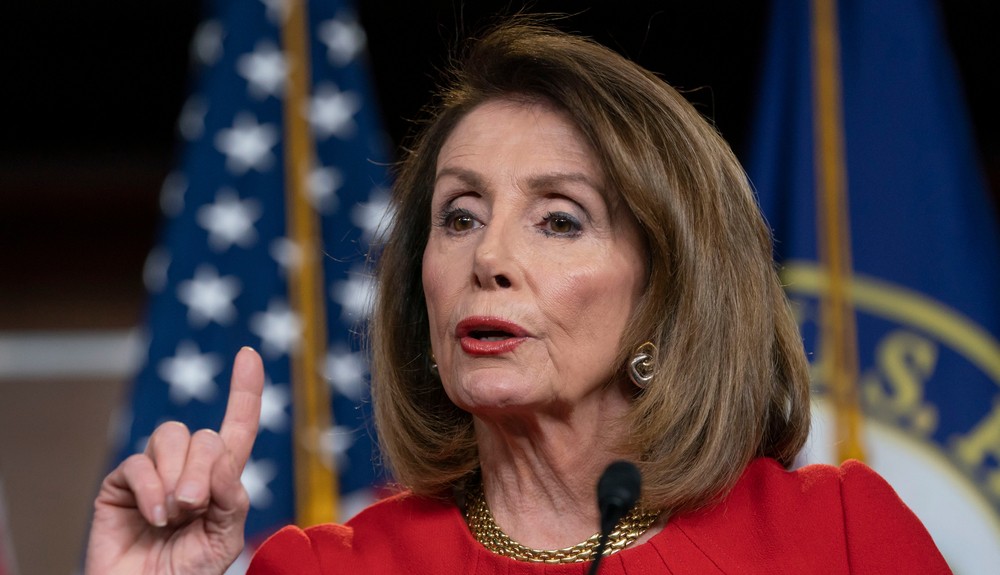 Nancy Pelosi delivered her annual impeachment to the Senate, and the result was exactly as I had predicted in The American Spectator two full weeks ago on January 13: dead on arrival.

There are not two-thirds of the Senate to convict. There never were going to be two-thirds of the Senate to convict. Rather, it all is a sham and a fraud on the American public, who, frankly, are getting exactly what the fools who voted for this House of Representatives and Senate deserve. With people dying of COVID, vaccinations running way behind schedule, shortages in vaccine supplies, a befuddled Joe Biden now telling his voters that his plan to combat COVID basically is the same as Donald Trump’s plan, the focus in Washington is on … an impeachment that is dead on arrival.

Congressional representatives and U.S. senators are paid to do the people’s business. They are paid very well. Taxpayers also pay for the Democrat women in Congress to all buy new white dresses for the State of the Union. Taxpayers pay for their meals, their platinum health care, their air travel around the country and around the world. In return, taxpayers would expect that the people’s needs would be front and center. The current crop of American voters have no one to blame but themselves for the Congress they have — a myopic assemblage of mediocrities driven only by pure hate: hate for conservatives, hate for White people, contempt for the intelligence of Black people, hate for the only cable television station that has a modicum of conservative semblance, hate for talk radio. Just hate.

We saw this Congress’s inaction in action when Pelosi took the gavel from Paul Ryan two years ago. It became a House of cards, that is a House of low-caliber characters. A bunch of jokers in a deck that, to call a spade a spade, has few hearts, fewer diamonds, just insiders in private clubs who consume billions and trillions of tax dollars on nonsense, waste, and silliness. It all is about wasting the day every day, spending other people’s money without fear of an accounting, and making speeches and television appearances for egotistical self-aggrandizement until one day they finally are defeated at the polls and instantly are forgotten.

If the ancient Jews of the Torah devoted their days following the Clouds of Glory and their nights following the Pillar of Fire on a journey to the Promised Land, these Pelosi Mediocrities spend their every waking moment passionately clawing for ephemeral power, following the Yellow Gold Road to Ephemeral City. How quickly they all will be forgotten in time! Can you name five congressional representatives who served in the House between 1860 and 1960?

Two weeks ago it was as clear as it is now that there is no 67-vote impeachment conviction conceivable. Donald Trump is about to be acquitted yet again. There is no shame in acquittal. The shame lies only in Pelosi’s minions perpetrating endless shenanigans in times when so much is at stake.

Any Republican who understands the politics of Maine and the loyalty of Susan Collins when all is on the table not only gives her a pass on how she votes over impeachment but regales that the impeachment gives her a chance to secure her Maine Senate seat for next time again, bolstering her with Independents. Everyone knows Mitt Romney is a small man who is jealous and envious, driven by his obsessive perception that a boor like Donald Trump could accomplish so much more and be so much more deeply loved than an elegant, debonaire gentleman like the former governor of Massachusetts. Everyone knows that Ben Sasse is an oppositional sort, a Don Quixote on a march through perdition for a heavenly cause that only he understands. But he is a good guy when it counts, so let him hum “The Impossible Dream” all he likes. Pat Toomey has a Susan Collins challenge: he is the only other Senate Republican in all the Northeast, and he very possibly is angling to run for governor as he prepares to depart from D.C. Like Collins, the impeachment gives him a chance to establish bona fides among Pennsylvania Independents and moderate Democrats. So give the man a pass.

And Murkowski. Her incredibly unpopular dad, one-term Alaska Gov. Frank Murkowski, appointed his little girl to take his Senate seat when he left D.C. to seek the state house. By reelection time in 2006, his statewide popularity had sunk to 19 percent, and he came in third of three candidates in the GOP gubernatorial primary. He lost by the widest margin of defeat ever sustained in American history by any incumbent Republican governor ever to lose a primary. In 2010, Alaska Republicans rejected Lisa, nominating her opponent instead. Unable to seek reelection as a Democrat either, she ran a gutsy statewide write-in campaign, split the Republicans, pulled some Democrats who remembered her father’s surname, and barely eked a win after a six-week court battle. She is the moaner Lisa, aware that Alaska Republicans always are inching to reject her, leaving her to rely on Democrats writing her in. So she does what she does.

With 45 of 50 Republicans voting to throw out the impeachment article before a Senate trial even begins, there are at most 55 votes to convict, while Pelosi and her Senate lap dogs need to reach 67. It is not close. It will not be close. But it will force Joe Manchin to cast a vote that West Virginians will consider when he comes for reelection in that deep red state in 2024.

So why are Pelosi and Schumer even bothering? In “The Masque of Pandora,” Henry Wadsworth Longfellow attributed to Prometheus the words: “Whom the gods would destroy they first make mad.” Brigham Young used the expression, too, which might be worth a moment’s thought in the Romney household. And part of it is that the Democrats are destroying themselves by marching madly in a froth of hate. They just lost 10 seats in the House, with the GOP winning 13. Their majority has dropped from 232-197 to 222-212. Just five or six seats are left to turn at the 2022 midterms, and Pelosi can go back to San Francisco and gavel her $15-a-quart ice cream. They lost mightily on a record of impeaching Donald Trump, supporting Black Lives Matter and Antifa, and promising to defund the police (except for the ones protecting them).

As usual, in November they promised their most gullible voters that they would do things differently this time and attend to the people’s business. Yet right away, they are back to impeaching — second verse same as the first — now seeking to oust an apparition, to evict from the Oval Office a man enjoying the Florida sun at Mar-a-Lago nearly a thousand miles away. What motivates this insanity, an impeachment that was hopeless and meaningless when I analyzed it two weeks ago, and that is exactly the same now? It is motivated purely by venom, by blind hate, by such a blind hate that most Democrats do not really know even why they are doing it. They just are. It goes back to Rep. Al Green and Rep. Maxine Waters demanding Trump’s impeachment before they even could articulate enough grounds to persuade Pelosi.

The Democrats’ hope is to sling dirt at Donald Trump, just to throw mud at him. Many of us remember this mindset from our days in nursery school or kindergarten. In the House, they presented no witnesses and perpetrated an “impeachment” in a day. Now to the Senate, where they will do … uh, what exactly? Call witnesses? Have speeches? And for how long — a week? Two?

When it all is over, they will not have won over 12 more Republican votes to convict, but they will have forced Joe Manchin to vote — either to destroy his career in West Virginia or publicly to embarrass Pelosi and Schumer by giving Trump’s annual acquittal a bipartisan flavor. They will have won more sympathy for Trump, just as their last impeachment did. They will do what Facebook and Twitter and Amazon Web Services tried to stop: they will keep Donald Trump in the center of the American consciousness while Biden bumbles his way through executive orders that win the Republicans more votes among normal mainstream married White suburban mothers who do not want their school girls entering bathrooms with others alongside them who are equipped with biological male organs and do not want their daughters losing a fair playing field in school women’s sports.

When it all is over, Donald Trump again will be photographed brandishing newspapers with front-page headlines declaring “Trump Acquitted Again!” And back in D.C. the “Biden Honeymoon” and “Era of Good Feeling” will be buried for good, exposed as the mendacity it always was, beneath a morass of cynical impeachment, ongoing Hunter Biden revelations, and continued excuses for failing to combat COVID any better — and possibly worse — than the man who helped the world acquire a strong vaccine at warp speed.