by Steven Greenhut
Police at shutdown protest in Huntington Beach, California, May 1, 2020 (mikeledray/Shutterstock.com) 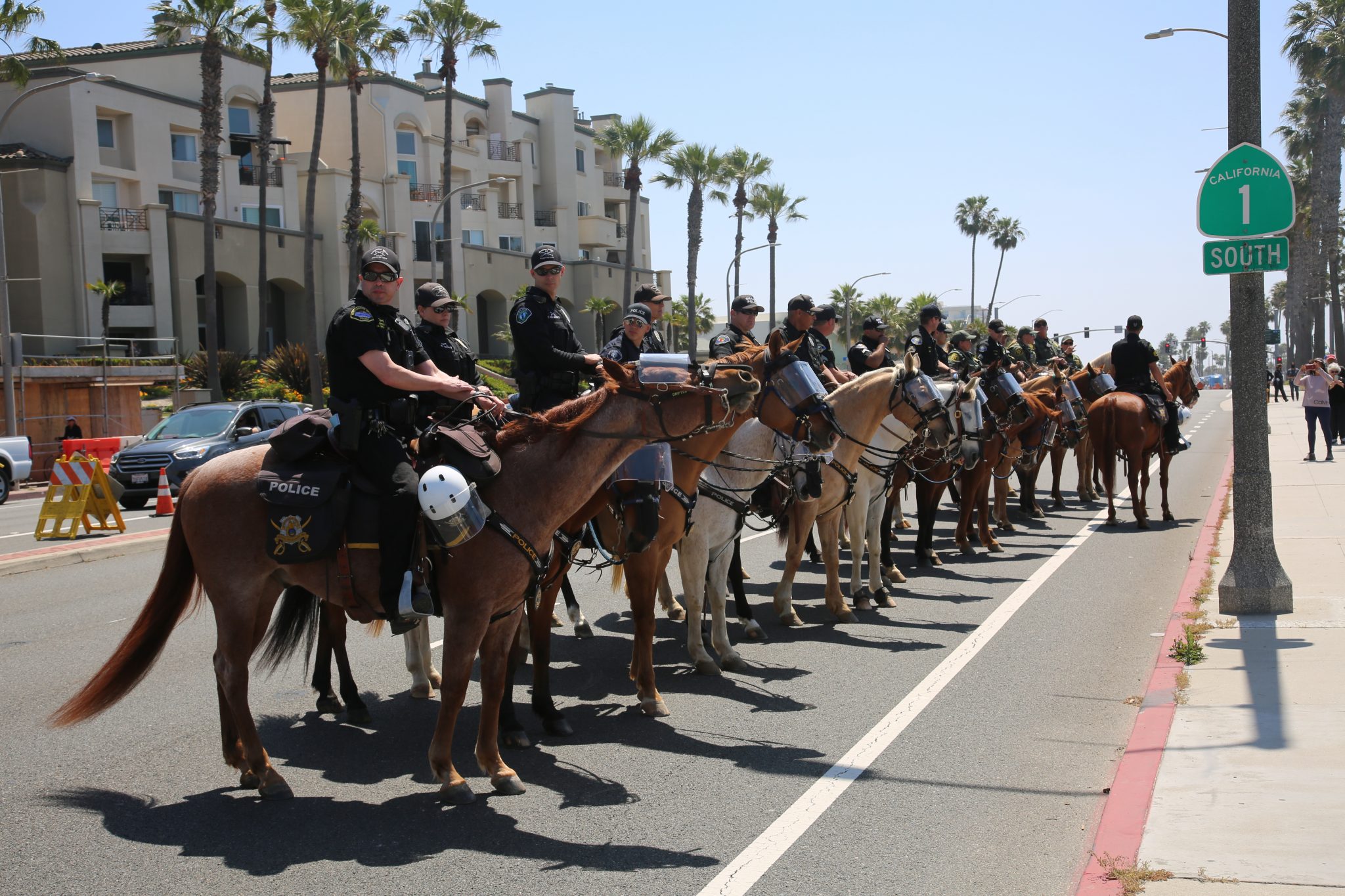 Gov. Gavin Newsom has imposed one of the strictest economic lockdowns in the country, which has suspended most economic activity in a state that is unusually dependent on capital-gains revenues. Now that the price is coming due — a $54 billion budget hole and free-falling public-pension plans — he wants residents of better-managed states to bail out his profligacy. I’m guessing the Trump administration is getting a good laugh out of that one.

If U.S. representatives from places such as Montana and Georgia don’t willingly give our so-called “nation-state” the goods, Newsom warned, terrible injustices will happen. “I hope they’ll consider this, the next time they want to salute and celebrate our heroes and first responders, our police officers and firefighters, consider the fact that they are the first ones that will be laid off by cities and counties,” Newsom said during a recent CNN interview.

Bailing out California means throwing a life raft to these spending fantasies.

This is a common government shakedown tactic. Give us more money, or we’ll fire the front-line workers who provide services that the public actually values. It’s the state version of the Washington Monument Syndrome — when the government closes tourist attractions during those government “shutdowns.” It doesn’t shutter faceless bureaucracies, deny new toys to military leaders, or fire congressional staff. Instead, officials impose pain on the public.

Even so, the police-and-fire shtick should be getting old by now. Conservatives have seen how police forces behave, with riot-gear-clad officers dispersing peaceful protesters and handcuffing people surfing or playing ball with their kids in the park. As someone who has reported extensively on police use-of-force issues, I’ve found such actions to be common in California. And police unions often protect the worst actors. There’s reason enough to question some of the “heroes” rhetoric, even before we look closely at the financial numbers.

Newsom didn’t mention that the average compensation for government firefighters at the city and county level is around $200,000 — and approaches $250,000 in some municipalities. For fun, peruse the data on the Transparent California website, where you’ll find page after page of, say, fire captains receiving total packages (pay, overtime, benefits) ranging from $400,000 a year to $677,000 a year. Not bad for a short week and a job that pays you while sleeping.

In reality, municipalities had already been cutting services, raising taxes, and laying off their workers before COVID-19 came along, as public-safety budgets gobbled up ever-larger chunks of their general funds. I’ve reported repeatedly on the deep financial problems caused by 1999’s Senate Bill 400, which retroactively increased police, fire, and prison pensions by as much as 50 percent. Each year, cities pay the pension funds more. When cities try to get out from these deals, the fire unions react severely.

Those “3 percent at 50” retirement deals provide police, firefighters, and prison guards with 90 percent of their final years’ average pay (before pension-spiking gimmicks) forever, making every one of them a virtual millionaire. Before you write to complain, calculate the savings you would need in the bank to receive $100,000 or more a year for the next 35 years or so. Police and fire retire at 50 and — despite the nonsense spouted by their unions — live well into their 80s, based on California Public Employees’ Retirement System (CalPERS) data.

The profiteering, however, is widespread among all types of job categories. Adam Andrzejewski, CEO of OpenTheBooks.com, found 340,000 California public employees earning above $100,000 a year, at a cost to taxpayers of around $45 billion a year. “Our auditors … found truck drivers in San Francisco making $159,000 per year; lifeguards in LA County costing taxpayers $365,000; nurses at UCSF making up to $501,000; the UCLA athletic director earning $1.8 million; and 1,420 city employees out-earning all 50 state governors ($202,000),” he wrote in a Forbes column.

We always hear about the hard-pressed public schools, yet the watchdog group found nearly 11,000 California community college educators receiving six-figure salaries and nearly 110,000 K-12 teachers and administrators topping $100,000 a year — including 15,735 of them who currently are receiving six-figure pensions. As Andrzejewski added, Newsom announced 10-percent public-employee pay cuts to deal with the deficit, but “admitted that if the federal government sends states more aid, then the salary reductions will be restored.”

Yes, that’s the perfect argument against the feds bailing out California. Why should taxpayers in other states pay for this insanity?

The only time I’ve seen state officials make tough economic choices is during a downturn, when they had no other choice. After the crisis passes, they go back to business as usual. Remember that Newsom and his fellow Democrats had previously talked about creating a single-payer health-care system that the Senate estimated would cost more than the state’s entire annual general-fund budget. Bailing out California means throwing a life raft to these spending fantasies.

As a Californian, I know what denying a federal bailout will mean. I’m not worried about cutbacks of the number of government bureaucrats or slicing programs that I would never use, but do realize that Newsom and his allies likely will seek large tax increases. That’s awful, but I choose to live here so I have to pay the price for it. But unless you live here also, you shouldn’t have to pay more to keep our public employees living like the landed gentry.