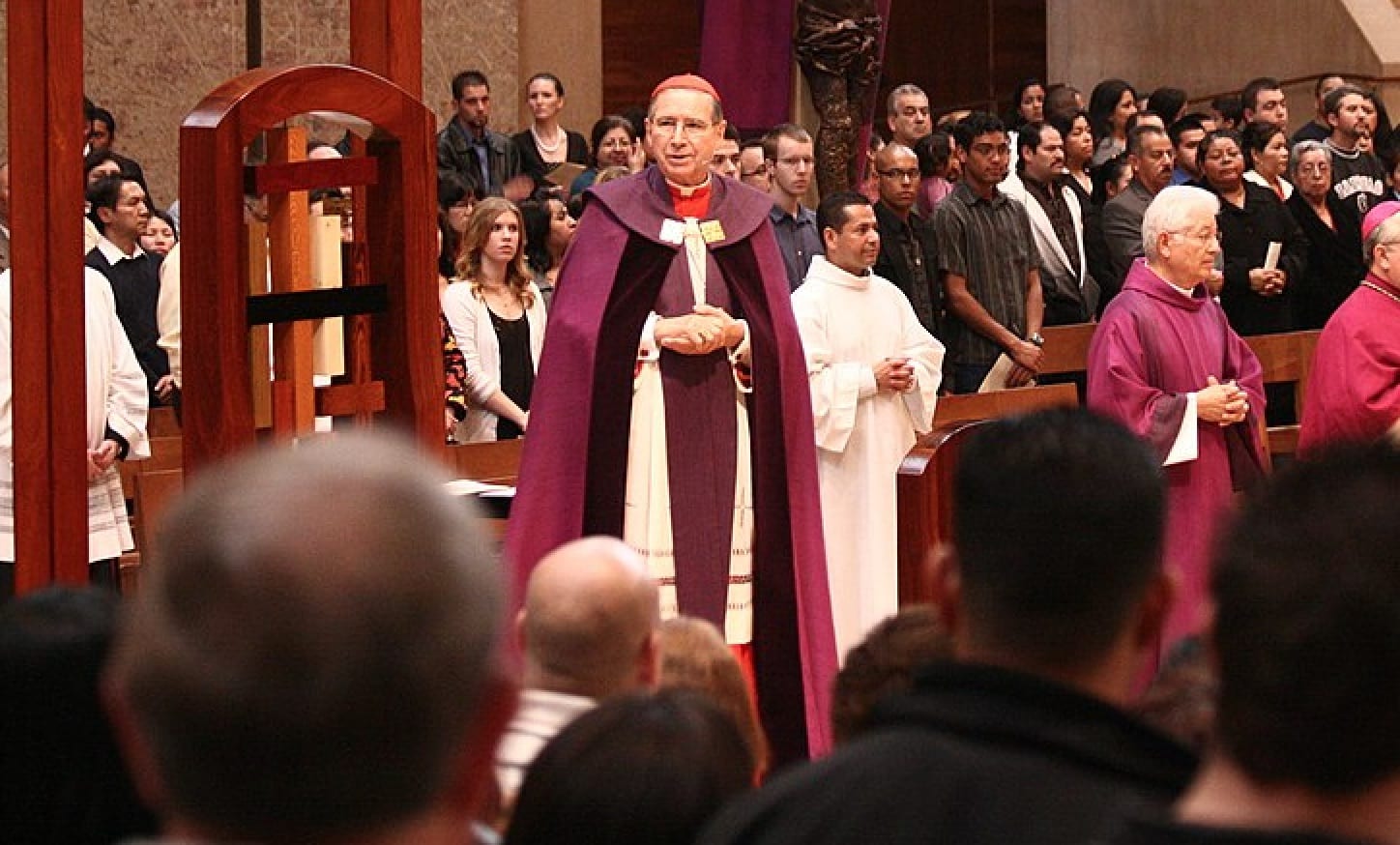 Former Los Angeles Cardinal Roger Mahony is long retired, but his scandals keep exploding like ticking time bombs around the feet of his successor. The latest eruption was this week’s revelation that Mahony had elevated Monsignor Alexander Salazar to auxiliary bishop in 2004 despite a credible allegation of abuse against Salazar from the 1990s. Mahony’s successor, Archbishop Jose Gomez, announced that Salazar’s resignation flowed from “deep concern for the healing and reconciliation of abuse victims and for the good of the Church’s mission.”

The Church has known about the allegation against Salazar for at least 13 years and in all likelihood much longer, but only got around to forcing Salazar’s resignation this week, presumably out of a PR need to tidy up such cases before Pope Francis’s “abuse summit” next February, and perhaps also out of fear of exposure by approaching investigators.

In anticipation of that gathering in February, Pope Francis vowed in a speech before cardinals this week that abuse cover-ups would “never” happen again, a promise that he can’t even keep in the most obvious case — the ongoing scandal of Theodore McCarrick, who remains holed up in a Kansas friary next to a school and tourist site while his criminal defense attorney issues protestations of innocence to the press in his name. Never happen again? The cover-up is happening right now.

Salazar, by the way, is only the most recent Mahony-era auxiliary bishop to disgrace the Church. Mahony really knew how to pick them: in addition to Salazar, he selected Gabino Zavala, who had a secret family, and then earlier he selected Patrick Ziemann, a repeatedly accused molester whose ecclesiastical career was punctuated by an affair with an embezzling priest at one of his parishes (the priest also claimed coercion).

In 2004, Salazar was co-consecrated by Mahony and Zavala. Mahony had appointed Zavala to auxiliary bishop in 1994. It came out later that he had sired a couple of children from a mistress residing in another state. He resigned in 2012.

Salazar, Zavala, and Ziemann were Mahony’s kind of bishops — politically and theologically liberal, big on “social justice,” and mired in scandal. Mahony liked to keep bad priests close and the worst ones even closer. He made a molester known to him, Fr. Carl Sutphin, the associate pastor of his cathedral until prosecutors closed in on him.

Through Mahony’s string-pulling, Ziemann ended up a bishop. He went from Los Angeles to the head of the Santa Rosa diocese until ripped-off parishioners demanded his resignation in 1999. The police discovered that Ziemann had outfitted his embezzling priest-boyfriend with a special beeper for spur-of-the-moment sexual demands and had concealed his larceny during the throes of their affair. By the time Ziemann left the Santa Rosa diocese, it was $16 million in debt. Outraged parishioners wanted him prosecuted, but Vatican officials rode to his rescue and whisked him into a safe retirement. He was later hit with multiple molestation charges, dating to his days as dean of studies at a high school seminary in Los Angeles.

Salazar and Zavala might have received their own dioceses too had they managed their affairs a little more discreetly. I found an old story from a Utah paper purring over Salazar as a possible future bishop of Salt Lake City. But it turns out that Salazar, according to the Church’s latest admission, was under “precautionary” measures during his time as an auxiliary bishop, whatever that means. In other words, the Church knew perfectly well that he was a credibly accused molester and decided to let him retain his lofty title anyways. The utterly scandalous arrangement was overseen in part by Cardinal William Levada, an old crony of Mahony’s who conveniently assumed the top position at the Congregation for the Doctrine of the Faith the year after Salazar’s elevation.

Levada, Mahony, and Ziemann all came out of the same rotten 1960s-era seminary in Los Angeles, St. John’s, and had been trading favors for years. Before Pope Benedict XVI inexplicably promoted Levada to the head of his doctrinal office, Levada served as the archbishop of San Francisco, where he too had a molesting priest on his cathedral staff. Out of all these intersecting friendships from seminary days came a golden parachute for Ziemann after he got bounced from Santa Rosa. Levada oversaw Ziemann’s landing far from police in the Arizona desert, where he joined the “artsy party circuit in nearby Tucson” until his death, reported the journalist Ron Russell.

All of this is beyond the grimly satirical imagination of Evelyn Waugh, and the Church hasn’t even hit bottom yet. The news out of Illinois this week — its attorney general says that Illinois dioceses excluded at least 500 cases from their self-accounting of alleged priestly abuse — hints at the many revelations to come from unfolding state investigations across the country. In the recent resignations of auxiliary bishops from New York (Bishop John Jenik) to Los Angeles (Bishop Salazar), one can already see the effects of that pressure. Both Cardinal Timothy Dolan and Archbishop Gomez knew that grand juries would eventually find out about the abuse allegations against their auxiliaries and apparently urged the Vatican to cut them loose sooner rather than later.

The Vatican has been spinning the abuse scandal as a relic of the “past.” But almost all the figures responsible for it remain highly visible in the present — even Mahony got his chance at the microphone in Baltimore at the fall bishops’ gathering — and they continue to exercise real power. Here and there a derelict bishop drops out, but for the most part the hierarchy stumbles on as a club for the compromised and the corrupt in which yearly membership is earned through mutual complicity in the cover-up.