COVID-19 has produced three great tragedies in the U.S. The public is aware only of the first. Two greater tragedies are carefully ignored by the press.

For the past 18 months, Americans have been bombarded on every platform and news outlet with the threat to our lives of coronavirus disease. First noted in late 2019, the virus acquired the name COVID-19 or simply COVID.

The first tragedy was a big lie, a false, manufactured narrative, that was probably initiated by leakage of an enhanced-function virus from a Wuhan, China-located, U.S.-funded research laboratory.

Washington fabricated misleading numbers to exaggerate health dangers. Daily reporting of COVID cases implies seriously sick or dying people. In fact, a “case” refers to a person, usually asymptomatic, who has the viral antigen in their blood. Cases does not include tens of millions of healthy Americans who had or have COVID, were not tested, recovered from the infection, and now have immunity. [For more data on these groups of people, look at these studies here and here.]

“Deaths” are people who also test positive, most of whom died with the virus but not because of it. The majority of deaths were people who succumbed to their pre-existing conditions such as immune deficiency, diabetes, chronic lung disease, heart or kidney failure, and age over 75 years. A report from Italy showed that only 12 percent of COVID deaths were actually because of viral infection. Recall the motorcycle crash victim who was listed as a COVID death because there was antigen in his blood.

By March 2020, the biology of COVID-19 was established, especially the risk factors. Risk of death from COVID in healthy children is virtually zero. For healthy adults, the risk is similar to the seasonal flu. COVID is only a significant danger to those with serious or life-threatening pre-existing conditions noted above.

Washington’s response to COVID was completely out of proportion to the actual danger and created the second tragedy. Federal politicians and bureaucrats, the latter represented by camera-addicted Fauci, followed Rahm Emanuel’s political aphorism, “You never want a serious crisis to go to waste.” By making a bad flu-like illness seem like Ebola (90 percent mortality), Washington created the appearance of an existential crisis. This forced the federal government, “for the good of the people,” to impose pseudo-martial law.

The second tragedy was what Washington did to us by its supposedly anti-COViD mandates. Americans were forced to obey … or else. Or else meant being canceled, locked out of work, refused restaurant service, banned from social media, and entertainment venues, denied air travel, and shunned by virtue signalers.

Socially distance. Stay in solitary confinement: away from work, play, or school. Mask up, including your children; better use two. Lockdowns for all except corporate giants and others with political connections. Get vaccinated (and prove it). Lately, make sure to get a third, booster shot, and prove that. And oh, by the way, we may need to resume national lockdowns.

The second tragedy, seeking to “flatten the curve,” produced an ironic consequence: suppression of the true cure for COViD. A brief description of viral biology clarifies.

When a virus infects a person, the immune system responds first with antibodies and later with T- and B-cells that recognize the virus as an invader and attack it. Both antibodies and cells react to the spikes — the arrows in left panel of Figure 1 — on the surface of the virus. 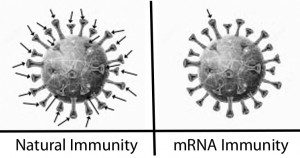 The Pfizer-BioNTech and Moderna vaccines confer immunity by providing the recipient with messenger ribonucleic acid (mRNA) that reacts to one specific spike on the virus (single arrow on right of Figure 1). If the virus mutates, viz., if the single, mRNA-specific spike is missing, the vaccine will not recognize and therefore will not attack the mutated virus.

Naturally acquired immunity recognizes and attacks a virus that has any one of the dozens of protein spikes. Natural immunity is much more protective than Washington’s vaunted mRNA vaccine-induced immunity.

Based strictly on the science, the U.S. should have let the virus spread through the general population. While the low-risk majority were developing natural herd immunity, we should have offered protective quarantine to high-risk individuals. Such an approach would have avoided the medical, financial, and social devastation we experienced.

Now comes the Delta variant, another exaggeration used to resurrect a fading crisis and thus justify Washington’s continued unconstitutional control. While Delta is indeed more contagious than original COVID, it is less deadly.

Had Washington followed the medical science, and not played for the political advantage, the third and greatest tragedy would have been averted: abrogation of the Bill of Rights.

Most egregious, using COVID as its justification, Washington took away our constitutional protection against federal overreach. “The powers not delegated to the United States by the Constitution, nor prohibited by it to the states, are reserved to the states respectively, or to the people.” If Washington abided by this Tenth Amendment, they could not tell us what to wear, what to say, where to go, with whom to associate, or how to pray. They most certainly could not require Americans to take an experimental CoViD vaccine.

Using a ginned-up pandemic crisis as an excuse, Washington politicos took away Americans’ first, highest, and most precious right: freedom. And, we did nothing.

That is the greatest tragedy of all.

Deane Waldman, M.D., MBA is Professor Emeritus of Pediatrics, Pathology, and Decision Science; former director of the Center for Healthcare Policy at Texas Public Policy Foundation; and author of the multi-award-winning book Curing the Cancer in U.S. Healthcare: StatesCare and Market-Based Medicine.