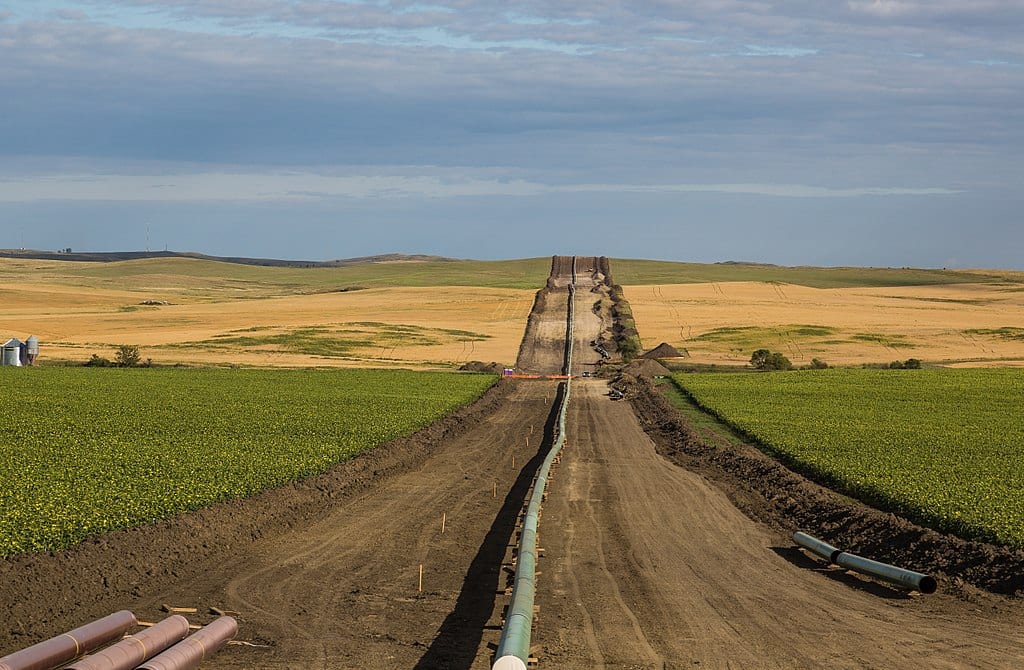 There are a couple of articles, one at the New York Times and the other at Reuters, which are required reading for anyone who isn’t aware of perhaps the greatest American economic victory in recent times.

There was a War for Oil, for the benefit of our friends who remember fondly the protests from the previous decade, and we won — without firing a shot.

A substantial rise in oil prices in recent months has led to a resurgence in American oil production, enabling the country to challenge the dominance of Saudi Arabia and dampen price pressures at the pump.

The success has come in the face of efforts by Saudi Arabia and its oil allies to undercut the shale drilling spree in the United States. Those strategies backfired and ultimately ended up benefiting the oil industry.

Overcoming three years of slumping prices proved the resiliency of the shale boom. Energy companies and their financial backers were able to weather market turmoil — and the maneuvers of the global oil cartel — by adjusting exploration and extraction techniques.

After a painful shakeout in the industry that included scores of bankruptcies and a significant loss of jobs, a steadier shale-drilling industry is arising, anchored by better-financed companies.

With the price of West Texas intermediate crude above $65 a barrel, a level not seen in almost three years, the United States is becoming a dominant producer. It is able to outflank competitors in supplying growing global markets, particularly China and India, while slashing imports from the Middle East and North Africa.

A few years ago, the U.S. oil patch came under attack by OPEC, the international cartel of state-owned Third World oil companies from places like Saudi Arabia, Iran, Venezuela, Iraq, Nigeria, and several others. OPEC decided to ramp up production despite a relatively soft global demand in an attempt to drive the myriad of independent companies which make up a huge chunk of the American shale production sector out of business.

It was a war. There isn’t really a better way to describe it. And there were casualties. Lots of them. Tens of thousands of Americans lost their jobs, and a large number of those independent oil producers got introduced to the bankruptcy laws.

And unlike those cartel companies run by flunkies of the local potentate, the U.S. oil industry couldn’t run to the government for sovereign wealth fund investment or some other bailout. Instead, they had to find a way to survive.

They did. U.S. shale won the great global oil price war, because eventually the Saudis and the others couldn’t afford to lose money on oil they were dumping at garage sale prices when selling that oil was the major means of funding their welfare states.

Production went down. Prices went up — a little. But the old dynamic, in which OPEC could set its own prices by a vote of the oil ministers, was broken. Back to the Times…

“OPEC missed the point,” said René Ortiz, a former OPEC secretary general and former Ecuadorean energy minister. “They thought they could recover the U.S. market by bringing the prices down. Now the U.S. has gained the leading position in the world oil market regardless of what OPEC does.”

A week ago, OPEC leaders met in Oman to discuss a probable extension of production cuts into 2019 to support prices. Their biggest obstacle is the United States.

Shale plays are much different animals to the gigantic prospects which used to dominate the exploration of oil. A relatively small, independent oil company can drill and produce using modern hydraulic fracturing methods in a short period of time and for a lot less initial investment than in the old days. What that means is when the price of oil ticks up, the shale players in places like the Eagle Ford, Permian Basin or Bakken fields can execute very quickly to get production on line. So while the old dynamic used hold that OPEC would turn their spigot on and off at will, this time turning the spigot off ultimately resulted in losing market share to American oil.

This year it’s projected the United States will produce more oil than ever. We’re likely, by the year’s end, to be churning out more than 10 million barrels a day (the Energy Department thinks it’ll be as much as 11 million barrels a day) — which could put us in a position to surpass the Saudis as the second-largest oil producer on earth. The Russians still lead the world, for now, in that number, at about 10.9 million barrels a day.

Which is why Venezuela, which is in a state of abject economic collapse, can crater its state-owned oil company’s production through corruption and incompetence — the Venezuelans have imploded their production from three million barrels a day to 1.8 million — without the world oil market suffering price shocks.

That’s a huge, huge change from what you thought you knew about the oil industry. If you grew up in the 1970s or before and remember gas lines across the country, or if you remember the national flirtation with burning corn for automotive fuel during the runup in energy prices toward the end of the second Bush administration, then you’re conditioned to worry about war in the Middle East and what it will do to you at the pump. The new reality is that America is flexing its muscles in the oil market and soaking up market share, and what’s happening in the Arab world is less and less important than in our lifetimes.

Which brings us to the Reuters piece mentioned above…

In the two years since Washington lifted a 40-year ban on oil exports, tankers filled with U.S. crude have landed in more than 30 countries, ranging from massive economies like China and India to tiny Togo.

U.S. producers now export between 1.5 million and 2 million barrels of crude a day, which could rise to about 4 million by 2022. The nation’s output is expected to account for more than 80 percent of global supply growth in the next decade, according to Paris-based International Energy Agency.

Much of the increased flow will go to China, the world’s top importer and, since November, the largest buyer of U.S. crude other than Canada.

We’re not a net exporter of oil yet. We’re still importing, on net, about four million barrels a day. But that’s down from about 12.5 million barrels a day in 2005, before the shale revolution began. And the U.S. oil market has all but frozen OPEC out; while the cartel used to make up the majority of imports to the U.S., now it’s down to just 37 percent and continuing to drop.

It’s a success story which transcends politics, though given the Trump administration’s efforts to both deregulate the industry and open up federal lands and waters to more drilling, this economic rout of foreign competition is poised to continue if not expand. So far, politicians have been mostly bystanders.

This is a triumph not of policy, but of private sector innovation. We should appreciate it as such and cheer it on, regardless of our ideology.