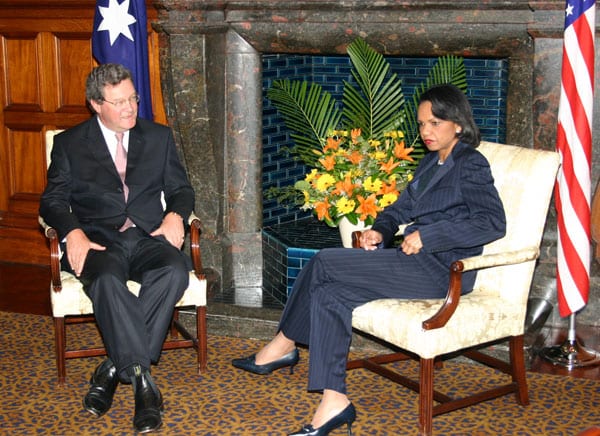 To paraphrase Humphrey Bogart in Casablanca, of all the gin joints, in all the towns, in all the world, George Papadopoulos, an adviser to the Trump presidential campaign, had to walk into London’s Kensington Wine Rooms in May 2016 where he got drunk and told Alexander Downer, Australia’s High Commissioner to the UK, that Russia had “dirt” on Hillary Clinton and many of her emails.

Downer reported this conversation to U.S. authorities in late July 2016. According to former FBI Director James Comey, this report — and not the dossier paid for by the DNC and the Clinton campaign — was the seminal event that raised concerns about Donald Trump’s ties to the Russians and the major reason it launched its counterintelligence investigation of the Trump campaign.

But how did Papadopoulos’ fateful meeting with Downer come about? And what prompted Downer to report this drunken blather to U.S. intelligence?

To answer these questions, it is helpful to go back to February 2006, when then Australian Foreign Minister Alexander Downer — yes the same guy who happened to be in that London gin joint — and former President Bill Clinton signed a Memorandum of Understanding between the Australian government and the William J. Clinton Foundation by which Australian taxpayers would pay up to $25,000,000 to fight the spread of HIV/AIDS in China, Vietnam, and Papua New Guinea.

In September 2016, Michael Smith, an Australian investigative journalist and former police detective, reported that this agreement opened the door to the mishandling of millions of dollars by the Clinton Foundation. According to Smith, shortly after the Memorandum of Understanding had been signed, the Clinton Foundation incorporated an entity to fight AIDS in Papua New Guinea. In July 2006, that entity, the Clinton Foundation HIV/AIDS Initiative (“CHAI”), entered into a funding agreement with the Australian government to receive $10,000,000. Under that agreement, CHAI was to begin work in August 2006.

Even though CHAI already had the contract, the Australian government later published an invitation for bids to perform the exact same task. As noted by Smith, this kind of pre-textual advertising is deceptive and a classic marker for fraud. Applying Australian law to this process, Smith concluded, “Inviting tenders [bids] for a contract that has already been given meets the criminal points of proof for Obtaining a Financial Advantage (for self or another) by Deception. It’s a cover up, something that is not what it purports to be.”

In July 2009, the CHAI program was audited. While noting the program’s positive aspects, the audit questioned the manner in which the contract was awarded and then left unmanaged. The report pointed out that there was “no stated objective/outcome” in the agreement or any subsequent program documents. In the absence of a clear statement of objectives, “it is not possible to say with any degree of confidence whether CHAI has been effective.”

In short, the audit described yet another taxpayer-funded Clinton Foundation boondoggle where nobody knows how the money was spent. This one was served up to the Australian taxpayers by none other than the same Alexander Downer who ten years later would just happen to cross paths with George Papadopoulos while Bill Clinton’s wife was running for president. And also by happy chance, Downer was able to help the Clintons by getting a drunken Papadopoulos to talk about about the Russians having dirt on Mrs. Clinton. What a remarkable string of coincidences!

But, among us old law enforcement types, there is a tried and true axiom that, in life, there is no such thing as a coincidence. Which raises the question as to whether Downer’s conversation with Papadopoulos was a matter of serendipity or part of a carefully orchestrated scheme calculated to benefit the Clinton campaign. Consider the following:

In October 2017, Papadopoulos pled guilty to a one-count information for lying to the FBI about the timing and extent of his interactions with one Joseph Mifsud, a Maltese-born British academic. At that time, Special Counsel Robert Mueller’s office filed under seal a “Statement of the Offense” in which the government and the defendant stipulated to certain facts. Among these was the following:

All of this raises many questions.

Did Mifsud’s information about the Clinton “dirt” and emails come from the Russians or someone else? If someone else, who? What was his motive in telling Papadopoulos about it? Did Mifsud dangle this story in the hope that Papadopoulos would repeat it?

How did Papadopoulos’ May 2016 meeting with Downer occur so soon after his April 26, 2016 meeting with Mifsud? Were these events coordinated? Was Downer’s meeting with Papadopoulos a chance encounter or was it arranged in advance? It is reported that an official at the Israeli embassy introduced Papadopoulos to Downer. Was this done at Downer’s request? If so, why? Put another way, why would Australia’s top diplomat to the UK want to meet with a peripheral, low-level adviser to the Trump campaign?

Was Downer instructed to arrange the meeting? If so, by whom? The FBI, CIA, MI-6 or some similar intelligence agency? The Clinton campaign?

Was Downer briefed by any agency on how to conduct the meeting or the questions to be asked? Was he wired? Is there some other official record of the meeting? To whom did he report the results of the meeting?

Did Downer really wait two months to report his conversation with Papadopoulos to the FBI? If so, why? Did he report Papadopoulos’ statements to the Clinton campaign or others working on behalf of its interests?

We now know that, in September 2016, Stefan Halper, a Cambridge University professor and confidential informant for the FBI, invited Papadopoulos to a meeting in London. Halper offered to pay for Papadopoulos’ flight and hotel and offered to pay him $3,000 to write a policy paper on a Middle East gas field. When the meeting took place, Halper, acting in his undercover capacity, posed many random questions about assorted topics. But then, out of left field, he suddenly asked, “George, you know about hacking the emails from Russia, right?” Papadopoulos replied that he did not.

Did the FBI prep Halper for his meeting with Papadopoulos? Was Halper wired? Was he paid by the FBI? Were FBI funds used to pay for Papadopoulos’ trip to London and for the policy paper?

There are a thousand other questions that come to mind. But suffice it to say that, taken in sequence, these meetings with Mifsud, Downer, and Halper raise a reasonable inference that Papadopoulos was manipulated to repeat a planted, fictitious story about Clinton dirt and emails in order to create the appearance of collusion by the Trump campaign with the Russians and a fabricated predicate for the FBI investigation of that campaign. Given that for the first time in this nation’s history the FBI and the Department of Justice have conducted electronic surveillance of a presidential campaign and used at least one undercover informant to infiltrate and spy on that campaign, it is certainly fair to conclude that stranger things than the possible duping and manipulation of George Papadopoulos have happened.

George Parry
Follow Their Stories:
View More
George Parry is a former federal and state prosecutor who practices law in Philadelphia and blogs at knowledgeisgood.net.
Most Popular
1
Dismal Science
The Biden Administration: Sophistry in Motion
by Frank Schell