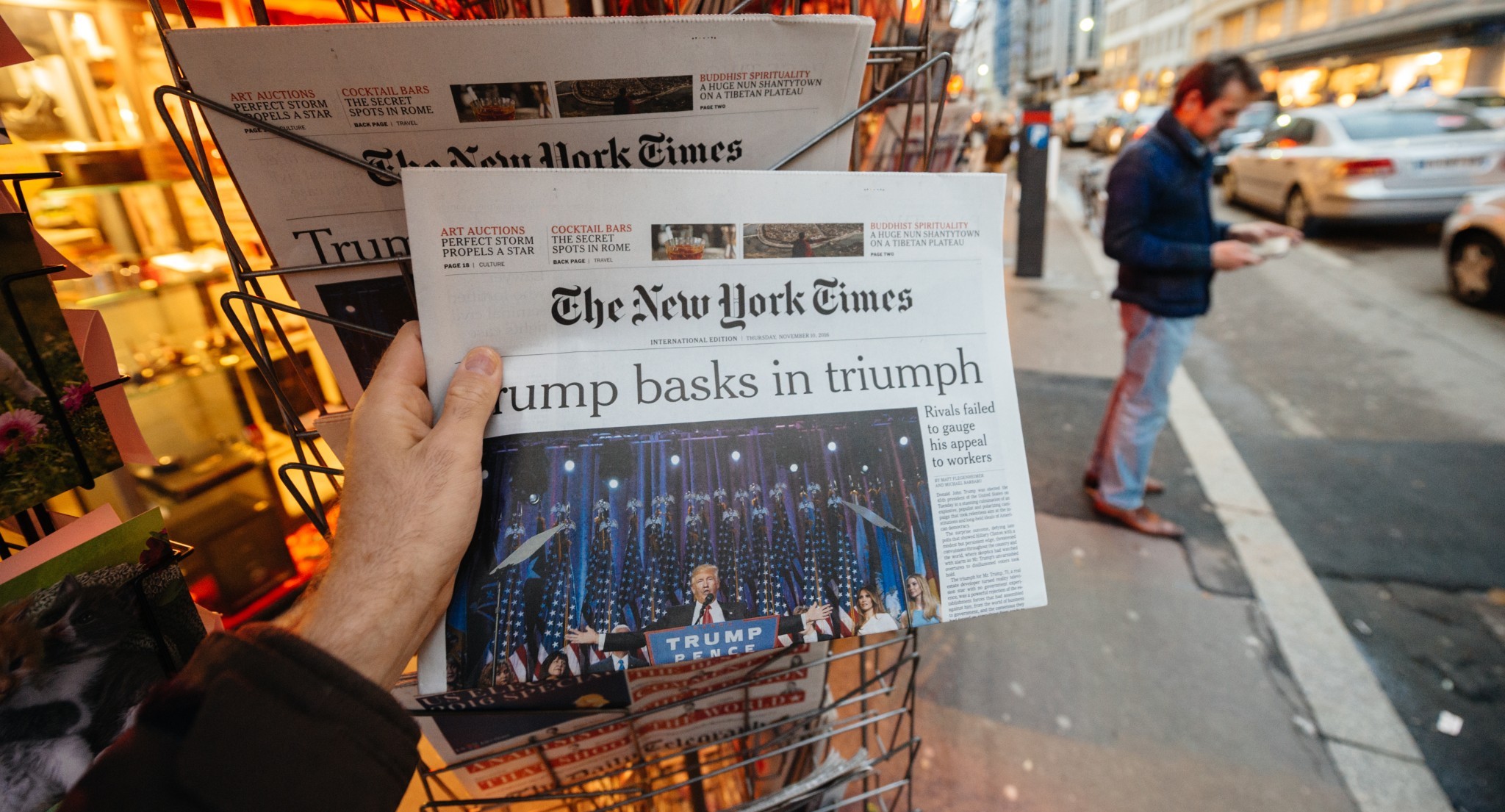 As President Ronald Reagan might say, “there they go again.”

Here in my home state of Pennsylvania, a state rife with repeated and vivid examples of election fraud, the New York Times reported this the other day:

These fictions about rigged elections and widespread fraud have provided the foundation for new laws that make it harder to vote and insert partisanship in the vote count.

May I politely suggest that the Times reporters who wrote this article —Nick Corasaniti, Karen Yourish, and Keith Collins — take some time to read … the New York Times?

Specifically, I would call their attention to this front-page Times story from February of 1994. Here’s the headline:

Let me quote directly from the article, bold print supplied for emphasis:

In many instances, according to Republicans who testified during a four-day civil trial last week, Democratic campaign workers forged absentee ballots. On many of the ballots, they used the names of people who were living in Puerto Rico or serving time in prison, and in one case, the voter had been dead for some time.

In short, this is not “fictions about rigged elections.” This is fact. A written judgement from a sitting federal judge. And reported accurately by the New York Times.

And this example of voter fraud in Pennsylvania, as I have frequently pointed out, is far from alone. Yet again, let me supply a list:

From an official Department of Justice press release dated May 21, 2020:

A former Judge of Elections has been convicted for his role in accepting bribes to cast fraudulent ballots and certifying false voting results during the 2014, 2015, and 2016 primary elections in Philadelphia.

From another official Department of Justice press release, this one dated July 23, 2020:

A former U.S. Congressman was charged Tuesday in an indictment unsealed today, with conspiring to violate voting rights by fraudulently stuffing the ballot boxes for specific candidates in the 2014, 2015, and 2016 primary elections, bribery of an election official, falsification of records, voting more than once in federal elections, and obstruction of justice.

Michael “Ozzie” Myers, 77, of Philadelphia, Pennsylvania, is charged with conspiring with and bribing the former Judge of Elections for the 39th Ward, 36th Division, Domenick J. Demuro.   Demuro, who pleaded guilty previously in federal court in Philadelphia, was responsible for overseeing the entire election process and all voter activities of his division in accord with federal and state election laws.

In October of 2008, right here in this space, I reported this:

A retired Pennsylvania Supreme Court Justice says that she is ‘not confident we can get a fair election’ in the state come November.

Gleason was even more explicit.

‘Between March 23rd and October 1st, various groups, including ACORN, submitted over 252,595 registrations to the Philadelphia County Election Board’ with 57, 435 rejected for faulty information. ‘Most of these registrations were submitted by ACORN, and rejected due to fake social security numbers, incorrect dates of birth, clearly fraudulent signatures, addresses that do not exist, and duplicate registrations. In one case, a man was registered to vote more than 15 times since the Primary election.’

‘Voter fraud is no longer just a Philadelphia problem,’ Gleason said, with ACORN targeting key counties across the state.

In other words? Long, long before the 2020 election, Pennsylvania was repeatedly exhibiting severe and ongoing problems with election integrity. For the New York Times to blithely assert that all of this is nothing but “fictions about rigged elections and widespread fraud” is itself a fiction from what might be called “rigged election deniers,” or, to borrow from the liberal lingo of today on this subject, this New York Times story pushed the Big Lie about election integrity in Pennsylvania.

Even more telling is the upside-down and backward description of state lawmakers working to secure election integrity as somehow “anti-democratic.”

The Constitution is plain on the authority of state legislatures in presidential elections. Article II Section 1 reads explicitly this way, bold print supplied:

Each State shall appoint, in such Manner as the Legislature thereof may direct, a Number of Electors, equal to the whole Number of Senators and Representatives to which the State may be entitled in the Congress..”

The New York Times may not like it, but yes, in fact, state legislatures have the right to appoint presidential electors in their state in the manner they see fit. For Pennsylvania legislators to know — know with a 100 percent certainty — that their state has an absolutely dismal record of running honest elections more than justifies their right to take a serious investigative look at the 2020 election.

Says the Times of various legislators skeptical of the election integrity in 2020:

They have advanced, but not enacted, legislation that would make it easier for politicians to overturn elections. And it is only a minority of Republican lawmakers who promote the legally dubious view that they — and not the votes of the people — can select the electors who formally cast a ballot for the president in the Electoral College.

Note that phrase? This one:

They have advanced, but not enacted, legislation that would make it easier for politicians to overturn elections.

Which is to say, the Times dismisses the state legislative authority from the Constitution and transforms that authority into making it “easier for politicians to overturn elections.”

Can you say “anti-democratic”?

It has become increasingly evident that state legislatures — both here in Pennsylvania and elsewhere — are determined to make election security a major issue in their 2022 races.

By chance, the issue in Pennsylvania is getting even more oxygen as the Republican primary for the US Senate between Dr. Mehmet Oz and hedge funder Dave McCormick hangs by a thread, with, as this is written, a looming certainty of a recount and an Oz lead of just over — or maybe now under — 1,000 votes.

If there is anything — anything — that is true about Pennsylvania and its election system, it is that it is a mess. This latest snafu with the Oz-McCormick election only underlines the point.

Come November of 2022, Pennsylvania will have elected a new governor and state legislature. And it would seem more than reasonable — particularly with 2024 on the horizon — that their first priority come their swearing-in in January should be to make certain that at long last Pennsylvania has an airtight, seriously prompt election integrity system. The idea that elections in Pennsylvania don’t end with results announced on election night — but extends for days or even weeks — is inexcusable.

Without a sense of irony, the Times also said this:

Election and democracy experts say they see the rise of anti-democratic impulses in statehouses as a clear, new threat to the health of American democracy. State legislatures hold a unique position in the country’s democratic apparatus, wielding a constitutionally mandated power to set the ‘times, places and manner of holding elections.’ Cheered on by Mr. Trump as he eyes another run for the White House in 2024, many state legislators have shown they see that power as license to exert greater control over the outcome of elections.

Hello? Greater control over elections by democratically elected legislatures is decidedly the opposite of a “rise of anti-democratic impulses in statehouses.”

It would also seem more than reasonable that the New York Times and the liberal media get out of their bubble and actually report on the serious and repeated problems that are causing state legislators in Pennsylvania to demand free, democratic, and accurately reported election results.

But don’t hold your breath.

Jeffrey Lord
Follow Their Stories:
View More
Jeffrey Lord, a contributing editor to The American Spectator, is a former aide to Ronald Reagan and Jack Kemp. An author and former CNN commentator, he writes from Pennsylvania at jlpa1@aol.com. His new book, Swamp Wars: Donald Trump and The New American Populism vs. The Old Order, is now out from Bombardier Books.
Most Popular
1
The Right Prescription
The Roe Decision Won’t Save the Democrats
by David Catron