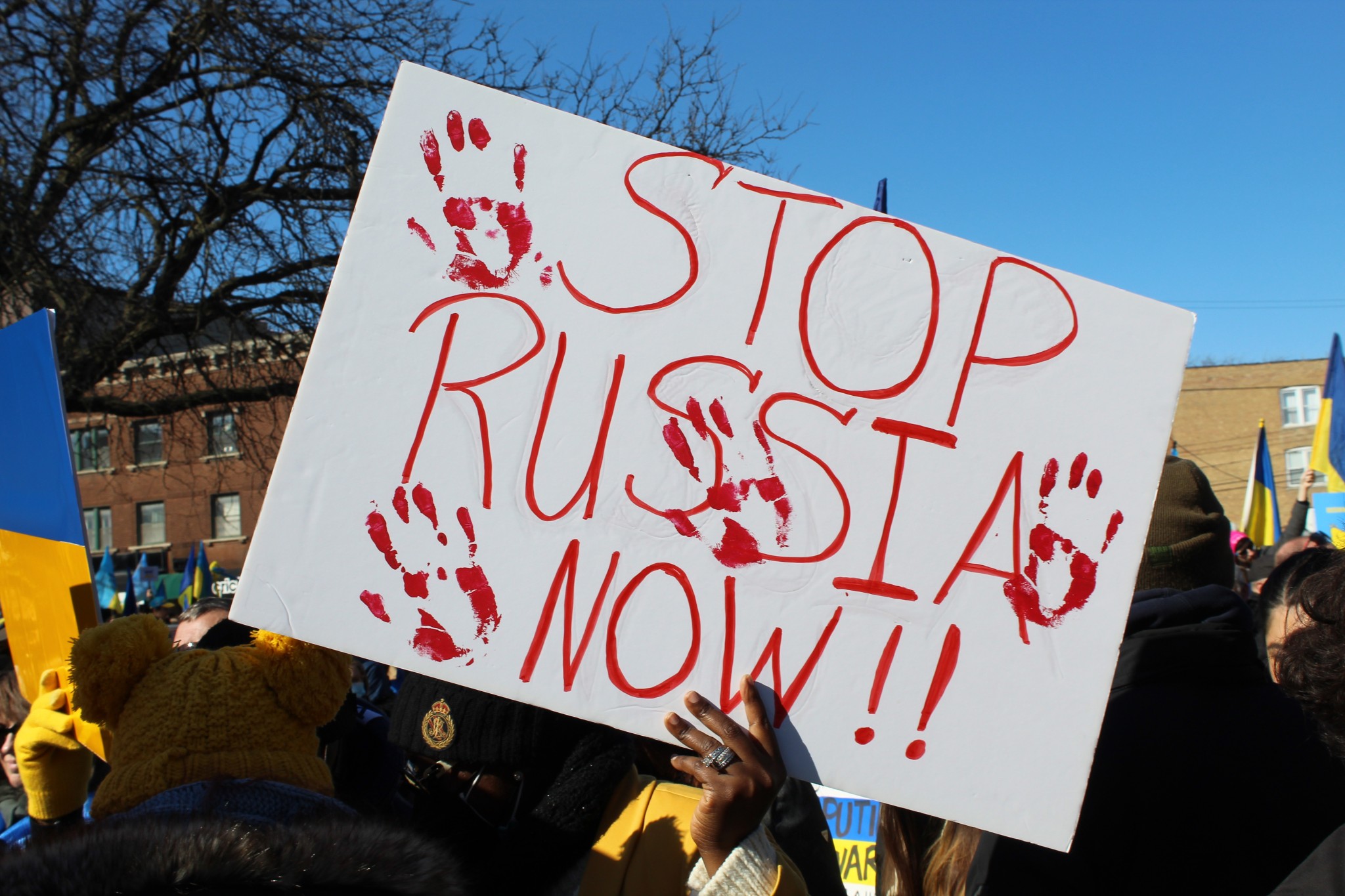 A particularly thoughtful student of mine expressed her concerns about the situation with Russia and Ukraine. She’s alarmed by Putin’s blatant aggression, with no doubt that he’s the bad guy. But she’s uneasy about being on the side of the American left on this issue. She knows how liberals and their media distort information. She knows how they get emotionally hyped up and cancel people. Not being inside Ukraine herself, she fears being misled.

I told her that I understand that caution, but to rest assured that she’s not wrong about Putin. Without provocation, Vlad the assailer and his Russian army invaded a neighboring country that has long suffered Russian injustice, especially during the last 100 years. In 1991, Ukrainians beautifully broke free of the Soviet jackboot, along with every other non-Russian Soviet republic in the period. The Cold War was over, and they were finally independent, and of right should be. Ever since, Vladimir Putin, who called the breakup of the USSR the “greatest geopolitical catastrophe of the century,” has licked his chops at the prospect of annihilating the Ukrainian people and pilfering this large territory. He wants it so bad that he has mercilessly invaded even Kyiv, decimated entire cities, and his troops rape and plunder civilians. Mad-dog Putin is a mentally unpredictable thug, and I have no doubt he’s capable of resorting to weapons of mass destruction and triggering World War III.

There’s no question, I assured my student. Putin is the bad guy.

And yet, she’s hesitant about being on the same side of the left. No doubt, that’s a troubling prospect. The left is vicious to those who don’t march in lockstep with its latest cause du jour. Leftists, of course, cancel people. It’s how they’re bent. They’ve done it to me and probably many of you. They pick their latest poison: same-sex marriage, transgenderism, any LGBTQ issue, BLM, COVID mandates, the November 2020 election. Be careful what you say on Twitter at any given moment because an unforgiving progressive will find a way to use it against you for the rest of your life. It could be used to ruin you.

Conservative radio host Andrew Wilkow observes how these people take the bait of authoritarianism every time. Give leftists the chance to flex authoritarian muscles to force you into compliance, and they’ll happily do it.

Well, they’re now doing it with Russia — the latest cudgel for liberals. Witness how they’re going after not only Americans who don’t sufficiently condemn Putin, but even ethnic Russians, in sports, business, music, and the arts. Note the cancellation of Russian soprano Anna Netrebko. She was dropped for apparently not adequately denouncing the person of Putin, even as she issued a statement asserting: “I am opposed to this senseless war of aggression and I am calling on Russia to end this war right now.”

The punishment of Netrebko was no profile in courage. Her cancellers have no idea how this woman fears for her life and family in Russia. Putin poisons dissidents. It’s easy to pound a keyboard from the safety of an office in Manhattan. It’s not easy to take on your homeland’s ruthless dictator who could target your loved ones. Good grief, cut the girl some slack.

Do I, or my student, want to be on the side of leftists who behave this way? Who bully? Who now intimidate and coerce with their handy Russia-Ukraine hammer? Are these our people? No, they are not. Of course, that’s no reason to defend Putin or sit silent as Russians rip up Ukrainians. You can’t. Still, it’s not pleasant to lay down with liberals who engage in intellectual thuggery.

All of which brings me to this crucial question: Why are leftists so adamantly anti-Putin?

Sure, there were some solid anti-communist liberals. I’ve heralded them in books: Harry Truman, John F. Kennedy, Bobby Kennedy, Scoop Jackson, Sam Nunn, Thomas Dodd, Pat McCarran, George Earle, Democrat heads of the House Committee on Un-American Activities like Martin Dies and Francis Walter, and even Woodrow Wilson, who was intensely anti-Bolshevik (see my book Dupes). But those individuals were too often the exception. Pro-Soviet and pro-communist progressives pushed many people out of the Democratic Party, such as Ronald Reagan. For every Harry Truman, there was a Henry Wallace, and then some. There were too many dupes, useful idiots, and what ex-communists called “suckers.”

OK, so why are leftists on the right side about Putin?

I think the answer has less to do with properly assessing brute aggression than the fact that current-day liberals hate Putin because they convinced themselves that bad-boy Vlad had conspired with orange-man-bad Trump to steal the 2016 election away from their beloved Hillary. Yes, I know — we’re now told by liberals that no one can entertain the tiniest suspicions about potential voter fraud in a presidential election. But that latest leftist standard was newly minted only during the last presidential election. Recall that in the prior four years, beginning in November 2016, it was an act of faith among leftists that a presidential election had been rigged and was illegitimate and needed to be overturned — the one that elected Donald Trump.

For four years after November 2016, tinfoil-hat liberals insisted that Putin and his Kremlin cronies had conspired to deny Hillary Clinton the White House and elect that “fascist” Trump. They eagerly sucked up your taxpayer dollars for a massive federal investigation that turned up a giant goose egg. Like 9/11 truthers, however, many remain certain of a conspiracy, this one cooked up at Lubyanka.

Current-day liberals hate Putin because they convinced themselves that bad-boy Vlad had conspired with orange-man-bad Trump to steal the 2016 election away.

It took that to sour our intrepid liberals on Vladimir Putin. Prior to that, liberals were not wailing about how bad Vlad was. Recall that their favorite president, Barack Obama, in 2012 had cozied up to former Russian Prime Minister Dmitry Medvedev, infamously promising him and his boss “more flexibility after the election.” The context of that vow by Obama is forgotten: he sold out NATO allies Poland and the Czech Republic in our planned joint missile-defense shield, bowing to Putin’s desires.

It was outrageous. And yet, liberals didn’t utter a peep of protest. Rather, they needed to perceive that the Kremlin had cozied up to Trump. Once convinced of that, they were all in for a Putin hate-fest. And no one can hate like a liberal.

Thus, predisposed to detest Vladimir Putin, for selfish political reasons, it wasn’t hard for liberals to veer to the right side in Russia’s war against Ukraine. Add the reality that Putin’s current White House adversary is a Democrat, and liberals are ready to gas up the tanks.

At long last, meet the new Russia hawks of the left. Welcome aboard, progressive boys and girls! It’s too late for them to become Cold Warriors, but they’re fired up to fight the Kremlin in 2022.

While I commend them for being right on this one, I don’t relish being on the side of people so lacking in charity and decency that they denounce as “racists” and “white supremacists” and “haters” anyone they disagree with. My preferred allies are people who don’t cancel and vilify others.

Paul Kengor
Follow Their Stories:
View More
Paul Kengor is professor of political science at Grove City College in Grove City, Pa., and senior academic fellow at the Center for Vision & Values. Dr. Kengor is author of over a dozen books, including A Pope and a President: John Paul II, Ronald Reagan, and the Extraordinary Untold Story of the 20th Century, The Politically Incorrect Guide to Communism, and Dupes: How America’s Adversaries Have Manipulated Progressives for a Century.
Most Popular
1
Biden Watch
Joe Biden Versus We the People
by Josh Hammer