Many observers are questioning the mental health of Vladimir Putin, including here at this publication, and for very good reason. After all, what kind of leader engages in such brute activity toward the people of a neighboring country who have done nothing to earn his savage rage?

Yes, what sort of man?

It is high time that I publicly share in print a story about Putin that I’ve shared with my students for several years now, since it was first told to me. I’m publishing it here for the first time.

Vladimir Putin has an assortment of hounds. Think “Hound of the Baskervilles” sort of hounds. Among them are some of the meanest, nastiest mongrels you’ve ever seen. These aren’t cuddly lapdogs or yipping dachshunds or happy little puppies with names like “Checkers.” No, these are ferocious attack dogs.

In behavior strange even by Russian macho standards, Putin seems to maintain these creatures as extensions of his manliness, and he measures unmanliness by those intimidated by his beasts. He has applied this beastly standard to several world leaders, including one of our own, President Barack Obama.

I first heard of this Putin–dog thing from a former student who went on to run a very successful international consulting firm, and whom I must leave nameless for reasons that will be obvious. I’ll call him “John.”

John has high-level security clearance. He has done close advisory work with the National Security Council and has personally spoken with presidents dozens of times. He advises foreign governments. He has met prime ministers of Britain, India, the German chancellor, and others.

One day in the summer of 2014, John went to Moscow for meetings with top Russian officials in the Kremlin. (He speaks Russian fluently.) John was in a meeting with three other Americans and six or seven Russians. One of these Russians John had met in Washington several weeks prior. John was bewildered that this particular Russian had made a big deal about President Barack Obama’s dog, Bo, a friendly, playful creature that the Russian dismissed contemptuously as a wimpy and unmanly dog. He intimated that this made Obama wimpy and unmanly. He asked John repeatedly, incredulously why this president would have such a weak and unimpressive dog. John said he really didn’t know, didn’t think it was a big deal, and tried to move on. 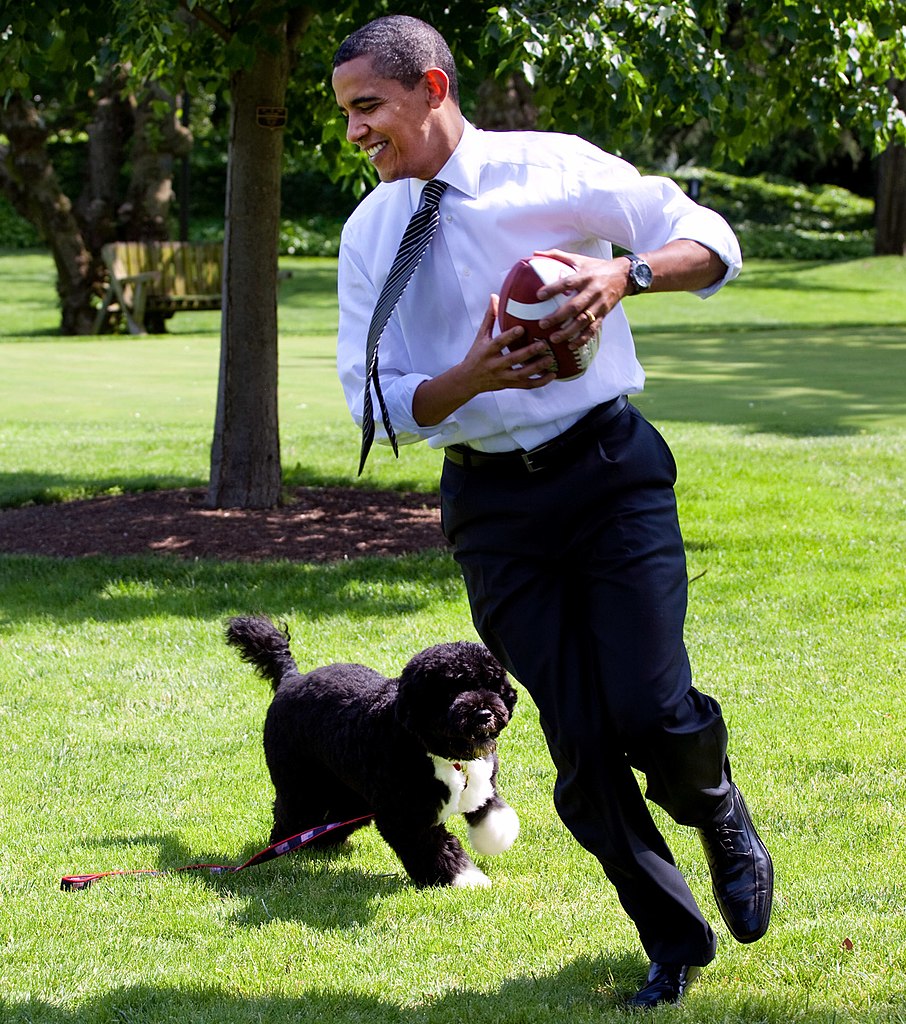 President Barack Obama and Bo on the South Lawn of the White House, May 12, 2009 (Pete Souza/Wikimedia Commons)

Circle back to the summer meeting in Moscow, at the Kremlin. As the group convened around the table, John was taken aback at the sight of none other than Vladimir Putin himself suddenly darkening the room. The brooding Russian strongman strolled in. This was totally unexpected. Sure, John had advised Russians, but had never met their authoritarian-in-chief. Putin walked up to John, and the Americans and said to them in his expressionless voice, “Come with me, I want to show you something.” John didn’t need to wait for the translation. He told his colleagues, “Let’s go. He wants to show us something.”

In total silence, Putin led the Americans through some corridors and down various sets of stairs into the literal basement of the Kremlin, a place where bad things had happened over the years, as John, a student of Russian history, knew well. There, the grimacing Putin showed them roughly 10 of the fiercest-looking canines that John had ever seen. There were restrained in large cages. Putin then looked at the Americans and said simply and sternly, “This is what a real dog looks like. Tell your president.”

Putin then left. That was the only thing he said to them and wanted to show them. He left the Americans there with an aide, who then brought them back to the meeting room.

John told me it was one of the weirdest things he had ever experienced. “It was utterly surreal,” he told me. “It was also very Russian.”

It was indeed. There was a lot of meaning in this — about Russians, about Putin, and about Putin’s views of his lesser adversaries.

I immediately shared the anecdote with the late, wonderful Herb Meyer, a good friend who was a high-level official in the CIA during the Reagan years and an astute foreign-policy analyst and Putin watcher. His colorful assessment is worth quoting: “We used to have psychiatrists at the CIA and everyone — including me — made fun of them from time to time. It was irresistible. But they were there for a serious purpose. It’s important to know if your adversary is a bastard, or a crazy bastard. There’s a difference.”

He then stated, “I’ve thought for some time that Putin was becoming, um, untethered from reality. This story provides some evidence to support that view. Obviously, a crazy bastard is more dangerous … so this is very worrisome.”

It is indeed. Has Vladimir Putin worrisomely become a dangerous crazy bastard?

We’re getting our answer in Ukraine right now.

For the record, there is precedent for Putin’s mad-dog behavior. Readers right now might have a vague recollection of a similar story involving Putin. Correct? Remember? It involved German Chancellor Angela Merkel.

“I understand why he has to do this,” said Angela Merkel in 2007, referring to Vladimir Putin, “to prove he’s a man. He’s afraid of his own weakness. Russia has nothing, no successful politics or economy. All they have is this.”

Wow. Now there’s a statement. What could have possibly prompted such a harsh, bitter assessment by one major world leader against another?

In more than one of their meetings, Vladimir Putin brought in his dogs to saunter and sniff at Merkel, who is terribly afraid of dogs, and Putin knows it. One incident in Sochi in 2007 was recalled in a profile of Merkel in the New Yorker. In this case, the dog was reportedly Putin’s black lab, Koni. 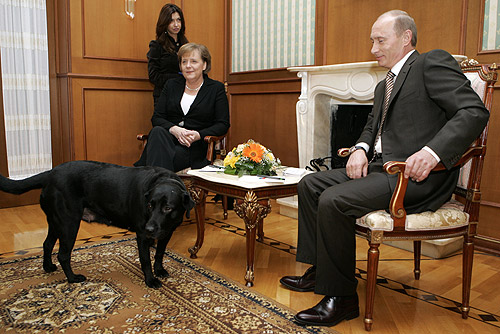 That was in 2007. My friend John’s episode was in 2014. Putin’s behavior has only worsened since.

To be sure, Putin and the Russian people generally are known for their appeals to manliness. It isn’t just Putin. It’s a Russian thing. Bill Clark, who was Ronald Reagan’s national security adviser and the most crucial player in Reagan’s effort to take down the Soviet Union, frequently locking horns with the Russkies, used to sum up Russian behavior for me by simply saying, “That’s Russian, Paul. That’s Russian.” I’m Clark’s biographer, meaning we had many such conversations over the years. I would send him the latest photo of a rifle-bearing, shirtless Putin slaying a rhinoceros, to the great satisfaction of the Russian people. “Bill,” I would ask Clark, “how do you explain this?” His answer: “That’s Russian, Paul. That’s Russian.”

But even by Russian standards, this Putin–dog thing is strange. Sure, it’s comical. But it’s also a little crazy. It seems very revealing of the man’s psyche, his psychology, his behavior, how he acts toward his own people, toward dissenters, and toward neighboring countries and their leaders. It is, indeed, worrisome. It seems a metaphor for Putin’s Russia, which seems to have literally gone to the dogs, courtesy of its mad dog of a leader.

Paul Kengor
Follow Their Stories:
View More
Paul Kengor is professor of political science at Grove City College in Grove City, Pa., and senior academic fellow at the Center for Vision & Values. Dr. Kengor is author of over a dozen books, including A Pope and a President: John Paul II, Ronald Reagan, and the Extraordinary Untold Story of the 20th Century, The Politically Incorrect Guide to Communism, and Dupes: How America’s Adversaries Have Manipulated Progressives for a Century.
Most Popular
1
Hither and Yon
POTATUS Speaks, A Nation Groans
by Scott McKay