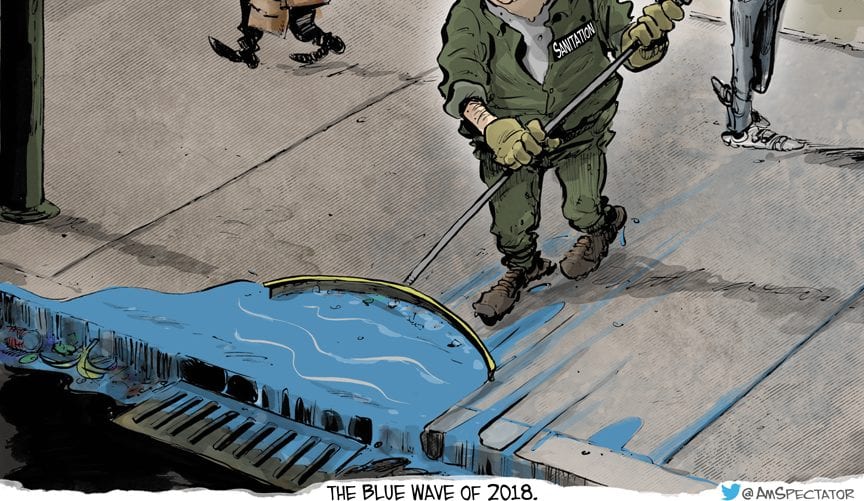 Grandma Pelosi gets the gavel and the subpoena power and that’s enough for Democrats. A friend asked me if the Dems’ slim House margin will force them to cooperate with the President. To which I ask: Have you met these people?  Democrats have been setting things on fire, kicking their political enemies, and beating up anyone wearing red these days. No, they will not be mollified by torturing Trump but not impeaching him. They won’t be content to “work together.” They want blood. This election won’t give them enough of it. It does give them some semblance of a win and that’s enough to give Democrats hope that the GOP destruction is possible, if not eminent. Pelosi is a wily old lady, but she’ll be facing a more conservative Republican minority, less likely to sell out to the Democrats. Welcome to a cage match. The Democrats need this violence to sate them.

Meanwhile, Senate politics just shifted bigly (or is it big league?). Lindsey Graham, still outraged about the Democrats’ vile behavior, promised more judicial appointments. He was spiking the football all over Twitter last night. An unleashed Graham is a sight to behold. I’m still getting used to it. Senator McConnell will have the power that Harry Reid once had. How will he use it?

The interesting thing about the 2018 midterms: The nuanced voting. There’s plenty of evidence that America is a stupid place, but the voting Tuesday seems to contradict that belief. The voters picked through their choices in ways subtle and dramatic. Subtly, they told Ted Cruz that he wasn’t as well-liked as Governor Greg Abbott and to tread carefully. Dramatically, they repudiated Senators McCaskill, Donnelly, and Heitkamp who participated in the egregious Senate spectacle to thwart Judge Kavanaugh’s ascension to the Supreme Court.

In Florida, ex-cons won back their voting rights, but Gillum lost. Voters threaded their votes through ballot initiatives on things like medical and recreational marijuana. Voters split tickets for their House and Senate races.

A friend posited that this election may be first true internet election — that voters read up on various people and made their choices based on that.

A side note about Texas.

Is it in danger of going Purple, then Blue? On the state level, Democrats picked up seats in the Texas House and Senate. In addition, Harris County, once divided, voted the most effective Republican judge Harris County has had, Ed Emmett, out of office. Emmett shepherded Houston through multiple storm recovery efforts. Now, Harris County is 100% in Democrat hands. The cities are getting more Democrat. Ted Cruz lost ground in Bush country. For now Texas is still a one party state divided between liberal Bushies and the legacy of Rick Perry, but the Bush Republicans prefer, like the national establishment Republicans, more liberal policy. So, Texas has the potential to move further left with each election. It will take concerted effort to keep the state Republican. The Democrats are playing a long game and planting the seeds of possibility and belief. It will be a while before their work pays off but the state is moving purple. It won’t be long before an unliked Republican can’t get elected in Texas. They’ll have to be better.

The Republicans won by not losing as badly as expected and picking up seats in the Senate. The Democrats won by winning the House. Who lost, then? The media. Also, Barack Obama.

No one is paying attention to the media. If Hollywood celebrities and the political commentariat had the influence they like to believe they wield, Beto O’Rourke wouldn’t just be Senator, he’d be the Obamaesque heir apparent and future President. That didn’t happen. All the lavish praise and time and attention, that should be considered an in-kind donation, should have helped O’Rourke during a midterm featuring an unpopular president of the opposite party. That didn’t happen. The huge wave that the media pushed and hoped for didn’t happen. The media has so devalued themselves that people no longer trust them, even as they watch them for entertainment.

Now, had a scintilla of that attention moved to John James in Michigan maybe James could have won. People would have known who he was. The media ignored him — and he was a legit phenom. But he was a Republican…

Meanwhile, the phenom Barack Obama, who found it impossible to put a sock in it these last two years and answered the siren call of campaigning managed to help each Democrat he stumped for lose. He was absolutely toxic, again, to Democrats. No one will tell that story because it’s a painful story. Also notably absent: Hillary and Bill Clinton. One would think after two years of caterwauling about the persisting Hillary, that Democrat candidates would want to galvanize their heartbroken voters with an exciting speech from the living herstory. Alas, not as much as one would think.

These miserable Democrats, and Nancy Pelosi is one of them, are divisive and inspire animus. Not all Democrats do that for moderate voters, but the Democrat party has moved so far Left because they can’t win elections without being spiteful and rabid. This puts Dems in a bit of a quandary going forward. Work with the President and be reviled by their base. Hate on the President and be reviled by the country.

The voters put House members of both parties in a straitjacket. Who can blame them? The Republicans did nothing with their majority and so the voters are punishing them with Democrats who will find it impossible to do anything with the majority they just won. Voters rewarded the Senate for doing its job and so it has some freedom to do more.

It was an interesting election night — more nuanced and thoughtful. It will be difficult for either party to dismiss the messages sent to them because unlike a full stop or tsunami wave, the voters picked through the offerings and decided candidate by candidate and issue by issue what they wanted.

They didn’t want the Democrats to run everything. There was no Blue Wave. The voters have a gridlocked government and that’s not such a bad thing.