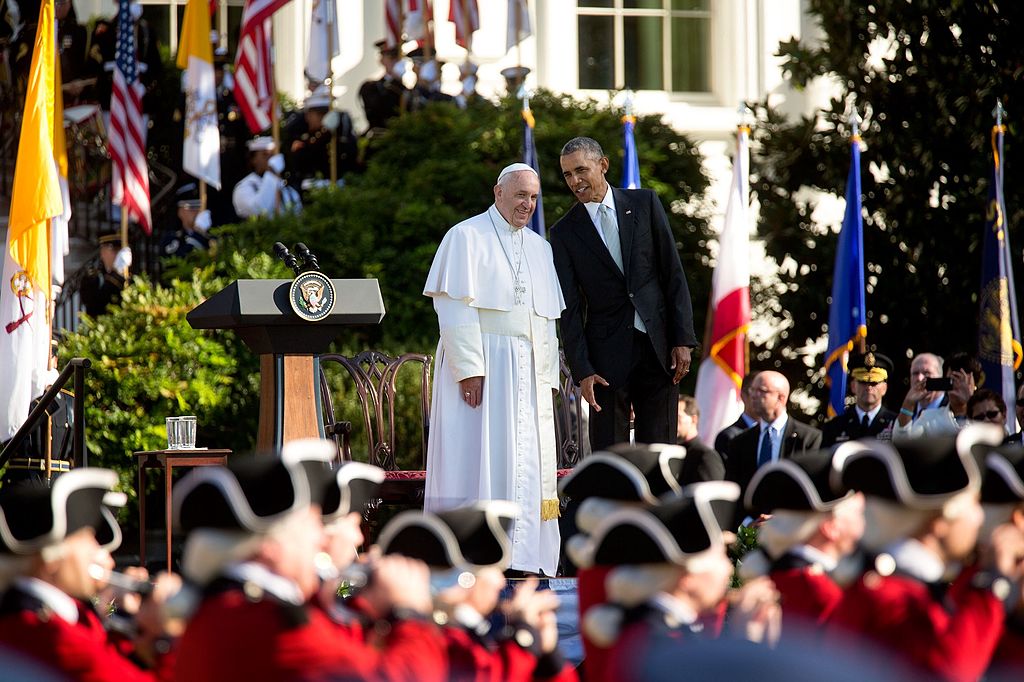 As the party of secularism, the Democrats pride themselves on keeping “religion out of politics.” But they don’t mind if liberal politics seeps into religion. Nor do they mind taking direction from politicized religious figures. Recall the pope’s visit to Congress during the Obama–Biden administration. The Democrats were all ears, as Pope Francis delivered an address touting their favorite left-wing causes, from open borders to climate-change activism.

John F. Kennedy had promised not to let a pope influence his politics. But today’s Catholic Democrats make no such vows. Indeed, Joe Biden has reversed JFK’s pledge, as he brags about his political alliance with Pope Francis. In the closing days before the election, Biden has been courting the Catholic vote by aligning himself with the pope’s political musings, quoting from his encyclicals, and playing up their friendship.

Where Kennedy said that the pope did “not speak” for him on political matters, Biden loudly invokes Francis in his politics. This, of course, points up an enormous and maddening irony: the same Joe Biden who throughout his career has said that he will not “impose” his faith on non-Catholics is happy to dump the pope’s personal politics on them.

Many such twisted and bewildering ironies would define his administration if he wins the presidency. He would at once preside over the most anti-Catholic presidency in American history — renewing the Obama-era harassment of the Little Sisters of the Poor and expelling Catholics from public life — while forming a globalist juggernaut with the pope on non-religious matters.

Biden takes his politics from the pope and his religion from the political zeitgeist. It all makes, should it happen, for a very combustible presidency. That it could come not against but with the Catholic vote and the support of the hierarchy only adds to the farce.

In Archbishop Carlo Maria Viganò’s latest letter to President Trump, he warns in effect of a Biden–Bergoglio reset in global politics:

A global plan called the Great Reset is underway. Its architect is a global élite that wants to subdue all of humanity, imposing coercive measures with which to drastically limit individual freedoms and those of entire populations. In several nations this plan has already been approved and financed; in others it is still in an early stage. Behind the world leaders who are the accomplices and executors of this infernal project, there are unscrupulous characters who finance the World Economic Forum and Event 201, promoting their agenda.

Whatever form this reset takes, if it happens, Biden and Bergoglio (Pope Francis’s birth surname) can be counted on to join forces to promote it. What binds them together is not Catholicism but leftism. Both are products of a hopelessly politicized era in the history of the Church, in which a generation of faithless bishops gave rise to a generation of faithless pols. A Biden–Bergoglio partnership would seal that unholy alliance, causing both the Church and the world to spiral downward.

Just as the Church bred a destroyer in Barack Obama — the devious Chicago Cardinal Joseph Bernardin paid for part of his training as an Alinskyite community organizer — so she bred an even worse one in Joe Biden, whose persecution of Catholics would pick up where Obama left off and intensify. A Biden presidency would obliterate the religious freedom of Catholics, driving them into the narrowest of sectarian shadows. Anyone who doubts this need only look at whom Biden chose as his running mate: Kamala Harris, an anti-Catholic bigot so extreme that she considers mere membership in the Knights of Columbus a disqualification for government service.

Under the coercive edicts and decrees of the Biden administration, the Church in America would face a future either of secularist hijacking or ostracism and oblivion. All of the destructive currents within the Church would accelerate. The Left’s goal is to remove faith from politics while politics swallows up the faith.

In the alliance between faithless bishops and faithless pols lies a mutual mission to secularize the Church. What explains the deafening silence (and sometimes overt support) from the bishops about Biden is not just that they share his politics. They also share his dissenting theology. They, too, would like to see Church teaching dissolve. Having already surrendered most of their institutions to secularism — just look at Catholic academia, which is almost indistinguishable from its secular counterparts — they don’t mind if Biden finishes them off for them. Like Obama, Biden can even expect to receive honorary doctorates from Catholic colleges while doing so.

In Pope Francis’s visit to America, one can already see the pitiful character of that depleted faith. He came and conformed almost perfectly to his host’s secularist expectations. In his speeches before Obama and Biden, he said nothing about their anti-Catholic policies and instead bolstered their politics. Progressives noted with glee that the only example he gave of an attack on life was not abortion but the death penalty, while conservatives sadly noted his omissions of any mention of Jesus Christ. Religion barely figured into his visit. It was the consummation of a Democratic dream: not religion in politics, but politics stuffed so thoroughly into religion it became nothing more than useful propaganda.

In Biden and Pope Francis, the very alliance JFK promised to prevent may come to pass, ironically enough, but with a perverse twist — a Catholic president and pope united against America in all things except religion.