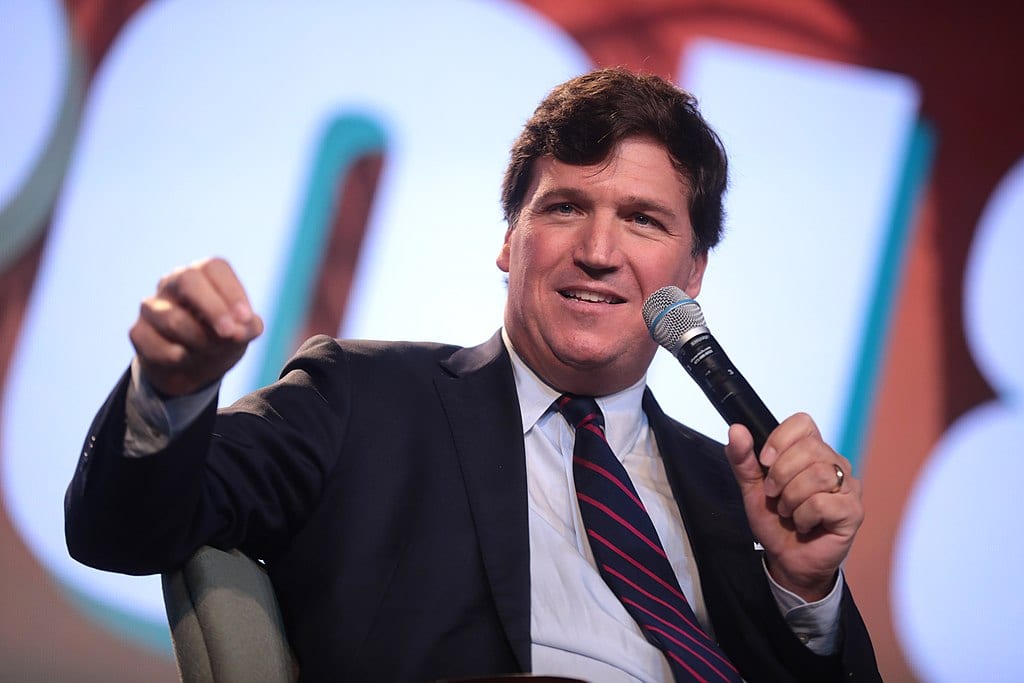 The anti-free press Media Matters for America (or as I called them a while back in this space, the Media Matters Fascists) — they the far left wing group that has been repeatedly flagged for its anti-Semitism (as here and here) is out there again targeting another conservative media host. This time — again — it is Tucker Carlson.

It seems that back in the stone age of the early 21st century Tucker said blah-blah-blah on some radio “shock jock” show and so, of course, all these years later — off with his head.

We have written about this Media Matters game before. They are used as the tip of the spear in the arsenal of the Leftist State Media, the latter’s objective being to bring back their onetime monopoly on the news and just how and who gets to present it or discuss it. Tucker — in this case — stands in the way. So the idea is to get him. More of which in a moment.

Recall that back in 2012 the founder of Media Matters, David Brock, wrote an entire book about his obsession with destroying Fox News. Titled The Fox Effect: How Roger Ailes Turned a Network Into a Propaganda Machine. Aside from pushing anti-Semitism, publishing articles on “Israel Firsters” — now they are all about defending the anti-Semitic Democratic Congresswoman Ilhan Omar — the Media Matters Fascists are determined to shut down any and every conservative host on television or radio.

I have written several times over the years about their campaigns to get Rush Limbaugh or Lou Dobbs or Glenn Beck or Sean Hannity or Laura Ingraham or Tucker Carlson (and who knows who else) off the air. Oh yes, eventually I annoyed them enough that they came after me, too. CNN, shamelessly, caved.

There was this DC story — bylined by…Tucker Carlson (with Vince Coglianese) that headlined:

This story reported, in part, of founder Brock:

“He had more security than a Third World dictator,” one employee said, explaining that Brock’s bodyguards would rarely leave his side, even accompanying him to his home in an affluent Washington neighborhood each night where they “stood post” to protect him. “What movement leader has a detail?” asked someone who saw it.

Extensive interviews with a number of Brock’s current and former colleagues at Media Matters, as well as with leaders from across the spectrum of Democratic politics, reveal an organization roiled by its leader’s volatile and erratic behavior and struggles with mental illness, and an office where Brock’s executive assistant carried a handgun to public events in order to defend his boss from unseen threats.”

Then there was the aforementioned story of the group’s anti-Semitic problem headlined:

A top executive at Media Matters for America and the principal activist in the “Stop Rush” campaign made racist and anti-Semitic comments and disparaged “trannies” on a dormant blog that he wrote just several years prior to his prominent liberal activism career.

Blog entries reviewed by The Daily Caller show that Angelo Carusone made derogatory remarks about ethnic groups and used language to insult “trannies” and ugly “gays” that would be considered hate speech by his own organization.

Carusone is the executive vice president of the George Soros-funded progressive advocacy group Media Matters for America, headed by David Brock, which has built a nonprofit cottage industry out of targeting conservatives in media and flagging their politically incorrect statements for coverage by mainstream media outlets. Carusone is identified by insiders as the lead organizer of the pressure campaign to intimidate radio host Rush Limbaugh’s advertisers, which accuses Limbaugh of bigotry.

Then there was this headline in the DC that emerged in 2017.

BROCKBUSTER: IS THE MEDIA MATTERS CHIEF SLURPING FROM A SLUSH FUND?

Media Matters chief David Brock has personally watched over and benefited from a scheme to hide donor identities that allowed progressives to funnel untraceable millions to initiatives against conservative and GOP causes around the nation, a complaint filed Tuesday with the Federal Election Commission charges.

One could go on. And on.

But the central fact is that it is past time for people across the media spectrum to stand up for free speech, a free press and oppose these anti-free press jihads that Media Matters and others in the Leftist State Media repeatedly mount from some troubled headquarters in a drive to intimidate or destroy outright both Fox News and any and all conservative hosts on television or radio.

Last year when the target was Laura Ingraham, I wrote this column titled:

An Open Letter to Conservatives on Laura Ingraham

Today quite literally the only thing needed is to substitute Tucker Carlson for Laura Ingraham. The point stands. I wrote in part:

By now it should be crystal clear to every conservative — no matter whether they are Pro-Trump, Never Trump, pro-this or anti-that — what is happening in America. Any conservative on television or radio or in fact with any audience of any kind, as in a speech invite to a college campus — is now a target for silencing.…

Conservatives? If I may direct this question to conservatives everywhere, famous and unknown, isn’t it time to do something here? The hard fact is this kind of what Ben Shapiro accurately calls “fascism” will continue until conservatives collectively rally and say: Enough!

So. Let me say it again. This time — once more — the target is Tucker Carlson

It is time. More than past time, for conservatives to stand up and say: Enough!