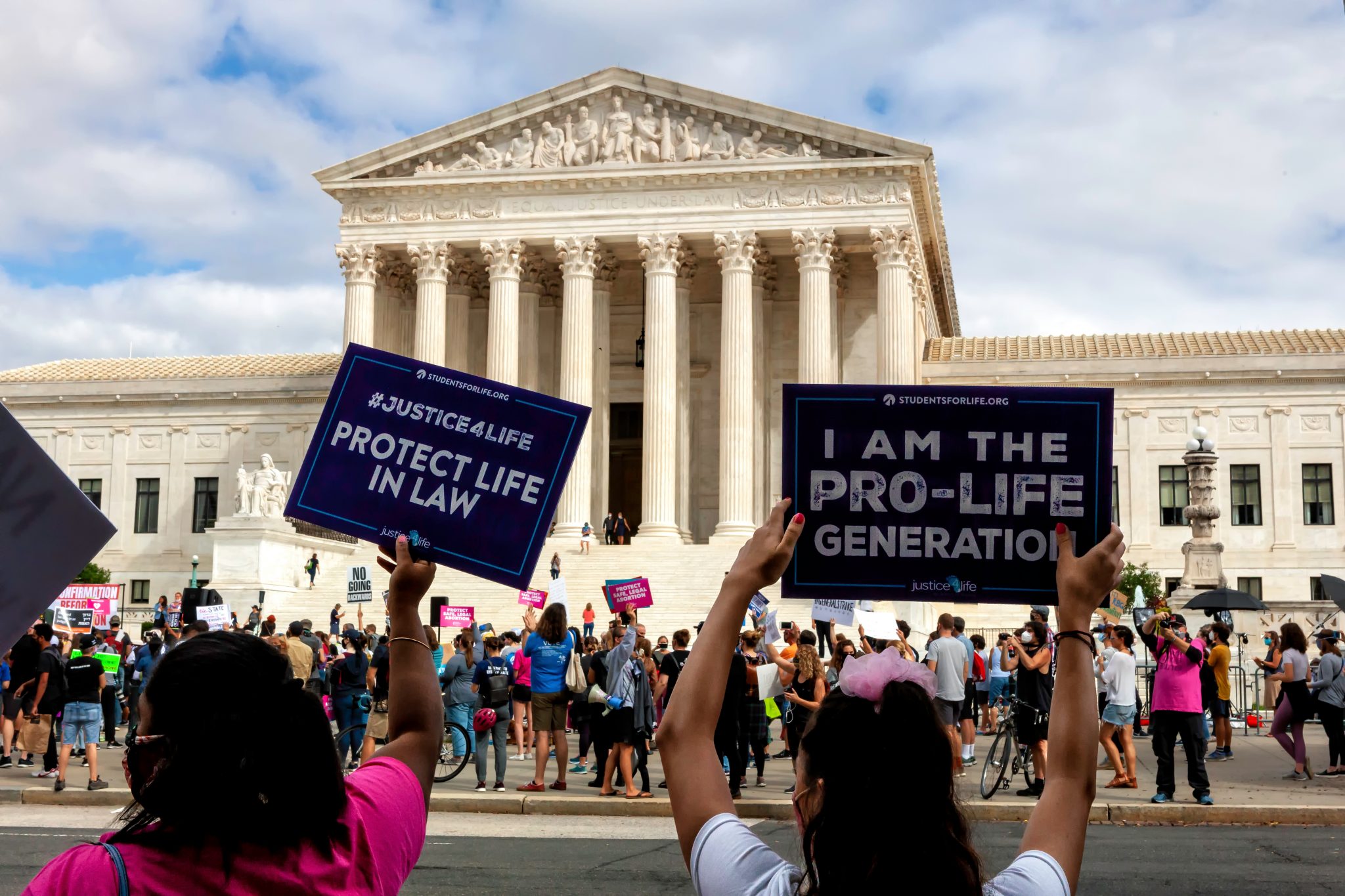 The pillars of legal wokedom are shaking. The Supreme Court agreed to hear a Mississippi case in which the Legislature banned abortion after 15 weeks of pregnancy. Legal commentators, especially on the left, are asking if this is “the” case that tosses Roe v. Wade. Pro-abortion activists are trying to revive efforts to pack the court with judges determined to rule the world.

The Court handed down Roe nearly a half century ago, on January 22, 1973. The majority included nominal conservative Chief Justice Warren Burger, a Nixon appointee. The justices discovered a never-before-noticed constitutional right to abortion in the 14th Amendment, which was ratified by state legislatures that had banned abortion. What Alexander Hamilton called “the least dangerous branch” obviously had strengthened substantially as the Court overturned the laws of every state. Indeed, the jurists imposed one of the most lax, even radical, abortion regimes in the world.

Liberals celebrated. In their view, the judiciary was a bulwark against majoritarianism and protected individual liberty. They bridled when right-leaning critics proposed impeaching justices or restricting the high court’s jurisdiction. How dare the Right threaten hallowed judicial independence as decreed by the Founders.

But that was then; this is now. Today the Left espouses unbridled majoritarianism, uninhibited by retrograde Neanderthals in black robes. Let the people rule!

The flaws of Roe originally were obvious even to supporters of abortion. The basic problem was simple: the opinion did not involve constitutional law. The majority opinion used legal language but lacked legal reasoning, basing its ruling on extensions of cases that cited recently imagined constitutional exhalations, penumbras, vapors, emanations, and effusions. The majority opinion reads like a statute, with separate rules for abortions in different trimesters of pregnancy and all manner of detail unrelated to the Constitution.

Indeed, Justice Harry Blackmun began his opinion with this comment:

We forthwith acknowledge our awareness of the sensitive and emotional nature of the abortion controversy, of the vigorous opposing views, even among physicians, and of the deep and seemingly absolute convictions that the subject inspires. One’s philosophy, one’s experiences, one’s exposure to the raw edges of human existence, one’s religious training, one’s attitudes toward life and family and their values, and the moral standards one establishes and seeks to observe, are all likely to influence and to color one’s thinking and conclusions about abortion. In addition, population growth, pollution, poverty, and racial overtones tend to complicate and not to simplify the problem.

These sentiments are interesting, perhaps, but have nothing to do with the basic constitutional question: whether or not the nation’s governing legal document bars restrictions on abortion. But Blackmun ranged even further, taking a detour through history to cover treatment of the procedure by the Persian and Roman empires, as well as ancient Greece. What this had to do with American constitutional law he left unexplained.

Notably, if Roe is overturned, that would neither impose a federal prohibition nor reinstate the long-discarded state laws.

At the time even many liberals criticized Roe as excessive judicial overreach. My constitutional law professor, speaking some four years after the decision, said he liked the result but couldn’t justify the legal opinion. In a famous article entitled “The Wages of Crying Wolf,” John Hart Ely of Yale Law School, who later became dean of Stanford Law School, said the Court’s reasoning was “simply not adequate,” the decision was “very bad,” and the case was a “dangerous precedent.”

Ely was no right-wing pro-lifer. He told his readers, “Were I a legislator I would vote for a statute very much like the one the Court ends up drafting.” But he concluded that “Roe lacks even colorable support in the constitutional text, history, or any other appropriate source of constitutional doctrine.” He strengthened and reiterated the point in his conclusion: “It is bad because it is bad constitutional law, or rather because it is not constitutional law and gives almost no sense of an obligation to try to be.” This meant, as pro-lifers have argued for 48-plus years, that Roe was judicial make-believe, legal fantasy, constitutional nothingness.

When Ely wrote his article in 1973, which seems like a lifetime ago, modern liberals enthusiastically called themselves liberals. And most of them really were liberals in the sense of acknowledging the legitimacy of opposing arguments, rather than demonizing critics like Ely and revving up the Cancel Machine. Fans of the liberal Warren Court, which tore up precedents on cases ranging from racial segregation to social welfare to religious practice, had not yet decided that courts should never reconsider precedent. There were many pro-life Democrats in Congress as well as state legislatures. Ideological commitments and abortion positions were not strictly aligned: Stanford’s pro-life group, which I organized, included a socialist-atheist.

Yet discussing Roe as a legal decision ignores its most tragic real-world impact. What made Ely’s critique so devastating is that he understood and respected the opposing argument. In particular, he cited the countervailing interest that the Supreme Court brushed aside: “there is more than simple societal revulsion to support legislation restricting abortion: Abortion ends (or if it makes a difference, prevents) the life of a human being other than the one making the choice.”

Although little concern is expressed about the unborn, today congressional liberals, er, progressives, routinely round up children to justify any number of grand new social programs. There just is no interest in ensuring that babies actually live to take advantage of all the promised benefits. One minute after birth, there is a child requiring a village and much more — the federal government with manifold new social programs and an open Treasury door. But one minute before birth the putative child is an inconvenience to be eliminated on demand.

In fact, pregnancy is a major burden and biology is unfair, placing developing life within women. Having the government intervene in personal decisions is never good, and interfering with choices regarding childbearing should always be a last resort. But abortion is not simply a liberty issue because, as Ely noted, there is another life at stake. Government routinely intervenes to protect children from abuse; death is the greatest abuse possible.

Forcing a pregnancy to continue is a huge imposition. In all but the case of rape, however, pregnancy is a result of choice even if not intention. Babies do not result from magic. They occur as a consequence of sex, which people choose to have. So the right question is: shouldn’t bringing a child into being trigger at least some obligation toward that life, such as carrying him or her to term? That is, “choice,” the decision to have sex, which results in a child, is already protected. Abortion, in contrast, is not choice, but rather a flight from responsibility for a voluntary decision previously made.

Whatever one thinks of that issue, it was not the justices’ prerogative to decide whether or not they favored abortion. Rather, the legal question was the one that Ely discussed when some liberals, at least, still believed that the Constitution should mean something. There was a serious tradeoff to be made, and the officials authorized to make it were legislators rather than judges. Indeed, in response to progressives’ fears that Roe might be overturned, President Joe Biden said that he favored enacting that decision’s standards into law. Press Secretary Jen Psaki explained, “the president is committed to codifying Roe regardless of the … outcome of this case.” In 2019, New York state did the same, with the Legislature passing the bill on the 46th anniversary of the decision. This is sort of debate that the Founders expected.

Notably, if Roe is overturned — it already has been modified over the years — that would neither impose a federal prohibition, even though some pro-lifers advocate that result, nor reinstate the long-discarded state laws. The issue would simply go back to the states for their decision. A recent New York Times analysis concluded that “In more than half of states … legal abortion access would be unchanged.” People in most other states would be just one state away from legal abortion; in the deep South it would be two states for some. Thus, while access to abortion would be more limited than today, it would remain available. For the ideological Left Roe is more about symbolism than substance.

Moving the debate back to states would have two beneficial impacts beyond tying constitutional interpretation to the Constitution. The first would be to transform the debate by re-enfranchising those who found that the courts had snatched one of the most important issues out of their hands despite the Constitution’s intentions. Much of the ferocity of the abortion debate reflects outrage that seven justices arrogantly substituted their judgment for everyone else’s.

The second advantage would be to push pro-lifers who long have focused on court battles and judicial appointments back into the political process, where they belong. They would again have to make their case against abortion rather than focus on legal process. They would need to address a new, younger generation rather than refight half-century old battles. And, instead of imagining new court fights, they would have to develop new institutions and programs to address the social challenge created by additional women carrying their babies to term, often unwillingly. Support for single parents and adoption would become even more important.

The Trump administration’s careful attention to judicial appointments sparked an increasingly active left-wing push to pack the courts or take other action to regain control of the judiciary. Activists loudly insist that the ability of judges to thwart the popular will must be curbed. Yet with Roe under threat from judges who would return the issue of abortion to the democratic process, progressives are rallying to defend perhaps the definitive case of a judicial majority imposing its collective opinion on the rest of the country, popular will and political process be damned. But what does consistency have to do with politics?

A half-century is time enough for the Roe error to persist. The Supreme Court should overturn one of the most egregious judicial abuses in American history. Then the issue would return to the people in the messy process known as politics. The famed German Chancellor Otto von Bismarck warned us about watching our laws or sausages being made. How true. Still, making our own political meals would be better than having the courts continue to force-feed us their legal sausages.

Doug Bandow is a Senior Fellow at the Cato Institute. A former Special Assistant to President Ronald Reagan, he is author of The Politics of Plunder: Misgovernment in Washington. A graduate of Stanford Law School, he is a member of the California and Washington, D.C. bars.