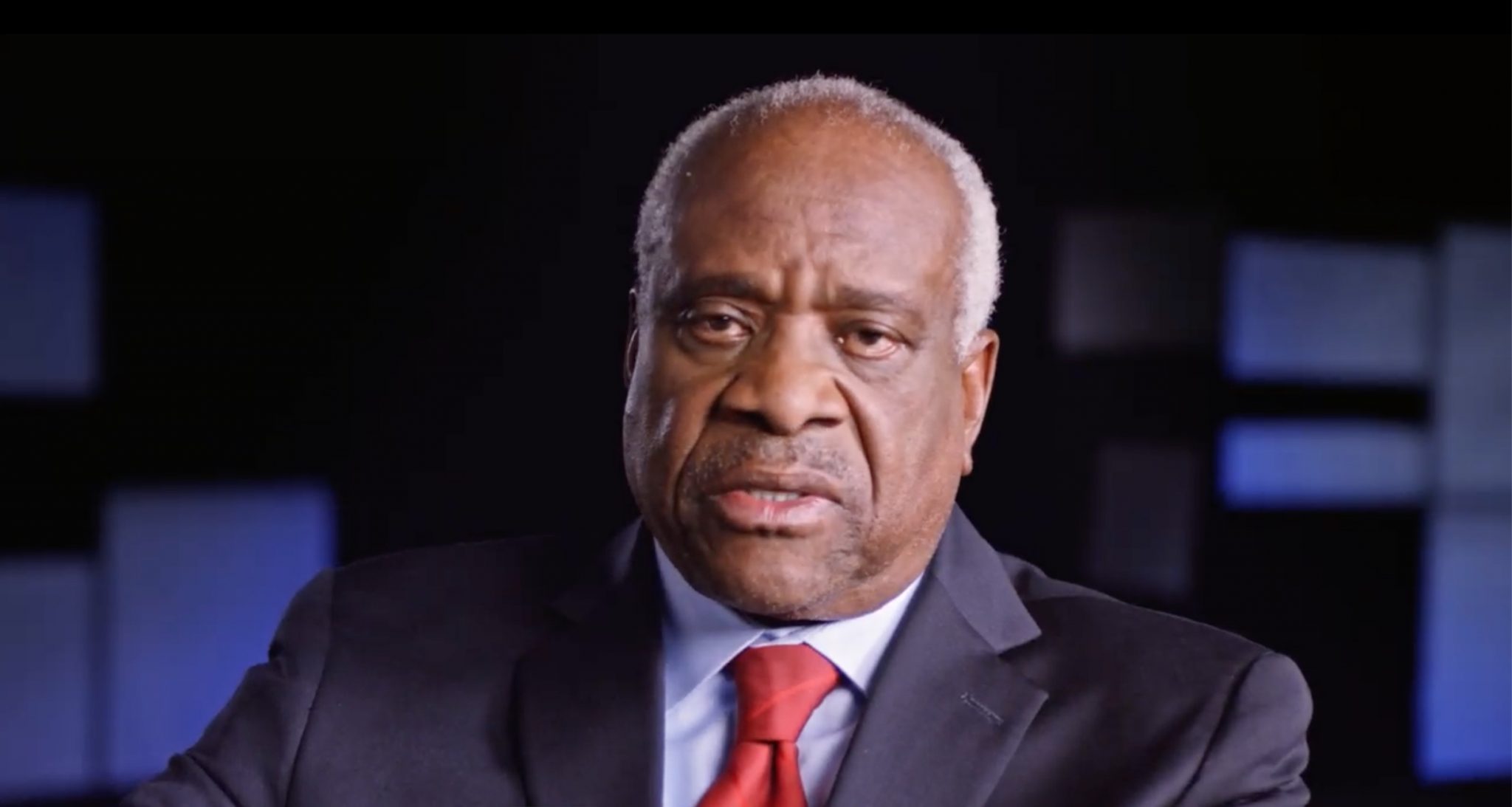 A few months ago, I wrote an article on Michael Pack’s Created Equal, a film about the life of Supreme Court Justice Clarence Thomas. The film depends on a trove of conversations with the great jurist, unprecedented in their breadth and personal candor. It gets its shape and form and its striking power, all the more affecting for being utterly free of editorial commentary, by Mr. Pack’s subtle, reserved documentary manner. Pack judiciously chooses footage from the archives and edits it, along with shots of the places of Thomas’s life, into a seamless narrative that follows the subject’s own calm, yet passionate, recollections of the important moments of his times.

When I saw the preview screening, I knew this was an important film as well as deeply emotional one. Little could I imagine how essential it would become within weeks, as a crisis involving our international, economic, and health security would take over our national affairs. Such a crisis is ultimately existential: which is to say, constitutional. No time as ours could be more urgent for a beautifully wrought story on film about a man who is not only an embodiment of what our Constitution means and offers, but also is one of the most profound thinkers on the meaning of America.

The ghastly episode that Thomas himself called a high-tech lynching was engineered by liberal Democrats, including the party’s presumed, basement-dwelling presidential nominee.

Clarence Thomas, born in 1948 and approaching his 30th year on the Supreme Court (the most among current members) has a reputation for taciturnity, but he speaks comfortably in Mr. Pack’s film, reminiscing with warmth, and with occasional sadness, about his childhood and his formative years. These, in a sense, have continued all his life, for he never has stopped observing American life through the lens of its foundational ideas, liberty and equality. Thinking always about how our Republic has evolved over nearly two and a half centuries and how the law has adapted this evolution to the foundational principles of the Republic has been the Justice’s life’s work.

It is a life of permanent education, of constant reminders to return to the basics that make us human in our special way — American humans. Thomas speaks personally as well as philosophically of the challenges to American uniqueness, which he has faced throughout his life. His tone, ordinarily serene and with a tinge of humor, also flashes signs of disappointment and outrage. The extreme poverty into which he was born in Georgia was made more painful by the anti-constitutional obstacles that enforced the limitations on the opportunities of American citizenship that came with segregation. In his work and life, however, Clarence Thomas has seen, and continues to see, that the obstacles that he knew growing up have been replaced by others no less insidious for claiming to be instruments of progress created and enforced by intrusive and regulatory government.

Michael Pack’s film captures the continuity of Thomas as a quintessential native son. Cheated of the promise of equality, the future lawyer gravitated in college toward revolutionary black nationalism. A deep meditation on the first, electrifying sentence of the Declaration — a meditation that continues more than half a century later — convinced Thomas that separation from the American project must lead to a dead end. Bolstered by his law studies and the discovery of conservative thought, notably that of Thomas Sowell, he grew into the most fervent defender of the political and legal system of which the U.S. Constitution is the blueprint, as the best hope for the gradual and by necessity never-completed pursuit of the ideal of a republic founded on liberty and equality.

Ideas, and of course due processes of law, are inseparable from Clarence Thomas’s thinking, but he gives even more importance to character. After the destruction of his parents’ lives by the misery of Depression-era Savannah, his grandfather, Myers Anderson, took charge of Clarence and his brother. No scenes in the film are more stirring than Thomas’s evocation of the stern, scarcely literate, man who placed his faith in God and education and hard work and insisted on mental and moral strength, on courage and self-reliance, on truth. Mr. Pack shows us the modest but clean and well-maintained house from which Myers Anderson eventually built a decent living and in which he raised the boys — giving them the first indoor plumbing and bedrooms they had known — and sent them on to their careers.

Mr. Pack several times returns to a wide-angle shot, accompanied by a softly insistent blues guitar, of a skiff choosing a fork in a meandering river. It symbolizes what Myers Anderson taught his grandsons: you choose your way and then you stay true to it and follow it faithfully.

The film was shown on PBS this week and surely will be shown again and often for a long time to come. The preview screening I attended a few months ago was in an auditorium at the National Archives. The venue could not have been more apt, with all the nearby documents by which Justice Thomas lives and whose meaning and power he by his work keeps alive.

They are the documents that, to the senators who tried to destroy Clarence Thomas when he was nominated for a seat on the Supreme Court in 1991, are antiquated, meaningless, unworthy of study, obstacles to the brave new country they want the rest of us to accept (they have the means to stay out of it). They would not think of them as the handbook of the American nation, which Clarence Thomas knew them to be when he sat down alone and faced these senators, scared, obviously — they wanted his life — but resolute and ultimately fearless.

The ghastly episode that Thomas himself called a high-tech lynching was engineered by liberal Democrats, including the party’s presumed, basement-dwelling presidential nominee. They could not tolerate the idea of “the wrong black guy,” as Thomas put it ironically, getting a seat on the court that ultimately decides, again and again, whether the Constitution that made a Republic of Liberty will endure, or will be forgot, as they would rather.

This film will surely be a major reason why amnesia will not fall down upon us or our descendants; any school district that makes use of Created Equal in its curriculum will help ensure that young Americans will become human beings and citizens, the way Myers and Christine Anderson raised their grandson Clarence Thomas.