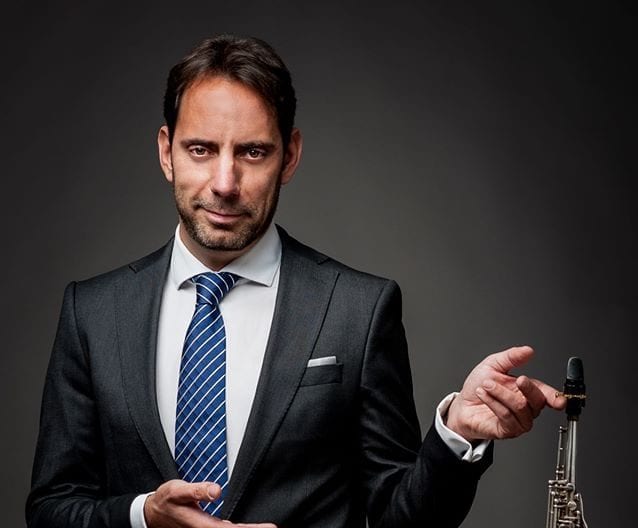 Consider the clarinet. What an oddball musical instrument! It is not the mighty piano, whose range is from the most sublime romanticism — “Für Elise” — to the most shrewd and brilliant jazz riff, as in Dave Brubeck’s “Blue Rondo à la Turk.” The endless range of jazz piano: Keith Jarrett, Köln Concert, Duke Ellington’s “Mood Indigo,” “Take the ‘A’ Train” — what more need I say? Oh, much, much more, there is so much more. And then you go to Bach — the Goldberg Variations! Played by Van Cliburn! Or somebody! Fantastic! Incomparable! Beyond compare!

Nor is the clarinet the trumpet. You never saw the greatest musician of the 20th century, Louis Armstrong, play the clarinet, did you? You saw — Artie Shaw! Benny Goodman! You saw — a few years into the next century — Bence Szepesi, you saw and heard, on the stage at American U.’s Katzen Center, a fine music place if not the Village Vanguard or Carnegie Hall either, which he had just come from. Remember the name, Bence Szepesi, and remember the music, if you can: the man can do it all.

If that is what it is. Looks kind of like a flute, if you ask me, or a stiff sax. The clarinet, in actual fact, was invented as a high-note-hitting horn — the specialists will correct me — that could swiftly devolve into the most breathtaking variations on whatever Schumann or Brahms or whoever — Szepesi played them both, and more — could dish out in their feverish compositions. You have to hand it to those classical and romantic composers; they were mental. Unlike the jazz men, who were cool, they were feverish mental cases, and laboring under terrible pressures in autocratic societies. Well, that was true of jazz men as well, in a sense, and Benny Goodman took a lot of heat for bringing colored musicians into his orchestra. Look at this way: he took them because they were the best. For the job. And the show must go on.

And it did. Accompanied by the marvelously gifted Yangmingtian Zhao on piano, the woodwind virtuoso demonstrated that little Hungary, once again, as Mr. Pleszczynski keeps telling me, punches — or in this case blows (don’t you say blow the horn?) — above its weight. The man’s range is breathtaking, and it was particularly evident in a difficult piece — who am I to say, but I understand this is the way music critics like Mr. Terry Teachout put it — like Rossini’s “Themes” — honestly, I do not know why music composers come up with crazy names like this or “Variations on this or that note” or what-all — I just know it sounded awfully hard to play because you had to go from ta-ta-ta-taaa, horn-like, to subtle stuff out of Miles Davis.

Okay, I admit, I do not know from classical, but Mr. Norman Podhoretz once said to me — he must have said this to many others as well — that J. S. Bach, whom he thinks was a Jew (makes an interesting argument for it, too) was the supreme expression of music art. Well, I like the Duke and I like Satchmo, and it’s a free country. Also Chuck Berry.

It is also why we should have men like Bence Szepesi and Yangmingtian Zhao, as well as Ádám György, whom we discussed in this space some time back, more often in Washington. Because face it: this city is a one-industry town, and it’s boring as all hell. I also am pleased to report that despite this ineluctable and unsurmountable fact — but if you can’t take the heat, go West — there are real live filmmakers here.

Yes, despite the gloom and the bitterness and the subversion of our great constitutional republic, there are guys out there who make movies. These are moving photographs what tell you a heartrending and inspirational story such as Mr. Michael Pack’s forthcoming Created Equal. Though billed as a documentary — which in truth it is — this is a human drama of the highest order, the story of how Clarence Thomas, the most righteous constitutionalist on the Supreme Court, came to be a man of such unflinching and profound character.

At two hours, Created Equal is long for a documentary about a public figure, but time flies. You are taken into the judge’s upbringing in rural Georgia in the time of Jim Crow and racial injustice. You come to understand, through a skillful — I would even say beautiful, but the clarinet is beautiful, film is … graphic — juxtaposition of images showing where Clarence Thomas came from and where he went, with what he thinks and what he knows today (at 70, and on track to be the doyen of the Supreme Court), that character beats culture.

Yes, because the culture Thomas grew up in was profoundly flawed, unjust. His grandfather Anderson, with whom he and his brother spent some formative years and who in most respects raised them — was illiterate, but he believed in doing the right thing and doing it as well as you could, no excuses. This is what came to define Clarence Thomas as a lawyer, a judge, a father, a husband, a man.

It is a fine film, it will move you no less than Bence Szepesi’s control of his horn or Yangmingtian Zhao’s control of his keyboard. You may or may not agree with Justice Thomas’ constitutional originalism, you will respect the man who argues for it.

And the beauty of it, to me, is that you can find works of art like these in this swamp. Washington is not a creative city, but it has got the means, the resources — thanks to the American taxpayer — to bring creative work to its denizens. A rotten deal, you may say, for the hapless taxpayer, and underappreciated by persons — of either sex — who think the sumum of literature is to write a memo on Ukraine policy (as if anyone cares about that place that the German general staff invented in 1917), but a great blessing for those who think art, art alone, gives us a window into God’s creation.