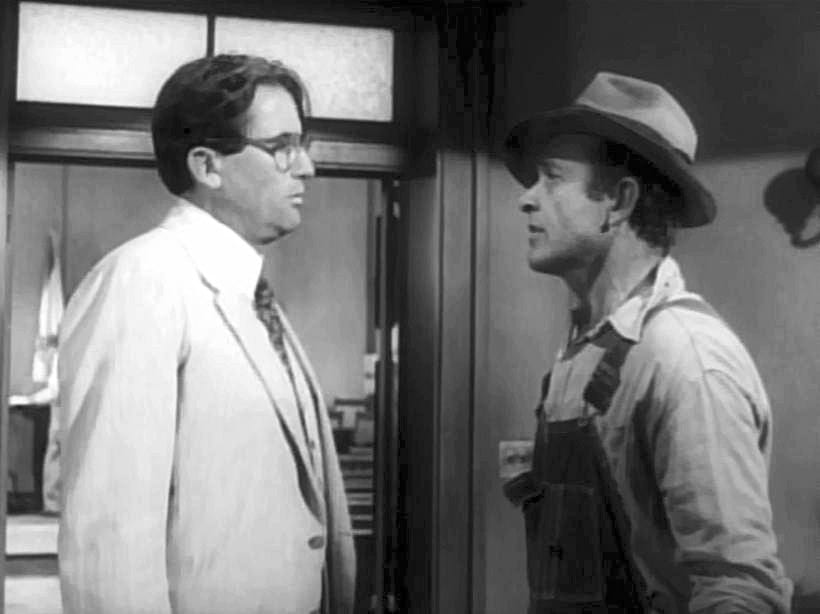 When it was published in 1960, Harper Lee’s To Kill a Mockingbird won the Pulitzer Prize for literature and became an instant classic. In 1962, it was made into a movie starring Gregory Peck, a role for which he won an Academy Award for Best Actor.

The story is based on Lee’s childhood in rural Alabama during the 1930s. The narrator is six-year-old Jean Louise Finch. The protagonist is her father, Atticus, who is a small-town lawyer appointed by the court to represent Tom Robinson, a black man who has been charged with raping Mayella Ewell, a young white woman. Despite the community’s near universal condemnation, Atticus defends Tom in and out of court.

One night, Atticus sits vigil outside the county jail where Tom is being held. A lynch mob arrives, and, while Atticus blocks their way, little Jean Louise appears and sweetly greets some of the lynchers by name. Shamed by her innocence, they back down.

At the trial, Mayella testifies unconvincingly that Tom raped her. When Atticus gently cross-examines her, she breaks into tears and angrily repeats her claim.

Under questioning by Atticus, Tom convincingly protests his innocence. After Atticus’ closing argument, it is clear to the reader that Mayella is lying and Tom is innocent.

But facts and logic do not carry the day. The jury quickly convicts Tom. While Atticus is visiting Tom’s wife to discuss the appeal, word comes that Tom has been shot and killed while trying to escape.

Viewing this classic tale from the perspective of 2018 and the #MeToo movement, it is clear that Harper Lee, a female, was a self-hating misogynist who promoted for profit the idea that a woman could actually lie about sexual assault and that such a lie couldunfairly destroy an unjustly accused man’s life. Atticus Finch, the so-called hero of the story, is glorified for questioning the victim’s credibility, as if that sort of behavior is supposed to be acceptable and, even worse, praiseworthy. How did such a disgustingpiece of trash get published? Why haven’t the book and movie been banned for promoting a negative stereotype of women?

And Gregory Peck? What a pig! How much was he paid to portray Atticus as a brave seeker of truth? His estate should be forced to pay retributions to the National Organization for Women.

By today’s standards, the only heroes of the story are the all-white jurors who saw through Atticus’s trickery and believed the female victim.

These are just some of the thoughts that have come to mind over the past week as Christine Blasey Ford has been negotiating the terms of her appearance before the Senate Judiciary Committee. Senator Charles Grassley has rejected as “unreasonable” Ford’s demand that she, the accuser, must testify after Brett Kavanaugh, the accused. Why would Grassley and the other committee members reject this demand? Don’t they understand that the paradigm has shifted and that Ford’s sketchy allegations of non-consensual teenage groping by Kavanaugh must be believed and that the burden is on Kavanaugh to somehow clear his name? Based on that premise, of course Kavanaugh should go first. Since he has been accused by a woman, it’s up to him to explain himself without knowing any of the pesky details such as the exact what, when, and where of his alleged actions.

Those are today’s rules. The old system under which a female accuser had the burden of proof was a product of the oppressive patriarchy. Under the new, improved, much more efficient justice system, a woman’s accusation alone should be enough after which it is up to the squirming male worm to try to wriggle his way out it. Why? Because all women tell the truth all the time and all men are pigs and must be destroyed.

Unless, of course, the accused male is a progressive Democrat.

George Parry is a former federal and state prosecutor who practices law in Philadelphia. He blogs at knowledgeisgood.net and may be reached by email at kignet1@gmail.com.