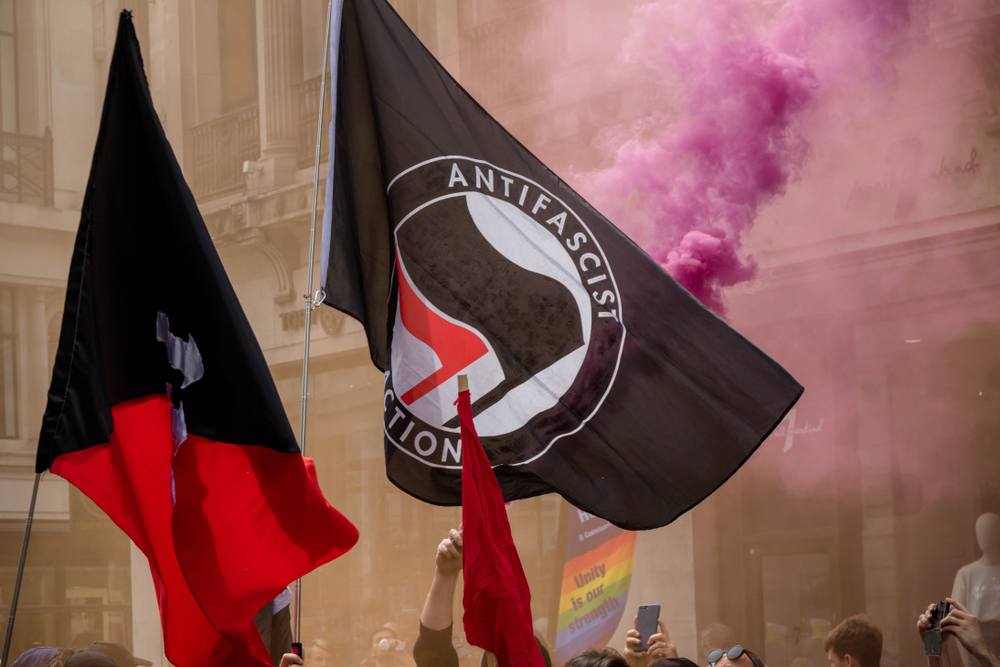 As we’ve said before in this space, a stolen election breaks the republic. And what comes after the republic is unknowable.

The post-republic can look like Rome, where power goes to whichever demagogue can control enough money and resources to supply the largest army and rule as a military dictator. It can look like Venezuela, where a small number of commie kleptocrat loyalists hoard supplies and capital and the rest dive in dumpsters for dinner. It can look like Nazi Germany, where National Socialism is paired with a genocidal hatred of The Other and mass murder looms.

Or it can look like Chile. Helicopter rides and all.

What the post-republic looks like in America isn’t known, and won’t be known for some time. The hope, which is fading, is that we don’t need to find out because we haven’t yet entered the post-republic.

But while there are still possibilities, scenarios, and processes to preserve the republic against a stolen election, and today’s events on Capitol Hill will see them play out, the post-republic does beckon.

It beckoned to Josh Hawley on Monday. The Senator, a Republican from Missouri, was one of the first to announce he would object to the certification of electors.

“Following both the 2004 and 2016 elections, Democrats in Congress objected during the certification of electoral votes in order to raise concerns about election integrity,” Hawley said a week ago. “They were praised by Democratic leadership and the media when they did. And they were entitled to do so. But now those of us concerned about the integrity of this election are entitled to do the same.”

“I cannot vote to certify the electoral college results on January 6 without raising the fact that some states, particularly Pennsylvania, failed to follow their own state election laws. And I cannot vote to certify without pointing out the unprecedented effort of mega corporations, including Facebook and Twitter, to interfere in this election, in support of Joe Biden. At the very least, Congress should investigate allegations of voter fraud and adopt measures to secure the integrity of our elections. But Congress has so far failed to act.”

Hawley has been joined by a dozen or so Republican colleagues, though certainly not a majority of the Senate. There have been well over 100 Republican members of the House who have also said they would object to the certification of electors. Despite the legacy corporate media and the Big Tech social platforms doing everything in their considerable power to assure the public that there is “no evidence” of a stolen election, something which is frightening in its own right considering the inarguable irregularities surrounding voting in at least six battleground states all “won” by Joe Biden – in all of which there was an unprecedented halt in the counting of votes on Election Night – two-fifths of the public, if not more, now lack confidence in the integrity of the 2020 election.

We’ll see what that produces at the joint session of Congress presided over by Vice President Mike Pence. It’s fair to consider something earth-shaking coming out of the session as a long shot.

But Hawley’s outspoken leadership on the question of a stolen election offered him a taste of the post-republic Monday night.

“Tonight while I was in Missouri, Antifa scumbags came to our place in DC and threatened my wife and newborn daughter, who can’t travel,” Hawley tweeted Monday night. “They screamed threats, vandalized, and tried to pound open our door. Let me be clear: My family & I will not be intimidated by leftwing violence.”

The Vienna, Virginia police were called, and cited the “demonstrators,” who took video of themselves shouting threats to “fight back” into bullhorns on Hawley’s front lawn, for code violations. This after angry neighbors confronted the small mob and demanded they disperse from a residential neighborhood.

Hawley’s tweet was set upon by hundreds of leftists calling him a liar, seizing upon his perhaps having oversold the “vandalism” (they left a pamphlet copy of the Constitution, which obviously they haven’t read given that nothing Hawley has advocated for is either unconstitutional or unprecedented) which occurred.

Of course, the fact that Antifa “demonstrators” arrived in a residential neighborhood after dark attempting to intimidate Hawley’s family was never even mentioned by his detractors as a serious departure from civil norms.

It wasn’t long ago that it was considered a massive breach of the peace to invade somebody’s residence in reaction to what they do at the office. In a republic, those things do not happen.

But they happen in a post-republic. They happen all the time.

Because in a post-republic, the people who end up with political power aren’t the richest, strongest, wisest or smartest. They’re the meanest and nastiest. They’re the ones willing to do the things other people aren’t. And in a post-republic, the level of audacity of one’s misbehavior is directly proportional to the chances of getting away with it.

That’s why the Left likes to talk about how “socialism hasn’t been done correctly yet,” and assuring us that if they were in charge they’d make America into Denmark. This is, of course, a lie. The Bolsheviks didn’t promise Russia that it would have Josef Stalin for 30 years, did they?

So who was it specifically trying to intimidate Josh Hawley? Well, the first “official” Antifa outfit to call the Senator a liar was something called Shut Down DC, a group with a definite, if short, history. Kyle Shideler and Dave Reaboi, in an important article at American Greatness last October, illuminated who they are…

Shut Down DC was founded in 2019 as a coalition of DC-based direct-action groups, initially launched around the climate change agenda, and focused primarily on agitating for the Green New Deal. The group was sponsored by All Out DC, a local Antifa group with a professed objective of, according to its Twitter profile, “Burn Down the American Plantation.”

The group’s ambitions are greater than the November election, of course; its members are not simply Democratic partisans. The Disruption Project urges its supporters to “stand up and take action against the unjust systems of racial capitalism, the heteropatriarchy, white supremacy and settler colonialism.” Its more immediate goals include an effort to “dismantle the systems that uphold structural racism and win reparations for Black folks, win some sort of repatriation of land to indigenous people, create an open US border and an end to imperialism, and a just transition out of a destructive economy.”

In this understanding, any Trump victory will be treated as a “coup.” This is a new and radical thread that runs through similar documents and statements from anti-Trump partisans in left-wing organizing and media alike, from more mainstream groups like the Transition Integrity Project to Antifa. A candidate being declared the projected victor—what was once a completely normal tradition of America’s election night drama—has been transmogrified, through intense hatred of the president and indulgence in projection, into an authoritarian scheme justifying extraordinary measures.

It’s unsurprising, then, that groups like Shut Down DC plan demonstrations beginning on Election Day. It proposes an initial occupation of Black Lives Matter Square in Washington on the evening of the election, November 3. Shut Down DC plans multiple disruption operations from November 4-7, aimed at preventing the Trump campaign from declaring an election day victory. From November 8-11, the focus shifts to Capitol Hill, as Congress is expected to return for the lame-duck session.

As recently as last year, Shut Down DC’s directors were Liz Butler and Patrick Young, both veteran professional organizers with decades of experience between them. As environmental activist group Friends of the Earth’s Vice President of Organizing and Strategic Alliances, Butler played a role in Inauguration Day protests against President George W. Bush in 2001. She also assisted in organizing IMF protests a year later, leading to over 600 arrests, as protesters targeted multiple locations throughout the city, and threw rocks and smoke bombs at police. Washington, D.C. was subsequently sued for its aggressive (though largely effective) crowd dispersal tactics in a long-running case that was finally settled in 2016.

Shut Down DC’s other director, Patrick Young, markets himself as a professional direct-action organizer for hire, offering “training, action support, strategic research, and digital campaign support.” After a stint at the Service Employees International Union (SEIU), America’s second-largest labor union, Young is currently employed by the International Brotherhood of Teamsters. On his LinkedIn page, he touts his volunteer experience with the Continental Collective of Rising Tide North America, an environmental direct-action group.

On his website, Young writes about “Where and How” election chaos will play out. He ends the piece by warning, “those of us who are committed to seeing Donald Trump removed from office should start organizing now to fight back against the Trump administration’s systematic efforts at voter suppression, hit the streets in key states where election outcomes are likely to be contested, and be ready to take bold direct action to bring Washington, DC to a standstill if Trump refuses to concede.”

Got all that? There’s your post-republic players setting the groundwork for what comes after the rule of law crumbles away and might makes right. It’s union goons and environmentalist nuts, it’s deranged transgender activists and Black Lives Matter soreheads. It’s whoever can be ginned up for street theater to start descending into…whatever. This time it was a pamphlet on Hawley’s door. Maybe next time it’s a Motolov cocktail.

And we’re now past the point, it seems, where it’s even controversial to spend the night hanging around a man’s front door hollering threats through bullhorns.

The goons outside of Hawley’s house offered up the entirely unoriginal, and not quite accurate, chant of, “This is what democracy looks like!” But what they really mean is this is what the post-republic looks like. And they’re the exact people the founders of the American republic wanted to guard against when the Constitution was written.

What those men would think of us today should sadden every American. Regardless of what happens on Capitol Hill today.