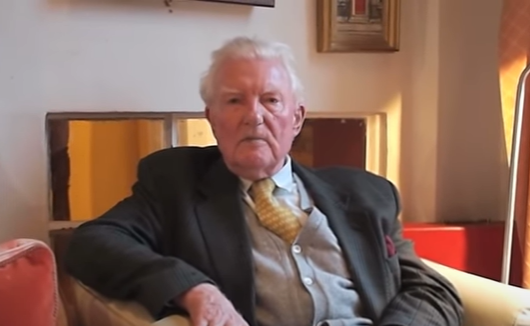 The study of history is a powerful antidote to contemporary arrogance. It is humbling to discover how many of our glib assumptions, which seem to us novel and plausible, have been tested before, not once but many times and in innumerable guises; and discovered to be, at great human cost, wholly false.
— The Recovery of Freedom (1980)

On Thursday, Jan. 12, 2023, the author of those words, British historian Paul Johnson, passed into the pages of history himself at the age of 94. One of the most productive British authors and journalists of the last half century, his voluminous writings included more than 50 books, 28 years of columns for London’s Spectator, and hundreds of articles in numerous magazines and newspapers.

In an editorial tribute last weekend, the Wall Street Journal noted that “[f]ew working journalists have written history with as much elan and narrative force” as Johnson did. “This devoted Christian and Catholic gentleman, this truly Renaissance man,” wrote Francis P. Sempa in these pages on Saturday, “was the greatest chronicler of our age.”

Johnson was himself a consummate intellectual, the honest and scholarly kind committed to truth for the sake of it.

Some of Johnson’s books are masterpieces of epic proportion: Modern Times: A History of the World from the 1920s to the 1980s; Ireland: A Concise History from the Twelfth Century to the Present Day; Art: A New History; The Civilization of Ancient Egypt; The Renaissance; A History of Christianity; A History of the American People; A History of the Jews; and A History of the English People; plus biographies of Mozart, Napoleon, Washington, Churchill, Socrates, John Paul II, and God knows who else (because Johnson wrote a book about Him too). You name it, there’s a good chance Johnson penned an article or a full-blown history of it.

Johnson’s perspective is often described as “conservative,” but I always found his work simply good, factual reporting of history. He didn’t cherry-pick the evidence to support a preconception, let alone a misconception.

In his early days, Johnson’s political outlook was “leftist” by his own admission. But he not only wrote history; he learned from it. And the more he learned, the less credible the leftist perspective was. By the mid-1970s, he was a cogent critic of the Left and its union allies that were bringing Britain to its knees. He later became a friend, adviser, and speechwriter to Prime Minister Margaret Thatcher.

In his 1983 tome Modern Times, Johnson offered this judgment that rings even more true today than it did 40 years ago:

Men are excessively ruthless and cruel not as a rule out of malice but from outraged righteousness. How much more is this true of legally constituted states, invested with all this seeming moral authority of parliaments and congresses and courts of justice! The destructive capacity of an individual, however vicious, is small; of the state, however well-intentioned, almost limitless. Expand the state and the destructive capacity necessarily expands too. Collective righteousness is far more ungovernable than any individual pursuit of revenge.

My favorite of Johnson’s books is his 1988 classic, Intellectuals. It’s an insightful examination of the personalities and behavior of more than a dozen left-leaning thinkers — the super-pontificating, state-worshiping types that are full of prescriptions for the rest of us. Among the better known of them are Rousseau, Marx, and Sartre; the less well known include Bertolt Brecht, Victor Gollancz, and Lillian Hellman.

Johnson was himself a consummate intellectual, the honest and scholarly kind committed to truth for the sake of it — unlike the charlatans, hypocrites and monsters he wrote about in Intellectuals. He proved that you can be an intellectual without falling hopelessly in love with yourself or tossing self-awareness to the wind or fancying yourself God’s gift to a stupid humanity in need of your wisdom. And he understood why “the man in the street” is often wary of those who pontificate from ivory towers:

The belief seems to be spreading that intellectuals are no wiser as mentors, or worthier as exemplars, than the witch doctors or priests of old. I share that skepticism. A dozen people picked at random on the street are at least as likely to offer sensible views on moral and political matters as a cross-section of the intelligentsia. But I would go further. One of the principal lessons of our tragic century, which has seen so many millions of innocent lives sacrificed in schemes to improve the lot of humanity, is — beware intellectuals. Not merely should they be kept away from the levers of power, they should also be objects of particular suspicion when they seek to offer collective advice.

None of Johnson’s subjects in Intellectuals can match Karl Marx for sheer loathsomeness and shameless fakery. He was a virulent racist and anti-Semite with a vicious temper (“Jewish n****r” was one of his favorite epithets). On a good day, he enjoyed threatening those who disagreed with him by blurting, “I will annihilate you!” His personal hygiene was nonexistent. He was heartlessly cruel to his family and anyone who crossed him. This is the same man who postured as a thinker whose ideas would save humanity.

We learn in Intellectuals that the chef who cooked up communism professed to be “scientific.” But, Johnson argued, “there was nothing scientific about him; indeed, in all that matters he was anti-scientific.” Marx’s most famous lines — including “religion is the opiate of the masses” and workers “have nothing to lose but their chains” — were flagrantly ripped off of others, such as the French Revolutionary lunatic François-Noël Babeuf. Furthermore, Johnson explained:

What emerges from a reading of Capital is Marx’s fundamental failure to understand capitalism. He failed precisely because he was unscientific: he would not investigate the facts himself, or use objectively the facts investigated by others. From start to finish, not just Capital but all his work reflects a disregard for truth which at times amounts to contempt. That is the primary reason why Marxism, as a system, cannot produce the results claimed for it; and to call it “scientific” is preposterous.

Marx’s own mother, I learned from Johnson, said she wished her freak show of a son “would accumulate some capital instead of just writing about it.” Moreover, the great historian informed us that Marx “never set foot in a mill, factory, mine or other industrial workplace in the whole of his life,” steadfastly abjured invitations to do so, and denounced fellow revolutionaries who did. He never let a fact or a glimmer of reality stem the flow of poison from his pen. He had no money because he refused to work for it, then cursed those who had it and didn’t share it with him.

Within what passes for “higher” education these days, Marx still has lots of avid disciples. Carnegie Mellon University, for example, hosted a “celebration” of the man at which speakers praised the bohemian quack as a “great man” with “an incredibly optimistic vision.” It was Karl, not Groucho, of whom they were speaking — the man whose vitriol led to regimes that killed an estimated 100 million people. As economist Thomas Sowell summed it up so well, “Socialism in general has a record of failure so blatant that only an intellectual could ignore or evade it.”

What Paul Johnson wrote about Karl Marx, though thoroughly devastating, was but a small fraction of what flowed from the historian’s keen mind and prolific pen. Anyone interested in the past owes it to himself to find out what Johnson had to say about it.

History repeats itself, according to the old maxim. If it does, then there’s hope that someday humanity might produce another historian like Paul Johnson.

Lawrence W. Reed is president emeritus of the Foundation for Economic Education and blogs at www.lawrencewreed.com. For this essay, he drew from one he wrote about Paul Johnson on the occasion of the British historian’s 90th birthday in 2018.