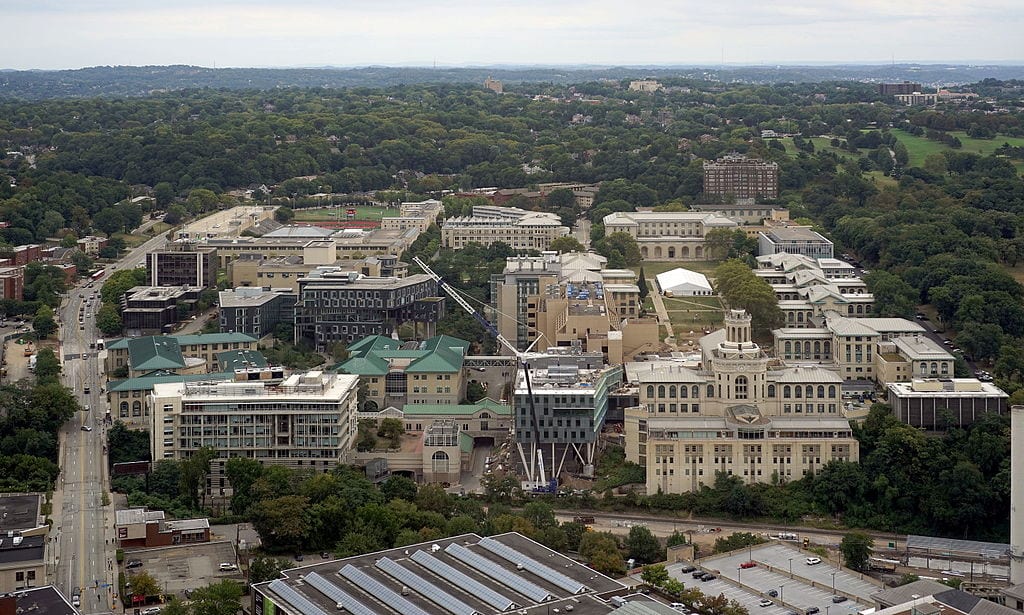 Vladimir Lenin was said to have boasted that capitalists would give his communists the rope to hang them. The self-anointed keeper of the Marxist flame, co-namesake of history’s deadliest ideology — Marxism-Leninism — would have chortled at what’s happening at Carnegie Mellon University in Pittsburgh. In 2018, this prestigious university, named for two of history’s wealthiest capitalists, freshly infused with a huge quarter-billion-dollar-plus estate gift from industrialist William S. Dietrich II, and where students are hit for $70,000 per year, will be celebrating the birth of Karl Marx.

The year 2018 is Marx’s bicentennial, and his proponents at Carnegie Mellon are not forgetting. Quite the contrary, they are celebrating. And if you think “celebrating” might be too strong of a word, well, go online and watch the inaugural “Marx at 200” lecture (assuming it isn’t scrubbed from the website after this article appears), with opening remarks by the dean of the Dietrich College of Humanities and Social Sciences, Richard Scheines, followed by presentations from faculty members Kathy Newman and David Shumway. A warning: if you’re a Carnegie Mellon student, alumnus, faculty member, board member, or donor who has friends and family that escaped the Iron Curtain, Fidel’s Cuba, Red China, Ceausescu’s Romania, Vietnam, Cambodia, or any other Marxist despotism, you will not be pleased.

Scheines set the tone in his welcoming remarks by repeatedly stating that the purpose of the series is to “celebrate” the birthday of Marx, who he calls “the great man” with “an incredibly optimistic vision.” Dr. Scheines said it was a “pleasure to open the year celebrating Marx’s two-hundredth birthday.” He shared this personal story:

I grew up in the 1960s in a household with open-minded progressive New York parents, but for most of my early years Karl Marx was only known to me as the author of communism — a political idea I knew nothing about but which I nevertheless attached to Joseph Stalin, the Prague Spring, the Iron Curtain and the horror that was the Cultural Revolution in China. And anti-communist propaganda was powerful stuff in the 1960s, and I was predictably a product of it. Nothing in my high school education probed even slightly beneath the surface of an incredibly superficial view of Marx or Marxism…. So, when I took a course in college in 1975 on modern political and economic thought, I was caught completely by surprise when I actually read the great man and some of his followers. Not only was I struck by the nuance and depth and sheer novelty of the arguments but also by the weird optimism of it all.

With respect to Dr. Scheines, I’ve read Marx countless times. I’ve done numerous lectures and books on communism, and I’m currently writing a biography of Marx specifically. I teach a course on Marxism at Grove City College each spring semester. I’ve never detected a whiff of depth in the man and his concepts, let alone optimism. Marx was extraordinarily pessimistic. The only “optimism” might have been his quixotic utopianism. As for novelty in Marx? Oh, yes. His ideas were novel, alright — to the point of inanity if not insanity. If you haven’t read the Communist Manifesto, do so, and you’ll by shocked by the sheer fantasy and sophistry. It’s an impossible piece of work, obviously doomed for failure. Marx gets wrong not only economics but human nature. It has never ceased to amaze me that his silly ideas could have appealed to anyone, and especially still today after a century (and counting) when the implementation of those ideas generated vast killing fields among completely unrelated and disparate countries and peoples whose only commonality was their attempt to implement Marxism. Wherever Marxism went, it destroyed.

Scheines, however, wonders why Marx has “gotten such a bad rap and capitalism such a good one.” Even odder, Scheines maintains that “the academy” “can’t be unwilling to celebrate Marx, even though it might be anathema to those who control the current political landscape.”

Unwilling? This begs the obvious question: when has academia been unwilling to extol Marx? Scheines’ portrayal of the academy and his own experiences makes it sound as though the academy is conservative and has been distorting the “great man” with rampant anti-communist propaganda.

Does anyone really think that academia, widely known for being anti-conservative, pro-communism, and, above all, of being anti-anti-communist, has spent recent decades filling students’ minds with “anti-communist propaganda”?

Scheines then turned over the platform to the Marx-birthday organizer Kathy Newman, an associate professor of English who writes on “the masses and the mass culture.” Scheines introduced Newman as a “political activist” who (I’m not making this up) showed up at the CMU president’s welcome reception “dressed as Karl Marx.” This gesture was, said Scheines, “great stuff” — reflective of Newman’s “courageous sense of humor.”

For Newman’s part, the dress-up hasn’t stopped there. Newman has big plans for a Marxist makeover at CMU in 2018, with a lengthy series of events scheduled. She touted a striking list of topics and speakers for the Marx-fest, a roster that’s extraordinarily one-sided, especially for a university that hails “diversity.” The topics include presentations on “The End of Work,” “Building Communities of Power in the Age of Trump,” “Marx and the Global South,” “Utopian Smorgasbord: Where in the World is Marx Today,” “Saying ‘We’ Again: Democracy and Communism,” “Art and the Indirect Politics of Revolution,” and “The Politics of Everybody: Feminism, Queer Theory, and Marxism at the Intersection” (note how “everybody” here seems limited to, well, not everybody, but only to feminism and queer theory). There will also be a power duo on Marx by two recent best-selling biographers, Mary Gabriel and Jonathan Sperber. The speakers carry established left-wing bona fides with groups like Black Lives Matter and Occupy Wall Street. And the festivities run the gamut from a Marx puppet show to a Karl Marx credit card (yes, the height of ironies).

In the “Marx at 200” kick-off lecture, Professor Newman stepped aside and handed the mic to David Shumway, another professor of English at CMU, who changed their focus from “Why Marx Now” to “How Marx Now.” Shumway argues that Marx “is best understood as a liberal,” as a founding father of “social democracy,” and portrays the father of communism as a freedom-fighter, as a champion of “individualism” and “self-mastery.” States Shumway: “rather than justice, what motivates Marx is freedom.”

That claim of Karl Marx as a herald of freedom will surely shock not a few survivors of the Iron Curtain. But alas, so it went in the celebratory launch for “Marx at 200.” Really, it seems less a birthday for Marx at Carnegie Mellon than Valentine’s Day for him and his ideology and its offshoots.

Speaking of which, from what I could tell, not one lecture among the many will address the elephant in the Marxist living room — namely, the 100 million-plus corpses generated by a wide variety of communist regimes operating in the name of Marx. That communist death toll in the 20th century far exceeds the number of Nazi deaths and even the combined death tolls of World War I and World War II, the two most lethal conflicts in human history. Those deaths are, without question, directly attributable to the ludicrous ideas peddled by Marx and Engels in their profoundly but dangerously ignorant Manifesto. A six-year-old could read that hateful diatribe and know immediately that millions would be killed trying to implement that load of lunacy.

But beyond the obvious issue of Marxist ideology and Marxist death, Carnegie Mellon’s Marx-fest also should not ignore another crucial aspect of Marx: his angry racism. CMU’s liberals might want to take note:

For starters, Karl Marx flung the “N”-word effortlessly. He was cruel to his son-in-law, Paul Lafargue, who was partly Cuban. Marx recoiled at the “Negro” blood he detected in his son-in-law, denigrating the young man (who eventually committed suicide in a joint pact with Marx’s daughter) as “Negrillo” or “The Gorilla.” Marx’s writings are littered with nasty epithets: “greasy Jew,” “the little kike,” “water-polack Jew,” “Jew Braun,” “the Jewish N–ger.”

Referring to one such poor soul, Ferdinand Lassalle, in a July 30, 1862 letter to fellow racist Engels, Marx discerned with a sense of confident pride: “It is now perfectly clear to me that, as the shape of his head and the growth of his hair indicates, he is descended from the Negroes who joined in Moses’ flight from Egypt.” Lassalle’s “cranial formation,” detected Marx, a proud evolutionist, was the giveaway. Marx did allow for an exception: “unless his mother or grandmother on the father’s side was crossed with a n–ger.” With a mordant twinkle in his eye, Marx concluded: “This union of Jew and German on a Negro base was bound to produce an extraordinary hybrid.”

Karl Marx was a vile racist who founded the deadliest ideology in history, and this year he will be celebrated at Carnegie Mellon University.

One must wonder what persons of color at Carnegie Mellon University think about that, particularly at an annual price-tag of $70,000-plus per year, despite a huge largesse of government money. (How’s that for solidarity with the proletariat?) Bill Dietrich, who bequeathed $265 million to CMU, one of the largest private donations in the history of higher ed, is surely rolling over in his grave, as are Mr. Carnegie and Mr. Mellon.

“The Communists disdain to conceal their views and aims,” concluded Marx and Engels in the final words of their crowning work.

At Carnegie Mellon University, one shudders to think of all the crimes and tragedies of communism that will be concealed in the name of “the great man” Karl Marx in 2018.