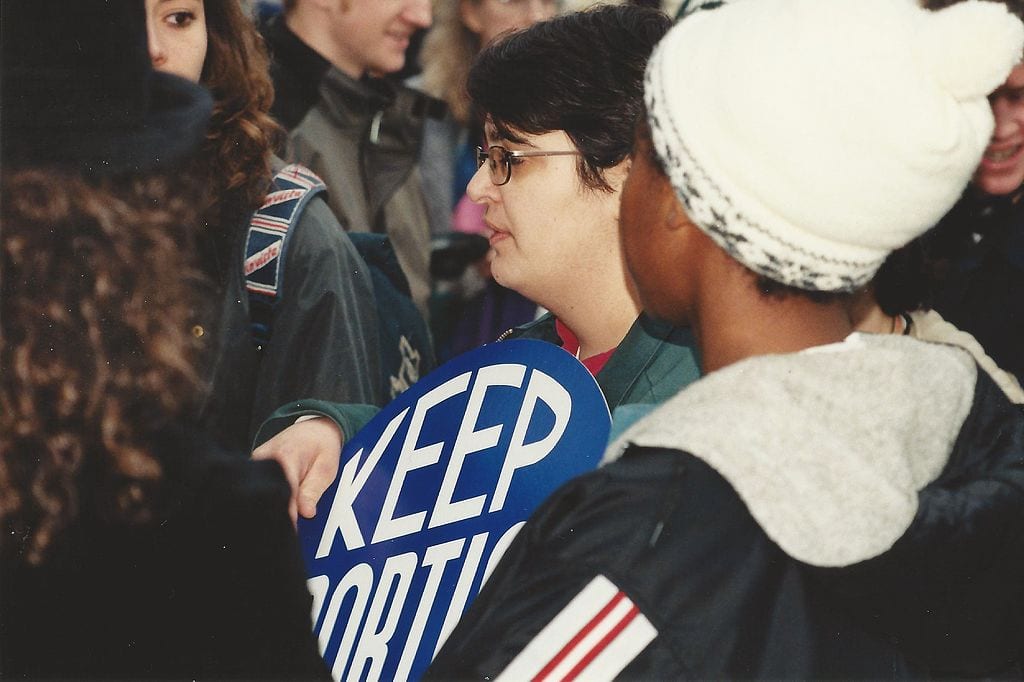 I need to disclose two very private facts. They are not causally related. First, when I was in my mid-teens, my girlfriend had an abortion. Second, I am an occasional user of pain management drugs such as morphine and oxycodone, which I typically acquire through illicit markets on the dark web. These two experiences — the abortion and my use of opioids — illustrate some paradoxes in the American politics of the body. Let me provide a few additional details about each confession in order to provide a context for my later description of the paradoxes.

The pregnancy was a product of unprotected sex enabled by the empty house to which my girlfriend and I returned after school most days. We both knew a pregnancy was a possibility, but we vastly underestimated the likelihood of that possibility. We were of the belief that it was “difficult” to get pregnant. When it happened we were both shocked — it had to be a fluke! It wasn’t, of course. We were scared and we didn’t tell anyone except a female friend who had a lot of sexual experience. She gave us the number to Planned Parenthood. I barely knew what an abortion was — I had never really had any reason to think about it. At the Planned Parenthood appointment, the consultant presented a single option: abortion. Without asking our thoughts, she shuffled us out to the appointment desk, where we chose a date for the procedure and picked up some samples of birth control pills. A week later, it was done. We did it because it was easy. I had a vague sense that what we had done was wrong. But over the following years and decades, that sense grew — significantly. I’m not sure how my life would have been different had that child been born. But the shame of my cowardice, passivity, stupidity, and apathy in the events related to that abortion have been with me for my entire adult life. I regret that abortion. Remembering that I am forgiven in God’s eyes is only a bit easier than forgiving myself.

A decade after that abortion, life was presenting me with some great possibilities. I was in the early stages of a unique professional career and I was in a loving relationship with my wife. And my back was constantly killing me. I had some pre-existing musculoskeletal conditions in my spine, and when I sought treatment for this new, more intense pain, I was diagnosed with another issue. At first, this condition was fairly easily managed through exercise, stretching, and non-steroidal anti-inflammatory drugs (NSAIDS) like Advil. But there were spells when the pain would be incapacitating, and for those times I had a prescription for hydrocodone (a low-potency opioid) to take as needed. And that was great. Then, around ten years ago, the government and the medical community began to take notice of what is now called “the opioid crisis.”

As the war on painkillers grew and became institutionalized, it was harder and harder to find doctors to prescribe hydrocodone. One after another general practitioner would say to go to a specialist, and specialists were being pressed hard to recommend NSAIDs. My protests would often be answered with a prescription for tramadol — a drug that is not an opioid but that mimics some of their pain-killing effects. Then, as the opioid crisis became a national news story, even tramadol prescriptions became closely monitored. One pharmacy actually refused to fill my prescription. At that point, I began loading up on tramadol on my periodic trips to central America. But smuggling prescription drugs through customs was no fun. One day, I was talking to a friend in my neighborhood about his back pain, and he offered to share some oxycodone. I asked him where he got it and he told me about the dark web. That sounded sketchy, but I took him up on the offer. The next time my back flared up, I cut that 30 milligram tablet into thirds and took one chunk. I was able to sleep without the pain waking me up for the first time in a few nights. After a twenty-minute crash course from my friend about the ins and outs of the dark web, I was ready to try myself. Three days later my mailman brought me a package with some hydrocodone. Over time, I realized that it was harder to find hydrocodone on the dark web. There are far more listings for more powerful opioids like morphine, oxycodone, suboxone, and fentanyl. Further, the hydrocodone that is available is rarely any cheaper than the drugs listed above. A savvy buyer, then, knows that he can get more doses by spending a hundred dollars on morphine (rather than hydrocodone). And so, about 3 times a year I purchase some morphine or oxycodone from the dark web to manage my back pain.

I am not an addict. I use these opioids as a last resort when regular exercise and Advil fail. Careful use of opioid conversion charts enable me to stretch a single tablet of morphine into 3 to 4 doses. I know I am breaking the law, but it is, in my mind, a civil disobedience. Surgery is not an option for my back. Opioids help me when I need them. And I’m not going to allow the American Medical Association or the federal government deny me of my preferred treatment option — especially when they have even restricted access to opioid alternatives like tramadol, which are available over-the-counter in many countries. As we work to solve the opioid crisis, we need to remember cases like mine — where the crackdown on prescriptions and prescribing doctors has actually forced people who have a genuine need for opioids to seek them on the black market (where they are often exposed to stronger opioids with higher potential for addiction). In other words, it is possible that restricting access to these drugs has actually worsened the problems that we are trying to address.

Buying pain management drugs from the dark web is this decade’s answer to the “back alley abortions” that Roe v. Wade sought to eliminate. And this brings me back to the abortion that I regret. I am happy that it didn’t happen in a back alley. But frankly, the Planned Parenthood clinic wasn’t a much more welcoming place, and it looked only marginally more sanitary. Abortions aren’t only available “on demand.” We never demanded one. We were suggested one. And while I can’t say we were coerced (I wish we were because then I wouldn’t have to blame myself), it was a very strong suggestion.

America is in the midst of a profound debate over the politics of the body. And neither side seems aware of how fraught with contradiction this debate is. Roe v. Wade legalized abortion on the questionable grounds of a right to privacy when it comes to medical decisions. Indeed, “health care” is one euphemism that abortion rights advocates use to refer to abortion. When seeking this kind of “care” for the body, doctors never try to ferret out a woman’s reasons for wanting an abortion. Patients are supposed to have a right to their preferred method of “treatment.” In contrast, when I request a prescription for hydrocodone, doctors are trained to divine my reasons for wanting it. They are left to discern for themselves if my situation is such that they will agree to my preferred mode of treatment. And if they subjectively decide that my back pain isn’t that severe, well…that’s just another sleepless night for me.

A frequent sight at pro-choice gatherings is a sign that says “Keep Your Laws Off My Body.” These signs are stupid. A big part of the function of laws in general is precisely to govern the body. Speed limits determine how quickly you can move your body. Helmet and seatbelt laws clearly act upon the body. Public indecency laws are ways of policing the body. We would all see the absurdity of Harvey Weinstein, after getting caught ejaculating into a flower pot to a captive audience, saying “Keep Your Laws Off My Body.” Everyone is comfortable with laws that act on the body when it comes to deterring public defecation, for example. But when it comes to abortion, advocates insist that any intervention that restricts or regulates abortion in any way is a perverse abuse of legislative power.

I wonder how my pharmacist would react if after he refused to fill my tramadol script, I told him to “Keep Your Laws Off My Body.” Critics of my position will likely point to the public health threats posed by opioid drugs. But they remain silent regarding the public health consequences of abortion. Profound remorse (like I have) manifests differently in people. And surely, taken to the scale of society at large, we know that abortion has costs — physical, mental, spiritual, demographic, and even monetary. We need to resolve the contradictions in our politics of the body. There is great irony in a State of the Union address that simultaneously promises even greater restrictions on opioids and champions the right of terminally ill patients to bypass the FDA and try experimental drugs. Why does illness create a special right to bypass such restrictions? Four states allow physician-assisted suicide, nine states have legalized marijuana, and thirty-eight states have right-to-try laws. In 2003, Lawrence v. Texas effectively over-turned the nation’s remaining sodomy restrictions, taking the law off a great many bodies. Meanwhile, forty-seven states have laws requiring some or all riders to wear helmets on a motorcycle, and I can’t get a script for hydrocodone.

Unfortunately, the public discourse separates the debates about legal marijuana, abortion, opioids, helmets, and assisted suicide from one another as if they are unrelated. This separation ensures our contradictory approach to personal liberty when it comes to the body. Logically speaking, these issues need to be addressed together. Why is abortion a special case, where the rules governing other treatment options are suspended? Why is the availability of tramadol a separate issue from the availability of marijuana or hormone-modification drugs for “transitioning” children and teens? Laws are made to act on the body. What we need now is a dialogue on the legitimate contexts in which laws can restrict our authority over our own choices, as they relate to our bodies. This discussion will be difficult because almost everyone will have to give something up. It is not lost on me that my desire for on-demand opioids is at odds with my pro-life politics. I think I was led to this incoherence by my own experiences. But those divergent experiences were enabled by an incoherence in our philosophy of the body (and its relation to our democratic conception of individual liberty). The body politic must move towards a more fully articulated politics of the body.