News,Politics Nancy Pelosi,Politics,The Left Not For Long - The American Spectator | USA News and Politics
Menu
News
Not For Long 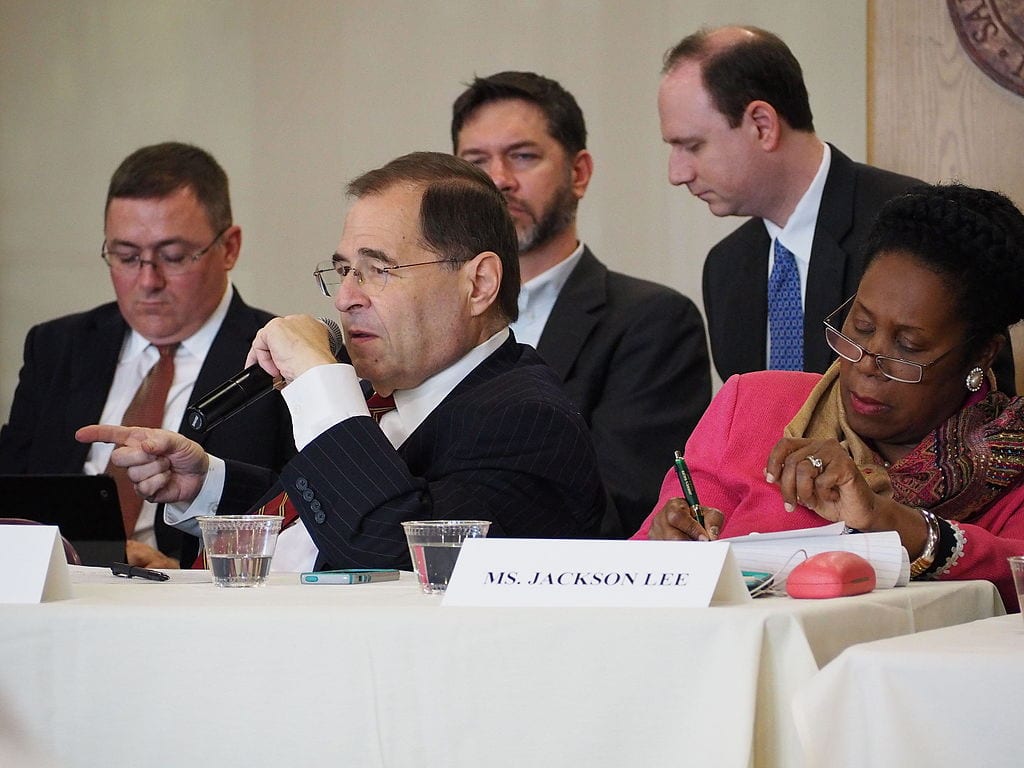 OK, so the Democrats did manage to pick up enough House seats — 32 as of Sunday night, with perhaps a couple more to be awarded after recounts of too-close-to-call races — to make Nancy Pelosi the next Speaker of the House.

At least, President Trump and the Republicans aiming to reverse the results of the 2018 midterms when the House is back up for re-election in two years, certainly hope it’s Pelosi. We already know the insane old woman from San Francisco is the best friend the GOP ever had, and she’s already signaling her second tour of duty as House Speaker will be every bit as toxic to her party’s political fortunes as her first was.

And this time, Pelosi won’t have the power to deliver any legislative victories like she did the first time, when a President Obama was available to sign bills Pelosi and then-Senate Majority Leader Harry Reid were able to ram through Capitol Hill. There will be no Obamacare, there will be no Dodd-Frank, and there certainly won’t be any of the other leftist fantasies like card check or cap and trade which couldn’t pass in 2009 or 2010.

There is a legislative victory available to Pelosi, if she’ll take it. That would be an infrastructure bill — a real one this time. Pelosi had an opportunity to pass a plan to rebuild the country’s roads, bridges, airports, seaports, waterways and other fixtures when Obama was inaugurated, but the so-called “stimulus” plan the Democrats in the House and Senate sent to his desk was light on pouring concrete and heavy on paying off public-employee unions.

Trump will demand something different, but he’s been quite vocal about his desire to improve the country’s infrastructure — and while there has been some movement on transportation and other such fixtures, there are still projects a consensus could be found for. Trump will likely put a proposal on the table that Pelosi might accept, and if the waste can be kept to a minimum it might be an example of how even at this late juncture there can be bipartisanship and adult governance.

But other than that? No. This is going to be a circus of the absurd.

Pelosi’s number one agenda item so far seems to be a demand to see Trump’s tax returns. The Democrats are talking about impeachment not just of Trump but of Supreme Court Justice Brett Kavanaugh. Maxine Waters, of all people, is set to become the chair of the House Financial Services Committee, and when she does she’ll all but certainly drive the Wall Street banks back into the arms of the GOP after they’ve spent the last few years dabbling in social justice warriorism. And of course there will be the other committee chairs — Nita Lowey at Appropriations, Jerrold Nadler at Judiciary, Adam Schiff at Intelligence, Elijah Cummings at Oversight, Frank Pallone at Energy and Commerce, among others. It’ll be a mess.

The Democrats will stage hearing after hearing after investigation after investigation, and every member of Trump’s cabinet is likely to be summoned to Capitol Hill for an inquisition over the next two years. What we know, though, is that House investigations don’t result in much. And we also know the House can stage all the impeachment votes it wants, but without the votes in the Senate to make those impeachments stick it’s little more than a waste of time.

And that’s what Pelosi is going to be as the House Speaker for the next two years — a waste of time. As Stephen Moore wrote in National Review Friday, Trump has the perfect foil for the next two years as he poises himself for re-election — which is far more likely now that Pelosi must share the blame for all that goes wrong while being poorly suited to take credit for what goes right.

It seems the thirty-odd House seats the Democrats managed to gain in last week’s elections weren’t enough to satiate some of their more vigorous partisans, as in the aftermath we seem to be inundated with insults not just to the white men who form the GOP’s base vote but also to other groups which are apparently insufficient in paying homage to the Democrat Party.

For example, the fact that one-sixth of black male voters in Texas chose Ted Cruz over Beto O’Rourke was enough to send the Boston Globe’s Renee Graham into a maelstrom of unhinged ranting, claiming the entire GOP is comprised of white supremacists and demanding that black men vote in lockstep with the monolithic vote given to Democrats by black women.

“Black women generally don’t vote against their self-interests. We vote as if our lives depend on it, because they do,” she declared.

And then there were the catcalls against white women for voting for Cruz (59 percent) and Brian Kemp (76 percent), despite something of a migration of suburban white women to Democrat House candidates. The feminist lawyer and New York Times columnist Jill Filipovic said of those numbers “Racism is a helluva drug,” while defrocked ESPN host Jemele Hill was even goofier. “The data shows very clearly that there are white women voting against their own best interests to preserve a patriarchy that they believe will ultimately help them. Not all, but clearly the majority,” she said.

And then Hill really dropped the hammer. “I’m not here to antagonize white women at all. I just want to know why so many of them seem intent on voting against the best interest of all women. They need to be held accountable, particularly as in race after race, black women show up and vote in support of feminist ideals,” she fumed.

These people don’t seem to recognize the old adage that you catch more flies with honey than vinegar. It’s pretty clear the Left will do more to drive persuadable voters back to the GOP than the GOP itself will.

If Trump really wants to insure his re-election, what he needs to do is to start drone-striking the people responsible for all the damn robocalls. They’re being described as an epidemic, and that’s not a lie. I’ll routinely get 10 a day, and that’s after installing the RoboKiller app on my phone which blocks some of them.

They’re all scams. They attempt to sell health insurance, student loan relief, car warranties and all kinds of other things people might need — but if you’re on their call list you’re going to get harassed whether you need what they’re purporting to sell or not.

I used to take these calls when I had time and then go through their menus to get to real human beings, and then I’d do everything I could to make myself as time-consuming and abusive as possible in an effort to get flagged as someone not to call. For a while I thought that would work, and then came October.

Now I’ve given up. I just don’t take phone calls from numbers I don’t recognize anymore. I’ll send those callers a text message saying “If you’re not a spammer, text me. I no longer accept phone calls from strangers.”

This is no way to operate, but it’s all we have left now. The process has been broken. Examples need to be made. Prosecutions are fine, but drone strikes are better.

Get it done, Mr. President.