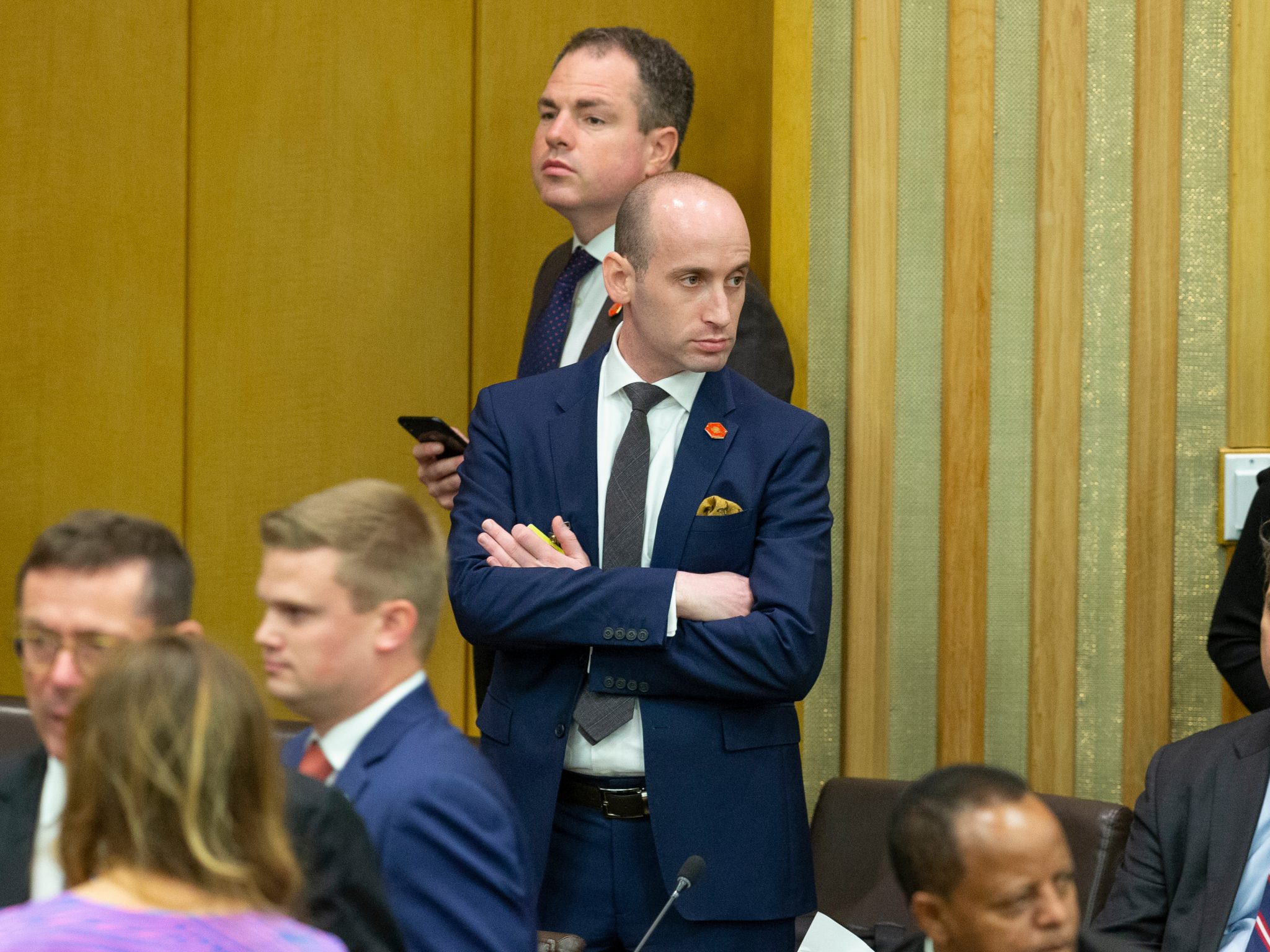 “Millergate” seems to have come and gone due to a commendable showing of huevos from White House brass. To be sure, apart from the evidence clearly not fitting the thought-crime — that is, emails from Miller pitching “anti-immigrant” stories to Breitbart News — the clearly coordinated media pile-on looked odd from the outset. Not only were the impugned emails first reported on by the Southern Poverty Law Center (SPLC), a group that’s recently lost almost its entire executive suite over its own charges of racism, but they also likely were purchased at top dollar and from someone who’s apparently a real, genuine racist — okay, “used to be.”

The surprise showing of White House backbone has confounded and enraged Democrats who, with the help of their media allies, are used to getting the scalps they call for. Still at it a full month after the emails dropped, NBC this week, for instance, published a report titled “After Stephen Miller’s white nationalist views outed, Latinos ask, ‘where’s the GOP outrage?’, ” in which they gave voice to a slew of left-wing Hispanics and open-borders pushers about the issue. Most prominent was House Democrat from Texas Veronica Escobar, who stated it was both “jarring” and “unacceptable” that her Hispanic Republican colleagues were silent during Democrats’ calls for Miller’s head. The report then proceeded to spotlight, seemly as ethnic heretics, the three most senior Hispanic Republicans in Congress, namely Rep. Mario Díaz-Balart, Sen. Marco Rubio, and Sen. Ted Cruz.

Escobar and NBC are actually right about the three GOP members’ “unacceptable silence” over the Miller revelations, although for the wrong reasons. Any of these members, including the rest of the GOP (not to mention the conservative media and even the White House), could have easily pushed back against the accusations against Miller and plucked out at least three elected Democrats who have far closer and far more serious connections to race-based nationalism than anything attachable to Miller — including from Latino sources.

Take Congressman Raúl Grijalva of Arizona, for instance. He’s called Miller a “sociopath” and helped create the petition calling for his firing. In the late 1960s, however, he contributed to a Latino ethno-nationalist periodical whose twin slogans were “My race first” and “Better to die on your feet than live on your knees.” Pretty strong stuff.

He was also active at the time in something called the Chicano Student Movement of Aztlan (MEChA), an organization that has openly called for violence and demanded that the American Southwest be returned to Mexico — “Aztlan” being the “real” name of the Southwest. What a “return to Aztlan” means is unknown, but, according to one former movement leader, once it is established, “Ethnic cleansing would commence: Non-Chicanos would have to be expelled.” An all-out race war, in other words.

Further, Grijalva led the Arizona branch of a political party named Raza Unida (United Race). It too called for a reconquest of the Southwest and ran candidates, who had to be Hispanic, in several elections in Texas before dissolving in the mid-1970s.

Raza Unida was founded by perhaps the most extreme Hispanic radical in U.S. history: José Angel Gutiérrez. Throughout his long career, Gutierrez made numerous public threats against whites and explicitly called for anti-white violence, including that “It’s too late for the Gringo to make amends. Violence has got to come,” and “We have got to eliminate the gringo, and what I mean by that is if the worst comes to the worst, we have got to kill him.”

One would think that if a close and direct association with someone like this was unearthed, it’d be fairly damaging to one’s political career and at least lead to calls from the media for an express disavowal. If you’re an ally of the New York–D.C. media axis, however, apparently not.

Who else was a top leader of Raza Unida? Rosie Castro, the mother of presidential hopeful Julián Castro. In addition to Raza Unida, she worked for another Gutiérrez organization, the Mexican American Unity Council, and they apparently remained close throughout the years, sitting down with one another for an interview back in 1996.

Julián, who among 2020 candidates the Guardian says has gone the “furthest” in attacking Miller — calling him a “neo-Nazi” — put up his mother’s 1971 Raza Unida campaign poster in his office when he became San Antonio mayor in 2009. He has long praised his mother’s activism, writing in his autobiography, “My mother’s fervor for activism affected the first years of my life, as it touches it today.” And as the New York Times fluff-reported years back, “In [Julián and brother Joaquin’s] spare time, they accompanied their mother to political events and strategy sessions, where they were exposed to her fiery style of radicalism.” Fiery anti-“Gringo” activism, apparently.

As for former DNC deputy chair and current Minnesota Attorney General Keith Ellison, he’s tweeted out several of the hit pieces against Miller, clearly forgetting his own run-in with the media (which was piddling and perfunctory in comparison) over his deep involvement with actual hate-spouting racists: the Nation of Islam (NOI).

Although NOI leader Louis Farrakhan is one of the few black nationalists the SPLC does target (without him, its 1,000-strong hate-group map would be almost completely white), it has not challenged Ellison in any of his many electoral campaigns — nor any of the other black politicians and celebrities who share an association with Farrakhan. This is despite Ellison apparently trying to cover up his relationship with Farrakhan during his run for DNC chair (which earned him four Pinocchios from WaPo at the time) and for showing his respect for Antifa — another group that’s so extreme the SPLC actually condemns them.

From the early ’80s to the late ’90s, when Ellison was an active NOI member, and up to 2006, when he finally condemned Farrakhan, the latter made the following public comments:

Zionists have control in England, in Europe, in the United States and around the world.

The Jews don’t like Farrakhan, so they call me Hitler. Well, that’s a good name. Hitler was a very great man.

White people are potential humans — they haven’t evolved yet.

The white man is our mortal enemy, and we cannot accept him.

There are scores more like this, but you get the point.

These are genuine examples of racial hatred. Each exhibits vilification and detestation of an identifiable group in the starkest terms possible, but it apparently wasn’t enough for the Democrats to dispel from its ranks someone directly associated with it. Even NOI’s bizarre associations with genuine white supremacists like the American Nazi Party and the Ku Klux Klan wasn’t enough.

The GOP’s apparent showing of solidarity behind Stephen Miller was commendable considering its rich history of throwing colleagues under the Democratic bus. For the GOP to give the Democrat–media axis pause the next time they coordinate on character assassination, however — and, more importantly, to stymie their campaign to stigmatize perfectly sensible immigration policies (while normalizing genuine racial nationalism elsewhere) — they will have to do more than simply keep silent. They will have to get vocal, get out in front of the narrative, and call out with confidence the Left’s hypocrisy on racial nationalism the second they see it.

Bradford H. B. is a writer and business owner living in the mid-Atlantic region.