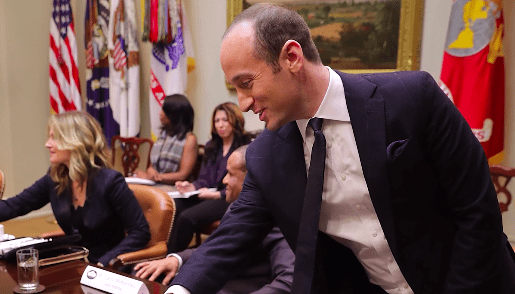 For most of its history, a wise observer once remarked, the American conservative movement has been an oxymoron: it doesn’t move anywhere and has never conserved anything. The man who made that observation died a few years ago, but not before suffering the common fate of anyone who tells the truth in America. He was denounced as a racist, banished from polite society, and “hate-listed” by the Southern Poverty Law Center (SPLC). Such is the destructive fate that liberals (and some misguided soi-disant “conservatives”) have in mind for Stephen Miller, the senior adviser to President Trump. If you are a conservative who just stumbled onto this column online, and you are too busy to read past the first paragraph, let me sum it up succinctly: Protecting Miller from this dishonest attack is as vital to the future of the Republican Party as it is to oppose the Democrats’ efforts to impeach our president.

Even his worst enemies will admit that Stephen Miller is a genius. Whatever his IQ might be, it’s almost certainly at least one standard deviation above the average of your typical Republican political strategist. Miller has an uncanny knack for spotting the key stress points in our long-running culture war and finding ways to leverage these conflicts to gain support for Trump’s “Make America Great Again” agenda. It is precisely because he has been so effective that the Left has long sought a way to destroy him, and it is frankly shocking that a former writer for Breitbart News was willing to assist the president’s enemies in this project by leaking hundreds of emails to the SPLC. Before exploring the crimes of wrongthink alleged against Miller, let me first digress to ask a troubling question: What happened to Katie McHugh?

Five years ago, when she had worked for a few months at the Daily Caller after graduating from Allegheny College, McHugh was hired away onto the team at Breitbart that was rapidly being reorganized under the direction of Steve Bannon. Because I was a friend of the late Andrew Breitbart and know many current and former employees of the organization, I’m familiar with some details of the struggle to maintain morale and discipline on their team since the founder’s untimely death in 2012. The question has often been asked whether or not Andrew would approve of everything that has gone on in the organization over past seven years, but we simply cannot know, given all that has happened: Mitt Romney’s catastrophic collapse in the 2012 campaign, the disaster of Paul Ryan’s tenure as speaker of the House, the #GamerGate drama, the #BlackLivesMatter movement, the onset of censorship by social-media networks, et cetera. What we do know for certain is that Andrew was an early booster of Trump’s presidential ambitions and that Andrew also understood better than anyone on the planet how to fight against the liberal bias of the “mainstream” media.

Unfortunately, Katie McHugh became a target of what Andrew called the Democrat-Media Complex and was accused of racism because of some messages she posted to Twitter. Eventually, in 2017, McHugh was fired from Breitbart and has since been “turned” (to use an espionage term) into an agent of the anti-Trump machine. Although she was once perhaps even more of an “far-right extremist” than me (which is nearly impossible), McHugh has since thrown under the bus nearly all of her former friends, divulging to the SPLC and liberal journalists her private communications not only with Miller, but also with various conservative activists and media professionals. The way McHugh was “turned” is a textbook example of how the Left operates to subvert conservative organizations and, because her former friends include so many friends of mine, I would be tempted to hate her, except for Christ’s commandment that we should love our enemies. But I digress.

It was Stephen Miller’s misfortune to have trusted Katie McHugh, thereby inadvertently exposing himself to the notoriously merciless smear machine that is the Southern Poverty Law Center. A friend of mine who was once targeted by the SPLC described their standard tactic as the “Ransom Note Method” of character assassination. The SPLC’s team of professional smear artists will cut and paste together bits and pieces of the targeted person’s writing — half a sentence here, a few phrases there, never so much as an entire paragraph — interconnected by tendentious descriptions (“radical … hateful … notorious”) to create a mosaic verbal assemblage that portrays the target as the monstrous latter-day spiritual descendant of Julius Streicher. Add in some clever guilt-by-association and, perhaps, some outright libel, and the SPLC experts can so demonize its targets that their own mothers might be tempted to denounce them. Until it happens to you or to someone you know, it’s impossible to understand the vast chasm that often separates the hatefully distorted image manufactured by the SPLC and the actual human being “profiled” by such methods.

Consider, for example, the case of the late Sam Francis (the “wise observer” cited in my opening paragraph). Sam was a brilliant scholar, former Senate staffer, Heritage Foundation associate, and award-winning editorial writer who, among other accomplishments, wrote a 1981 treatise entitled The Soviet Strategy of Terror that had an enormous influence on the Reagan administration’s Cold War policies.

It was Sam’s misfortune, however, to make too many enemies among the neoconservative wing of the GOP coalition and, when he spoke at a conference hosted by the race-focused publication American Renaissance (about which more later), Sam’s enemies turned him into one of those “unmentionables,” a non-person whose work could not be cited by anyone who aspired to influence within the conservative movement. A cone of silence descended around Sam, with whom I had a few conversations at various D.C.-area events we both covered during the years before his 2005 death. As with so many similar cases (e.g., former National Review columnist John Derbyshire), Sam Francis’s years of valuable contributions to the conservative cause counted for nothing when he was accused of wrongthink on race-related issues and then refused to apologize or to repudiate his friends.

Even if we stipulate that Sam’s opinions were, on some matters, impossible for any Republican official to defend, he was a journalist not a politician. There are plenty of liberal journalists whose personal opinions on sundry issues might offend a majority of Americans, but when was any New York Times columnist fired because he said something that made him a liability to the Democratic Party? And, as Michael Brendan Dougherty has persuasively argued, Sam Francis’s writing in the 1990s has been amply vindicated by subsequent events. He was verily a prophet, who quite nearly predicted the rise of Trump Nation (except that he never named Trump as the man who would make it happen).

The Sam Francis whom I knew bore no resemblance to the monstrous ogre of racial hatred portrayed by his enemies, and although I’ve never met Stephen Miller I’ll bet he isn’t what the SPLC smear machine would have you believe him to be. What is Miller guilty of? Reading the 21st-century American equivalent of samizdat, the forbidden underground literature that circulated in Warsaw Pact countries during the Soviet era. Among the items Miller recommended in emails to Katie McHugh were articles from American Renaissance, whose publisher, Jared Taylor, has spent the past 25 years covering racial issues from a perspective diametrically opposed to that of the New York Times, CNN, NBC, ABC, et al. Say what you will of Taylor’s opinions, when it comes to finding facts that contradict the liberal narrative on race, he is without equal. Many years ago, Taylor spent an hour debating racial issues on national television with Phil Donahue and by all accounts annihilated the liberal talk-show host. So if Miller was trying to help McHugh cover these issues at Breitbart in a way that served as a true alternative to the “mainstream” media, it’s not surprising that he would find American Renaissance a useful resource for that purpose.

The SPLC, of course, has used McHugh’s emails as a means of making the case that Stephen Miller is a toxic “white nationalist,” which is a phrase liberals have recently popularized after they spent so many decades calling Republicans “racist” as to deprive that word of any useful meaning. Your favorite TV comedian? “Racist”! Hallmark Channel movies? “Racist”! Everybody and everything is now “racist,” so in order to smear Republicans (which is the only thing the SPLC seems to do nowadays) they had to up the ante with “white nationalist,” meant to make you think that the person so described is a dangerous crypto-Nazi terrorist. Given that Stephen Miller is Jewish, no sane person could take this implicit accusation seriously, but liberals these days have been driven so crazy by Trump Derangement Syndrome that they’ll believe any smear, as long as it’s an anti-Trump smear.

My source closest to the White House assures me that, despite the vilification campaign against Miller, it’s unlikely he’ll be fired. “Trump likes him, so he’s safe,” said my source, who intimated that the president’s son-in-law Jared Kushner is less favorable to Miller, but Trump is personally protecting his adviser from any fainthearts in his administration who might want to oust Miller. Still, it would certainly help if rank-and-file conservatives would speak out in Miller’s defense. Too often in Republican history, liberals have been allowed to exercise a heckler’s veto over GOP personnel, and President Trump deserves praise for standing strong against this SPLC smear against Miller.