China Watch China,Detente,Richard Nixon,Ronald Reagan,Taiwan Niall Ferguson: One Cheer for Detente - The American Spectator | USA News and Politics
Menu
China Watch
Niall Ferguson: One Cheer for Detente
Detente in Joe Biden’s hands will only bring back Jimmy Carter — against a much stronger power than the USSR was.
by Francis P. Sempa
Joe Biden and Xi Jinping in 2011, when they were still vice presidents (Wikimedia Commons) 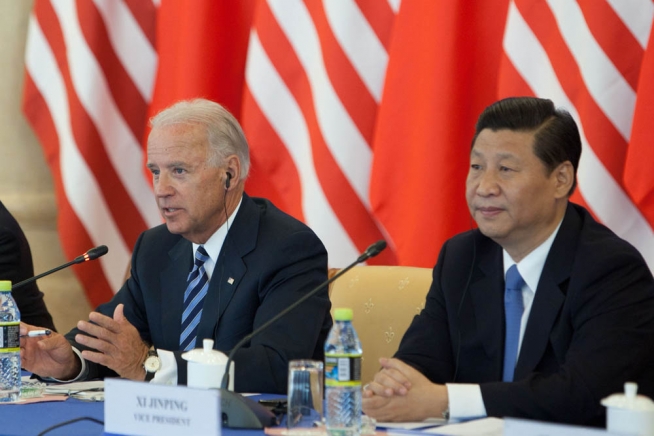 The prolific British historian Niall Ferguson has written a provocative article for Bloomberg in which he recommends that the Biden administration practice detente with China as a means to avoid war over Taiwan. Ferguson, who is busy writing the second volume of his biography of Henry Kissinger, sees detente with the Soviet Union in the 1970s as practiced by President Richard Nixon and Kissinger, who served as National Security Adviser (and later Secretary of State), as a model for the Biden administration’s policy toward China. Ferguson could not be more wrong.

Ferguson believes that detente gets a bad rap. Neoconservatives and supporters of Ronald Reagan, he writes, argued that it was a “misconceived strategy that mainly benefited the Soviet Union and that Reagan was right to ditch it in favor of a more confrontational strategy.” Ferguson contends that Reagan did his own version of detente with Gorbachev and that version of detente ended the Cold War. Kissinger in the third volume of his memoirs Years of Renewal argued that it was Nixon’s policies in the 1970s that set the stage for Reagan’s policies in the 1980s that won the Cold War.

Ferguson rightly contends that detente in the 1970s was not equivalent to the West’s appeasement in the 1930s, as many of detente’s opponents claimed at the time. Nixon and Kissinger practiced a hardheaded version of détente, in Ferguson’s words, “to avoid World War III and to play for time, exploring the possibilities of an increasingly multipolar, interdependent world.” And Nixon’s detente was pursued in the context of triangular diplomacy with the Soviet Union and China. Nixon and Kissinger positioned the United States to have better relations with each of the Eurasian communist giants than they had with each other. They exploited the Sino-Soviet split to the benefit of American foreign policy interests. Ferguson implies that Biden could do the same thing today.

Biden, Ferguson writes, instead of talking tough on Taiwan, should end the trade war with China, use China’s help to end the war in Ukraine, and work with China to pressure Arab oil producers to significantly increase production. But this presupposes that China is open to real detente with the United States. Ferguson’s evidence in that regard, however, is quite thin: he claims that China’s COVID protocols are Xi Jinping’s version of the Cultural Revolution and are “destabilizing China”; that China’s support for Putin in the Ukraine war has weakened China’s international position; and China recently failed to achieve a Pacific trade and security agreement with countries in the region.

Meanwhile, China has stepped up its military incursions into Taiwan’s defense space, continues its conventional and nuclear build-up, and has not backed-off from its geopolitical offensive known as the Belt and Road Initiative. Moreover, China shows no signs of lessening its support for Russia or walking back its statement that the Sino-Russian partnership is “without limits.” And the Biden administration shows no inclination or ability to replicate the triangular diplomacy of Nixon-Kissinger.

Ferguson writes that Biden is “deeply committed to the containment of China as the keystone of its foreign policy.” But that is a misreading of Secretary of State Antony Blinken’s recent foreign policy speech in which he expressly renounced containment in favor of engagement and competition — the very same policy that every post-Cold War administration (except Trump’s) — followed to the detriment of U.S. national security interests.

And there is one more important difference between the Nixon-Kissinger version of detente and Ferguson’s proposed version for today — China is a much more powerful challenger today than the Soviet Union was in the 1970s, especially in the economic realm. Ronald Reagan was able to win the Cold War because he knew — and said — that the Soviet economy was in crisis and could not sustain a strong challenge from the United States and the West (in alliance with China) in the 1980s. And America’s economic situation in the mid-to-late 1980s was relatively much stronger vis-à-vis the Soviets than it is today vis-à-vis China.

Ferguson rightly argues that Biden’s grand strategy is “deeply flawed.” But so is Ferguson’s proposed grand strategy of detente. Ferguson favors detente with China over a war with China over Taiwan, as if somehow we are faced only with that stark choice. Perhaps he forgets that it was Reagan’s confrontational approach to the Soviet Union — called “peace through strength” — that set the stage for the Reagan-Gorbachev detente that ended the Cold War.

Finally, Ferguson seems unconcerned that a Biden detente, instead of replicating the hardheaded Nixon-Kissinger version, might look more like the flaccid Jimmy Carter detente that convinced the Soviets that the “correlation of forces” had shifted in their favor. Carter’s weakness emboldened the Soviets, just as Biden’s weakness thus far has emboldened China. If we have learned anything from the 1970s it is that the value of detente depends on the skill of its practitioners.