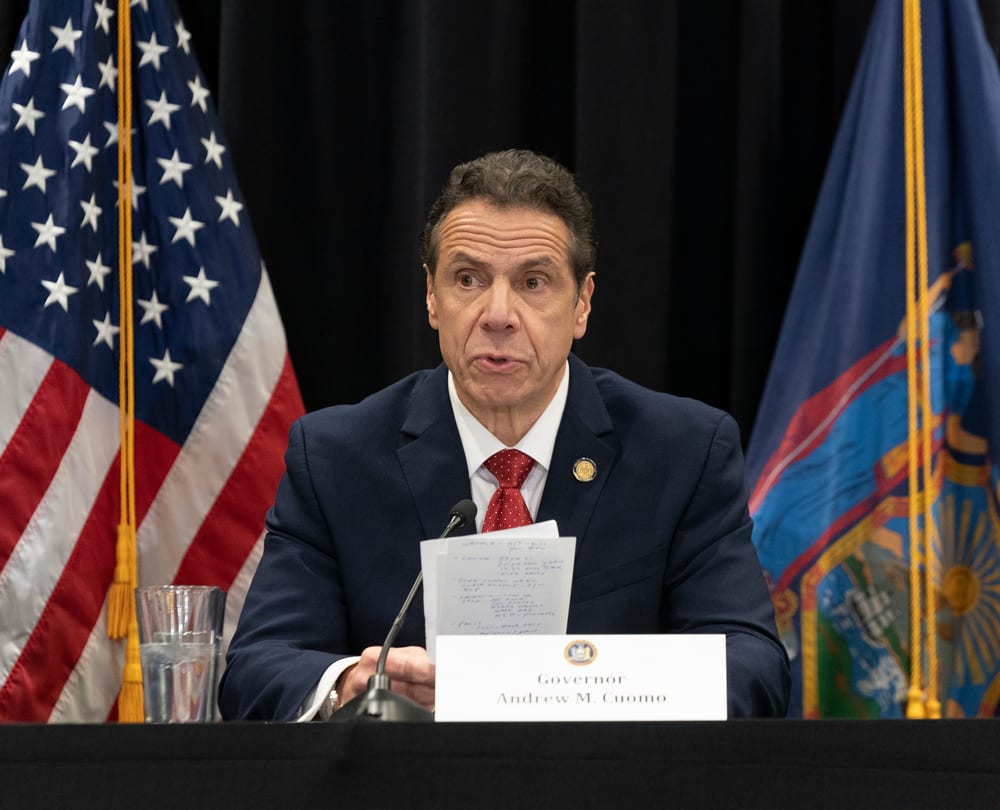 On March 2, the day after New York reported its first coronavirus case, Gov. Andrew Cuomo appeared on CNN, where he declared that he was “mobilizing the public health system to contain the spread.” In an interview with CNN’s John Berman, the Democratic governor said his state was “ramping up our testing capacity,” but assured viewers that “we have no reason for concern” that the COVID-19 patient, a 39-year-old woman who had just returned from Iran, had spread the virus to anyone else in New York. Cuomo added, “What I am concerned about, if anything, more than a health issue, is the perception issue and the fear issue. I understand diligence and I understand anxiety and let’s do everything we can. But you can’t allow the fear to outpace reality, right?”

The grim reality of New York’s coronavirus outbreak soon outpaced the worst fears anyone might have imagined in early March. By mid-April, Cuomo’s state was reporting as many as a thousand deaths a day, mostly in New York City and its suburbs, with the city’s pandemic also driving up the death tolls in neighboring New Jersey and Connecticut. By late May, those three states accounted for 45 percent of all U.S. coronavirus deaths. Furthermore, as the New York Times reported May 7, researchers found that “the city became the primary source of new infections in the United States,” as infected New Yorkers fled their disease-riddled city by the thousands, ignited COVID-19 “outbreaks in Louisiana, Texas, Arizona and as far away as the West Coast.”

Hindsight is 20/20, but many in the major media (including CNN, which employs the New York governor’s brother) have sought to distort public perception of what went wrong with America’s response to the Chinese virus. Liberal journalists have devoted enormous effort to blaming President Trump for this catastrophe, and this anti-Trump bias obscures the unique role that Democrat-controlled New York played in the deadly pandemic.

One of the favorite “gotcha” games played by the partisan press has been citing Trump’s optimistic quotes from January and February, when little was known about the disease that emerged from the Chinese city of Wuhan. “We have it totally under control,” the president said on January 22, after the first U.S. coronavirus case was identified in a man who had recently traveled from Wuhan. Nearly three weeks later, on February 13, Trump said in an interview with Geraldo Rivera, “In our country, we only have, basically, twelve cases and most of those people are recovering and some cases fully recovered.” In hindsight, quotes like this seem naïvely optimistic, but they were factually accurate at the time. What the anti-Trump media omit from their hindsight blame-game narrative is that many Democrats, including Cuomo and New York City Mayor Bill de Blasio, were saying very similar things about COVID-19 at the time, and they continued downplaying the danger of the virus even as the pandemic took New York in its deadly grasp. 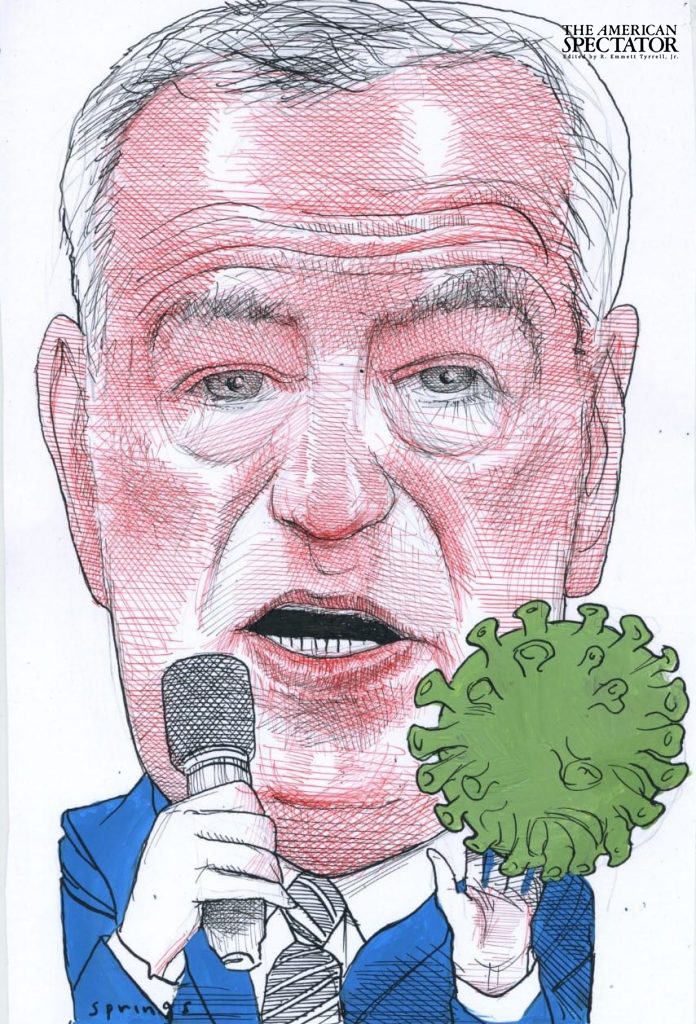 De Blasio was particularly clueless. In February, the mayor’s administration seemed most concerned that fear of the virus would reduce attendance at the city’s annual Lunar New Year celebration in Chinatown. “New Yorkers should go about our lives, continue doing what we do,” de Blasio declared on February 2. The city’s health commissioner, Dr. Oxiris Barbot, took to Twitter the same day with this proclamation: “As we gear up to celebrate the Lunar New Year in NYC, I want to assure New Yorkers that there is no reason for anyone to change their holiday plans, avoid the subway, or certain parts of the city because of coronavirus.” Three days later, Dr. Barbot was back on Twitter: “Today our city is celebrating the Lunar New Year parade in Chinatown, a beautiful cultural tradition with a rich history in our city. I want to remind everyone to enjoy the parade and not change any plans due to misinformation spreading about coronavirus.”

Cuomo and de Blasio could be forgiven for their mistaken optimism, if the media would extend the same mercy toward Trump and other Republicans who were similarly sanguine in the early days of the COVID-19 outbreak.

Anyone in New York taking their cues from City Hall in February would have believed that “misinformation” was more dangerous than the virus itself, and this message continued to be reiterated for weeks. On February 13, for example, MSNBC’s “Morning Joe” program featured an interview with de Blasio in which he praised the “extraordinary public health apparatus here in New York City” and said concerns about the disease “should not stop [city residents] from going about your life. It should not stop you from going to Chinatown and going out to eat.” In a March 2 press conference, Cuomo said “anxiety” over the pandemic was unnecessary because “once you know the facts, once you know the reality, it is reassuring.” The governor confidently boasted, “Excuse our arrogance as New Yorkers — I speak for the mayor also on this one — we think we have the best health care system on the planet right here in New York. So, when you’re saying, what happened in other countries versus what happened here, we don’t even think it’s going to be as bad as it was in other countries.”

Cuomo and de Blasio could be forgiven for their mistaken optimism, if the media would extend the same mercy toward Trump and other Republicans who were similarly sanguine in the early days of the COVID-19 outbreak. But the partisan bias of the press corps has never been so transparent as it was in the way anti- Trump journalists scapegoated the president for the pandemic, even as they elevated Cuomo to a status of secular sainthood. While cable-news talking heads were genuflecting at the altar of Saint Andrew of Albany, however, the governor was in fact implementing policies that resulted in thousands of unnecessary deaths. In a directive issued March 23, when New York’s cumulative death toll from the virus had not yet reached three hundred, Cuomo’s administration prohibited nursing homes from refusing admission to patients who had been diagnosed with COVID-19. This inexplicably wrongheaded policy resulted in spreading the virus widely among New York’s most vulnerable population, and more than five thousand patients in the state’s senior-care facilities died. 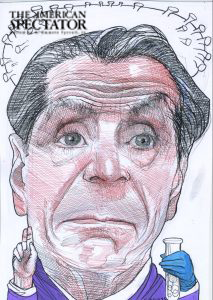 The same media outlets that ignored the blunders in New York — scene of the deadliest outbreak in America — were quick to warn of disaster when Republican governors in states like Georgia, Florida, and Texas moved to end their coronavirus lockdowns. Yet the per-capita COVID-19 death rates in those states were a fraction of the rate in Cuomo’s New York: 88 percent lower in Gov. Brian Kemp’s Georgia, 94 percent lower in Gov. Ron DeSantis’s Florida, and 97 percent lower in Gov. Greg Abbott’s Texas. Notably, all of those GOP governors pursued policies to keep coronavirus patients out of nursing homes, the direct opposite of Cuomo’s fatal policy.

“Excuse our arrogance as New Yorkers,” Cuomo said. But now that his arrogance has been exposed as a deadly conceit, is it so easy to excuse him? And what about the people who elected Cuomo? New York is dominated by Democrats, who control twenty-two of the state’s twenty-seven seats in the U.S. House; both of the state’s U.S. senators have been Democrats since 1999, when Al D’Amato left office, and New Yorkers haven’t elected a Republican governor since George Pataki won his third term in 2002. New York is effectively a one-party state, which means that Cuomo and other Democrats are unlikely to pay a political price for their failures, but the rest of the country has been forced to suffer the consequences. New York owes America an apology. We won’t be holding our breath while we wait for it.