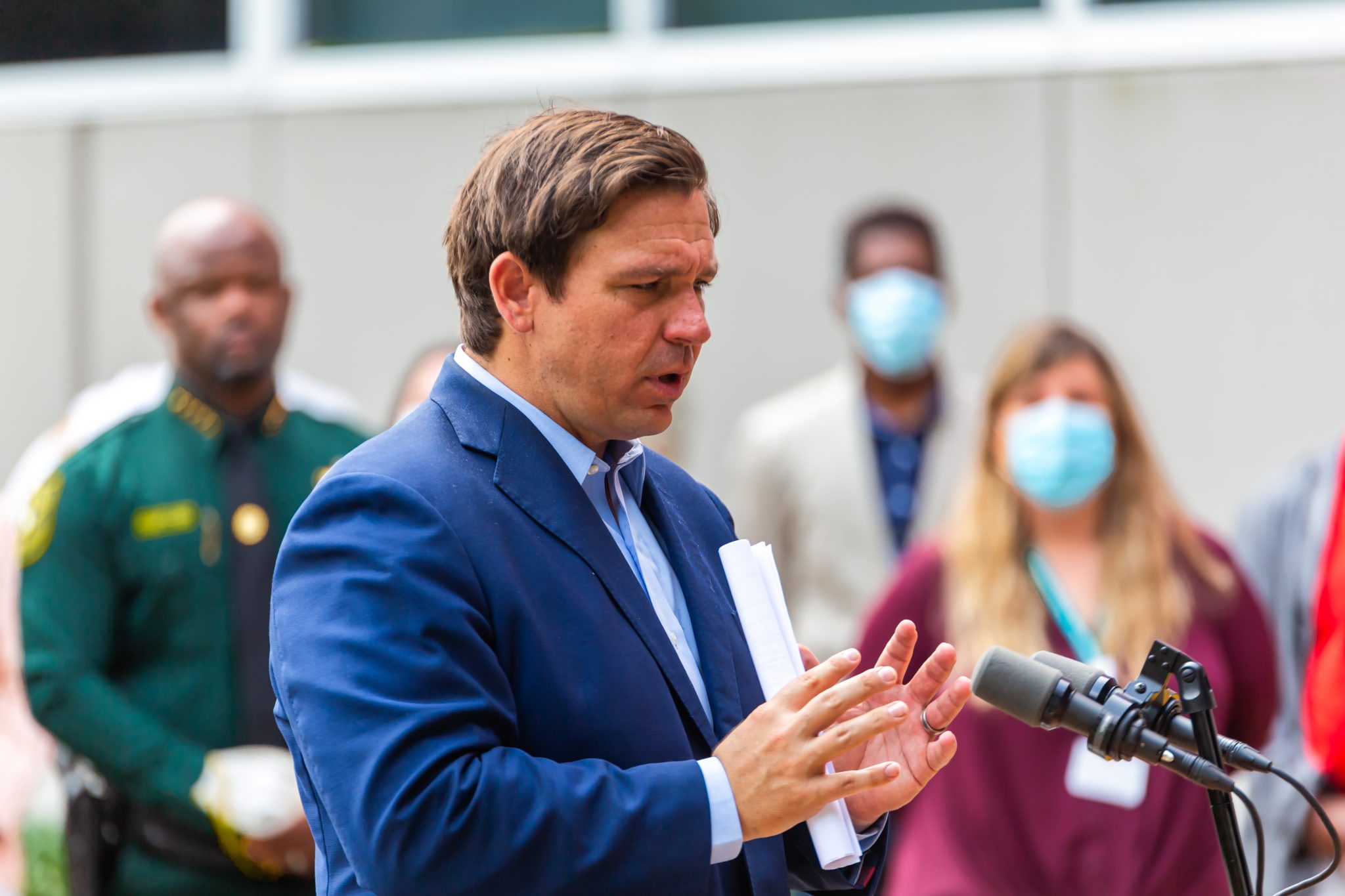 Last week, the Florida National Guard offered free COVID-19 testing in Collier County, but they weren’t overwhelmed with panic-stricken residents seeking tests. Located on the state’s southwest coast, Collier has not been a viral hotspot, and there seems to be little danger of a major outbreak there. With a population of about 385,000, the county has reported 1,334 coronavirus infections since March. Only 178 of those cases required hospitalization, and as of Wednesday, the county had recorded 46 deaths from the disease. The worst problem for local residents was when Naples reopened its beaches earlier this month, prompting an influx of “out-of-towners,” including residents from the Miami area, which has the highest COVID-19 rate in the state and where beaches are still closed.

Invoking the authority of “experts” has become habitual in the media’s partisan warfare over the coronavirus. Their objectives are (a) the promotion of irrational fear and (b) blaming Trump and other Republicans.

Overall, Florida has been one of the safest states in the country during this pandemic, confounding all the media “experts,” whose dire predictions for the Sunshine State have failed to materialize. For a couple of weeks in late March, Florida Gov. Ron DeSantis was incessantly denounced in the media because he was reluctant to issue a statewide “stay-at-home” order. DeSantis’s argument was that the state’s outbreak was largely confined to three counties — Miami-Dade, Palm Beach, and Broward — on Florida’s southeast coast. Local officials were implementing their own lockdown policies to contain these outbreaks, while state officials were concentrating their efforts on ensuring that Florida’s elderly population was protected from the virus. Given these circumstances, shutting down all “nonessential” business statewide was not necessary, DeSantis argued.

Pressure from the media, however, proved insurmountable, and finally on April 1 —  amid reports that President Trump himself had intervened — DeSantis announced a statewide lockdown order. Whether or not that made any difference in the trajectory of the COVID-19 outbreak is disputable; several analysts have questioned the effectiveness of lockdown policies. For example, after analyzing data from 17 European countries, Elaine He at Bloomberg concluded that “the relative strictness of a country’s containment measures had little bearing” on the coronavirus death rate. Marko Kolanovic of JP Morgan crunched the numbers and found that infection rates actually declined after stay-at-home orders ended, indicating that the pandemic had “its own dynamics unrelated to often inconsistent lockdown measures that were being implemented.” Even if you don’t share that skeptical view, however, is there any real science that justifies imposing lockdown orders everywhere, on a one-size-fits-all basis?

Because my oldest daughter lives in Collier County, I’ve followed the situation in Florida closely, and I’ve been dismayed by the unwillingness of the media to acknowledge the success of DeSantis’s policies. It is obvious that politics, rather than science, was the basis of this animosity. The governor is not only a Republican, but a close ally of Trump, whose endorsement helped DeSantis win the 2018 GOP gubernatorial primary against Adam Putnam. Because this is a presidential election year and Florida is a crucial swing state, it served the partisan interests of the anti-Trump media establishment to treat DeSantis as a villain. In a March 23 appearance on MSNBC’s Morning Joe program, for example, Mike Barnicle declared:

Joe, if you talk to a lot of experts — I was fortunate enough to spend most of Friday afternoon around one of the greatest hospitals in the world, Brigham and Women’s here in Boston — you find out their view of what they’re looking at and what they’re dealing with every day. And in the case of Governor DeSantis of Florida, he’s going exactly the opposite way from what the experts, the people on the front lines, indicate ought to be done. The first thing we need is the fact-based truth from public officials. That’s what they will tell you. You get it here in Massachusetts from Charlie Baker, you’re getting it from Andrew Cuomo in New York, Gavin Newsom in California, the governors of Illinois and Michigan, and you’re getting fact-based truth.

Invoking the authority of “experts” this way has become habitual in the media’s partisan warfare over the coronavirus. Their objectives are (a) the promotion of irrational fear and (b) blaming Trump and other Republicans. In this view, Democrats possess a monopoly on “fact-based truth,” with scientific expertise unanimously in favor of what I’ve called the Cult of Eternal Lockdown. In addition to their one-size-fits-all prejudice — everyone must be placed under government-imposed quarantine, regardless of local conditions — the lockdown cult also exhibits a more-lockdown-is-better attitude toward virus containment. The earlier a community went into lockdown mode, the better; the more stringent the prohibitions against “nonessential” activities, the better; and the longer these measures are continued, the better.

That such beliefs have nothing to do with science can be easily demonstrated by actual data, but what’s important to understand is that the media institutions promoting this belief system are motivated entirely by politics. Why else would Barnicle have demonized DeSantis while heaping praise on such Democratic politicians as New York Gov. Andrew Cuomo or Michigan Gov. Gretchen Whitmer? Anyone can consult the state-by-state breakdown of COVID-19 statistics and see for themselves which of these governors has done best in coping with this pandemic. Florida’s per-capita death rate from the coronavirus is 93 percent lower than New York’s and 80 percent lower than Michigan’s. If “fact-based truth” really matters, why hasn’t Mike Barnicle apologized for his dishonest smear of Ron DeSantis?

Beyond partisan politics, however, there is another aspect of the media’s Cult of Eternal Lockdown that deserves critical scrutiny — namely, selfishness. Having consecrated themselves as a sort of High Priesthood, claiming authority to lecture the rest of us about science, Barnicle and others in the media pretend to possess a moral and intellectual superiority to others. The media insinuate that those evil Republican governors who want to reopen their states’ economies are servants of corporate greed. But the interests of gigantic corporations (including Comcast, the multibillion-dollar conglomerate that owns MSNBC) have been less affected by lockdown policies than have small businesses and service-industry workers. Lockdown orders have never prevented anyone from shopping at Walmart or Costco, but your local tavern or hair salon? Those are “nonessential” businesses, according to the High Priests of the Cult of Eternal Lockdown.

Media millionaires with TV contracts seem indifferent to the plight of out-of-work beauticians and waitresses. No matter what the actual “fact-based truth” about the coronavirus pandemic might be, TV pundits insist that anyone in favor of ending the lockdowns is advocating mass suicide. So if you watched MSNBC or CNN this week, you could see talking heads tut-tutting over video clips of crowds enjoying the sunshine on Florida beaches over Memorial Day weekend. On Fox News, meanwhile, Tucker Carlson lit into those media hypocrites:

For reasons that no one in authority has ever really explained, cable news yappers have been classified as essential workers from the very first day of lockdown.… They didn’t lose their jobs. They have not been quarantined. If anything, they are thriving in the midst of this disaster. They feel more essential than they ever have. Your suffering has been the best thing to happen to them since impeachment, when they got to spend a full month pretending to know where Ukraine is. So, you can imagine their rage when they saw you outdoors this weekend, enjoying time with your family. The fact that you disobeyed them drove them insane.

Carlson cited chyrons by which CNN conveyed their fear-mongering attitude, such as “Memorial Day Crowds Spark Fear of New Outbreaks” and “Americans Flock To Public Places As Death Toll Nears 100,000.” Are such fears justified? Will those “new outbreaks” actually happen? Your guess is as good as mine, but given the past record of such media predictions, skepticism is certainly justified.

Two months ago, while Mike Barnicle was denouncing Ron DeSantis on MSNBC, the chyron onscreen was “Breaking News: Florida Sees Coronavirus Cases Top 1,000 Over the Weekend.” At that point, Florida’s outbreak was running ahead of the numbers in Massachusetts, where Barnicle was getting advice from “experts.” Such expertise, however, apparently did not stop the spread of COVID-19 in Massachusetts, which as of Thursday had reported a cumulative 94,895 cases and 6,640 deaths from the virus. The coronavirus death rate in Massachusetts is 950 per million residents, and the state reported 74 new deaths just Wednesday. What about Florida? Their per-capita COVID-19 death toll is 89 percent lower than in Massachusetts; Florida reported 45 new deaths Thursday, more than half of those in the three-county area of Miami-Dade, Palm Beach, and Broward.

People dying from a virus is not good news, of course, but the fact that Florida’s COVID-19 death rate is so much lower than states like New York, Massachusetts, and Michigan deserves some acknowledgement. The anti-Trump media decided two months ago to make a villain out of Ron DeSantis, however, and it seems that no “fact-based truth” will ever change their minds.