Like all of you, my workday ends with a sense of relief rather than a laugh, but last night was different. During my recap of current news I came upon a photo I found hilarious: 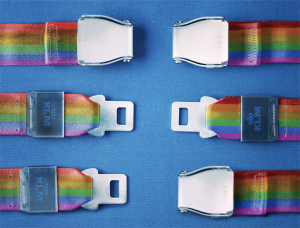 The advertising guys at KLM Royal Dutch Airlines released an image of three sets of rainbow flag-inspired seat belts with the tag line, “It doesn’t matter who you click with.” The slogan was followed by the hashtag, Happy #PrideAmsterdam.

It’s a play on words. “Click” as in “hook-up.” And airplane seat belts make a clicking sound when you strap yourself in. Get it? Get it? It’s cute, right?

Now, look at the graphic again, because we’re going to play that old kid’s game, “What’s Wrong With This Picture?” To get all gender binary for a moment (I think that’s the trendy phrase — please correct me if I got this wrong), the two female-on-female seat belts and the two male-on-male seat belts won’t click. They’re not secure. They won’t keep you safely buckled in. In other words, they don’t work. The only seat belt of the three shown in the ad that is secure, safe, and fully functional is the traditional belt with both male and female components. That one will actually click.

A related news item comes to us from the Mother Country, dear old England. In Britain, the National Trust is the organization that preserves hundreds of historic sites across the country. It enjoys an international, and well-deserved, reputation as one of the world’s finest preservation societies. This year marks the 50th anniversary of the decriminalization of homosexuality in Britain. To mark the occasion, the National Trust introduced a program entitled “Prejudice and Pride.” (Get it? It’s like the Jane Austen novel! Only backward.) Volunteers and employees were required to wear either a rainbow flag badge or a rainbow flag lanyard. Some of the volunteers at Felbrigg Hall in Norfolk objected to the requirement (we’ll get to their reason in a moment), and were informed that if they would not wear the rainbow flag gear, they would be assigned to work out of the public eye. In other words, during a program that celebrates when it became safe for British homosexuals to come out of the closet, British straight people who had reservations about the program were told to get into the closet.

Now, about the KLM ad, the Twitter-verse was quick to notice the unintentional hilarity. One Twitter user posted, “You can use any combination you want. But only one is actually going to work.” Another said, “Uh, guys. This gives the opposite message from what you were going for.”

DNA Magazine reports KLM’s humorless response to their ad that backfired. “The statement we made with the image showing rainbow-coloured safety belts is simply a metaphor that celebrates diversity,” wrote KLM spokesperson Koen van Zijl in a statement sent to Fox News. “Safety for all passengers remains our primary priority. All passengers are required to use standard safety belts on KLM flights.”

Good to know. Now, any update on the creative team that made KLM look silly?

The National Trust’s “Prejudice and Pride” program is another well-intentioned idea that went awry. First off, the day Britain decriminalized homosexuality was indeed a significant moment, especially when we recall that even in the 20th century English homosexuals were imprisoned, or locked away in psychiatric hospitals, or were court-ordered to take medications to “cure” them.

Arguably the most famous modern victim of these laws was Alan Turing, a brilliant mathematician, a pioneer in computer science and artificial intelligence, and a cryptographer who, during World War II, cracked the Enigma code, the cipher machine the Nazi military used to encrypt communications. For his work, Turing was created an officer in the Order of the British Empire. But in 1952 Turing was arrested and convicted of “gross indecency,” in other words, homosexuality activity, and sentenced to twelve months of hormone “treatments.” He was also banned from working as a code-breaker for the British government. Two years later Turing was found dead of a cyanide overdose. It’s not going too far to say that Britain’s anti-homosexual legislation drove him to his death.

The more than 75 refusenik volunteers at Felbrigg Hall did not object to the legalization of homosexuality, they were protesting a short film the National Trust had commissioned for Felbrigg Hall in which it is revealed that the last squire of the Hall, Robert Wyndham Ketton-Cremer, was gay. Some of these volunteers had known Wyndham Ketton-Cremer, and they stated that he never disclosed his sexuality. This assertion was backed up by two of Wyndham Ketton-Cremer’s godsons. Ted Coryton told the Daily Telegraph, “I feel the National Trust is using this campaign to market their houses. It is despicable. [My godfather] gave them his family home and they should respect his right to privacy.” Coryton was joined by another godson, Tristram Powell, who said, “His sexuality was incidental and scarcely headline material. The ‘outing’ of him by the Trust for its own commercial reasons feels mean-spirited.”

Annabel Smith, head of volunteering and participation development at the Trust, told the Independent, “As part of Prejudice and Pride we have worked closely with Stonewall and the University of Leicester who have been providing training and support to help as many volunteers as possible feel confident to take part.”

It’s a job requirement among bureaucrats never to address the issue at hand, and obviously, Ms. Smith has a gift for misdirection. The protest at Felbrigg Hall is not about participation in a program, it’s about respect for a man’s privacy. But apparently to the folks at Stonewall and the University of Leicester and the National Trust, the wishes of a generous donor carry no weight compared to advancing the agenda du jour.

Yet the outcry, not only at the Hall and among Wyndham Ketton-Cremer’s family, but also across the country, has forced the National Trust to do a U-turn. The Trust’s newest statement reads, “We are aware that some volunteers had conflicting personal opinions about wearing the rainbow lanyards and badges…. We are therefore making it clear to volunteers that the wearing of the badge is optional and a personal decision.”

Good for you, National Trust. Now, how about an apology to the family for betraying the squire’s trust?