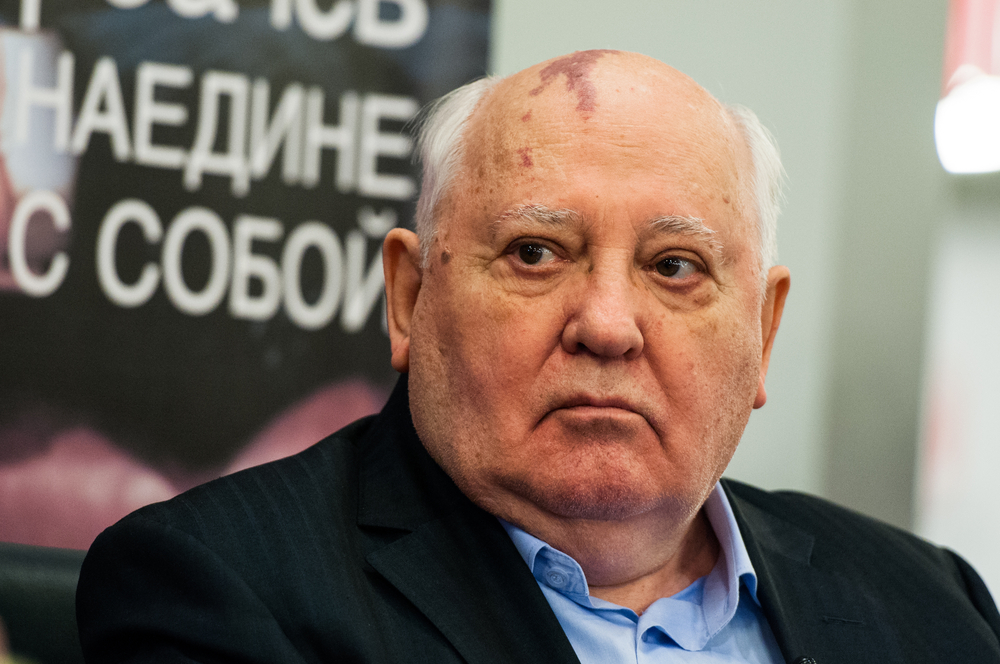 When I heard about the death of Mikhail Gorbachev, I sighed. He was one of the final remaining pivotal figures in the end of the Cold War: Gorbachev, Ronald Reagan, Pope John Paul II, Margaret Thatcher, Václav Havel, Boris Yeltsin, and Lech Wałęsa. Only Wałęsa remains. Gorbachev was 91 years old; he lived much longer than many expected. It’s a historic loss.

I sighed for an added reason. I have written so much about Gorbachev, in so many articles and books, that it’s impossible to try to sum up the man’s life and legacy. Where to begin?

It’s a daunting task, but I think I can add two worthwhile things that others will ignore or get wrong in their tributes to Gorbachev.

First, most of the world will focus on Gorbachev’s role in the collapse of the USSR and invoke him as the hero of Soviet disintegration. The truth is not so tidy. In reality, Gorbachev’s goal all along was to preserve the USSR. Unlike Ronald Reagan, whose goal was to break up the Soviet Union, Gorbachev tried to keep it together, so much so that he repeatedly used force in several Soviet republics (including the Baltic states) in his final years in power.

To his credit, Gorbachev wanted a kinder, gentler, non-totalitarian Soviet Union, even a politically pluralistic one. In February 1990, he formally stripped the Communist Party of the Soviet Union of its sole monopoly on political power when he repudiated Article 6 of the Soviet Constitution. That was a huge positive change, and only he had the power to enact it. But still, he strove to keep the union together. He said so publicly until the very end.

That end came, providentially, on December 25, 1991, Christmas day — a celebration that the Bolsheviks banned in the USSR. That day, Gorbachev called President George H.W. Bush to say: “You can have a very quiet Christmas evening. I am saying goodbye and shaking your hand.” He informed Bush of the inevitable, namely that he was resigning his position as head of the USSR, a country that by then effectively no longer existed because every single republic had declared independence in 1990 and 1991.

That evening, Gorbachev went on Soviet television to announce he was resigning his post. He began his December 25 resignation speech by noting that he had stood “firmly … for the preservation of the union state, the unity of the country. Events went a different way. The policy prevailed of dismembering this country and disuniting the state, with which I cannot agree.” He lamented the “breakup” of Soviet “statehood” and “the loss” of, curiously, “a great country.”

No, it should not have. As Ronald Reagan said, it was an Evil Empire, and “it was time to shut it down.” Gorbachev helped shut it down, but the way it unraveled was not what he intended. Still, he deserves credit for helping to peacefully end a Cold War that few of us would have expected to end peacefully. If you had told any of us in 1981 that by 1991 the USSR would cease to exist, we might have assumed it was annihilated in nuclear Armageddon. That nuclear nightmare never occurred, and that was a credit to Gorbachev, Reagan, John Paul II, Thatcher, and the other great leaders of the day.

Great leaders, I must add emphatically, who do not exist on the world stage right now. Joe Biden and Vladimir Putin and Pope Francis are plainly not Ronald Reagan and Mikhail Gorbachev and Pope John Paul II. We are impoverished today. We suffer badly for lack of statesmen.

The second thing that I can and must add to the matter of the life of Gorbachev is the one that matters most at this time of death: his faith. And that, too, is very complicated.

Born in March 1931, Gorbachev was secretly baptized as an infant by his mother, Maria. He later told Vatican Secretary of State Agostino Casaroli that his mother would surreptitiously remove an icon from the wall and bless him with it. Three of his grandparents were Christians.

When Reagan first met Gorbachev in Geneva in November 1985, he was immediately taken by Gorbachev’s religious references, which were plainly remarkable coming from the leader of the Evil Empire. Reagan became deeply intrigued at the possibility that Gorbachev might be (in Reagan’s words) a “closet Christian.”

When he arrived home from Geneva, Reagan immediately called Michael Deaver. He said of the new current leader of Lenin’s and Stalin’s atheistic state: “He believes.” An incredulous Deaver responded to his president and longtime friend: “Are you saying the general secretary of the Soviet Union believes in God?” Reagan walked his statement back, but only a tiny bit: “I don’t know, Mike, but I honestly think he believes in a higher power.”

Gorbachev proceeded to suggest that with his stunning overtures on behalf of religious freedom, rolling back his predecessors’ brutal “wholesale war on religion,” as Gorbachev described it. “Atheism took rather savage forms in our country,” he lamented.

It did indeed, and Gorbachev called off the war on religion.

Pope John Paul II most certainly noticed, and appreciated, Gorbachev’s glasnost. The two men respected one another and reached out to each other. In December 1989, Gorbachev became the first and only Soviet leader to visit the Vatican. Like Reagan, John Paul II was cautious, not knowing for sure if Gorbachev was privately a closet Christian. Nonetheless, the pope considered the general secretary to be a “Providential man.” He believed that God was surely working through this very different Soviet leader. “I’m sure that Providence paved the way for this meeting,” he told Gorbachev.

But did Mikhail Gorbachev believe in God?

That is a subject that perplexed not only Reagan and John Paul II but also Reagan’s son, Michael, and Reagan’s closest aide, Bill Clark. I was Clark’s biographer (and Clark was an avid reader of The American Spectator), and he and Michael Reagan and I many times discussed the subject of Gorbachev’s faith. We all tried to get answers. Michael once asked Gorbachev directly to his face if he believed in God, and was frustrated that he couldn’t get an answer. I tried to interview Gorbachev for my 2004 book God and Ronald Reagan, where I first wrote about Gorbachev’s faith. The old Leninist wanted a minimum of $10,000 for the interview (yes, seriously). Mike Reagan advised me not to pay up, given that Gorbachev was not going to tell me what I wanted to know, and given that I didn’t have that sort of cash.

A more productive outreach was initiated by Bill Clark. Clark learned of Gorbachev’s intriguing fascination with St. Francis of Assisi, which the London Telegraph reported in March 2008 when a British reporter unexpectedly happened upon the figure of Mikhail Gorbachev in apparent prayer on his knees at the tomb of St. Francis. I read the Telegraph piece and quickly emailed it to and called Clark and Mike Reagan. I immediately drafted an op-ed for Mike to review and co-author. No sooner did we finish a draft to send to Christianity Today than did Gorbachev publicly step forward to insist that he had not become Christian, declaring the Telegraph’s reports to be false, or at least premature.

Clark immediately began working the phone and his diplomatic contacts, as he had 25 years earlier as Ronald Reagan’s top aide in foreign policy. He told me that he had heard from informed “religious friends” who knew Gorbachev that “the word is that he has converted but doesn’t quite know how to talk about it or deal with it publicly.”

The reasons for Gorbachev’s reluctance would always remain a mystery. Clark, however, didn’t give up.

Clark labored with friends in Russia, notably a friar that wanted to remain anonymous, who had the connections to get to Gorbachev a rare Russian translation of the works of Saint Francis. Clark arranged to have the collection hand-delivered to the former general secretary.

Clark’s outreach proved quickly fruitful. Two weeks later, on April 24, Clark called me and told me that Gorbachev wanted to meet with him to talk about St. Francis and the Christian faith generally, something which, said Clark, “is in the process of being arranged.”

Clark and I worked together to set up that meeting, but alas, it never happened. Geography and health limitations made it overwhelming.

So, did Mikhail Gorbachev ever become a Christian? We never found out. Gorbachev took the answer to that question to the grave.

In the end, that’s the most important question. What Mikhail Gorbachev did in this world had huge consequences. But the consequences that matter most are eternal ones.

Paul Kengor
Follow Their Stories:
View More
Paul Kengor is professor of political science at Grove City College in Grove City, Pa., and senior academic fellow at the Center for Vision & Values. Dr. Kengor is author of over a dozen books, including A Pope and a President: John Paul II, Ronald Reagan, and the Extraordinary Untold Story of the 20th Century, The Politically Incorrect Guide to Communism, and Dupes: How America’s Adversaries Have Manipulated Progressives for a Century.
Most Popular
1
Crime Time
New York Attorney General Letitia James Must Resign — and Be Prosecuted for Abuse of Power
by Jeffrey Lord