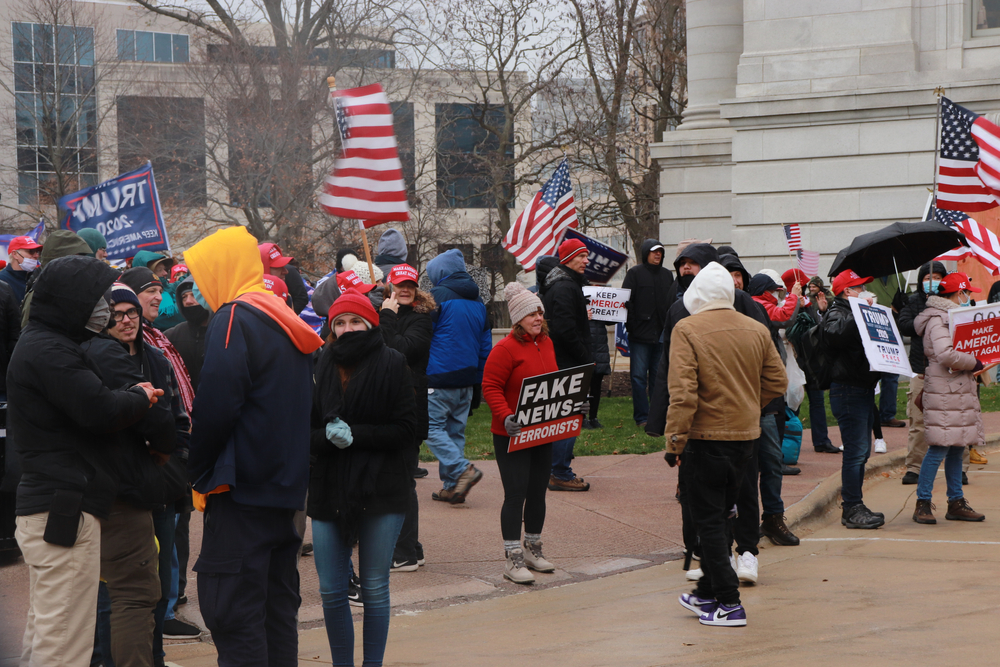 The Mainstream Media laid the groundwork blame for the D.C. rioting. Through four years they relentlessly pursued a single-minded goal: to take down the fairly-and-squarely democratically elected presidency of Donald Trump. Towards that end, they escalated non-stories into major “news” and elevated non-entities into major public figures. As they did in 2014 with the tragic crash of Malaysian Airlines Flight MH17, the plane that mysteriously disappeared mid-flight, they contorted serious news into theater and abandoned their duties to investigate honestly and report dispassionately, fairly, and responsibly.

They highlighted stories that belonged on back pages, and they blacked-out or back-paged stories that belonged above the fold on front pages. They carefully selected spokespeople aligned with their liberal-progressive ideologies as their sources for quotation, and they discarded press releases and ignored statements issued by significant voices whom they chose to blackout or blacklist.  When selecting dramatic photos to highlight stories, they chose the pictures that told their ideological narrative and censored those that depicted other realities.  Even as they mocked Kellyanne Conway for imperfectly misstating an important point she intended to convey during a “Meet the Press” interview in January 2017, they daily advanced “alternative facts.”

As a result, Americans do not have a reliable source of information. A society is imperiled when information — not opinion — is so unreliable that no one knows what to believe. In a democracy, astute citizens know they cannot rely on politicians for the truth, not even from their favorite government leaders. Even honest Congressional representatives, Senators, and Presidents regularly have to balance realities and their very consciences when they speak to the public.  A disturbing pronouncement about the economy, though honest, can jolt stock exchanges prematurely and cause sudden financial mayhem, resulting in an unintended gain or loss of millions of dollars.  Perhaps a government official — rightly or wrongly — wishes to avoid panicking the public; he or she therefore temporarily states that a perilous military development is not serious or that a looming medical catastrophe is not worrisome.  It has always been a delicate duty of leadership to manage expectations and to calm untoward fears.

Sophisticated people know they simply cannot rely primarily on their democratically elected leaders for the absolute truth. A head of government may wish to say publicly that the leader of another country is dishonest, crooked, even a murderer — and yet prudently restrains his or her tongue because that very tyrant is en route to negotiate a major treaty or other agreement whose consequences are enormous. Sometimes the politician faces challenges closer to home and perceives that he or she simply cannot fully speak one’s mind at the moment because sensitive talks are underway behind closed doors with leaders of the other party. Often compromises are reached, and each side emerges speaking of the wonderful result when, in truth, each negotiator believes a terrible deal has been cemented.

Historically, free citizens have looked to the mainstream media — the “Fourth Estate” — for the truth. They looked in France to an Émile Zola. They looked in America to a John Peter Zenger. While politicians lied and others bewailed the darkness killing democracy as news media censored truth that was fit to print, the public — particularly in free societies — looked for voices of truth among the journalists on whom they could rely. Rightly — or wrongly — Edward R. Murrow and Walter Cronkite played such roles in their times.

Something terrible happened in America these past four years, as the country divided more sharply than ever, frequently incited precisely by the media on whom the public relied for truth. CNN and MSNBC brought the serpentine likes of Michael Avenatti before the public, presenting him as someone who could be a viable candidate for the American presidency. The Mueller Investigation and the entire Russian Hoax took center stage, replacing Malaysian Airlines flight MH17 as the drama of the hour. So many could see that, ultimately, Robert Mueller’s undertaking was leading nowhere, finally justifying itself by prosecuting ancillary process crimes. And yet the investigation held center stage. Mainstream Media hurled terms like “treason” at patriots and at others without sensitivity to the gravitas of a term that properly is reserved for a Benedict Arnold and not for a disrupter.

Along the way, the social media that we all hoped at its gestation would prove to be one of humanity’s greatest boons proved instead to be yet another contributor to social discord and national division. Tens of thousands, even quite more — perhaps millions — of irresponsible private individuals found that they could create anonymous monikers and “handles,” settle themselves comfortably in a seat with laptop at hand or smartphone in hand, and tweet or re-tweet or post to Facebook their most irresponsible thoughts and utterly mendacious “facts.” An attorney named Michael Godwin popularized a “law” or “rule” that he identified with the mathematical accuracy of a Euclid or Pythagoras: when a social media discussion grows long enough, no matter how sober the topic and sophisticated the initial discussants, eventually someone in the thread will be comparing someone else in the exchange to Hitler or, more generally, the Nazis. At that point, the search for truth ends.

That is what has happened in America these past four years. Half the country do not trust Fox News, Newsmax, and One America News. The other half do not trust the Mainstream Media: ABC, CBS, NBC, CNN, MSNBC, PBS, NPR, the New York Times, the Washington Post, and other local publications like them. Online opinion publications come from perspectives that leave others across their aisles unable or unwilling to accept or even to read their differing views.

Our Mainstream Media are not as in lockstep with totalitarian governmental expectations as one might have found in Soviet outlets like Izvestia, Pravda, and the Tass news agency, or now finds in contemporary Chinese organs like Xinhua and The People’s Daily, but our Mainstream Media utterly lost their credibility and reliability these past four years, a trustworthiness on which the general public needs assurance. That is the reason that, when many sensible and responsible voices tell Americans and bring compelling supporting data that the November 2020 Presidential election was decided fairly — while other sensible and responsible voices tell Americans and offer corroborating data and meaningful circumstantial evidence that the November 2020 Presidential election was decided unfairly — half the country does not believe the other half. Half are certain that the election’s results are as unequivocal as were landslides like those of 1964 (LBJ-Goldwater) and 1972 (Nixon-McGovern). And half are as disbelieving now as many were in 2000 (Bush-Gore).

The Mainstream Media and social media oligarchs are to blame for laying the groundwork the D.C. rioting now arising from a sincerely held belief by nearly half the country that the election was stolen in November. If the media had been doing their jobs in the responsible, dispassionate, balanced, investigative way that American societies of the past had come to expect, then today Americans would hear their reports on the November election and, for the most part, would accept the journalism and the narrative. The tragedy is that we now are a country of “alternative facts.” No one knows whom to believe — and there are virtually none in America who have earned the trust that makes a greater society functional.

Dov Fischer
Follow Their Stories:
View More
Rabbi Dov Fischer, Esq., a high-stakes litigation attorney of more than twenty-five years and an adjunct professor of law of more than fifteen years, is rabbi of Young Israel of Orange County, California. His legal career has included serving as Chief Articles Editor of UCLA Law Review, clerking for the Hon. Danny J. Boggs in the United States Court of Appeals for the Sixth Circuit, and then litigating at three of America’s most prominent law firms: JonesDay, Akin Gump, and Baker & Hostetler. In his rabbinical career, Rabbi Fischer has served several terms on the Executive Committee of the Rabbinical Council of America, is Senior Rabbinic Fellow at the Coalition for Jewish Values, has been Vice President of Zionist Organization of America, and has served on regional boards of the American Jewish Committee, B’nai Brith Hillel, and several others. His writings on contemporary political issues have appeared over the years in the Wall Street Journal, the Los Angeles Times, the Jerusalem Post, National Review, American Greatness, The Weekly Standard, and in Jewish media in American and in Israel. A winner of an American Jurisprudence Award in Professional Legal Ethics, Rabbi Fischer also is the author of two books, including General Sharon’s War Against Time Magazine, which covered the Israeli General’s 1980s landmark libel suit.
Most Popular
1
Hither and Yon
Here’s What Happens When Democrats Abandon a City to Crime
by Scott McKay