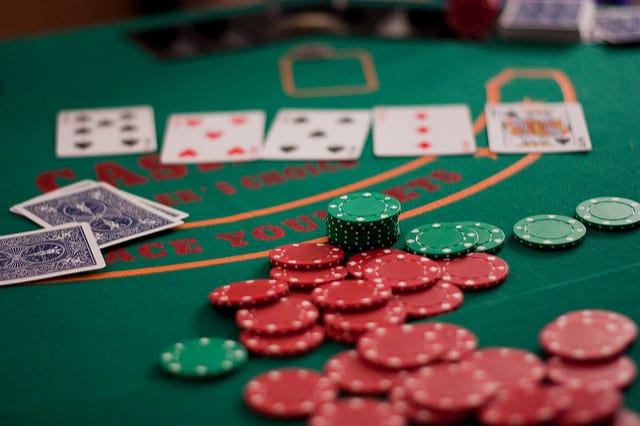 One advantage of placing a big bet into the pot in a game of No Limit Hold’em or Pot Limit Omaha on the flop or turn is the threat of bets on future streets that may be even larger than the initial wagers. Players who call bets on the flop or turn know they may face more difficult decisions later in the hand for most or all of their chip stacks.

Here’s one example. In this hand, we’ve reached the turn and the board is Qd-9h-8h-7c. The pot size grew to $150 with a raise and some calls before the flop. The initial raiser wagered $50 on the flop and only you called, holding the Jh-Ah for a flush draw, creating a pot of $250.

After that seven of clubs hits the turn, the initial raiser checks. Checking by the initial raiser in this case may indicate he’s trying to control the size of the pot with a hand such as A-A, K-K or A-Q because he’s worried about the various two pair and straight possibilities.

In this spot, you could try a big bet and may take this pot down, because not only are you making a sizable wager on the turn, but your bet also represents a threat of an even larger bet on the river. If that board continues to get scarier on seventh street, many players will lay down those big pairs.

This goes hand-in-hand with a concept known as reverse implied odds. As you probably know, implied odds are a consideration of the money you could make if you hit a draw. You may call $50 on a straight draw on the flop, not quite getting the correct mathematical odds at that very moment based on the current size of the pot, but figuring you can get your opponent to call a sizable river bet if you make your hand.

The concept of reverse implied odds is the opposite — risking a large amount to take a chance of winning a smaller amount. In the above example, you are giving your opponent reverse implied odds. If you make a big bet on the turn, he may think he will have to call that bet and one additional large wager on the river, so in order to win the $250 currently in the pot, he may have to put triple that number in before the hand is complete.

Of course, you don’t have to bet the river when you miss your flush draw if you think that your opponent will call that bluff, but your turn bet does ratchet up the pressure. Your opponent can’t be sure if you have a strong hand or are on a draw, which puts him in a tough spot. That’s the problem with giving up the lead. By checking the turn, he gave you control of the hand.

This concept also demonstrates why turn bluffs are often much more effective than river bluffs. If you bluff on the river, then your opponent only has to call that single bet to see if you really have the best hand. If you choose instead to bluff on the turn, then your opponent must call that bet with the looming threat of a larger bet on the river. Depending on the size of your stack, that could be a scary concept.