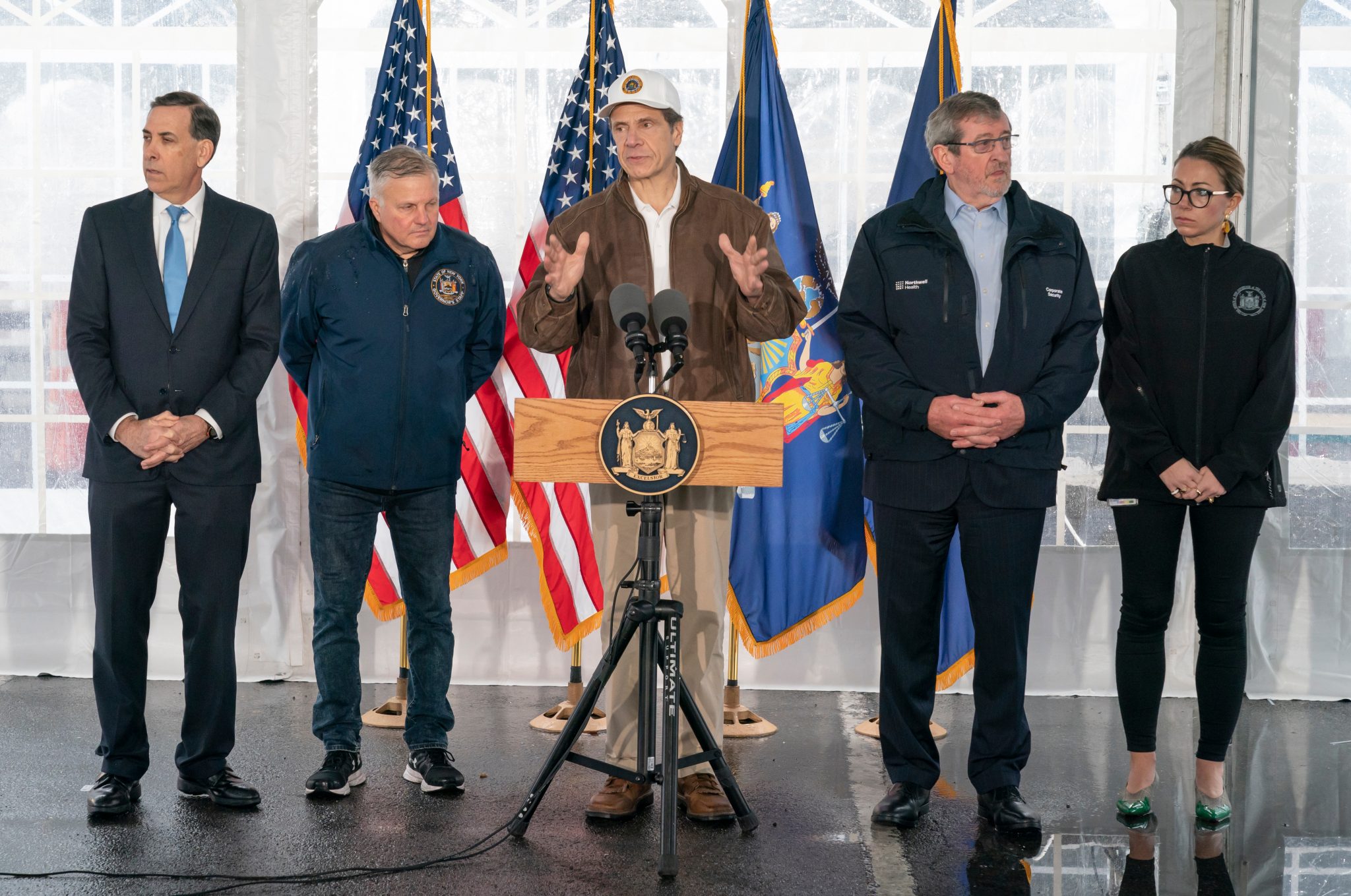 I’ve been riding my bike around no-hands because there is no traffic, and I’ve been rereading cowboy books, like True Grit and Lonesome Dove. Hell of a lot more relevant than plague books like The Plague. But I can get to that tomorrow. Or the next day. I have a feeling we’re stuck with this for a few weeks at least.

This is an email I sent to my Bishop and Priests:

What’s the difference between a supermarket and a Church?

It is the work of the Devil.

How will you answer to God for depriving the faithful of the spiritual life they need?

May God have mercy on your souls.

On “The Moralizing Cuomo Brothers,” by George Neumayr

Chris Cuomo the other night was pounding his chest about Texas Lt. Gov. Dan Patrick suggesting that the elderly would be willing to “sacrifice” for the economy. Chris Cuomo was appalled by the suggestion. Well, as one of the “elderly” — age 72 — with a few underlying health conditions that could paint the target squarely on my back, I say to Chris, “How dare you presume to know what I think and speak for me?” I am totally in favor of reopening the economy, and I will take my chances. That’s not to say I will be irresponsible about it. I will take the necessary precautions, but I am not willing to destroy the economy of my children and grandchildren over this. Let us seniors speak for ourselves rather than some young media personality who “knows what’s best for us.”

On “A Plague of Democratic Partisanship,” by David Catron

This is the kind of stuff that the ruling class never sees backfiring. My brothers & sisters & I in the restaurant biz are in one of the hardest hit industries of this whole debacle. In my industry especially, there are tons of people who aren’t living paycheck to paycheck, but shift to shift. That’s because many of them are in their early 20s & in the process of transitioning from college to the “real world” of “adulting.” I’ve been in the biz for 20 years at every level from mom n pop Greek diners in Pittsburgh, to $60 a head fine dining restaurants working for James Beard nominees, all the way to “corporate hell” chain restaurants nowadays. I can say that we are some of the bluest of blue collar folks. We work long, rough shifts, nights, weekends & holidays. And while I’m blessed enough to have a wife who has a professional, MBA level business career, most of the kids I work with, who average 10-20 years younger than me, aren’t that lucky. And THESE are the people who will be most helped by the “individual” portion of this stimulus.

Read more Letters to the Editor here, and send yours to editor@spectator.org!

These are also the people that the regressives claim to care the most about. They are the ones whom regressives target as potential voters. But one thing about people who work in my biz is that if you love your job & are good at it, you’re also good at sniffing out BS when you hear it. Even the most a-political line cook or server can see with their own eyes who’s held this legislation up. People are wondering how they’re gonna pay their bills on meager unemployment checks, praying for a little more help, & THESE schmucks in Congress wanna fix up the Kennedy Center & implement portions of the Bolshevik Green New Deal. Again, its painfully obvious to even the most a-political person that it sure as hell ain’t Trump or Republicans who’re kaka-ing the bed on this. And just as Dems as a party repudiated Bolshevik Bernie, so too will the American people repudiate the Dems in this upcoming election. Russiagate & Ukrainegate solidified Trump’s support on the right, & MAYBE opened a few eyes amongst independent voters. But THIS stunt this week over this relief legislation will ENSURE that Trump wins pretty handily this November.

On “Planning Three Steps Ahead: On the Need and a Plan to Divorce From China, by Dov Fischer

I wrote a similar column, not nearly so elegant, last week: https://www.americanthinker…

My mother was a virulent anti ChiCom in the late 60’s and ongoing. I learned that lesson well. When you choose to buy cotton from a known slave owner, you enable slavery. At some point, it is not just economics, it is morality, and they cannot be balanced.

We will collectively move away from China, and for the people who put us in this position it won’t be the morality, but it will be the economics that force it. I don’t buy anything made in China if there is an alternative, and I believe there will be a lot more people joining that movement. CEOs who ignore this will do so at their own peril.

On “The Game Changer: President Trump Was Right,” March 23

I heard the press conference in question. I was appalled by the post press conversation by a medical expert on NPR that devoted time to mentioning the President exaggerates, lies, and distorts. The expert went on to point out the conflict with Fauci.

I had already read about Korea and their experience with chloroquine. I don’t believe everything that comes out of China, but I am aware they had a similar experience. So Dr. Fauci was a bit reticent, holding back. While the President was reporting what he was told in his briefing.

NPR was trying to dampen hope, which it is funded by the deep state to do. Trump is, after all, evil — though he is trying to solve this horrific problem.

I have had this chloroquine stuff before. My ship was operating in the central Africa area and we were given various doses of this stuff to prevent us from catching malaria. It effected us in different ways, some got very sick at the stomach, some had no effects at all, and for myself I got a queasy stomach but it didn’t stop me from drinking beer at the local hot spots!

I fully agree! I’m 71 y/o and I survived Vietnam, so I’ll take my chances with this. I don’t need to leave my house to earn a living since money now magically appears in my bank account each month, so that’s good.

Of course, I’ll be prudent and wash my hands, use social distancing, and the such, but if my luck runs out, I’ve had a good life, so don’t stop the world on my account.

R. Fisher: Gotta agree with you. I’m 72 and also did a stint in Nam. Life has its speed bumps and this is one of them. I don’t expect the young people to sacrifice their next ten years to dig us out of the hole we are digging right now. My county — Greene County, Missouri — just instituted a 30 day “lock down.” We have 18 cases and 3 deaths — all deaths in one nursing home — so we are going to effectively destroy the economy of a half million people in the county because of 18 infections and 3 deaths. Insanity! The former head of the Greene County Health department and now a county commissioner at age 85 has signed off on this. He’s a 45 year close personal friend of mine and I can’t even bring myself to tell him what I think of his actions, which border on criminal. He is Joe Biden in the flesh — onset of dementia and senile — yet no one seems to have the guts to tell him to hang it up. I can stay home for the next 60 days if I need to and will continue to eat. My kids, though, could lose their business and their livelihood over this. It’s ridiculous. Like you if I die tomorrow so be it. I will leave this world one of the richest — in non-material ways — men ever. It’s been a good life but I refuse to continue to hold on to it at the cost of my children and grandchildren’s futures.

On “Even in Crisis, Union Priorities Win,” by Steven Greenhut

Mr. Greenhut, any article I read from you leaves me sadly fascinated on two fronts. First that you have the courage to live in a loony bin that is the (Late, Great) Golden State and second that a state where the Conservative Movement can trace its roots back to has been so co-opted and corrupted. I am sincerely sorry you have to endure the blatant nonsense of a government that is only interested in power and an electorate that readily agrees with whatever measure of male bovine excrement is being foisted upon them.

You have my admiration and respect good sir for not renting a U-Haul and running for the nearest border; though I doubt anyone would blame you if you did.

On “Boredom: The Silent Killer,” by Itxu Díaz

Starting week 2 of lockdown today here on Tenerife. Plenty of beer, vino tinto, and booze, not to mention food and toilet paper. Got internet radio station playing, who knew one of the planet’s best 30s and 40s Swing Music stations was in Limoges, France? Going to sand down desk-drawer that sticks. That’s it.