The Right Prescription,Top Story Andrew Cuomo,Chuck Schumer,Coronavirus,COVID-19 and the Economy,Nancy Pelosi A Plague of Democratic Partisanship - The American Spectator | USA News and Politics
Menu
The Right Prescription
A Plague of Democratic Partisanship
Americans’ anxiety about the economy is being exploited for political ends. 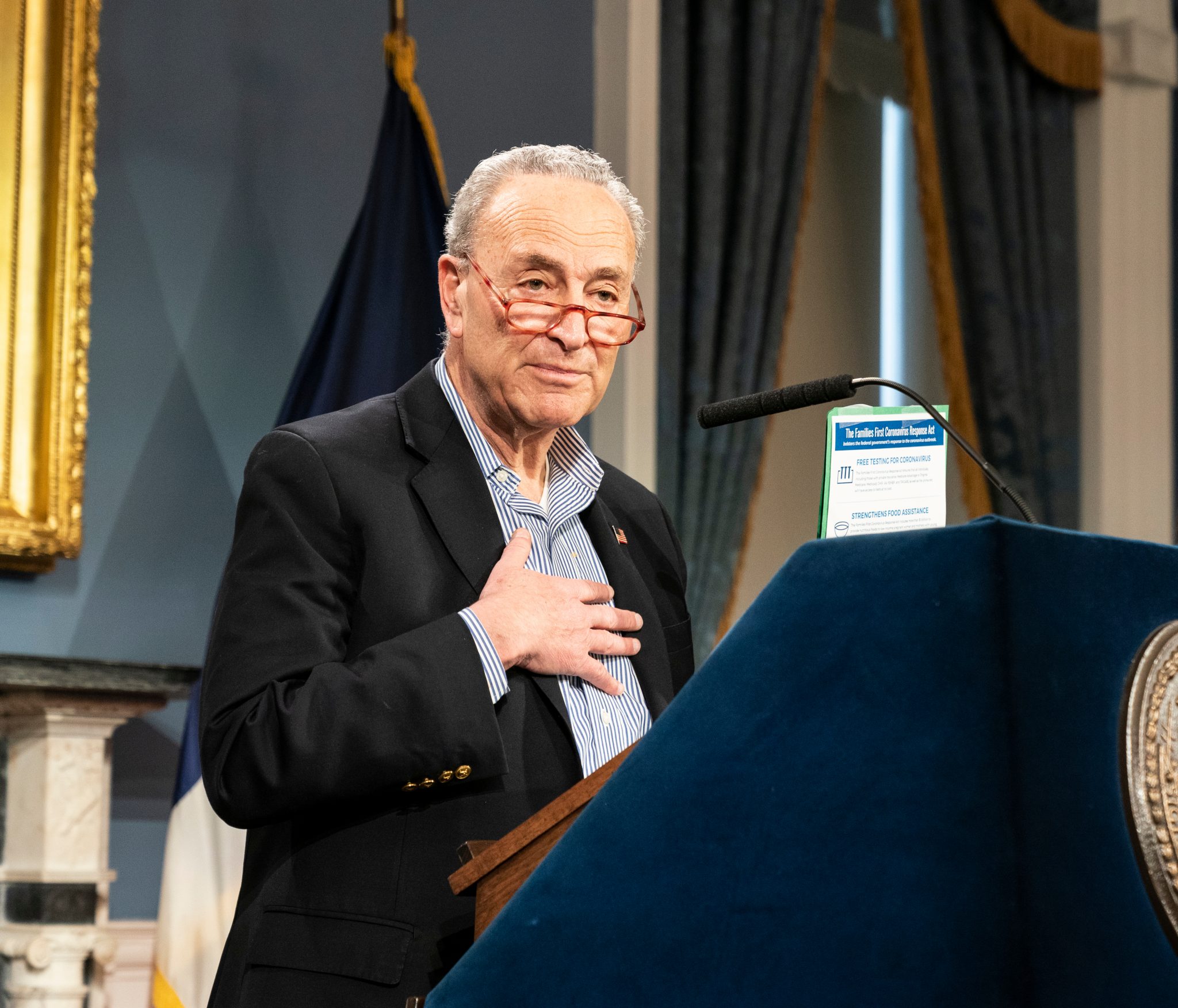 An overwhelming majority of Americans are worried about the financial effects of state and local measures imposed to slow the spread of COVID-19, yet the Democrats continue to dither over an economic stimulus bill. A new Harris poll reveals that 91 percent of Americans are “increasingly concerned” about the economy. Late Wednesday, the Senate finally passed an emergency relief package but only after overcoming a threat by Vermont Sen. Bernie Sanders to put a hold on the bill. House Majority Leader Steny Hoyer (D-Md.) says the lower chamber won’t take up the measure until Friday, and the Democratic governor of New York has demanded additional allocations for his state before they pass it.

Despite the prominent role played by Sen. Charles Schumer (D-N.Y.) in hammering out the Senate bill, New York Gov. Andrew Cuomo said on Wednesday that it would be terrible for his state: “I spoke to our House congressional delegation this morning, I said to them ‘this doesn’t do it.’ I understand the Senate theory and the Republican theory but we need the House to make adjustments.” New York has been hard hit by coronavirus pursuant to the density of its population and Cuomo’s inability to convince the residents of New York City to take him seriously on social distancing. Cuomo scolded the city’s non-compliant residents last Sunday: “It is arrogant. It is self-destructive.”

Sen. Sanders, who is of course running for the Democratic presidential nomination, threatened to put a hold on the bill if Republicans Lindsey Graham (R-S.C.), Tim Scott (R-S.C.), Ben Sasse (R-Neb.), and Rick Scott (R-Fla.) failed to support a provision in the bill that will pay some workers more in unemployment benefits than they would earn by working. As Graham put it, “This proposal will make it hard for our employers to maintain their workforce, particularly in the area of healthcare, thus, significantly delaying the economic recovery and impairing our health and safety.” Sanders ignored Graham’s point but  released one of his trademark corporation-bashing statements Wednesday:

In my view, it would be an outrage to prevent working-class Americans to receive the emergency unemployment assistance included in this legislation. Unless these Republican Senators drop their objections, I am prepared to put a hold on this bill until stronger conditions are imposed on the $500 billion corporate welfare fund to make sure that any corporation receiving financial assistance under this legislation does not lay off workers, cut wages or benefits, ship jobs overseas, or pay poverty wages.

All of this comes on the heels of a cynical Sunday maneuver by Senate Democrats, who exploited the absence of five self-quarantined Republicans to block a procedural motion involving a bipartisan coronavirus rescue package. That bill had been hammered out over several days of negotiation — ostensibly in good faith — between Senate Democrats and Republicans. Yet on Saturday evening, House Speaker Nancy Pelosi flew in from the coast, and, though she isn’t a member of the Senate, by Sunday morning the deal was dead. This outraged the Senate Republicans who had worked on the bill. A telling measure of their anger was the response of moderate Sen. Susan Collins (R-Maine):

The answer, of course, is that that the Democrats decided to hold the legislation hostage until the GOP agreed to insert various provisions that have nothing to do with the purpose of the bill. Sen. Tom Cotton (R-Ark.) provides a partial list: Corporate pay statistics by race for companies receiving assistance, a bailout of all current postal service debt, required early voting, required same-day voter registration, a $10,000 bailout for student loans, the use of official time for union collective bargaining, full offset of airline emissions by 2025, greenhouse gas statistics for individual flights, retirement plans for community newspaper employees, $15 minimum wage at companies receiving assistance, ad infinitum.

It’s difficult to imagine anything more cynical than this partisan effort to exploit a pandemic that is not merely killing Americans but also destroying the economic foundation upon which the survivors depend for their livelihoods. While congressional Republicans and President Trump attempt to ameliorate both emergencies, partisans attack them, as former Vice President Joe Biden did three days ago. As indicated by the Harris poll noted above, many Americans are worried about the economy as well as COVID-19, but Democrats see both as opportunities. We are in the grip of a partisan plague, and politicians like Nancy Pelosi, Chuck Schumer, Bernie Sanders, Andrew Cuomo, and Joe Biden are the rats.