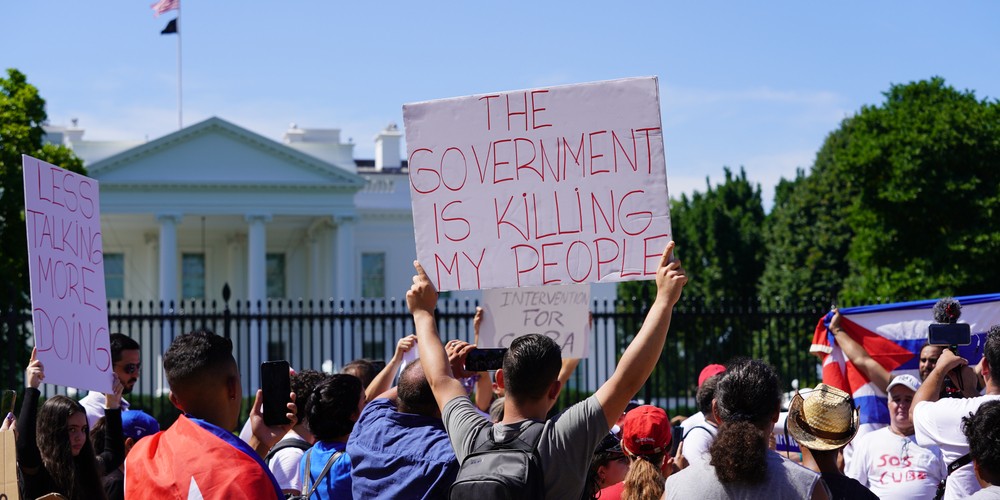 In the 1970s, the Latin American Left played a key role in the destruction of liberal democracy, which it attacked as an instrument of bourgeois domination. In many cases the leftists were so “successful” they helped bring about right-wing military dictatorships.

Half a century later, the Latin American Left has not yet learned the advantages of liberal democracy under the rule of law. Almost everywhere, the Left practices the fascist methods it routinely denounces in others. The Biden administration needs to pay attention.

For example, in recent weeks the Nicaraguan dictatorship has jailed several presidential candidates who sought to challenge Daniel Ortega in the November elections. In Cuba, hordes of thugs have been sent out by President Miguel Díaz-Canel to crush the protests of thousands of Cubans who have been crying for “freedom” on the island.

In Venezuela, FAES, a special unit of the national police accused of torture and executions, has detained Freddy Guevara, a close associate of Juan Guaidó — whom the international community recognizes as Venezuela’s interim president — and raided the latter’s house, threatening to take him prisoner.

In Argentina, not a day goes by without the government of President Alberto Fernández throwing trumped-up accusations against former President Mauricio Macri and other critics of the current regime.

In Mexico, leftist President Andres Manuel López Obrador’s plans to tighten his grip on power, so he could carry out what he calls his “transformation project,” were thwarted by his party’s poor showing in the recent midterm elections. López Obrador’s hope was to obtain a two-thirds majority in the Chamber of Deputies that would allow him to modify the Constitution and seek reelection. His poor performance and the resistance of many Mexicans to his plans have stood in the way.

Even in countries where leftists are not in power, the Left seems incapable of accepting liberal democracy.

In Colombia, President Iván Duque is miraculously alive after an attack on the Black Hawk helicopter in which he and other government officials were traveling. Leftist guerrillas affiliated with the so-called National Liberation Army (ELN) are suspected.

In Chile, savagely violent protests that began in October 2019 and have included the burning of subway stations have forced President Sebastián Piñera to accede to demands for a new Constitution. The objective is to end the liberal democracy and market economy that has made that country the most successful in the region. The Constituent Convention that will draft the new Constitution has 155 members, of which at least 79 are seen as far to the left of the moderate center-left coalition that has guided Chile’s success since its transition to democracy. The first aim of the leftists will be to kill a requirement that it takes a minimum two-thirds vote of Convention delegates to approve each article of the new Constitution. That way the leftists can ram through their illiberal regime.

And in Peru, my native country, the government of President Francisco Sagasti has thrown its support behind Marxist Pedro Castillo, who is preparing to take power on July 28 despite allegations of widespread voting fraud in the recent runoff election against Keiko Fujimori. Castillo has announced that on day one in office he will demand that the Peruvian Congress call a Constituent Assembly to “reform” its Constitution, even though the Constitution requires Congress itself to approve any constitutional reforms. Castillo’s aim, of course, is to install a long-term socialist regime to replace Peru’s liberal democracy.

For the most part, this heyday of left-wing fascism is occurring with the overt and hypocritical complicity of the moderate, social-democratic Left. The only exceptions are the countries where leftist fascists already control government. There, the revolutionaries are actively persecuting members of the moderate, “soft” Left who once supported them.

Elsewhere, there is nothing in Latin America today to block the revolutionary Marxists from seizing power. The liberal, democratic Left, out of opportunism or moral cowardice, has given up confronting the extreme, fascist Left.

Alvaro Vargas Llosa is a Senior Fellow with the Independent Institute, Oakland, California. His books include Liberty for Latin America and, most recently, Global Crossings: Immigration, Civilization and America.