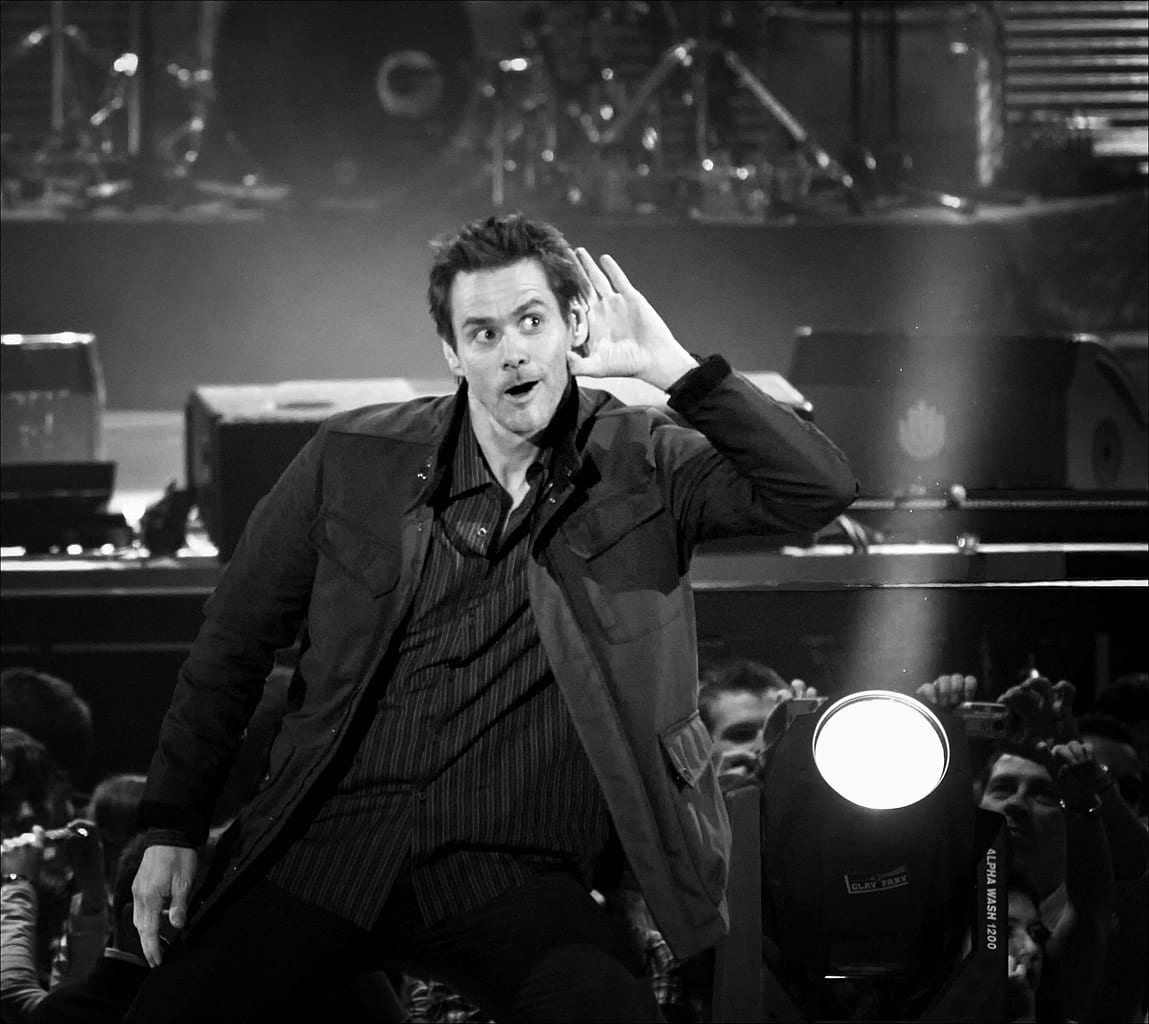 Even though he’s best known as a comic actor from movies like Dumb and Dumber and Ace Ventura: Pet Detective, Mr. Carrey has also received a lot of recognition for his political paintings. President Trump is the subject he paints most often and he’s Tweeted 61 paintings he’s completed of the President since Election Day, 2016.

A sampling of some of his artwork includes: Trump hammering a nail into Jesus’ hand, Trump using a bone saw to cut off the arm of a screaming journalist while blood sprays everywhere, Trump filling pieces of bread with his own feces for eager “House Republicans” to eat as “breakfast sandwiches,” the hands of Marco Rubio covered in “the blood of innocent children,” two of Trump’s sons being gored by an elephant, Trump, Kim Jong-un, and Vladimir Putin standing together naked, each drawn with a tiny penis, a “monstrous” picture of Sarah Sanders” whose only purpose in life is to lie for the wicked,” Trump stomping on the head of a young immigrant, Robert Mueller tightly squeezing a toy likeness of Trump as his eyes, ears, and mouth pop out of his face, an explosive device wired to the opening of Trump’s mouth, Trump tied to a stake and being burned alive with the captioned hashtag “#burnthewitch,” and two other images that are too graphic to describe here, but feel free to see either one for yourself.

Even though its website says “We consider graphic violence to be any form of gory media related to death, serious injury, violence, or surgical procedures,” none of these images has been blocked by Twitter or marked with Twitter’s usual “contains sensitive content” warning. Its “Hateful conduct policy” says its company is “committed to combating abuse motivated by hatred, prejudice or intolerance,” but I question how “committed” it is as each of the aforementioned images is undeniably “motivated by hatred” and “intolerance” towards President Trump and his allies.

Defenders of Mr. Carrey will argue that President Trump does the same thing on his own Twitter account when he labels his enemies with unflattering nicknames and attacks anyone who disagrees with him. Another undeniable truth. But hateful rhetoric is a terrible justification for more hateful rhetoric, especially when Mr. Carrey’s images and captions go far beyond President Trump’s level of hostility.

Jim Carrey clearly does not share Dr. King’s ideals. Regarding President Trump’s own rhetoric and many of his policies, Mr. Carrey certainly has cause for concern. He also has cause for disagreement, cause to be angry, and even cause for alarm. But his artwork goes far beyond dissent and instead boils over with naked aggression and rage. Each disturbing painting not only reveals what’s inside Jim Carrey, it also reveals something about anyone unwilling to speak out against him or these images.

Every day I see journalists and celebrities alike taking President Trump to task for his harmful rhetoric, but I’ve scoured the internet and can’t find a single celebrity or journalist who has called Jim Carrey out for his.

Sure, his microphone isn’t nearly as loud as the President’s, but Mr. Carrey has over 18 million Twitter followers and is one of the most widely recognized celebrities alive today. Additionally, he has massive news outlets like HuffPost relentlessly reposting nearly every piece of art he paints to its tens of millions of followers as well.

If it’s wrong for President Trump to traffic in fear and hatred, why is it praiseworthy when Jim Carrey does the same? I’ve grown accustomed to selective outrage and double standards, but this is something else entirely. To put things in perspective, imagine if a celebrity of Jim Carrey’s stature published just one of the images described above about President Obama or his family during his time in the Oval Office — or even a relatively benign painting of Michelle Obama with the words “SKIN DEEP” written across her face like Mr. Carrey did to Ivanka Trump.

The condemnation would be swift and absolute. Yet Jim Carrey has been painting such images and posting them to his Twitter feed for over two years now and he hasn’t faced so much as a speed bump of opposition nor a word of condemnation from any journalists or his peers in Hollywood. Instead, he gets encouragement from celebrities like LeBron James and Rosie O’Donnell.

The other week I was heartened to see many celebrities and news agencies alike walk back their initial condemnation of the Covington Catholic teenagers over the altercation between Nick Sandmann and Nathan Phillips at the Lincoln Memorial. Celebrities like Jamie Lee Curtis admitted she made a “snap judgement” without seeing both sides of the encounter.

Jim Carrey was not one of those who rushed to judgement. Instead, he waited a full four days after the incident to enter the fray. That’s when he posted an image of Mr. Sandmann wearing a red hat imprinted with the words “Hate Again,” as his young peers taunt and jeer at the elder Phillips. He captioned the piece: “Baby snakes.”

By the time he posted his newest painting he would have had many opportunities to see both sides of what had actually transpired. Jim Carrey didn’t care about reviewing both sides, however, and he certainly didn’t care to paint an accurate portrayal of what really happened. He only wanted to throw gasoline on a fire that was finally starting to diminish.

It further proves that reality and reason don’t matter to Mr. Carrey. And he really doesn’t care who he offends or how many of his fans abandon him along the way. When he was warned that his polarizing artwork would cost him many of his followers, he told Vulture: “Lose them! You just have to go your own way and say your peace and truth, and that’s what I’m doing.”

But saying his “peace and truth” is not all he’s doing. He’s enraging the already enraged, bringing to life vile fantasies against President Trump and allies, and giving his own followers permission to hate.

Long after he leaves the White House, Donald Trump will still be held responsible for his words, actions, and divisive rhetoric. History will judge him for what he is and what he’s done. But history will also judge every person of influence who sold the same brand of fear and hate.

Jim Carrey may loathe Donald Trump, but he’s no better a person. By employing the same tools Trump uses, he’s forfeited the high ground and has resolved nothing.

Maya Angelou could have been speaking to either President Trump or Mr. Carrey when she said: “Hate, it has caused a lot of problems in the world, but has not solved one yet.”

In the documentary short I Needed Color, Carrey himself admits: “You can tell my inner life by the darkness in some of (my paintings).” I have to agree with you there, Jim, and I think it’s time you stepped into the light.