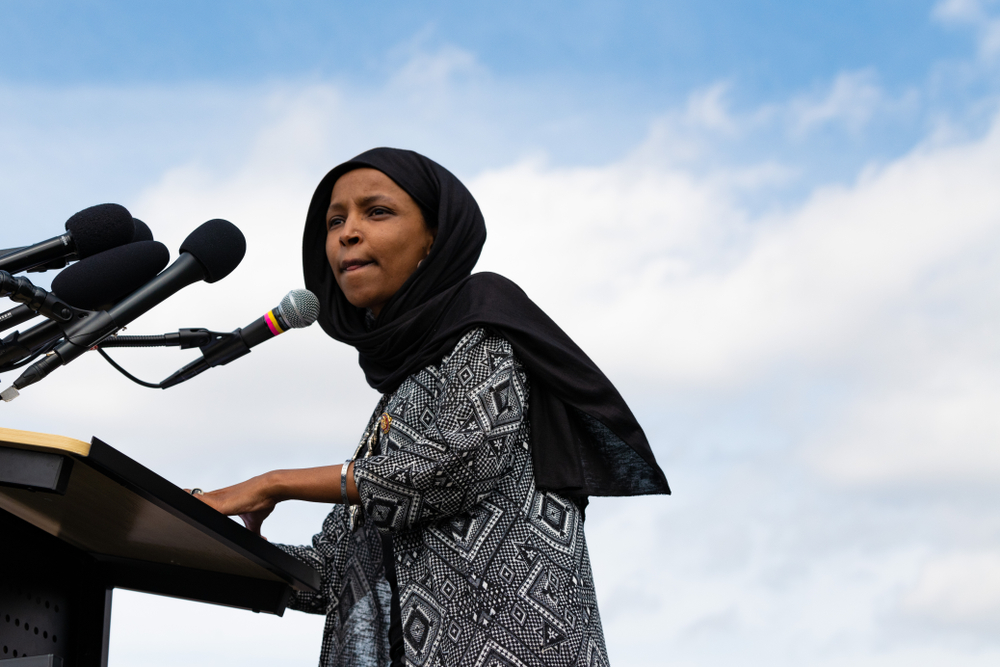 There is a direct link between the Democrats’ identity politics and the anti-Semitism and anti-Americanism we see more of every day. Some immunity is awarded to those who belong to one of the more fashionable minorities du jour.

Some minorities are fashionable, but some — women, people of color, Muslims, LGBTQ people, and a few others — are more fashionable than others and, thus, more protected. The idea that all lives matter, not just those of minorities, is unthinkable to the wokistas.

When Rep. Ilhan Omar (D-Minn.) tweeted her usual anti-Semitism and anti-Americanism last week, she probably thought that because she represents two or three of those categories — women of color and Muslims — her reprehensible words would be unassailable.

Omar’s history of anti-Semitism and anti-Americanism is longer than her political career. According to a Fox News report, in 2012 she tweeted, “Israel has hypnotized the world, may Allah awaken the people and help them see the evil doings of Israel.” (She later deleted that tweet after she was criticized briefly for it.)

Omar claims that she isn’t condemning peoples, just the actions of their governments. But the statements and positions she has made and taken since she was elected in 2018 make it clear that she is one of those immigrants who wants to turn our nation into something like the nation of her birth, Somalia. Her claim of allegiance to the United States is, at best, questionable.

Her latest statements and tweets — in which she equated the United States and Israel to the Hamas and Taliban terrorist networks — are part and parcel of her beliefs.

Omar, unfortunately a member of the House Foreign Affairs Committee, had questioned Secretary of State Antony Blinken about the recent Hamas attacks against Israel that precipitated an 11-day war.

After questioning Blinken, she posted a video of part of her questioning, entitled “We must have the same level of accountability and justice for all victims of crimes against humanity.” To that, she added in a tweet that “We have seen unthinkable atrocities committed by the US, Hamas, Israel, Afghanistan, and the Taliban.” Not only did her statement equate the conduct of the U.S. and Israel with terrorists such as Hamas and the Taliban, but it also stated their moral equivalence.

Terrorists have, since the 1970s, sought that moral equivalence. Omar is eager to supply it.

Omar’s statement was consistent with her past anti-Semitic statements, which, for example, said that members of the U.S. Congress who favor Israel only did so because they are paid to do so: “It’s all about the Benjamins, baby.”

When she tweeted the equivalence of the U.S. and Israel with terrorists, Omar was immediately defended by the media. An MSNBC opinion writer said not only that she was right but that “Any headline you see that says otherwise — that her comments this week were anti-Semitic or promoted hate toward Israel, that she sympathized with or gave cover to terrorists — is accepting a bad faith attack as a truth.”

It was too much for some few Democratic members of the House. Eleven Jewish Democrat members of Congress wrote that “drawing false equivalencies between democracies like the U.S. and Israel and groups that engage in terrorism like Hamas and the Taliban foments prejudice and undermines progress toward a future of peace and security for all.”

After that, even Nancy Pelosi and her leadership team said that Omar had crossed the line, but they didn’t propose any disciplinary action against her. They — and President Biden, who hasn’t said anything to criticize Omar — are content to let her spew hatred.

Omar, naturally, responded with a Twitter tirade, relying on her minority status to accuse the 11 Jewish congressmen of using “Islamophobic tropes” in their response despite the fact that her accusation was nonsense. There were no “Islamophobic tropes” in their letter. Fellow members of “the Squad” — Reps. Rashida Tlaib and Alexandria Cutie-Cortez — harshly condemned those who spoke out against Omar.

False declarations of equivalency are common among Democrats. President Biden, in his first address to a joint session of Congress last month, declared that the Jan. 6 riot at the Capitol was the worst attack on our democracy since the Civil War (never mind Pearl Harbor or 9/11). He has also said that climate change is the greatest threat to our national security. China, Russia, Iran, and North Korea must have been chuckling at that statement.

With that sort of loose-brained leadership, it’s no wonder that Omar felt she was immune from discipline with her latest rant. She isn’t immune from criticism, but she is immune from actions that could rein her in. When Speaker Pelosi and her leadership team responded to her rants, they said she had crossed a line but didn’t even speak of the proper punishments — removal from the Foreign Affairs Committee and censure.

Omar then issued a “clarification,” saying — contrary to the obvious facts — that “I was in no way equating terrorist organizations with democratic countries with well-established judicial systems.” The Hamas terrorists disagreed.

The Hamas terrorists objected to being compared to democracies such as Israel and the United States. Hamas’s public affairs department issued a press release that said, “We appreciate Mrs. Ilhan Omar’s stances in defending justice and the rights of the oppressed around the world, foremost of which are the just rights of our Palestinian people, but we deplore this unfair combination that is contrary to justice and international law.”

Not to mention the facts. But facts aren’t important to terrorists or Omar.

The Council on American-Islamic Relations (CAIR) passes itself off as an Islamic civil rights organization, but it has been tied to Hamas. Speaking at a CAIR fundraiser in 2019, Omar referred to the 9/11 attacks, saying that “CAIR was founded after 9/11 because they recognized that some people did something, and that all of us were starting to lose access to our civil liberties.”

“Some people did something” and caused the deaths of about 3,000 innocent Americans that day.

It’s highly unlikely that Omar is an opinion leader among any except her fellow “Squad” members. Nevertheless, there have been a significant number of anti-Semitic incidents around the country — and around the world — resulting from the Hamas–Israel 11-day war this month.

That war — in which Hamas was defeated yet again by the Israelis — has precipitated incidents around the country. There have been brawls between Palestinian supporters and Jews in Times Square. People carrying Palestinian flags have attacked outdoor diners in Los Angeles. A synagogue in Alaska was defaced with a Nazi swastika. Such vandalism has also been documented in Florida and Illinois. Few, if any, prosecutions will result from those attacks.

The BBC reported that “The Anti-Defamation League (ADL), which tracks incidents of anti-Jewish violence and bias, says they saw a 75% increase in anti-Semitism reports to the agency’s 25 regional offices after Israeli-Palestinian fighting began. The figure jumped from 127 incidents in the two weeks prior to fighting to 222 in the two weeks after violence broke out.”

Omar, and her fellow Muslim in Congress, Rep. Rashida Tlaib (D-Mich.), are part of the problem. Both support the “Boycott, Divestment and Sanctions” movement against Israel, whose founder admits that the goal of his movement is to destroy Israel. The House leadership tolerates them because they are members of a fashionable minority.

Tolerance in the United States used to mean that every citizen and immigrant benefited from the same rights and responsibilities under our Constitution. Steven King, a now-former Iowa congressman, was removed from his committee assignments after making racist remarks. He was redistricted out of office.

Omar and Tlaib aren’t guilty of any crime, but their anti-Semitism and, yes, racism are tolerated by Pelosi. They are safe from the discipline that fell on King, but they shouldn’t be. Pelosi should, at least, remove Omar from her House Committee on Foreign Relations post. She won’t.