This year’s Robert L. Bartley Gala was our biggest yet. On the night of September 26th, around four hundred journalists, business people, government officials and power-players in Washington gathered at the Trump International Hotel in Washington, D.C. for fun and festivities in celebration of The American Spectator’s Gold Anniversary. Noted guests from government included former Deputy to the President Sebastian Gorka, former Ambassador to the European Union C. Boyden Gray, former Solicitor General Ted Olson, former Idaho Senator Steve Symms, former Secretary of Defense Donald Rumsfeld, Counselor to the President Kellyanne Conway, and Attorney General Jeff Sessions. Notable journalists and media personalities included Bill Kristol and Andrew Ferguson of the Weekly Standard, Freddy Gray and Shez Shafiq of the London Spectator, Seth Lipsky of the New York Sun, Chris Plante of The Chris Plante Show, and Daniel Henninger and James Taranto of the Wall Street Journal. Notable leaders in the think tank and nonprofit industry attended, including Hillsdale College’s President Larry Arnn, Independent Women’s Forum’s CEO Heather Higgins, Executive Vice President of the Federalist Society Leonard Leo, former President of the Hudson Institute Herb London, CEO of Heritage Action Mike Needham, Chairman of the American Conservative Union Matt Schlapp, President of the Competitive Enterprise Institute Kent Lassman, President of the Foundation for Defense of Democracies Cliff May, and President of Young Americans for Liberty Cliff Maloney. An Honor Guard of Army Rangers who served in Iraq and Afghanistan was kind enough to bring in the flag at the start of the night. 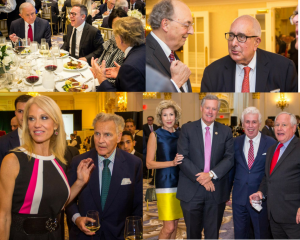 The central themes of our annual editorial program are traditionally summarized at our annual gala, named for the Wall Street Journal’s legendary champion of freedom, Robert L. Bartley. The American Spectator has long tracked, and indeed has been part of, the public enunciation of the growing “leave us alone” impulse in American public sentiment, most recently manifest in the 2016 election. We crafted our 2017 gala to explore and highlight this trend of going against the grain and putting our country first.

Grover Norquist, our Emcee, and the President of Americans for Tax Reform, kicked off the gala with a reminiscence of The American Spectator over the last 50 years and how the magazine has been consistent to our principles throughout the years, even when many were against us. He also noted that “If it had not been for Bob Tyrrell and The American Spectator, Hillary Clinton would have been President of the United States.” Norquist gave remarks at various points throughout the night, including the humorous quip that he hoped “everyone was having more fun than Anthony Weiner.” 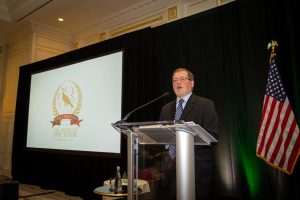 Following this, our founder and Editor in Chief, the conservative icon Bob Tyrrell gave his remarks. He highlighted the highs and the lows of the magazine over the last 50 years, in his “dead-end job” but noted that “If a dead-end job is the right job, it can be very amusing, and there can be a few achievements along the way. The American Spectator was the right job for me, and frankly, I’ve had a ball, so has Wlady and scores of others who have written for the Spectator.” 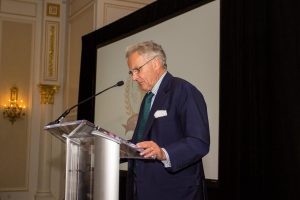 This year’s recipient of the Barbara Olson award was Greg Gutfeld, a former American Spectator intern and renowned Fox News commentator. Gutfeld discovered The American Spectator while at Berkeley, and said it “was the strangest magazine I had ever seen.” Despite this, Gutfeld was deeply influenced and inspired by the magazine, and decided to come and work for the Spectator as soon as he possibly could, eventually securing an internship in the mailroom, a very humble beginning. Gutfeld reminisced on those early days in the mail room, and told stories about sorting Bob Tyrrell’s books and meeting President Reagan. He also commented on the character of the organization, to Gutfeld the Spectator was a “hive of interesting people” and that it was fun, dismantling the liberal notion that conservatives cannot be culturally relevant. 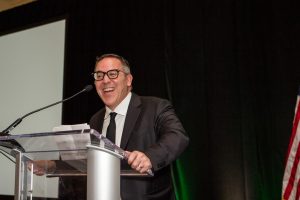 Dr. Edwin Feulner, the founder of the Heritage Foundation, received the John Von Kannon Service to the Cause award. Feulner recalled the early days of the modern conservative movement, especially one particular day that he spent on the Malibu beach with Bob Tyrrell back when The American Spectator was called The Alternative. Dr. Feulner discussed the importance of being able to adapt to changing conditions to push a conservative message, and highlighted the Spectator’s ability to do so. 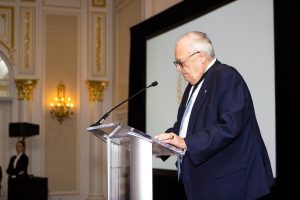 We featured Congressman Mark Meadows, chair of the House Freedom Caucus, as the keynote speaker. He discussed topics ranging from North Korea to sleepwalking. Most importantly he noted the importance of honesty in the media and thanked The American Spectator “for being truth tellers, for truly and remarkably telling what is actually going on among the clutter and headlines that would have you believe that this is a liberal nation and not a conservative one.” 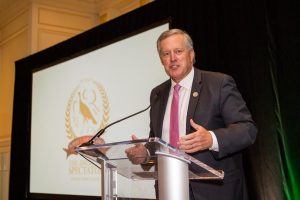 To close the night, Spectator veteran Ben Stein gave his thoughts on the last 50 years and highlighted the commitment to the truth that The American Spectator values so deeply. Stein cited the values that he found most prolific in the culture of the magazine to be, good writing, a sense of humor, fearless truth-telling, and most importantly loyalty. Stein particularly stressed The American Spectator’s role in keeping us from falling into the abyss of a Hillary Clinton presidency and the eternal fight against tyranny:

“George Orwell wrote in one of the greatest books ever written, ‘If you want a picture of the human race and its future, imagine a boot stamping on a human face, forever’. That was at the end of 1984. When interview, Orwell said, ‘The solution is simple, don’t let it happen!’ And that is what The American Spectator is all about, not letting that happen.” 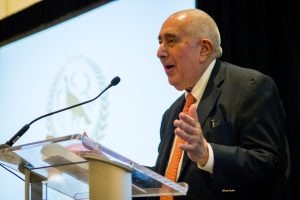 Next year’s gala is scheduled to be held at the Trump International Hotel on October 2nd and we predict it will be an even bigger hit than our Golden Anniversary. A half-century of bringing The American Spectator to the people of this great nation would not have been possible without the support of many generous donors and our most dedicated readers and subscribers Anyone, from our readers who first saw The American Spectator in 1967 to those who only discovered it online, who reads our content is supporting us bring truth to power. Here’s to the next 50 years at The American Spectator, let’s do this together.