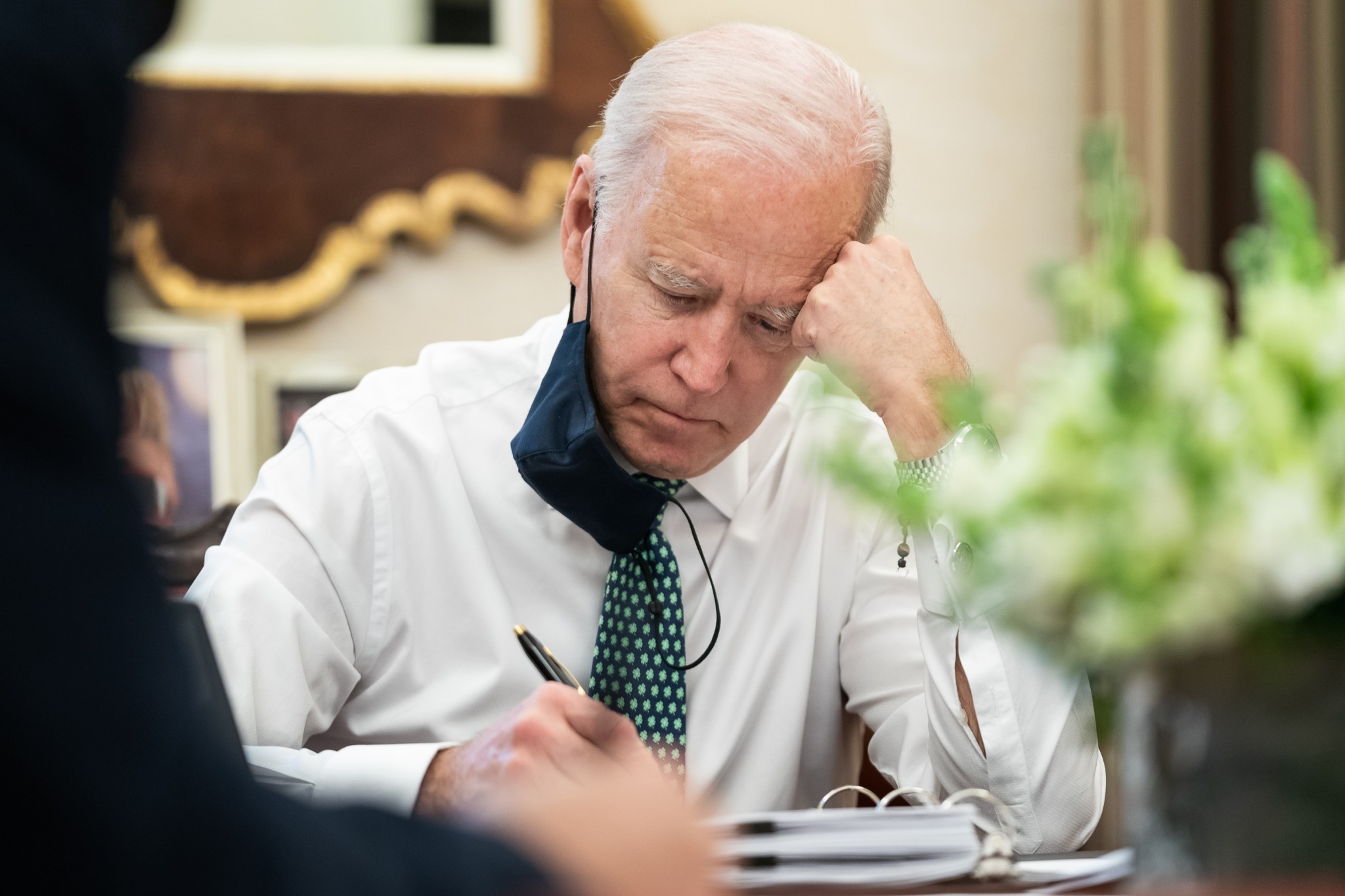 Amid President Joe Biden’s sagging approval ratings, many Democrats are viewing a reelection bid with increasing skepticism. His fellow partisans seem to be looking elsewhere, motivated by dissatisfaction with the state of the country, fear that he is too old for the office, and mounting terror that he will be unable to defeat former President Donald Trump in a rematch.

The litany of problems engulfing the Biden administration needs no introduction: soaring inflation, high gas prices, and a wide-open southern border. Many Democrats further charge that Biden has been ineffective at pursuing their left-wing policy goals, including the aborted “Build Back Better” bill, fighting against the Supreme Court’s reversal of Roe v. Wade, and restricting the Second Amendment. The president’s popularity is under siege from all sides; according to the RealClearPolitics polling average, his job approval rating stands at under 38 percent.

In a new poll released on Monday by the New York Times, only 33 percent of voters approve of Biden’s job performance, while 60 percent disapprove. Even among Democrats, 70 percent of whom approved of Biden’s job performance overall, there are significant signs of discontent. Just one-quarter of Democrats want the party to renominate Biden in 2024. Sixty-four percent said they would like a “different person.”

Of those Democrats who wanted a nominee other than Biden, the top reasons they gave were Biden’s advanced age and disappointment with his job as president. While desire for a new nominee spanned across demographic divides, younger voters were especially down on Biden: 5 percent of Democrats between the ages of 18 to 29 want him to be the nominee, while 94 percent want somebody else. Black voters, an instrumental part of the coalition that won Biden the nomination in 2020, are more favorable toward him. But even among them, 47 percent would prefer a new candidate.

Democratic discontent with the president is also percolating in the highest echelons of his party. “Should Biden Run in 2024? Democratic Whispers of ‘No’ Start to Rise” announced one New York Times headline last month. Beyond the president’s public standing (or lack thereof), many Democrats are concerned that his age prevents him from effectively doing his job. Biden is already the oldest president in American history, more so than even Ronald Reagan at the end of his second term.

According to White House aides who spoke with the New York Times, Biden’s energy level is “impressive for a man of his age, [but] not what it was.” Reportedly, “he often shuffles when he walks, and aides worry he will trip on a wire. He stumbles over words during public events, and they hold their breath to see if he makes it to the end without a gaffe.” While Biden has always been known for gaffes, a particularly egregious example went viral on Friday after he appeared to read teleprompter instructions during a speech.

If elected to a second term, Biden would be 86 years old upon leaving office. According to the Centers for Disease Control and Prevention, the average life expectancy for an American is 77 years, making it very probable that the president would have a significant health problem of some kind if he were to serve that long.

One problem for the anti-Biden Democrats is that there isn’t a clear alternative to the president, nor agreement about what the problem is exactly. As the Times put it, “Many Democratic leaders and voters want Mr. Biden to fight harder against Republicans, while others want him to seek more compromise.”

California Gov. Gavin Newsom publicly lamented that the Democrats have not been strong enough in countering Republican pro-life laws, asking “Where is my party?” in a speech after the leak of the Dobbs decision. Newsom also aired ads in Florida against Gov. Ron DeSantis, another potential 2024 contender on the Republican side. Illinois Gov. J. B. Pritzker took a high-profile trip to New Hampshire on June 18, a key early primary state. Some have even speculated that 2016 nominee Hillary Clinton might run for the presidency again. But all of the potential contenders have disavowed any move against the president, who has publicly said that he plans to run for reelection.

The Biden administration is evidently concerned with what a primary challenge would mean; both President Jimmy Carter and President George H. W. Bush faced serious opponents from within their party, and both men went on to lose reelection. In swearing off a run against Biden, Pritzker explicitly referenced the challenge Sen. Ted Kennedy gave Carter, telling CNN that a run against Biden would weaken the party.

But while some Democrats fear that forcing Biden out may doom their prospects of holding the White House, some think that not forcing him out would have the same effect. Politico reported on Monday that the progressive group RootsAction is preparing a public campaign to convince Biden to not seek a second term. RootsAction encouraged progressive Democrats who were disappointed about the defeat of Sens. Bernie Sanders and Elizabeth Warren to Biden in the 2020 primary to rally behind him. But now, they think it’s time for Biden to leave.

“Unfortunately, President Biden has been neither bold nor inspiring,” the group told Politico. “His prospects for winning re-election appear to be bleak. With so much at stake, making him the Democratic Party’s standard bearer in 2024 would be a tragic mistake.”

It is unclear how a challenge from Biden’s left would pan out. According to the New York Times poll, of the Democrats who said they preferred another candidate to Biden, only 10 percent said this was because they wanted someone more progressive. Given the general discontent with the administration, however, if a primary challenger arises, it has the potential to be a serious race.