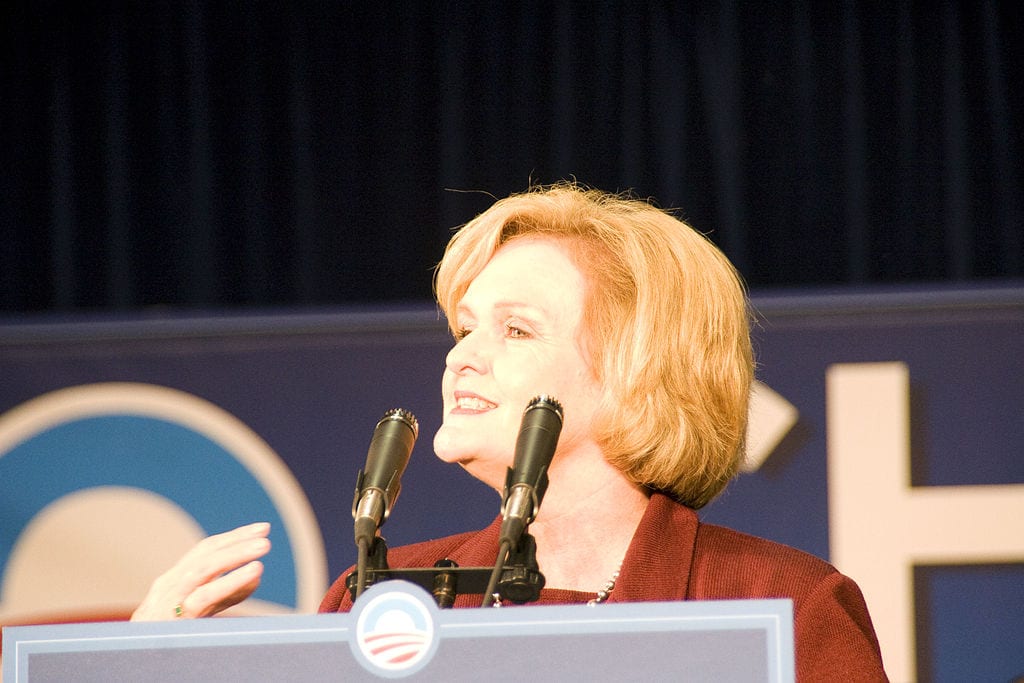 The outcomes of many close congressional contests will be decided by the number of ballots cast for Libertarian candidates who couldn’t win with the aid of divine intervention. And Democrats running in “red state” races are clearly counting on these unelectable candidates to divert enough votes from Republicans to allow them to eke out slim victories. To this end, they and their supporters are running covert campaign ads and sending dark money mailers on behalf of their Libertarian “opponents.” Among the Democratic beneficiaries of this strategy are Indiana Senator Joe Donnelly, Missouri Senator Claire McCaskill, and Montana Senator Jon Tester.

This is not a new tactic for the Democrats. In 2012, ProPublica reported that Jon Tester’s supporters “bought ads for a libertarian candidate who likely siphoned crucial votes away from the Republican challenger.” This election cycle, as TAS noted here last week, the strategy blew up in Tester’s face. Libertarian candidate Rick Breckenridge was so angered by a misleading “dark money” mailer sent by an unknown group that he denounced the practice in general, and encouraged his supporters to vote for Tester’s Republican challenger, Matt Rosendale. A similar mailer scam has been deployed in Missouri. The Washington Free Beacon reports:

Two dark money mailers sent to thousands of voters without any disclosure of who paid for it — a likely illegal act — were sent by the same St. Louis printing company which has been used by many Democratic campaigns in the state this cycle. The two mailers — the first one targeting Republican representative Ann Wagner and the second targeting Republican Senate candidate Josh Hawley — lack the standard disclosure statement identifying who paid for them.

In addition to encouraging voters to cast ballots for some third-party, like Libertarian Senate candidate Japeth Campbell, the mailers make demonstrably false claims about the positions of both Republicans. Wagner and Hawley are in very close contests with Democrats Cort VanOstranand Senator Claire McCaskill. In the latter’s case, this may well backfire. She used the prevalence of dark money in politics, which she blames on the Supreme Court’s ruling in Citizens United v. FEC, as a pretext to vote against now-Justice Brett Kavanaugh. Inevitably, she has been accused of gross hypocrisy. American Commitment’s Phil Kerpen phrased it succinctly:

What a total fraud McCaskill is, using “dark money” as an excuse to vote with the smear campaign against Judge Kavanaugh and then having allies try to save her with the darkest of dark money — illegal, no-disclaimer mailers designed to depress Republican turnout.

And this kind of chicanery isn’t limited to Montana and Missouri. Saturday, President Trump tweeted, “Rumor has it that Senator Joe Donnelly of Indiana is paying for Facebook ads for his so-called opponent on the libertarian ticket.” This is no rumor, however. It has been reported by several news outlets that Donnelly, who hasn’t been able to gain a decisive lead over GOP challenger Mike Braun in the Indiana Senate Race, collaborated with the Indiana Democratic Party in the covert funding of Facebook ads on pages with titles like, “Hoosier Conservatives.” They link to the campaign website of Libertarian candidate Lucy Brenton. Surprisingly, the Daily Beast reported it:

Indiana Democrats are funding a last-minute attempt to split the Republican vote in the state’s crucial Senate contest by boosting the race’s long-shot Libertarian candidate.… The state Democratic Party began purchasing Facebook ads on Thursday questioning the conservative bona fides of Republican challenger Mike Braun by, among other things, suggesting he backed Hillary Clinton in 2016.

Most of the “news” media have ignored the Democratic dirty tricks on the mailers and Facebook ads, despite their constant yammering about the evils of dark money. They also have been silent on the potential impact Libertarian campaigns can have on close races. For example, how many people reading this know that the West Virginia Senate race includes a Libertarian named Rusty Hollen who received 11 percent in a recent poll? The survey, commissioned by Charleston’s MetroNews, reports that 45 percent of likely voters favor Manchin, 40 percent favor Morrisey, and 11 percent favor Hollen. If this poll is accurate, it means Manchin is headed back to the Beltway.

Some libertarians will inevitably ask: How can we know all of this 11 percent is coming out of Morrisey’s support rather than Manchin’s? The obvious answer is that libertarians, by definition, prefer less government intrusion in our day-to-day lives, fewer regulatory constraints on the economy, and lower taxes. The Democrats are for bigger government, more economic micromanagement, and have promised to raise taxes. Being a Democrat, Manchin’s support includes almost no libertarians. Consequently, in the absence of candidate Hollen, most libertarians would probably vote for Patrick Morrisey rather than a swamp creature like Manchin.

The Democrats understand this, even if some voters don’t, which is why they and their financiers are paying for illegal mailers and ads. They know the investment will reduce the Republican tally by luring voters to Libertarian candidates who can’t win. And this affects a lot of races not covered above. In Nevada, for example, GOP Senator Dean Heller is hemorrhaging votes to Libertarian Tim Hagan. And, in New Jersey, Libertarian Murray Sabrin will probably save Senator Bob Menendez. This last example should drive the point home — a vote for a Libertarian is a vote for a Democrat who is more than likely also a crook. That really isn’t the goal of libertarianism… is it?