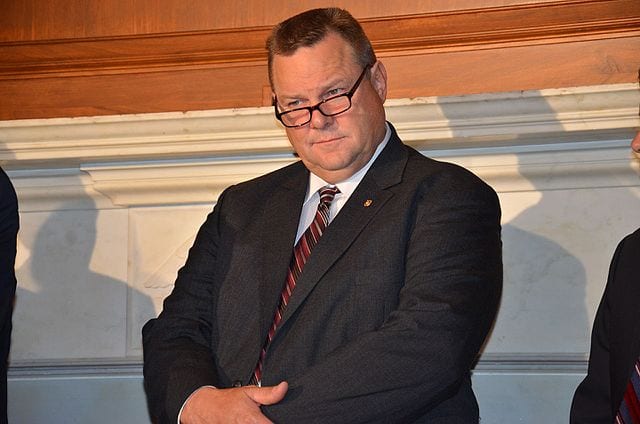 Ever wonder how Senator Jon Tester, a Beltway swamp creature who voted against the confirmation of Brett Kavanaugh and famously stays in lockstep with his fellow Democrats on immigration and gun control, keeps getting elected in a state like Montana? The answer is simple: the Libertarian Party usually nominates a spoiler who siphons enough votes from Tester’s GOP challengers that he wins by the skin of his teeth.

In 2012, for example, Libertarian Dan Cox garnered enough of the vote to allow Tester to eke out a 4 percent win. This year was no different — until yesterday — when Libertarian Rick Breckenridge decided to endorse Republican Matt Rosendale. The Libertarian has been pulling enough support in the polls to enable Tester to slither back to the swamp again. Why did Breckenridge throw his support to Rosendale? AP reports:

The Libertarian candidate in Montana’s U.S. Senate race threw his support behind his Republican opponent Wednesday in a surprise move that came in response to an election mailer from an unknown group that appeared aimed at undermining Rosendale’s support among conservatives.

A similar tactic was used in Tester’s last reelection bid, according to the AP story, and this kind of outside interference in Montana’s election process appears to have been just as offensive to the Libertarian candidate as it was to Rosendale himself:

Breckenridge said in an interview that he doesn’t know the source of the mailer, which promoted him as a “true conservative” and claimed that Rosendale supports using drones to spy on private citizens.… He said it appeared to be an attempt by so-called dark money groups to influence Montana’s election.

This is not Tester’s only PR problem. Having sent out mailers to voters suggesting that he was an avid hunter, it was recently discovered that he hasn’t had a hunting license in years. This damaged Tester’s credibility and made him the butt of more than one joke. Donald Trump, Jr. recently quipped, “That Senator won’t hunt.” Rosendale makes the more serious point that it is indicative of Tester’s transformation into a swamp creature:

We can’t trust him to protect our Montana way of life because he’s now part of Washington. From his million-dollar home to being the number one recipient of lobbyist cash of any U.S. Senator or Congressman, Jon Tester has become everything he ran against 12 years ago.

Soon we’ll be hearing more about Tester the “vote hunter,” as well as the endorsement of Rosendale by Breckenridge. The President will be holding a Saturday rally in Bozeman specifically to campaign on Matt Rosendale’s behalf. There can be little doubt that Trump will get a lot of mileage out of both of Tester’s embarrassments.