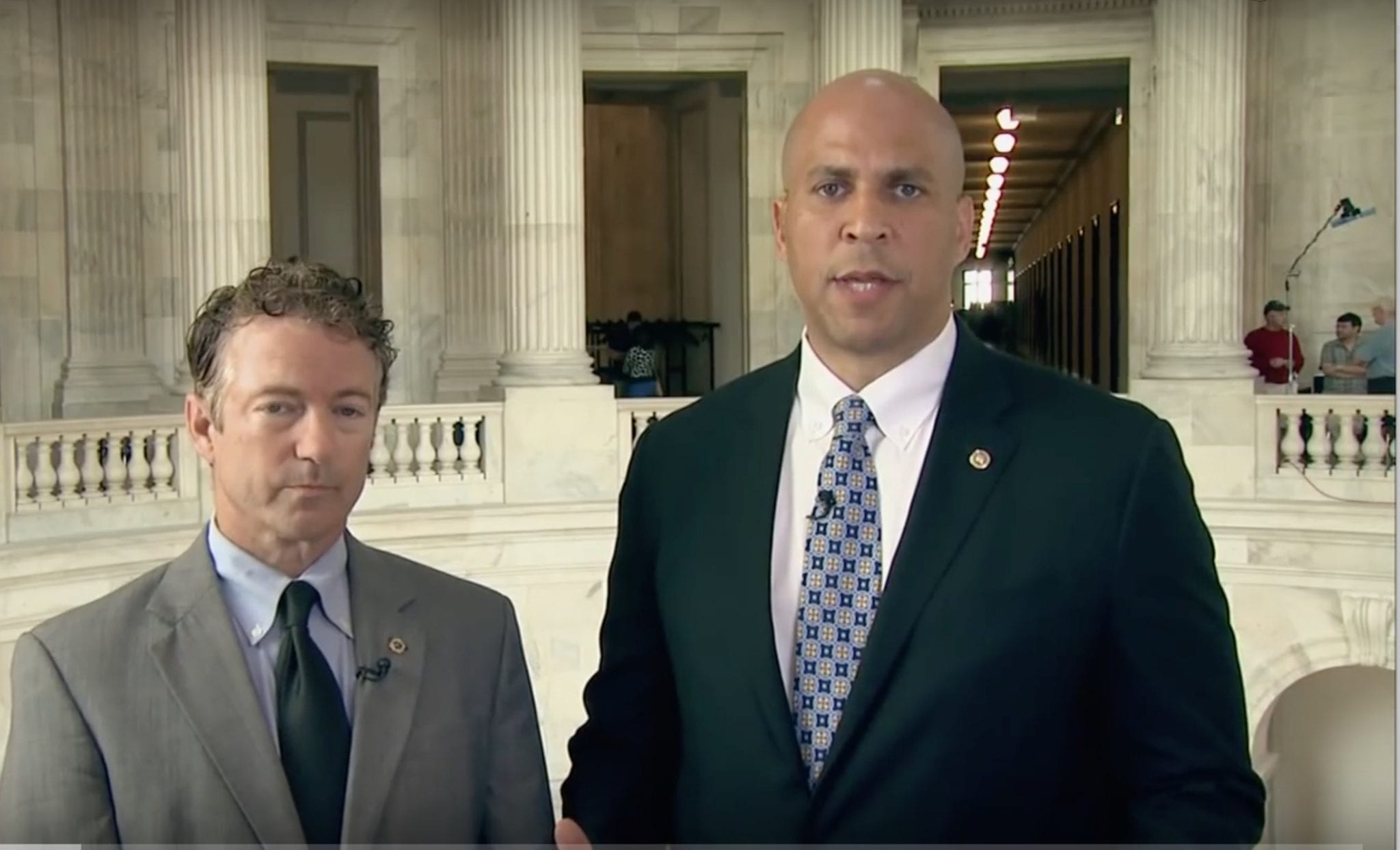 New Jersey Senator Cory Booker has a very interesting view of Brett Kavanaugh’s alleged actions. You might even call this a “Spartacus” moment for the Senator, a member of the Senate Judiciary Committee.

As the world knows, Judge Kavanaugh, 17 years old at the time, is being accused of assaulting a 15-year-old Christine Blasey (now Ford) when both were in high school. Blasey did not report the incident to authorities or apparently anyone else at the time. Thus, no charges were filed much less was Kavanaugh prosecuted. Again, if the charges are true — and there is zero evidence that is the case, not to mention that Kavanaugh not only denies the incident but also that he was even at the party in question — true high schooler Kavanaugh was 17 years old at the time.

As it happens, Senator Booker is a sponsor of something called the REDEEM Act — with the GOP’s Senator Rand Paul. The proposed legislation centers on expunging the records of juveniles convicted of non-violent crimes, thus ensuring some teenage mistake does not follow them for a lifetime. While what Kavanaugh is accused of presumably would be classified as “violent,” again, he was never charged much less prosecuted for this.

But in an explanation of his concern for teenagers who get in trouble, as here at the Senator’s website, Booker says this, bold print supplied:

Studies of youth brain development have found that the decision-making functions of the brain do not fully develop until much later than was previously believed to be the case. Despite this, some states still try 17-, and even 16,-year-olds as adults by default.The REDEEM Act incentivizes states to establish 18 years old as a floor for original jurisdiction by adult criminal courts by allowing preference to be given to Community Oriented Policing Services (COPS) grant applications that originate from states that have enacted similar or stronger provisions.

In other words? If one assumes that Christine Ford’s account is accurate, it happened for one reason — the reason that no less than Cory Booker himself has — truthfully — asserted. Again, that is this:

Studies of youth brain development have found that the decision-making functions of the brain do not fully develop until much later than was previously believed to be the case. Despite this, some states still try 17-, and even 16,-year-olds as adults by default.

In other words? The activities of a 17-year-old Brett Kavanaugh, not to mention 15-year-old Christine Blasey, were the result of immature teenagers whose “decision-making functions” were impaired to begin with because they had brains that were not “fully” developed. Not to mention that if Booker is literally sponsoring legislation that would make it the law of the land to seal youthful criminal records, there is no way that Ford’s 36-years later allegation — when no charges were even filed in the day — should be relevant in the first place.

There is zero evidence — say again zero — that Kavanaugh has ever exhibited this behavior in his adult life. Say again, zero. To the contrary. One woman after another has come forward to describe him in terms of being a gentleman on a personal level and an utter professional in the workplace.

Contrast this with the behavior Democrats are silent about this very minute. Here’s this account — one of many — over at the Hill. The headline:

The article reads in part:

The woman who accused Rep. Keith Ellison (D-Minn.) of emotional and physical abuse is claiming that the Democratic Party “smeared, threatened [and] isolated” her after she went public with the allegations.

Monahan on Monday tweeted that Democrats have not stood by her.

“I’ve been smeared, threatened, isolated from my own party,” Monahan tweeted. “I provided medical records from 2017, stating on two different Dr. Visits, I told them about the abuse and who did it. My therapist released records stating I have been dealing and healing from the abuse.”

“Four people, including my supervisor at the time, stated that I came to them after and shared the exact story I shared publicly, I shared multiple text between me and Keith, where I discuss the abuse with him and much more,” she wrote. “As I said before, I knew I wouldn’t be believed.”

As of this writing, there has been radio silence from Senators Dianne Feinstein, Chuck Schumer, and Dick Durbin. And perhaps there is no surprise.

With then-President Bill Clinton accused by Juanita Broaddrick of rape (while he was Attorney General of Arkansas and the Democratic nominee for governor), and sexual assault charges made against Clinton by Paula Jones (while Governor) and Kathleen Willey (while President) — Senators Feinstein, Schumer, Durbin, and Patty Murray all voted against impeachment charges. Now — right this minute — they have fallen silent as church mice on the Ellison matter, the woman accuser be damned.

Let’s cut to the chase. This is all about abortion. Roe v. Wade. A whole other world of discussion about the role of courts in the Constitution.

But without doubt? Take the name “Brett Kavanaugh” out of the equation and what you have is a thorough-going defense by Cory Booker of the scientific reality that 17-year-old teenagers are working with undeveloped brains and thus are immature in their decision making. And because of this their subsequent lives should not be impacted unfavorably, let alone ruined.

But if the name Brett Kavanaugh is the 17-year-old teenager in question? All bets are off. The move is on, with Cory Booker as a leading participant in the latest high-tech lynching, to destroy Kavanaugh’s entire life and ruin him personally and professionally forever.

But Bill Clinton? Keith Ellison? Not to mention Senators Ted Kennedy and Chris Dodd and their drunken assault on a waitress, as detailed here in a 1990 Gentleman’s Quarterly. Like Keith Ellison today, all were far from teenage years when they did what they were accused of doing. But no matter. The Cone of Silence descends on Democrats, as it did then and is now on Feinstein, Schumer, Durbin, and Murray.

In fact, in the Clinton-era? There was a brand new organization that came to life based on the left-wing principal that Democrats accused of rape and sexual assault must be left alone. You know the name.