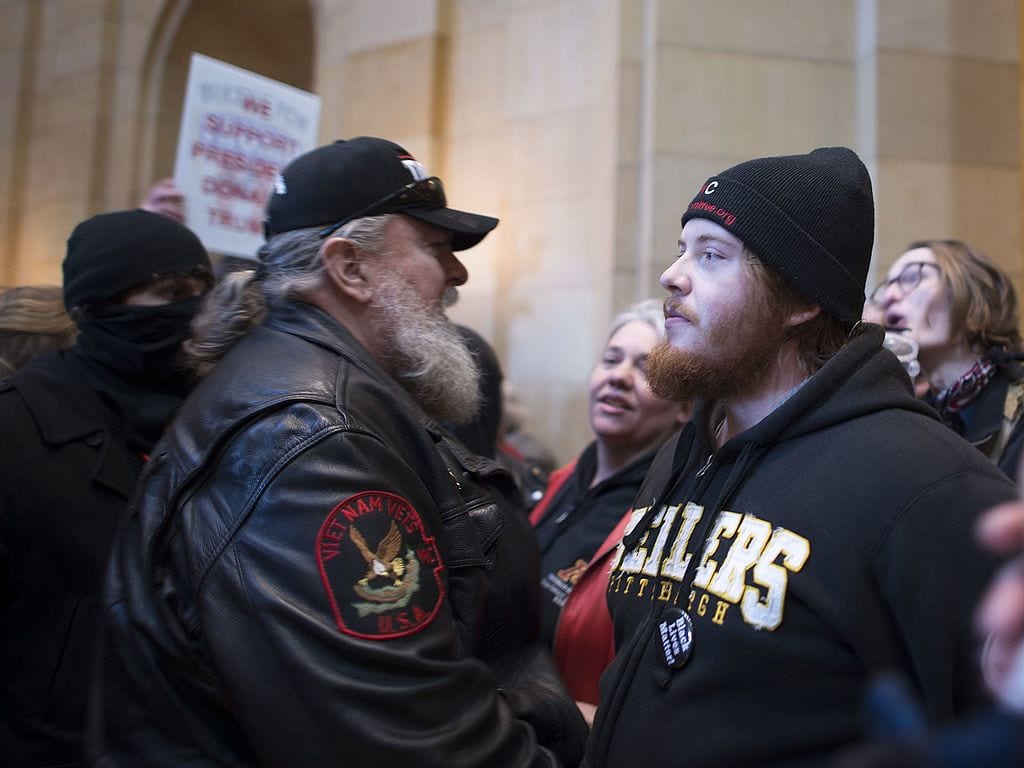 The last several weeks and months Democrats have demonstrated for all to see what a radical party they’ve become. The left wants 70 percent tax rates, an end to the First and Second Amendment rights, massive new government spending, an end to fossil fuel production, a government takeover of the healthcare system, an end to the Electoral College so they can win more elections and make states irrelevant, open borders, free everything, abortion on demand, impeachment of Donald Trump, and on and on.

Moreover, the ideological split in America between the values and economic operating systems of red states and blue states is more pronounced than an anytime in 150 years. It is as if we were two nations today: Red State America and Blue State America. Can we continue to coexist as one nation? We now live in a country in which blue state America believes Trump is an illegitimate president and where states like California toyed with the idea of secession. If Trump wins again (which I believe is likely) the anger and rage on both liberal coasts could turn into violence. Red state America will be just as frightened and rebellious if our next president is another far left liberal like Barack Obama — or worse.

Today, in most of the South and the Mountain States — red America — liberal Democrats are virtually nonexistent in state government. In blue America — California, Connecticut, Illinois, Massachusetts, New Jersey, New York, Rhode Island — Republicans have been just about wiped off the map. Blue state America has virtually eliminated conservative voices from the town hall and the state capital. Today there are only two states that have a divided legislature.

What if we arrived at a point where a solid majority of Californians truly wanted independence (and perhaps states like Washington and Oregon sought to join them)? Should they have the moral and constitutional right to do so? Would the other states ever impose military control over Californians to keep them in the union?

The standard response is this issue was settled during the Civil War. Really? What the Civil War proved was that the North had more military might (and a morally superior position) than the South — so it was able to impose its will over the rebel states. But now we are coming close to another polarizing split with irreconcilable differences. This time it is not over the issue of the evils of slavery, but whether we want to be a socialist or free-market capitalist nation.

How do we resolve the seemingly inevitable conflict in ways that preserve the union but also ensure that the government has the consent of the governed? The left’s attitude today is that the country is being run by a bunch of uneducated Trump supporting “deplorables.” If only we could hand the reins of government back to the elites who were educated at Harvard and Yale, and not these yahoos who appeal to people from West Virginia and Alabama, America would just be fine.

The most efficacious path forward, short of a constitutional convention that allows states to secede from the Union — Brexit solution — would be to return to the founding fathers’ vision established by the Constitution that returns power to the states. The 9th and 10th amendments in the Bill of Rights reserve all rights not explicitly assigned to the federal government “to the states and the people.” Nowadays we have laws like Obamacare, a federal Department of Education (education is not mentioned in the Constitution as a federal responsibility), the feds regulating everything from traditional marriage to what kind of light bulbs you can put in the lamp in your bedroom.

We have strayed far and wide from that founding principle of states’ rights.

Our nation’s laws are now determined by the tyranny of the majority — which is exactly the opposite of our founding principles.

A reinvigorated emphasis on federalism would restore the sovereignty and home rule of the states. This would allow Americans to self-select where they live. States would have home rule, but of course they would have to comply with the legal protections of U.S. citizens embedded in the Constitution. But if you want drugs legalized, sanctuary for illegal immigrants, government-run healthcare, abortion on demand, and an end to fossil fuels, high taxes on the rich, move to California. If you want low taxes, right to work laws, prayer in school, a patient-choice system of free market health care, move to Texas or Tennessee.

We would have one America with many systems of governing rules at the state and local level.

Conservatives would not have any problem with blue states having expanded rights to do pretty much whatever they wanted. Liberals would greatly resist red states from having such rights. That is true a) because liberals believe in big centralized government having authority over the citizenry (they are more elitist and authoritarian), and b) because they know that the low tax, less regulation, right to work, economic freedom model of the red states would economically crush blue states that want to ramp up socialism.

By the way, if “progressives” are so smart, why are so many millions of Americans fleeing from progressive states — California, Connecticut, Illinois, New York, New Jersey, Rhode Island, and so on?

Stephen Moore is an economic consultant with FreedomWorks and a coauthor of Trumponomics: Inside the America First Plan to Revive Our Economy.