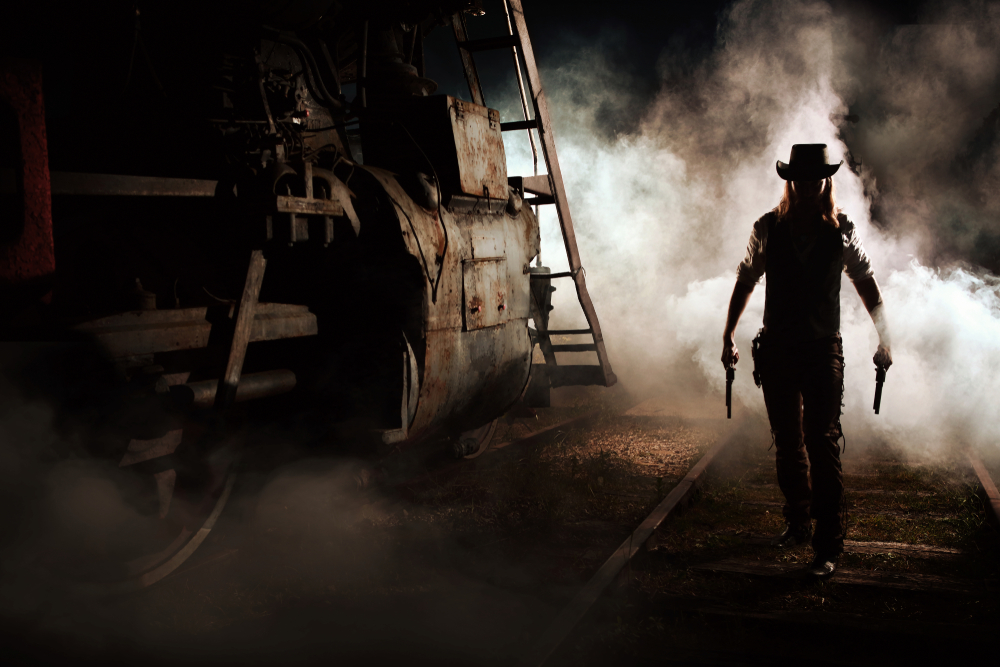 As the Union Pacific railroad pushed the tracks of the first transcontinental railway westward across the plain, “Hell on Wheels” moved westward with it. Hell on Wheels was the name of the town that sprang up where all the workers were, at the head of the rails. It got its name from the near-complete lawlessness that ruled as laborers far from any home were catered to by those selling them what they wanted, which included lots of alcohol, lots of gambling, and lots of feminine company.

Journalist and adventurer Henry Stanley followed the railroad building only a few years before he went off to Africa. He reported,

Most everyone seemed bent on debauchery and dissipation…. There are men here who would murder a fellow creature for five dollars. Nay, there are men who have already done it. Not a day passes but a dead body is found somewhere in the vicinity with pockets rifled of their contents.

Wallace Stegner, historian and storyteller of America’s West, wrote of Americans as “boomers” and “settlers.” The settlers build communities of connection, invested in their families, in their faith, in their neighbors and friends, and in the welfare of a series of concentric circles of connection and unity, ultimately including the entire country.

Boomers, on the other hand, are committed to nothing more than following the boom. They have no commitments or community other than that. They ran to the Gold Rush, they ran after the railroad, and they continue to run after whatever promises quick and easy good times. All else is sacrificed to that pursuit.

The coming of the transcontinental railroad and the transportation evolution it heralded created all kinds of boom opportunities. Like the Hell on Wheels at the end of the rails, these opportunities would stay a little while and then move on, leaving little lasting in their wake. Gamblers, grifters, and old-style gangsters took advantage of the new places that seemed beyond the reach of law.

Slightly more respectable boomers were there as well. The buffalo hunters came and shot down the herds, then disappeared themselves when their boom reduced the buffalo population to barely over 1,000 animals in a 1903 count. The bonanza farmers came and farmed the semi-arid high plains, booming during a decade of unusually high rainfall. When more normal rain patterns returned, the farms went belly-up.

Chaos regularly provides rich opportunity for boomers waiting on the main chance to come by. The chaos of defeat and reconstruction in the South gave Nathan Bedford Forrest the chance to conduct a temporarily successful guerrilla war against the guarantees of freedom and civil rights established for black people in the wake of the Union’s victory in the Civil War.

Chaos opportunism resurfaced with a vengeance in 21st-century America. “You never want a serious crisis to go to waste,” said Rahm Emanuel, then chief of staff for Barack Obama. If he still believed in that strategy when he became Chicago’s mayor, it certainly didn’t help the murder rate.

But the boomer isn’t much interested in what works for others. Stability and the health of settled communities finding their way to live peacefully and well with all other community members — those things are of little interest to the boomer.

The boomers of today are as oblivious to how they pollute the world of ideas and the world of relations as the boomers of the 1800s were unaware of the damage they were doing to the natural world they so exploited. They follow a boom idea and ignore the subtleties of the long growth of communities discovering and respecting each other’s humanity, the patience required to truly grow, the forbearance and forgiveness that must be given at time and again.

Instead, the boomers of today have one or two ideas, which make it unnecessary for them to have to understand anything else. Every difference with others must be the result of their chosen cardinal sin, which they will call racism but which in fact is simply any difference of any sort that makes the boomer feel uncomfortable.

The modern boomers found rich opportunity in the chaos of racial tension, which began to spike in earnest during Obama’s second term. The narrative behind “Hands up, don’t shoot” turned out to be a fabrication, but those seeing their main chance in racial anger insisted that so much the worse for the truth.

The chaos just kept on coming, with those riding the wave gambling that the settlers will just pretend all is well if we mess with the settled system in a deep way. And certainly they have had a boom, with most settlers finding it difficult to believe that the Constitution could be so gutted by high officials sworn to its support. The full tale has yet to be told in the camp of the settlers.

The year 2020 marked the ultimate opportunity, with the chaos of a plague providing cover for an assault on free speech and free thought that would have made Joe McCarthy green with envy. And that lockdown on political speech cleared the way for the man who has probably peddled influence on the grandest scale in our history to dodder his way into the White House.

Boomers do lots of damage. We can’t care well for the things of which we are mindless, and locked in their narrow ideology, they are mindless of most of what makes living together possible.

Sometimes their damage is irreparable. The passenger pigeon flocks used to provide food for the poorest. A large community of free black people lived on Staten Island in the early 1800s on the rich oyster beds that provided everyone delicious nutrition. The passenger pigeons were hunted to extinction, and no oyster anywhere in New York Harbor has been safe to eat for over a hundred years.

But other damage is reversible. While there are no million-strong herds of buffalo, they are being farmed sustainably and in growing numbers. Poisoned rivers have been returned to health; the fresh Delaware shad that I enjoyed as a kid but then were banned for human consumption are now safe again and as tasty as ever.

More importantly, those who are interested in a settled and peaceful America are aware and awake in growing numbers to the irresponsibility of today’s boomers of the mind and spirit. They know that wells of our national community have been poisoned by the opportunists’ reckless pursuit of political thrills.

It is not too late to stop the poisoning and to heal the sickness it has caused to our body politic. Be mindful. Increase goodness and light. Call out the sickness for what it is and seek its healing.

“Peace, peace, for the far and the near,” said the Lord, “and I will heal them.”